First devised at the University of Tennessee, body farms have become invaluable research facilities for everyone from scientists to law enforcement officials. 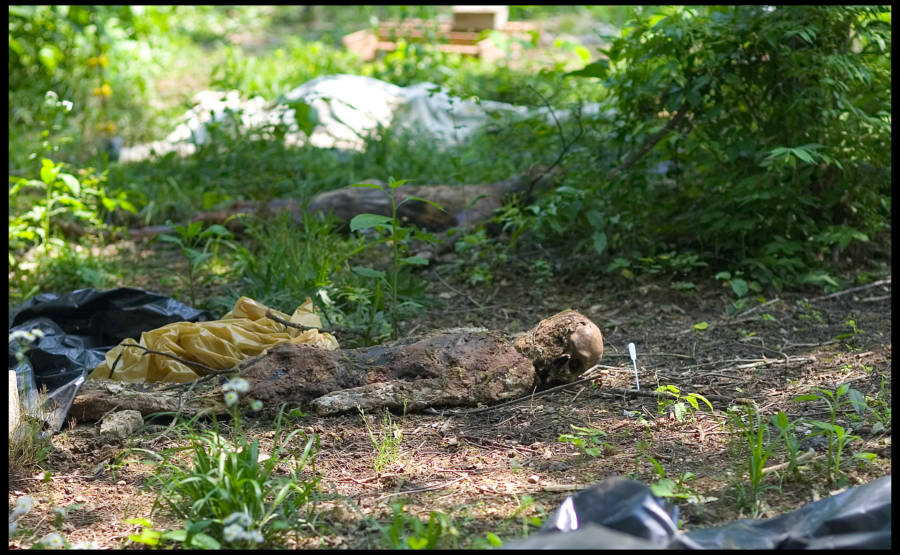 David Howells/Corbis via Getty ImagesCorpses decay at the body farms at the University of Tennessee.

What do you think happens to your body after you die? You probably have a vague idea, but not a thoroughly realistic conception of the changes your body will undergo after the chilly grip of death has taken hold.

You are not alone. Most people possess very little understanding of the grisly process of human death and decay. In fact, we go to great lengths to keep death and its aftermath out of sight and out of mind.

Just in the United States, about 70 percent of people now die in hospitals, nursing homes, or long-term care facilities, instead of in their homes. And once we’ve died, our bodies are preserved and coated in makeup if there’s going to be a viewing at all, then usually either cremated or buried in a coffin deep underground.

Now, even with this ritualistic practice of concealing death, the human body still endures the process of decomposition, it is simply delayed for a short period of time. And as much as we try to keep this decomposition at bay and out of mind, there’s a subset of scientists who study it intently and up close at facilities called body farms.

These forensic scientists and anthropologists working at body farms are trying to understand more about how the human body breaks down after death so that they can use this information to do things like help solve homicides and even investigate genocides — any situation where we seek to know things like how, when, and where a person died.

Yet even for these scientists that devote their lives to this kind of work, some aspects of human decomposition remain a mystery. And to help scientists unlock these mysteries, body farms have continued to pop up over the past few decades.

The Birth Of Body Farms 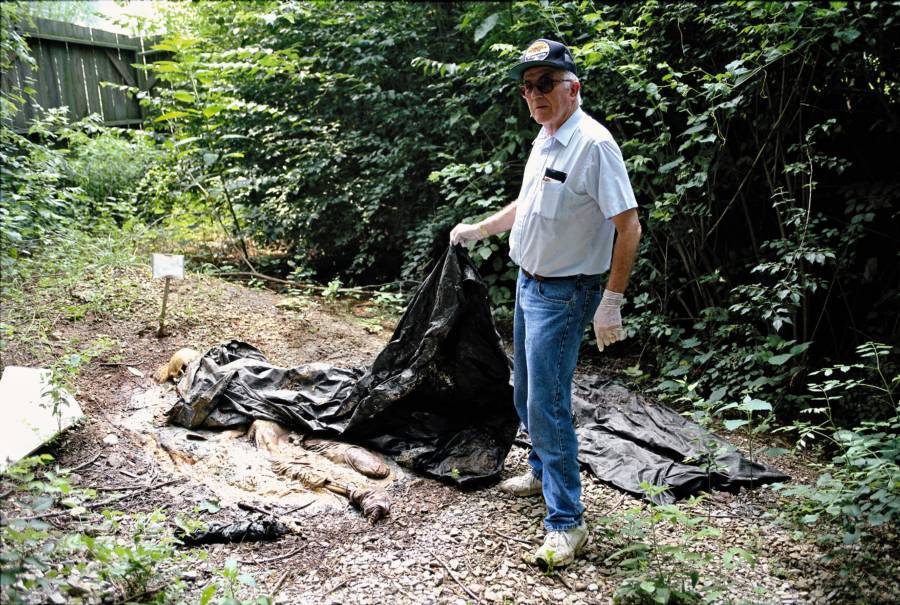 John B. Carnett/Bonnier Corporation via Getty ImagesWilliam Bass checks on the progress of a decaying body at the University of Tennessee’s body farm in 1997.

Before the advent of body farms in the early 1970s, forensic scientists consulting on criminal cases had to rely on research that was conducted largely on the carcasses of pigs (physiologically similar to humans, relative to other animals). And even now, many countries outside the U.S. still utilize pig carcasses for such research.

But in 1972, one man named Dr. William Bass radically altered the field of forensics when he founded the very first body farm at the University of Tennessee in Knoxville.

Bass came up with the idea for body farms around the time he was asked to consult on a local case. The police had noticed that the Civil War-era grave of Col. William Shy had been recently disturbed and the corpse inside looked surprisingly fresh. They suspected that someone had recently been murdered and then placed in this old grave in order to cover up the crime.

Bass noted the body’s still-pink flesh and informed police that he indeed believed that the Civil War-era corpse had been swapped for a recent body, one dead less than a year.

He was wrong. Further analysis of the dead man’s teeth and clothes showed that this was indeed William Shy, his body preserved thanks to embalming and a tightly-sealed iron casket.

Considering that Bass was off by more than 100 years, he knew that much more study was needed on the topic of human decomposition. Body farms were the answer.

Bass’ body farm started on a 1.3-acre plot on university land, where researchers would leave human bodies donated to the facility out in the open to decay under various conditions so that the results could be observed and tracked.

Since then, about half a dozen similar body farms have opened in other areas of the United States, including one at Western Carolina University, another at Southern Illinois University, and the world’s largest at Texas State University’s Freeman Ranch.

What Exactly Happens To The Corpses At Body Farms?

Between America’s various body farms over the years, thousands of corpses have decayed under the watchful eyes of researchers. At the University of Tennessee alone, there have been more than 1,800 with 1,700 skeletons also donated, and 4,000 people who’ve signed up to donate their bodies once they’ve died.

And what happens to all these bodies after they’ve arrived at the body farms?

Procedures can vary slightly, but at Texas State (which Vox visited in 2015), the process goes like this: First, researchers take measurements and photographs, as well as hair and blood samples. Then they assign the body an identifying number, bring it out to the grounds and place it there, at least a few feet away from any other nearby bodies (there are about 50 laying out at any one time).

Now, it’s not quite that simple. The researchers will deposit the body (usually naked, but not always) in a specific location according to the kind of research they seek to do. Sometimes bodies are left in the open sun to observe the effects of that, other times in the shade, or in high grass, and so on. Researchers sometimes place bodies under cages to prevent opportunistic creatures like vultures from interfering (intruding humans never have), but bodies might also be left out so that the staff can observe the effects of those creatures. 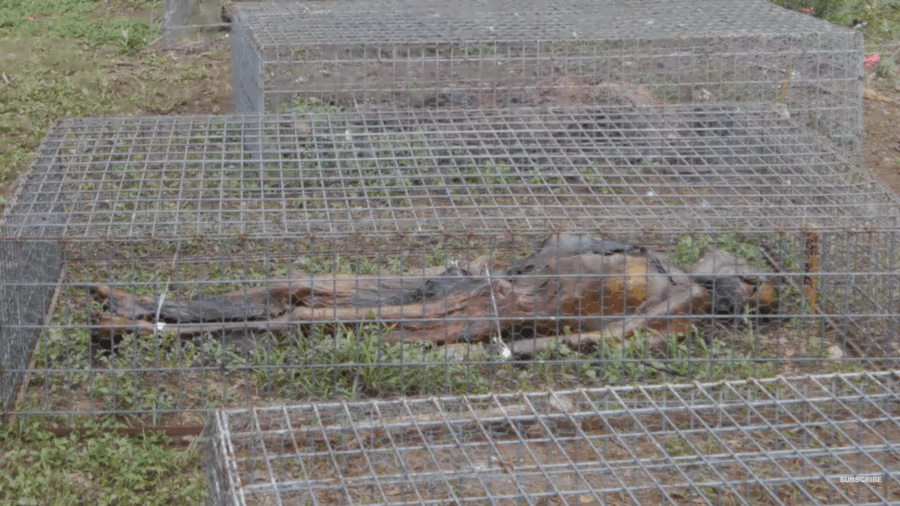 Vox/YouTubeA body sits underneath a cage at the Texas State body farm.

Furthermore, researchers might position the bodies in specific places, the kinds of places where police might find a body in a real-life homicide case. For example, corpses on body farms might be left in water tanks, tied to trees, or even placed in car trunks.

Meanwhile, a weather station monitors all relevant factors including temperature, humidity, and so on, while the researchers monitor the bodies’ decomposition closely.

How The Human Body Decomposes 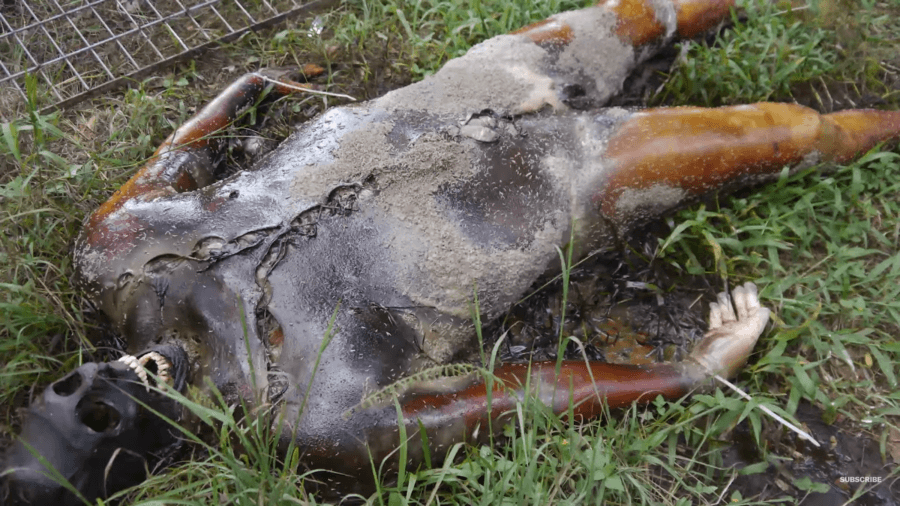 The big question — the one that fueled the creation of all these body farms in the first place — is what happens to the human body as it decomposes? The answers can vary based on the precise factors (temperature, flora and fauna, etc.) that the researchers have taken into account, but the basic process is consistent.

When a person first dies, the fluid inside of their cells leaks out and the bacteria begin feasting immediately. The bacteria subsequently convert the liquids and solids inside of the body into gases that cause the body to bloat.

In this stage, reached within a few days of death, the body can swell to almost twice its previous size. Meanwhile, the bacterial production of sulfur also gives the body a strange, yellowish color, part of a process called “marbling.”

It’s then that flies arrive and lay eggs that will hatch into maggots that proceed to consume the flesh. The maggots tend to start with the face, which can lead to, as Vox wrote, “a shriveled, blackened skull with carved-open features attached to a still-swollen body.”

Then, about three days after death, the body enters the purge stage. As the body shrivels, it leaks out fluids so rich in nitrogen that it can kill off the surrounding grass and leave the area black.

Afterward, maggots and bacteria will have consumed all of the flesh within a few weeks. This leaves behind a corpse that dries out to the point that, at six months after death, all that remains are bones, cartilage, and skin, Vox wrote, “that could be mistaken for dirty clothing.”

What Researchers Have Learned From Body Farms 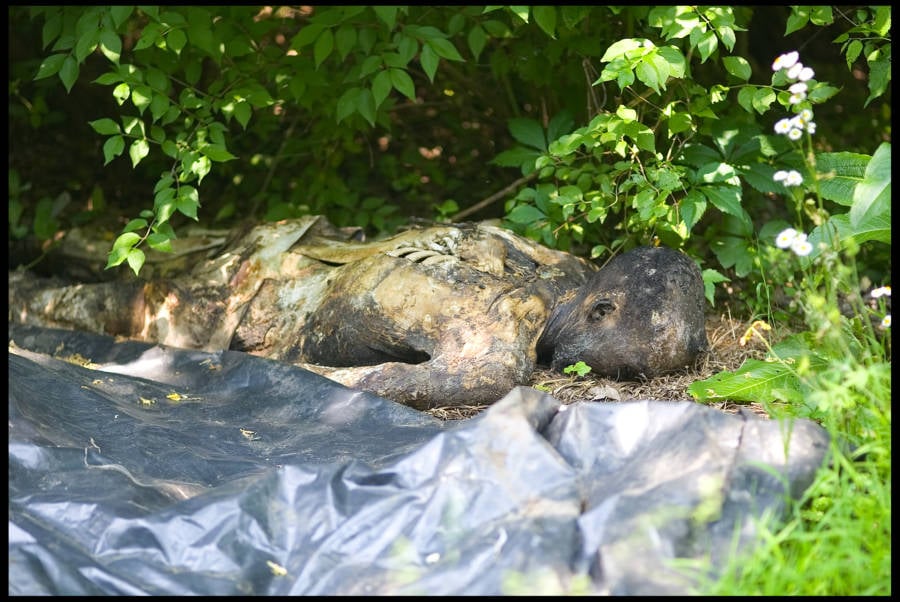 David Howells/Corbis via Getty ImagesA body decays at the University of Tennessee facility.

Before body farms, researchers didn’t have a chance to observe and monitor the kind of human decomposition described above in the way that they can now. And in addition to helping researchers determine the specifics of the very decomposition process described above, body farms have allowed scientists to learn a number of things that are both fascinating and useful in police investigations.

For example, researchers have developed better time-of-death estimates based on gases being emitted from the body, which are released in a particular pattern over time. Additionally, researchers can now better determine the environmental conditions that accompanied someone’s death and whether or not that person was wearing clothes, for example. They’ve seen bodies clothed and unclothed decompose in various environmental conditions and they know what happens to the body in each case.

Breakthroughs made at body farms can even help authorities find missing bodies. Body farm scientists have determined the specific kinds of chemicals that accumulate around dead human bodies and, if you can find those chemicals, perhaps you can find the body.

Furthermore, researchers have used body farms to understand the sort of food chain, called a necrobiome, that comes into play when a human body decomposes. For example, the bacteria that feed on the body can attract certain insects, which become prey for mice, which become prey for creatures like snakes, and so on.

And though humans have obviously been dying and decomposing for thousands upon thousands of years, it’s only in the last few decades that we’ve constructed the body farms that have allowed us to make essential scientific breakthroughs like these.

After this look at body farms, discover more about what happens to your body when you die. Then, check out the most interesting facts about the human body.