The woman's remains show four projectile points, three in her chest and one in her ribs, and were buried with a 24-week-old fetus. 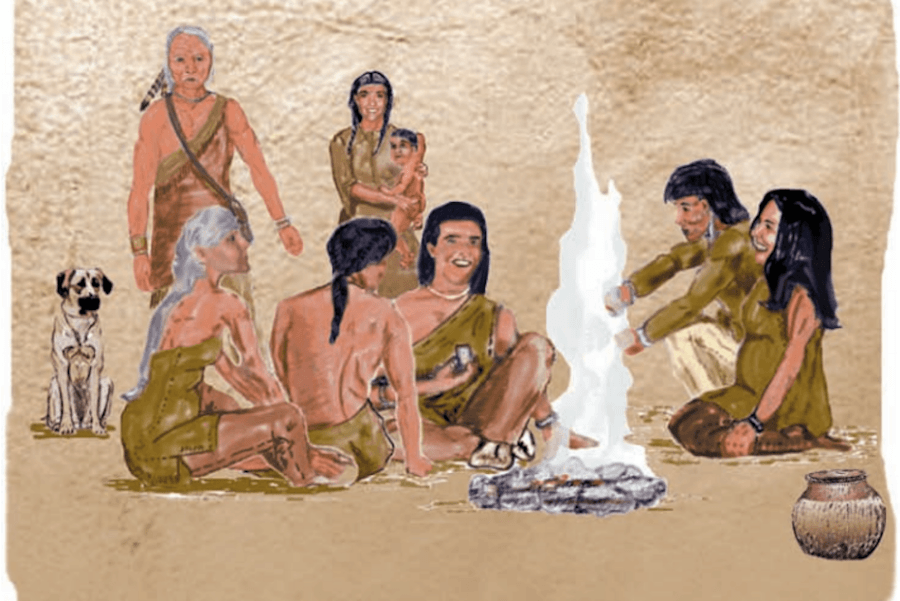 Not much about the burial of pregnant women from prehistoric times can be found in current archaeological literature, but one researcher hopes to offer a stepping stone in that direction.

Forbes reported that bioarchaeologist Robyn Wakefield-Murphy examined the skeletal remains of a young pregnant Native American woman who was shot and killed by four arrowheads.

The woman’s grave was found in the 1950s at the Shippenport Site, an excavation project in southwestern Pennsylvania, but her gravesite hasn’t been closely analyzed until now. Researchers believe that the Shippenport area was part of a Native American Monongahela community, dating to around 1050 to 1635 AD. Bones from the site are now housed at the Carnegie Museum of Natural History in Pittsburgh.

The woman was found with 30 beads made from bone around her pelvic region and 44 shell beads around her neck. Wakefield-Murphy was drawn to the female skeletal remains after closer examination of the bones showed three projectile points in the woman’s chest as well as another point embedded in her left rib that likely came from arrowheads.

“It is possible she was the unfortunate victim of a raid. Other ideas include a ritual killing of a woman taken from another group,” Wakefield-Murphy, an assistant professor of anatomy at New York Chiropractic College, told Newsweek.

Although these are likely theories, the latter would be difficult to prove without a DNA test, which would be destructive to a Native American grave, she noted.

On top of the woman’s violent death, Wakefield-Murphy found another surprise: The victim was likely pregnant when she was killed.

The remains of a 24-week-old fetus were found buried along with the Native woman’s body, which itself was buried outside the village underneath a tree — breaking with the Monongahela tradition of burying the deceased inside the confines of the village that was walled by sharp wooden stakes. The bone and shell beads were also an anomaly; Monongahela were usually buried without many grave goods.

Wakefield-Murphy hypothesizes that the odd burial was likely due to her unexpected demise while she was pregnant. So far, not much is known about the native Monongahela people.

Based on past excavations, scientists established that they occupied parts of Pennsylvania, West Virginia, Ohio and Maryland from about 1050 A.D. into the 1630s.

The name “Monongahela” was given by researchers in the 1930s, but experts have known about them since the 1800s. The name comes from the Monongahela River, which snakes from northern West Virginia up to Pittsburgh. Unlike other Native American groups, researchers have yet to establish what exactly happened to the Monongahela people after the Europeans invaded America.

“We have no idea what happen[ed] to them,” John Nass, director of the California University of Pennsylvania’s anthropology program, told PhillyVoice. “They basically vacate[d] this part of the state, but we don’t know where they relocate[d] to.”

In terms of burial traditions, the Monongahela buried their deceased in an empty space — akin to a town square — in the middle of their village. Sometimes children were buried underneath their houses. But no other Monongahela grave that has been found shares the unusual traits of the pregnant Native woman’s grave.

Wakefield-Murphy believes the strange grave’s unusual placement was a grieving response to the loss of two previous lives.

“The specialized nature of the burial is thus a product of greater societal grief invested in the unexpected loss of not one but two members of the community,” the researcher wrote in her study’s poster, presented at the American Association of Physical Anthropologists conference.

With her finding, Wakefield-Murphy underscored the importance for researchers to expand the scope of their work to that of maternal-fetal burials. “In prehistory, childbirth-related deaths were by no means rare events,” but their rarity in archaeology may be the result of biases in excavation or preservation.

She noted that archaeologists should look for graves in unexpected places, since maternal-fetal deaths were historically given special mortuary treatment outside of the community’s burial tradition. Hopefully, similar discoveries will be found that can bring more light to the stories of these women from the past.

Next, read the story of the 3,700-year-old remains of a pregnant Egyptian woman who died in childbirth. Then, learn about the Native American man with the oldest American DNA ever recorded.