Meet Ned Kelly, The ‘Australian Robin Hood’ Who Faced Down 40 Police Officers With Just A Pistol And Makeshift Armor

Though he was a notorious thief and cop killer, Ned Kelly became something of a folk hero to Victoria’s poor in the late 19th century, a controversial image that persists to this day.

On June 28, 1880, the police in Glenrowan, Australia, believed they had finally caught a notorious outlaw named Ned Kelly. The criminal had shaken up Australia with a series of armed burglaries and was wanted for murdering three officers in 1878. Now, the so-called Australian Robin Hood was trapped in a hotel holding several hostages and surrounded by authorities.

But seeing as Kelly was no ordinary criminal, however, he had one more trick up his sleeve. 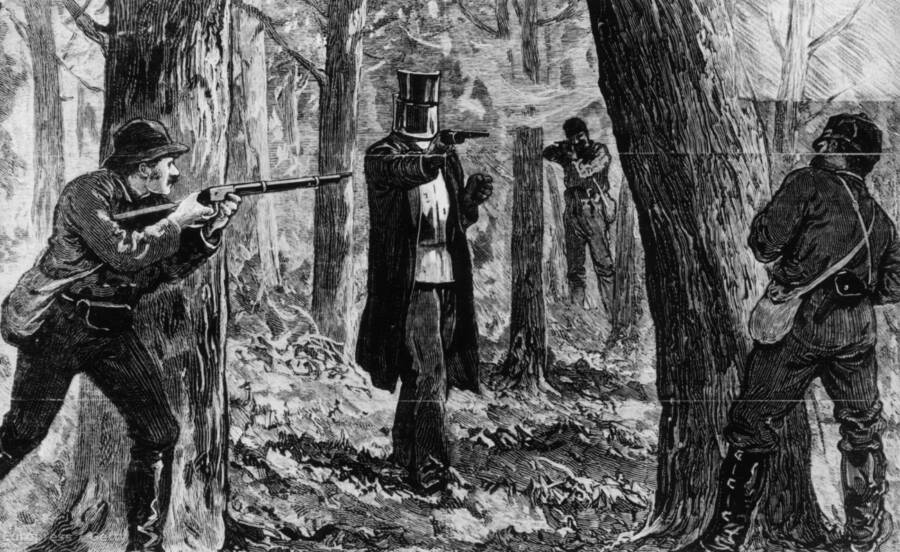 Using iron plowshares he had stolen, Kelly fashioned himself a makeshift suit of armor and emerged from his hideaway at dawn, armed with only a pistol. Well-versed in the art of evading police and vanishing into the Australian bush, Kelly let the early morning fog shroud his movements as he crept up to the line of 40 policemen waiting to catch him first. Kelly fired.

A local paper reported that “many shots hit him, yet he always recovered himself, and tapping his breast laughed derisively, as he coolly returned their fire.”

The police eventually learned to shoot Kelly in his legs where he was not wearing armor, but not before Kelly blew the helmet off the commanding officer’s head. Those who survived the shootout thought Kelly was an apparition, the Bunyip bogeyman of Australian legend — or the devil himself.

Edward Kelly was born in June 1855 in Beveridge, or what was then known as the Colony of Victoria. He was the third of seven children, one of whom died as an infant.

The Kellys had arrived in Australia in the same manner as many others back then, namely their patriarch, John, was a convicted prisoner sent to the remote continent as punishment in 1841.

After serving seven years for stealing two pigs, John moved to the Port Phillip District of Victoria, where he found work on the farm of James Quinn and a wife in the man’s daughter, Ellen. After the couple married in 1850, they bought a plot of land in Beveridge to start a family and became gold prospectors there. Unfortunately, they didn’t prosper. John consequently became a heavy drinker. 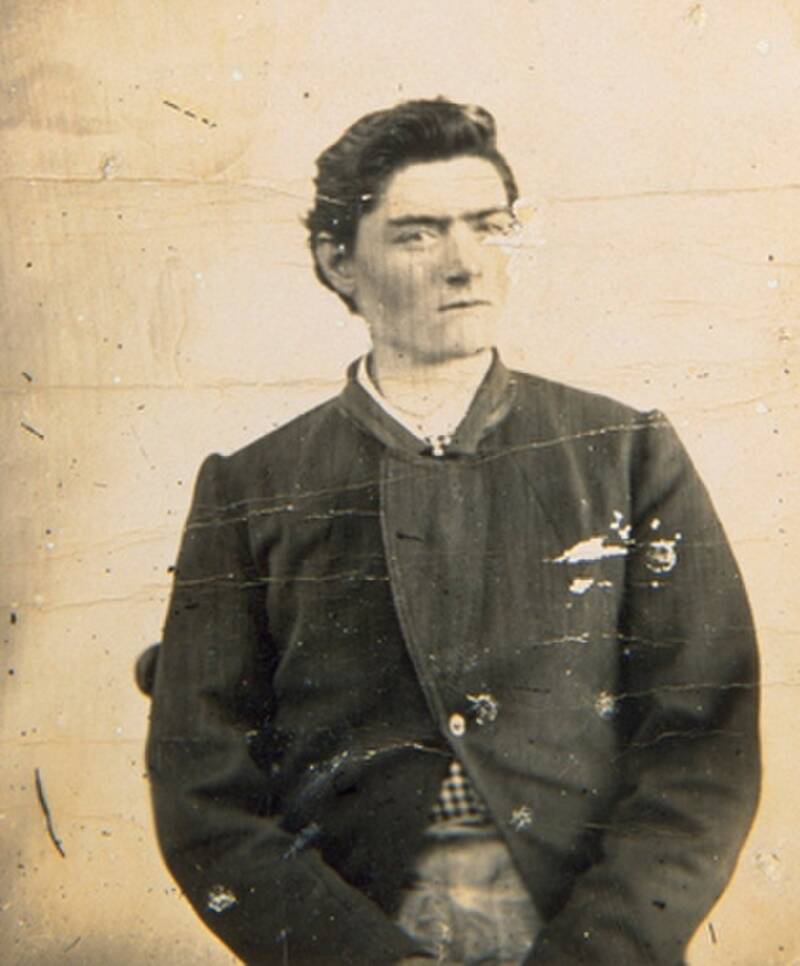 The Kellys also endured struggle because they were a “selector family,” which were groups of people who had been chosen by the British Crown to inherit land in Australia. Unfortunately for the Kellys, most large tracts in Australia had already been claimed by that time by squatters, or settlers, who had reached the continent earlier and made large profits off of the properties they claimed.

The conflict between these groups, the selectors and the squatters, defined much of Australia’s social problems for the ensuing decades, and the Kelly family was no exception.

After serving six months of hard labor for stealing a calf in 1865, John tragically drank himself to death and died on Dec. 27, 1866, leaving Ned Kelly to provide for his large, destitute family.

Kelly rapidly resorted to a life of crime in order to support them, and his campaign of robberies and thefts would enrage law enforcement for years — as Kelly consistently evaded justice.

The Epic Rise Of The Violent Kelly Gangleader

Widowed and indigent, Ellen Kelly moved her family to a hut at Eleven Mile Creek in northern Victoria where her father owned 25,000 acres. But it wasn’t long before trouble began in 1869, when 14-year-old Ned Kelly was arrested for assaulting a Chinese man. 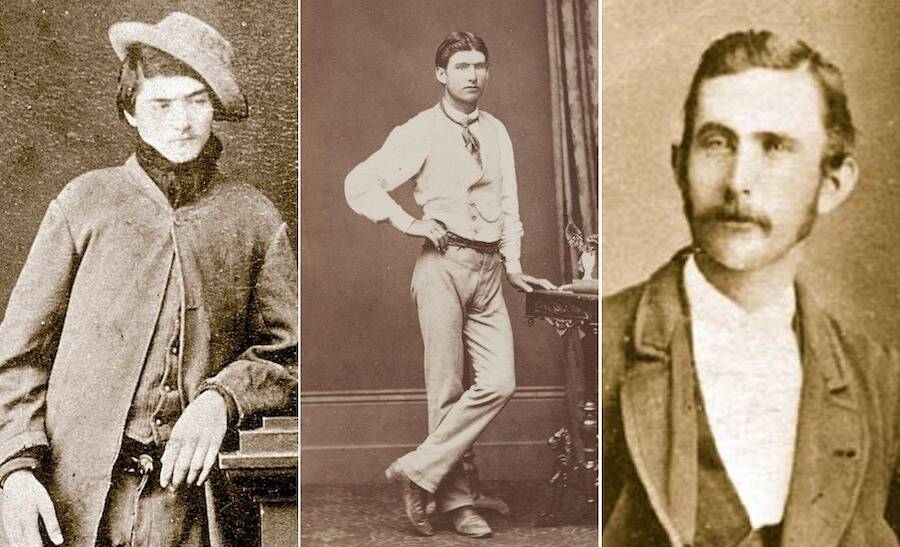 While the charges were dismissed after a 10-day stint in jail, Kelly found even worse trouble the following year when he became the accomplice of Harry Power, an infamous bushranger under whose tutelage Kelly learned how to successfully flee from police and use the bush to his advantage.

To Kelly’s chagrin, being an accomplice of Power’s landed him in jail for seven weeks until the charge was once again dismissed. Seemingly accustomed to never seeing an accusation stick, Kelly continued to resort to crime. Finally in 1870, he was sentenced to six months.

Given three years for possessing a stolen mare soon after and discharged in 1874, Kelly did honest work in timber until he joined his stepfather in horse theft in 1876.

On April 15, 1877, however, Kelly was forced to go on the run once more when he and his brother Dan shot a trooper named Fitzpatrick who tried to arrest them for horse theft. Ellen was imprisoned for her involvement in the crime, and Kelly swore to avenge her. 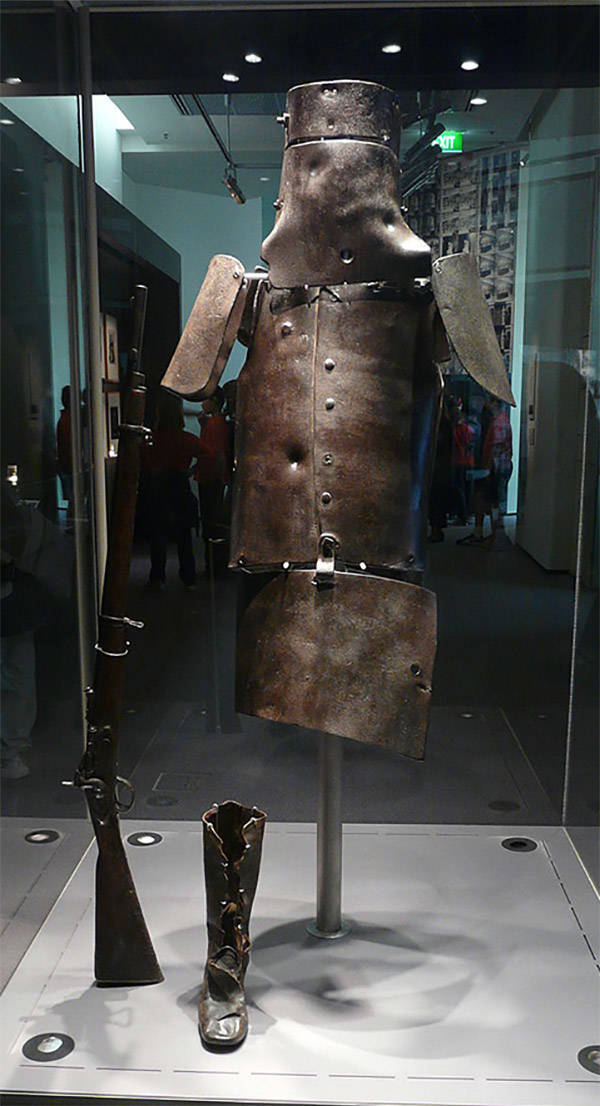 Wikimedia CommonsKelly’s armor on display in the State Library of Victoria.

The brothers retreated into the bush. When three officers succeed in locating them, one of them was shot by Kelly for reaching for his gun, and the brothers killed two more officers for not surrendering.

They retreated again into the shadows where they were joined by two friends, Joe Byrne and Steve Hart. The devious trio then formed the Kelly Gang and launched a crime spree that saw banks, police stations, and local farms robbed.

Finally, the police retaliated with a staggering £8,000 bounty and arrested 23 of the Kelly Gang’s friends and sympathizers without cause. For selectors like Kelly and his associates, these actions only compounded their attitude towards police and Australian authority, who they believed discriminated against the poor.

Kelly published these woes in an 1879 pamphlet known as the “Jerilderie Letter.” In the 56-page document, Kelly justified his actions on the grounds that the Irish Catholic and poor of Victoria were oppressed by their leaders.

The letter made Kelly a folk hero, but he wouldn’t earn his mythical status until his final showdown in June 1880.

The Death Of Ned Kelly 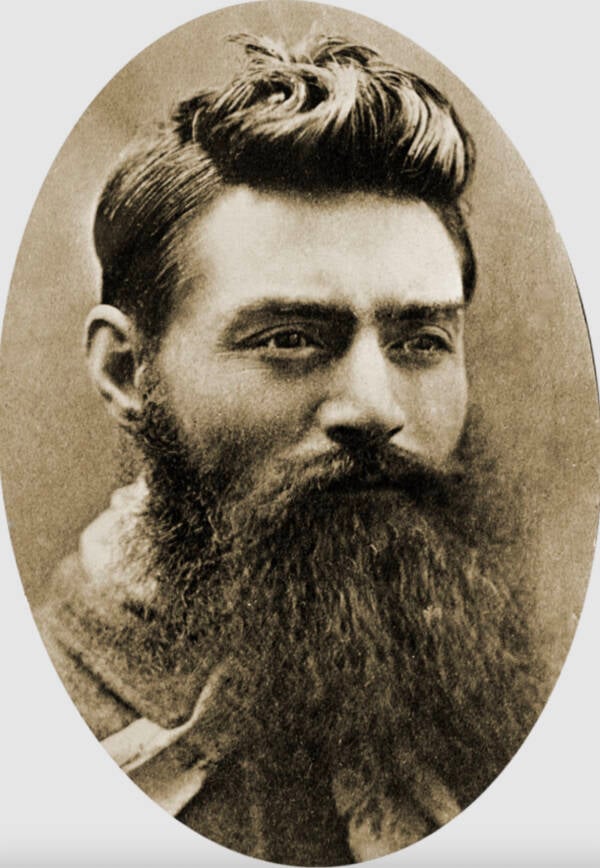 Wikimedia CommonsKelly the day before his execution.

On June 27, 1880, police managed to infiltrate Kelly’s bush hideaway after turning one of Joseph Byrne’s friends into an informant. But the gang successfully evaded capture and fled to Glenrowan two days later, forcing railroad workers to destroy the tracks near the town to thwart police reinforcement.

Anticipating a full-fledged assault, the gang took over the Glenrowan Inn and held its 62 inhabitants hostage. While their captives were allowed to drink and play games, one of them alerted the police who descended on the town and surrounded the hotel.

Influenced by drink and desperation, Kelly built his makeshift armor. In the early hours of June 28, he donned the suit and snuck behind enemy lines firing his pistol in a surprise attack.

He moved calmly, dodging from tree to tree, as bullets deflected off of his armor plating. He wounded several officers until they hit him in the legs and groin — forcing Ned Kelly to lay prone.

Police then descended on the hotel to capture or kill the other Kelly Gang members. During the crossfire, police shot numerous civilians, wounding several and killing two, one of whom was an 11-year-old. All other members of the Kelly Gang died in the fray.

Ned Kelly was convicted of murder on Oct. 28, 1880, and he was sentenced to death by hanging. While being led to the gallows on November 11 of that year, he reportedly said, “Such is life,” while other sources maintain he said, “Ah, well, I suppose it has come to this.”

After learning the story of famed Australian outlaw Ned Kelly, read the famous last words of historical greats. Then, read about the living descendants of famous historical figures.