From Gangsters To Gentrification: 8 New York Mob Murder Scenes Then And Now

Grisly scenes from when John Gotti and Al Capone orchestrated hits on the streets of a violent New York that simply doesn't exist anymore. 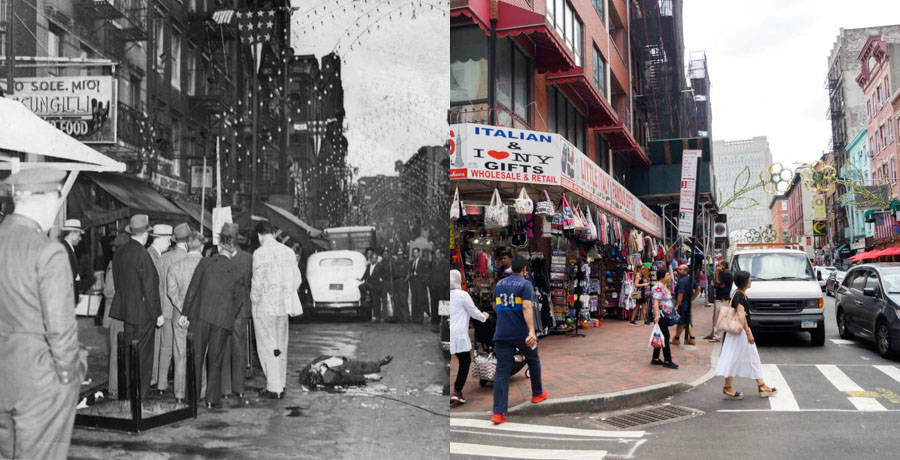 Many of us have seen Goodfellas, The French Connection, and numerous other iconic crime movies that paint the New York City of old with a renegade flair not unlike that of the Wild West. Sure, Times Square is now like Disneyland — but, as these vintage movies show, at one time The Big Apple was the crime capital of the United States.

The first half of the 20th century was simply a different era, one in which mob hits were sometimes carried out almost as public spectacle, with a sense of theatrics, in places like restaurants, barber shops, and hotel lobbies. This sort of thing certainly didn’t happen all the time, but when it did, people undoubtedly took notice.

“That kind of hit was very rare,” said Lorcan Otway, director and curator of the Museum of the American Gangster in New York’s Lower East Side. “In organized crime, generally speaking, you were killed over money – you were almost certain you were killed by someone you knew. And quite a number of times it was by your best friend. It was a matter of you’d get in a car with your buddies, they’d drive off somewhere and shoot you. And until somebody put a bullet in your head, you didn’t realize it was a problem.”

Still, these public mob hits did occur — and there are scores of stark crime scene photos that document this grisly era in pre-gentrification New York.

That Starbucks you walk by every day? You probably didn’t even realize that the head of Murder, Inc. was gunned down at that very locale back in 1957.

In fact, New York is filled with locations once home to macabre mob crime scenes. See some of the most notorious locations — then and now — below:

Mob Murders Of New York: The Spot Bar And Grill 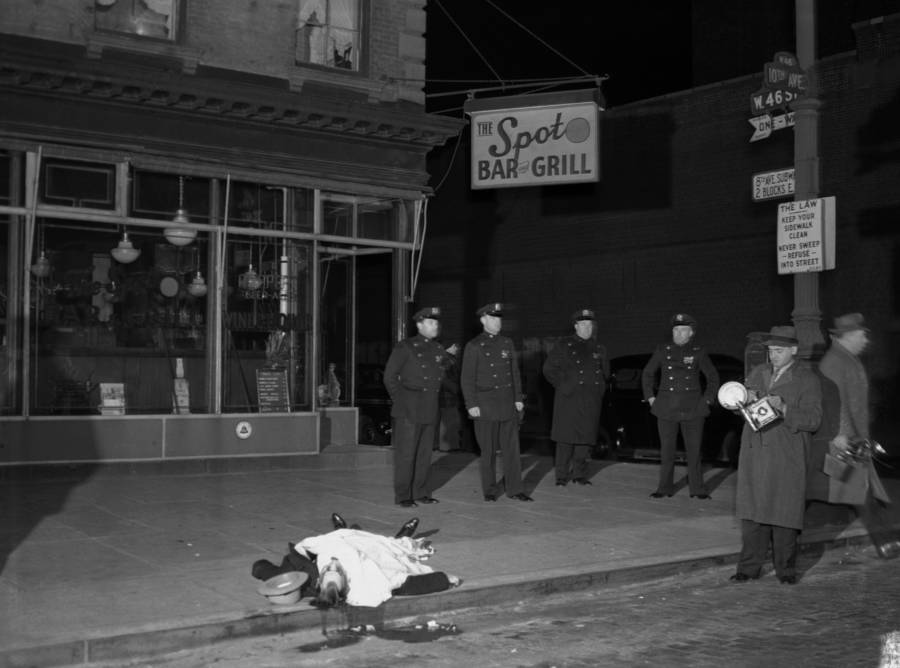 Getty ImagesThe body of David “The Beetle” Beadle lies outside of The Spot Bar And Grill on Dec. 9, 1939. 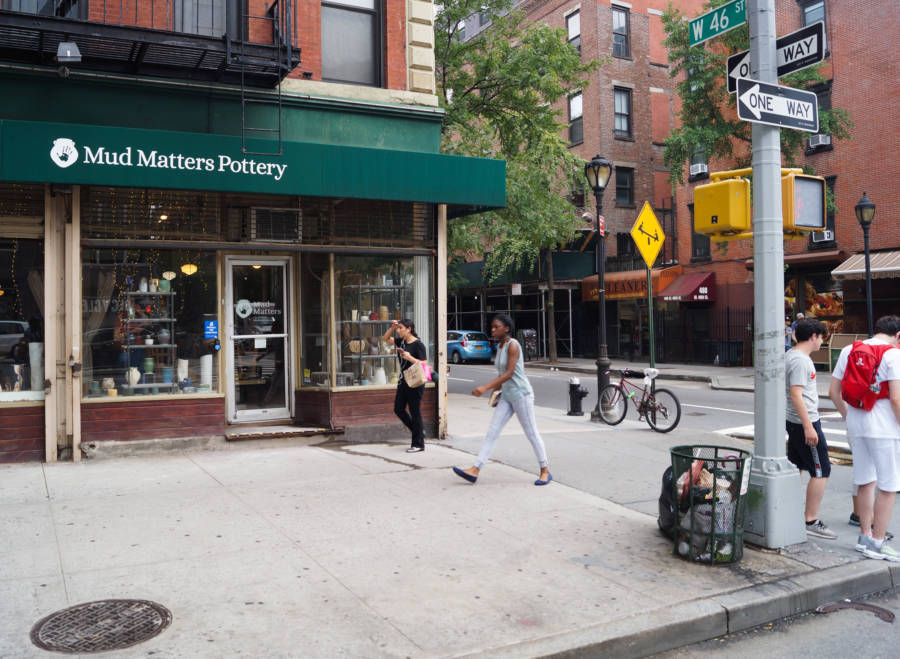 Around 1 AM on December 9, 1939, mob-affiliated longshoreman David “The Beetle” Beadle enter the Spot Bar and Grill at 46th St. and 10th Ave. in Hell’s Kitchen. He had been out dancing with his wife, and his brothers and their spouses earlier that night but stopped by the restaurant for a glass of water to take a pill for his heart condition. This decision proved more deadly than any medical condition the mobster had.

Beadle took a few steps outside of the bar when a taxi pulled up and two men stepped out and fired away. Beadle received several bullets to the head and dropped dead on the sidewalk. The gunmen re-entered the cab and drove off. The gun used to fill Beadle with holes was found under a car a half a block away.

The scene of his grisly murder — carried out as part of a gangland turf war over control of the docks — was immortalized by crime scene photographers and remains a ghastly sight to this day.

Today, the location of Beadle’s murder is home to Mud Matters Pottery, which hosts classes for adults and kids.

“We’re living in very different times,” said Otway. “It’s visible that there’s been a change in organized crime – since [former mayor Rudolph] Giuliani. A major part of the dynamic has been gentrification.” 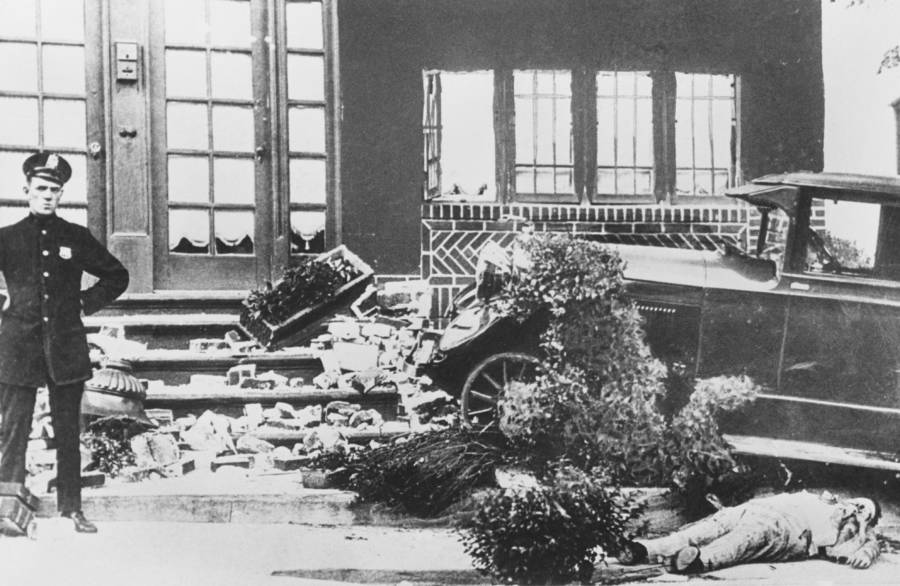 Getty ImagesThe body of Frankie Yale lies on the ground just after he was killed on July 1, 1928. 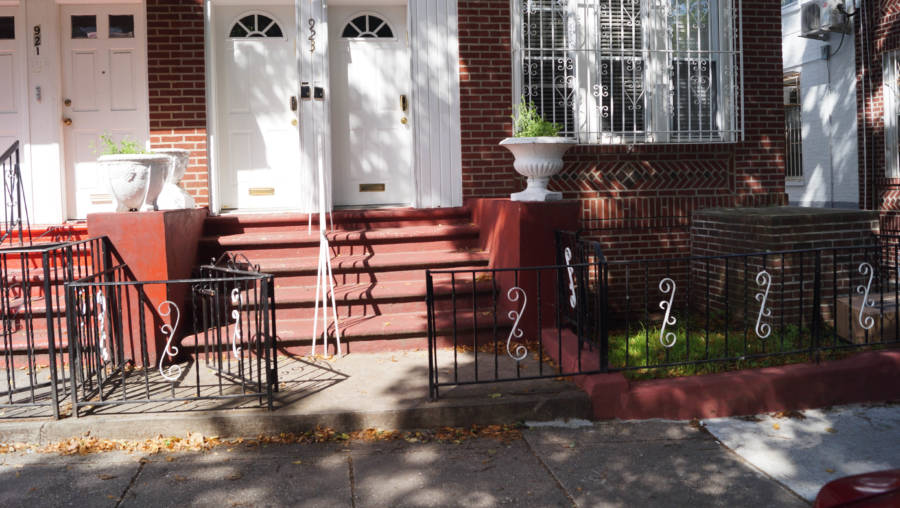 On July 1, 1928, in the now-quiet Brooklyn neighborhood of Borough Park, gangster Frankie Yale was shot to death while trying to drive away from gunmen pursuing him in another car.

Yale, who was Al Capone’s boss during the latter’s Brooklyn days, had begun stealing from his former protege, now a powerful Chicago gangster in his own right. With that, Yale’s fate was sealed.

On the day of his death, Yale received a troubling phone call from someone who told him that his wife had gotten into a problem at their home. With no questions asked, Yale immediately raced home to help.

Once he was inside his Lincoln coupe, four armed men inside a Buick sedan began tailing him.

The hired gunmen chased Yale through South Brooklyn and when they finally caught up to him, they rained bullets down on his car. Yale’s Lincoln had armor plating but the windows were not bulletproof and the sea of bullets killed him, causing him to slam his car into the steps of some unlucky person’s home at 923 44th St.

His protégé-turned-rival, Capone, was the number one suspect behind the murder, but no charges were ever filed against him.

Yale’s funeral was an over-the-top celebration. Thousands of people gathered in the Brooklyn streets to watch his $15,000 silver casket drive by and it took 38 cars to carry all of his flowers.