The Night Witches: The All-Female World War II Squadron That Terrified The Nazis

The all-female members of the Soviet's 588th Night Bomber Regiment painted their planes with flowers and attacked Nazi forces across the Eastern Front.

The women of the 588th Night Bomber Regiment of the Soviet Air Forces — better known as the Night Witches — had no radar, no machine guns, no radios, and no parachutes. All they had onboard was a map, a compass, rulers, stopwatches, flashlights, and pencils. 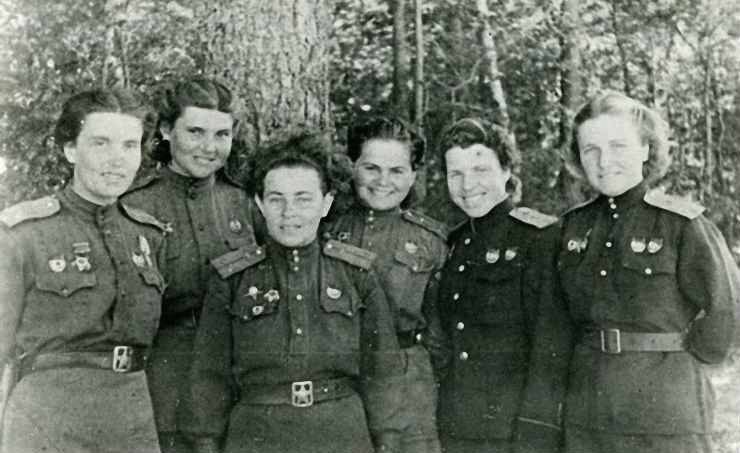 Yet they successfully completed 30,000 bombing raids and dropped more than 23,000 tons of munitions on advancing German armies over the course of four years during World War II. 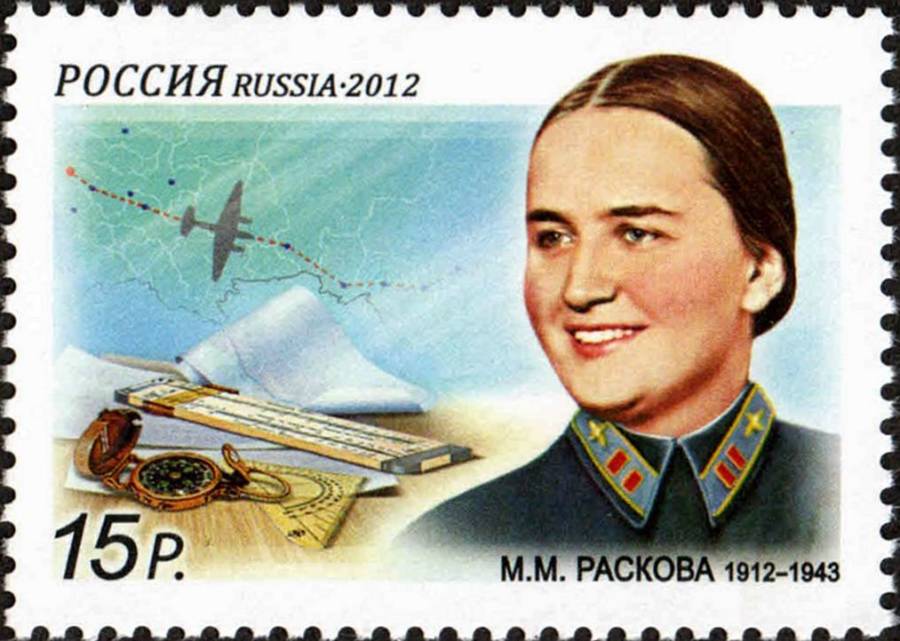 Wikimedia CommonsA stamp portrait of Marina Raskova in uniform with the insignia of a major of the Soviet Air Force.

The all-female Night Witches squadron was the direct result of women in the Soviet Union wanting to be actively involved in the war effort. Many Soviet women had grown weary of playing a support role during the war and wanted to be engaged in combat on the front lines.

From the very inception of the war, Colonel Marina Raskova, a pilot who was known as the “Soviet Amelia Earhart,” began receiving letters from women who wanted to be involved. Raskova took their pleas seriously and petitioned Joseph Stalin to be able to organize a regiment of female pilots to fight against the Germans (and lobbied for Soviet women to be eligible for the draft).

And in October of 1941, Stalin granted her request and ordered the establishment of three all-female air squads. He stood at the forefront of historical progress as the Soviet Union became the very first country to allow women to fly combat missions.

Ultimately, the only air squad that belonged exclusively to the dominion of women was the 588th Night Bomber Regiment — the Night Witches — where every single individual from the pilots to the commander to the mechanics was in fact female.

Thus, in 1942, the assemblage of the regiment began to proceed in Engels, a small town near Stalingrad. The approximately 400 women that enlisted ranged from age 17 to 26. These future combat pilots were greeted by Marina Raskova, who emphasized the gravity and seriousness of their enlistment.

The Night Witches Fly Into Battle With Crop Dusters 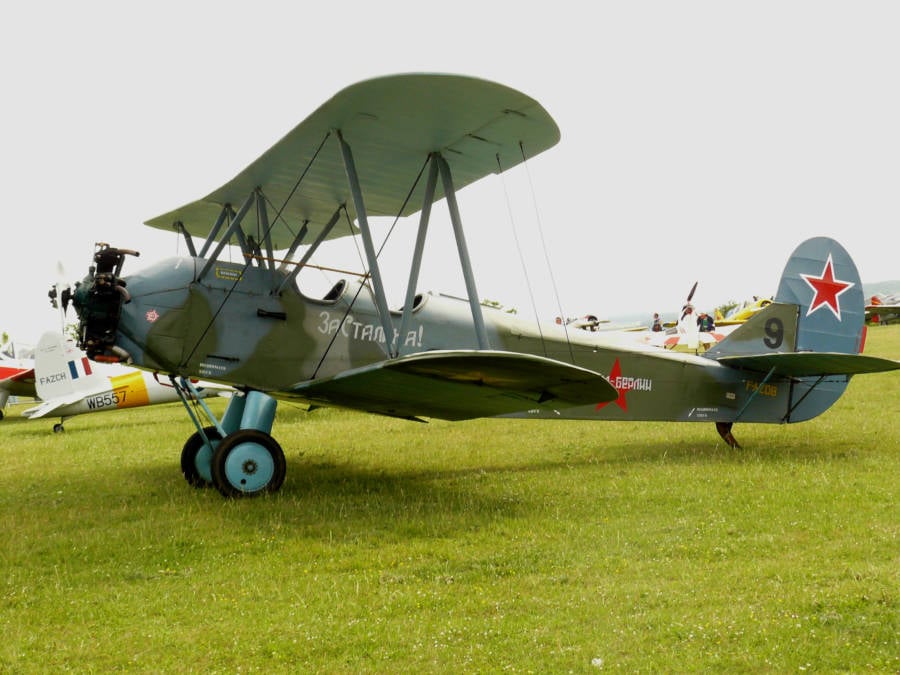 span class=”credit”>Wikimedia CommonsA Polikarpov Po-2 biplane, similar to the aircraft operated by the Night Witches during their missions.

The young women were then given uniforms that were far too large for them, as they were meant for men. Some of the women even tore apart their bedding to stuff into their boots so as to prevent them from slipping off.

Moreover, they were provided with outdated equipment. Their planes were crop dusters that were never intended for combat.

This aircraft — the Polikarpov Po-2, a two-seated, open-cockpit biplane — was made out of plywood with canvas pulled over. It offered no protection from the elements, and at night, the pilots had to grit their teeth and endure sub-zero temperatures, freezing winds, and the risk of frostbite. During the harsh Soviet winters, just touching the icy plane carried the risk of having your skin torn right off. 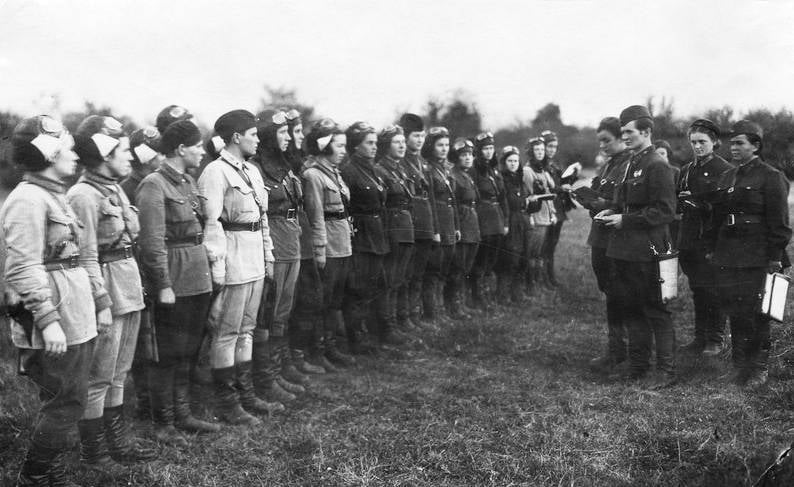 Wikimedia CommonsThe Night Witches lined up at an airfield in 1942.

Furthermore, the planes were so small that they could just carry two bombs at a time. The Night Witches thus had to run multiple missions, eight on average, during the night. Nadezhda Popova — a legendary commander of the squad who flew 852 missions — once successfully ran 18 missions in one daring night.

Additionally, these planes had considerable disadvantages, as they were slow, highly flammable, and had zero armor.

However, they offered several practical advantages. One considerable advantage was that, because of the plane’s primitive construction, it was difficult to spot the Night Witches on radar. And when the pilot approached their target, the pilot would shut off their engine and glide to the impending destination.

Their gliding speed was so slow that they traveled at half the speed of a parachutist. And on the ground, the Germans had little warning except for the sound of the planes in “stealth” mode as they glided above their target. 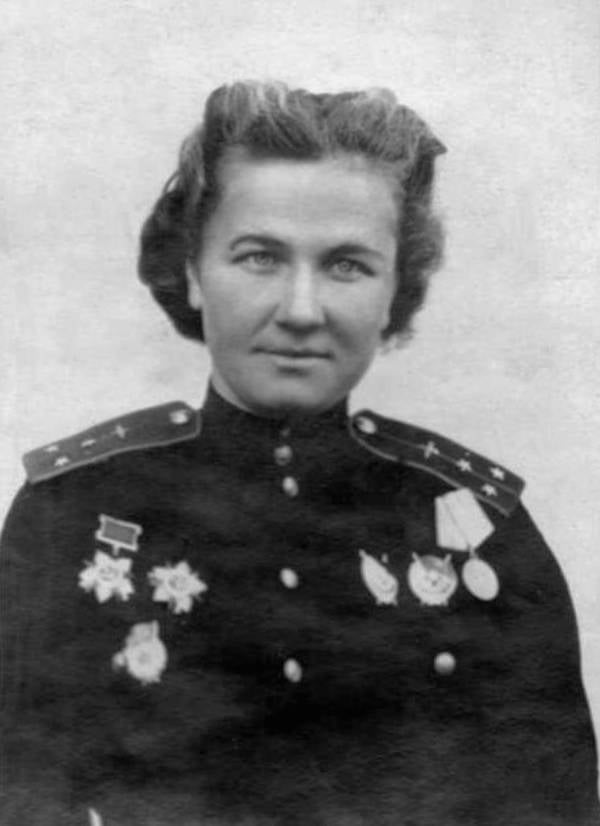 Wikimedia CommonsNadezhda Popova, a commander of the squad who flew 852 missions.

The way the pilots used their gliding technique reminded the German soldiers of a witch’s broomstick and so they called the stealthy assailants the Night Witches. The Germans became so afraid that they refused to light their cigarettes at night so as not to reveal themselves to the Night Witches. The 588th Regiment heard about their nickname and adopted it as a badge of pride.

The Germans were so in awe of the considerable skill of the Night Witches that they spread rumors of the Soviet government enhancing the eyesight of the women with experimental medicine to give them a sort of feline night vision. And the German military responded by automatically issuing a prestigious Iron Cross medal to any German who was able to shoot one of the Night Witches down. 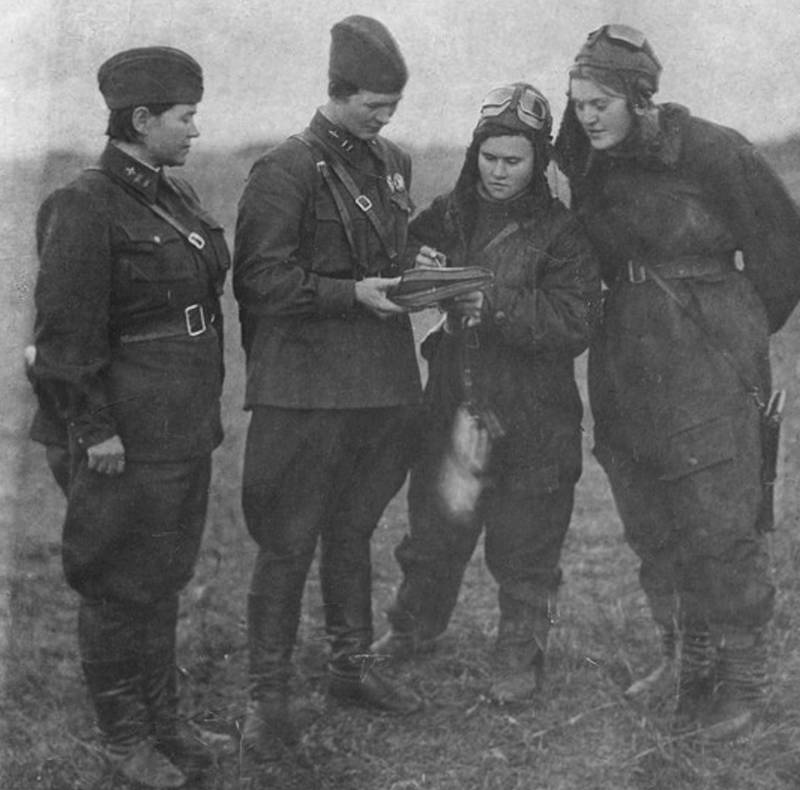 Wikimedia CommonsFour of the Night Witches in 1943.

Aware of their technical disadvantages, the Night Witches only flew in the dead of night. And they always flew in groups of three: Two of the planes would act as decoys and draw the searchlights and gunfire. The two planes would then go off in opposite directions, and twist wildly to avoid the antiaircraft guns. The third would then fly in darkness to head toward the target and drop the bombs.

This sequence would continue until each of the three planes had dropped all of their bombs. 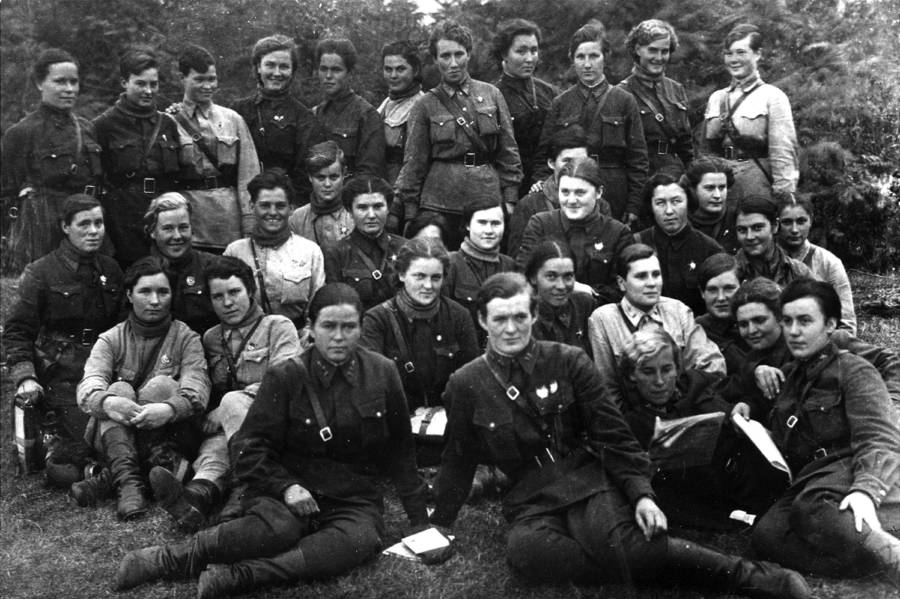 The Night Witches utilized their slow speed to their advantage because it gave them greater ease of maneuverability. Furthermore, the planes sent against them were flying at much faster speeds. Thus the Germans only had a very small window of time to return fire before they had to make a wide turn to return for another run. The Night Witches took advantage of this interim to escape into the darkness.

Not all escaped. During the war, the Night Witches lost 32 pilots, including Colonel Raskova when she was sent to the front line. When Raskova died, she was celebrated with the first state funeral of World War II and her ashes were buried in the Kremlin.

Meanwhile, 23 pilots including Popova were awarded the prestigious title of Hero of the Soviet Union.

However, the Night Witches were excluded from the victory-day parade in Moscow. The reason? Their subpar planes, which were deemed too slow.

Nevertheless, these daring pilots were women of incredible skill and immeasurable courage. They even celebrated their womanhood by drawing flowers on the sides of their planes and painted their lips with navigational pencils. And all the while the Night Witches cemented their place in history by accomplishing some of the most remarkable feats ever seen in aerial combat.

After reading about the Night Witches and their heroic feats, learn about eight more of the most awe-inspiring women of World War II. Then, read about the history of Japanese female samurai known as Onna Bugeisha, who trained and fought alongside their male counterparts.