Inside The Mystery Of The ‘Wow!’ Signal That’s Baffled Scientists For Decades

In August 1977, scientists at Ohio State University’s Big Ear radio telescope detected a 72-second signal from space that was extremely difficult to explain. 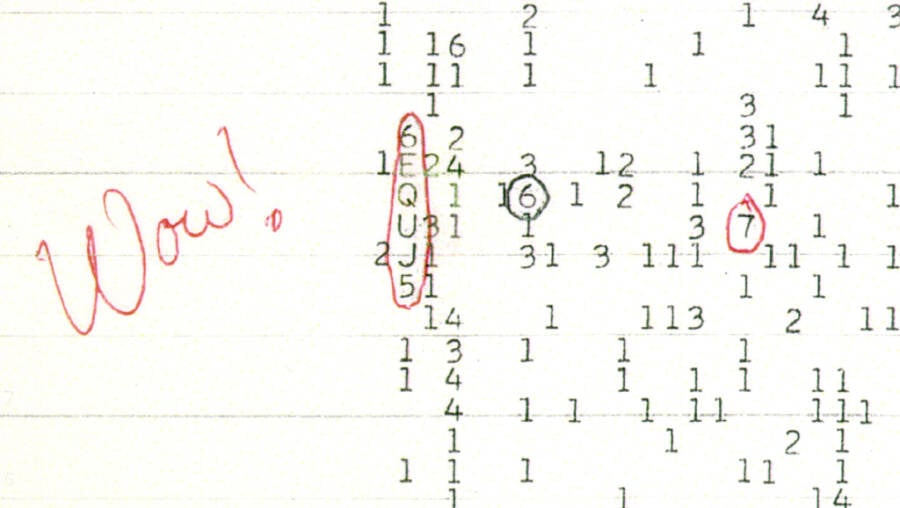 Big Ear Radio Observatory and North American AstroPhysical ObservatoryScientist Jerry Ehman circled a series of numbers and letters on a computer printout in August 1977. The Wow! signal has intrigued scientists ever since.

On a summer night in 1977, Ohio State University Professor Jerry Ehman flipped through a stack of computer printouts. What he found would dramatically impact mankind’s search for extraterrestrial life.

The printouts, an unintelligible list of numbers and letters to the untrained eye, translated sounds picked up in deep space into code. Ehman was a volunteer with SETI, the Search for Extraterrestrial Intelligence. His job was to flip through the printouts looking for proof of aliens.

And on that summer night, Ehman found something.

Ehman spotted a sequence that blew his mind. He picked up a red pen, circled a series of six numbers and letters, and wrote “Wow!” in the margin.

“I mean, without thinking, I wrote ‘Wow!'” Ehman remembers. “It was the most significant thing we had seen.”

But what was the Wow! signal, and why is it still important more than 40 years later?

Listening To Space With The Big Ear

The story of the Wow! signal starts with SETI. In the 1960s, scientists curious about alien life wondered how a distant civilization might make contact with Earth. They settled on radio signals.

The same radio waves that carry Top 40 music to people’s cars also travel through space. It would be relatively easy, scientists speculated, for aliens to send an interstellar radio transmission. And all people needed to do to hear it was to tune the radio to the right frequency.

SETI got to work, using the “Big Ear,” a massive radio telescope located in rural Ohio, to scan the sky looking for radio transmissions.

“I had never seen any signal that strong before,” Ehman told NPR.

The printout read “6EQUJ5” on a mostly-blank sheet surrounded by 1s, 2s, and other low numbers.

What did the code mean? SETI measured the strength of transmissions using the numbers 1-9 for quiet sounds and letters A-Z as the sounds grew louder. The letter “A” was 10, “B” was 11, and so on.

A “U” showing up on the printout meant a sound more than 30 times louder than the normal background noise of space.

“That’s the nice thing about the word ‘wow,'” Ehman said. “I was astonished.”

But the Wow! signal only appeared once. Was it proof of alien life? Or a fluke?

Ruling Out Explanations For The ‘Wow! Signal’

Could the Wow! signal have come from a satellite, or an airplane crossing the sky? A military signal or a broadcast from Earth? Could it have been a natural sound from a distant pulsar?

Scientists quickly ruled out these alternate explanations. That’s because of the unique characteristics of the Wow! signal.

At Ohio State, the radio receiver tracked 50 different channels – the equivalent of tuning 50 radios to different frequencies. But the Wow! signal only came across on one channel.

Natural radio sources like pulsars and quasars – both massive astronomical objects that emit radio waves – create noise across the spectrum. So they wouldn’t have produced noise on a single frequency as the Wow! signal did.

Plus, the Wow! signal came on one specific frequency – the one at which interstellar hydrogen glows.

Hydrogen, the first element, makes up about 75 percent of all matter in the universe. Because it’s so abundant, scientists had guessed that an intelligent civilization would be likely to broadcast a beacon signal at hydrogen’s frequency. And that’s exactly where Ohio State picked up the Wow! signal.

Finally, the pattern of the signal’s intensity matched that of a deep-space transmission. It could not have come from Earth, because such an object, like the Big Ear, would be fixed to the ground. Any signals the Big Ear picked up from that object would not have the variations in intensity that comes from an object in relative motion. 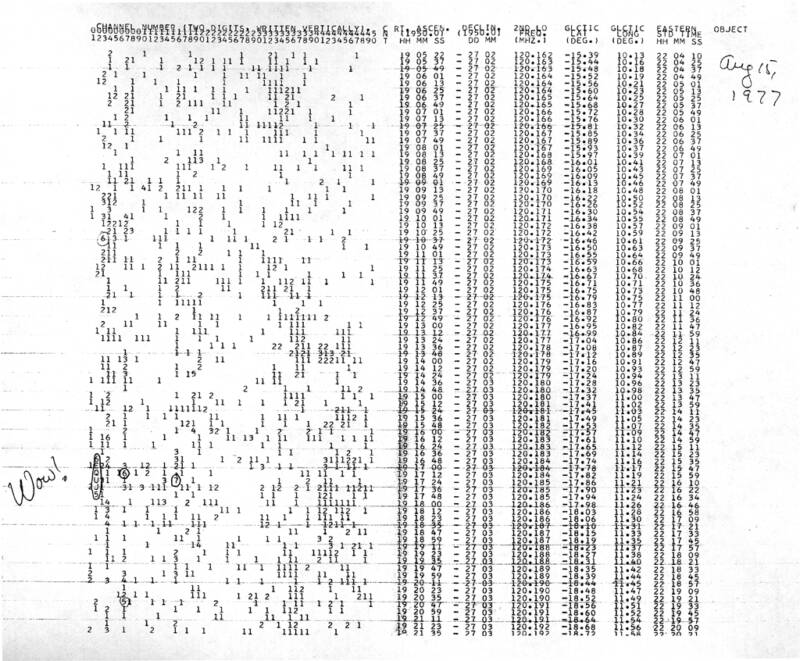 For over 40 years, scientists have been trying to explain the mysterious transmission.

The duration of the transmission – 72 seconds – seems to point to an intelligent, extraterrestrial source. The stationary Big Ear relied on Earth’s rotation to sweep the sky. A transmission from deep space would slowly grow in strength, reach a peak, and fade as Earth rotated. That process would take 72 seconds – the exact length of the Wow! signal. 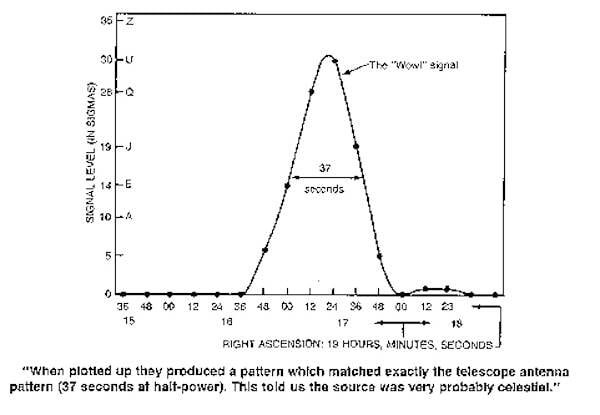 One of the biggest mysteries is why the Wow! signal hasn’t been heard since 1977. Why would aliens send a burst of noise once and never again?

Scientists have several theories. What if the aliens were also sweeping the night sky with their beams? The Wow! signal would appear once, and then not again until the transmitter swept across the Milky Way again and intersected with beams, like the Big Ear’s, on Earth.

This “lighthouse” theory could explain the mysterious one-time transmission.

If aliens were sweeping the sky, would the beam return hourly? Annually? Or every decade? So far, over 40 years have passed without another transmission.

But scientists have new tools to search space in the 21st century. The Very Large Array, a radio telescope in New Mexico, can pick up even more transmissions than the Big Ear. And the James Webb Space Telescope promises to capture more detailed images of deep space than ever before using infrared radiation.

The Wow! Signal In The 21st Century

In 1977, scientists did not have the technology to pinpoint exactly where the Wow! signal originated. At the time, the Big Ear was pointed at a patch of sky near the constellation Sagittarius. But millions of stars share that section of space. 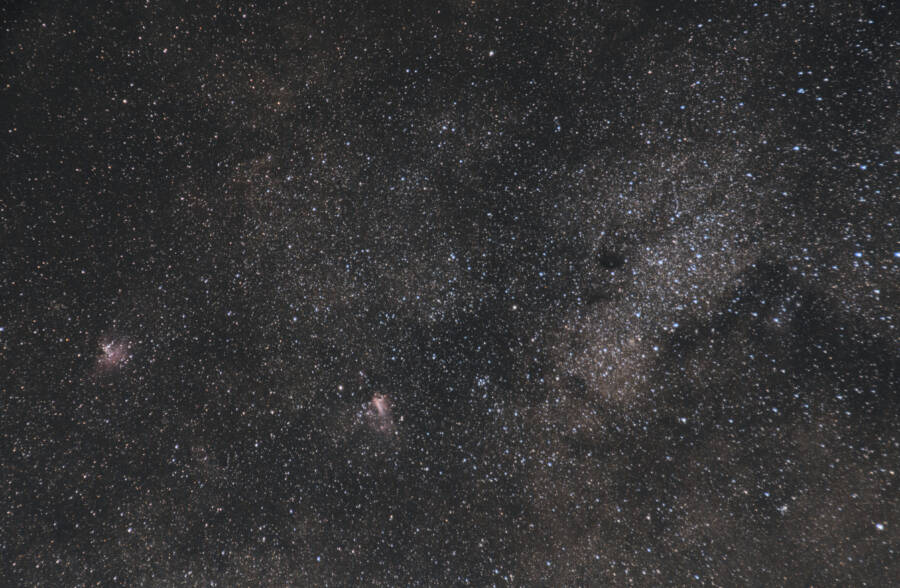 Martin Bernardi/Wikimedia CommonsThe Wow! signal originated near the constellation of Sagittarius, an area with millions of stars.

Today, SETI has new tools to search space. In addition to listening for radio signals, SETI also searches for flashes of light using “optical SETI.” The idea is to look out for any sudden, brief, and unusually bright flashes, which could mean extraterrestrials are trying to communicate by pointing a space laser at the Milky Way.

Still, optical SETI has some of the same limitations as radio searches. The institute scans deep space, spending around a minute on each fraction of sky. The method risks missing signals from anyone using the lighthouse method, because their transmissions might only point our way intermittently. If we only look at each spot for a short time, we may miss the moment when their beam sweeps that spot.

Will we hear the Wow! signal again? Or will another method bring our next clue of extraterrestrial life?

The Wow! signal continues to amaze and puzzle scientists. Next, read about the government research projects that investigate aliens, and then check out deleted Chinese evidence of a 2022 alien transmission.