Are aliens real? Some people really, really want to believe. Here are the real government initiatives (and one compelling probable hoax) that these believers use in making their case that aliens do exist.

With the Juno spacecraft’s recent and much-celebrated entrance into Jupiter’s orbit, it seems that neither NASA nor its federal government funders have lost interest in exploring the far reaches of the galaxy.

As much as they might have historically attempted to downplay it, that interest absolutely stems to UFOs, which the U.S. government has attempted to study since at least the 1950s — albeit due primarily to fears of Red, not Martian, threats. 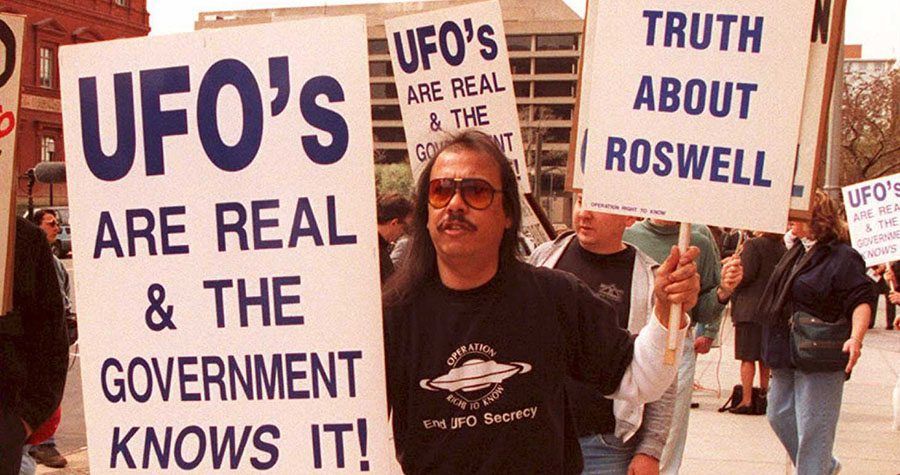 According to a few supposedly declassified — and likely apocryphal — project documents, the U.S. government did make contact with alien life. Unlike warm E.T.-esque encounters, these documents allege that alien contact could, pending the U.S. government’s actions, lead to a vital intergalactic alliance or obliterate the world as we know it.

With that in mind, here are four of the most conspiracy-laden yet nevertheless real projects linking the U.S. government to extraterrestrials (plus one fascinating probable hoax), and which could perhaps answer the big question: Are aliens real? 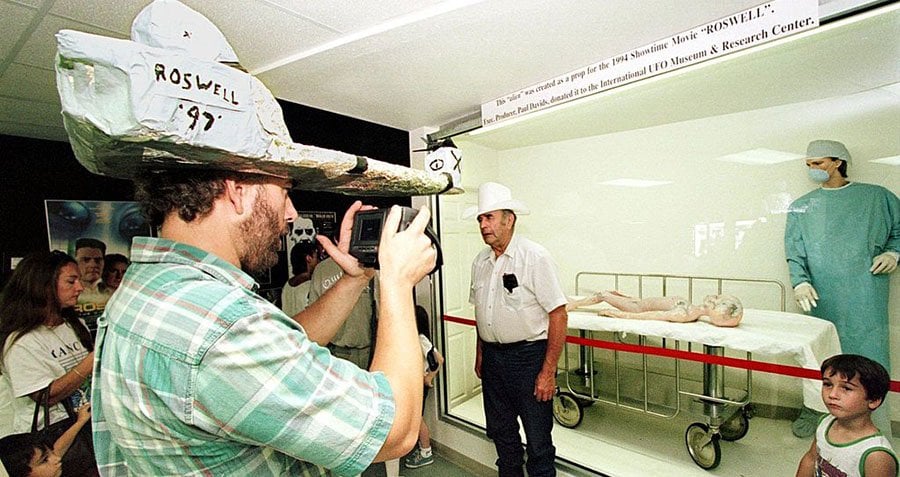 In 1947, the U.S. government unintentionally crashed what they claimed was a weather balloon into the New Mexican desert, causing a bit of hysteria in an America fearful of Soviet military invasion. In response, the government informed the public that this fallen craft was merely a weather balloon.

Some didn’t buy it from the beginning; others let the story percolate for about 30 years before they started developing theories that the Roswell incident marked not a fallen weather balloon but an actual alien encounter. After all, those who lived near Roswell reported that they had never seen the type of debris associated with the crash before.

In official documents released (well, at least partially) by the FBI, the purported weather balloon was disc-shaped and spanned 20 feet in length. Following the crash, the object was sent to Dayton, Ohio’s Wright-Patterson Air Force Base for examination. Wright-Patterson was, and remains, one of the country’s largest and most complex bases — and therefore also one of the best at keeping secrets.

Upon completing the examination, the FBI did not initiate any further investigation into the craft and maintained the story that it was simply a downed weather balloon. Still, FBI director J. Edgar Hoover wanted to stay on top of subsequent investigations and projects, and had the National Investigations Committee of Aerial Phenomena (NICAP) keep him apprised of their work.

Whether he took their questions seriously is another matter. When asked if the FBI officially investigated UFO sightings in any way, Hoover replied that the FBI did not investigate, but sent such intel to the Air Force.

UFO theorists were not deterred, however, and soon after Roswell, the government admitted to creating a few projects aimed at investigating unexplained phenomena. 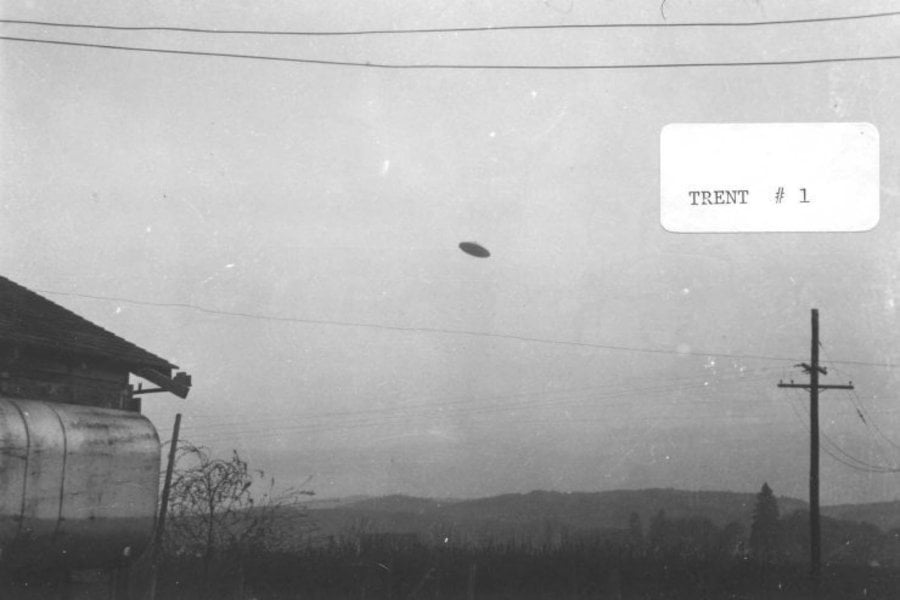 The headquarters were Wright-Patterson Air Force Base — where the Roswell crash materials had been taken — and the project primarily concerned itself with creating and processing reports of sightings from government and non-government sources.

Air force pilots reported many of the initial sightings, noting the presence of unidentified aircraft — initially called “foo fighters” — chasing their planes. One of the first Air Force pilots to file a UFO complaint was so agitated that he was recorded as having said “it [the UFO] was another one of those fucking foo fighters!”.

The investigators managed to explain most of these reports — but that might be because there weren’t that many to begin with. Since the project only accepted tips sent directly to the base, by the end of the project, Sign had only accumulated a few dozen “official” reports. For comparison’s sake, newspapers of the time received 1,500 reports in just a couple weeks’ time.

A report given to the Pentagon near the seven-month project’s end implied that many sightings were of unknown origin and may demonstrate some kind of threat.

Still, Air Force higher-ups used very cautious verbiage in these project reports, which contained information on each sighting including location, duration, and descriptions of the craft, plus information on the person who saw it.

They did so largely out of fear that they would be labeled as “cranks” if they used terms like “extraterrestrial,” or less-than knowledgable if they admitted that they did not know what these objects were. Still, the implication was made when reports — declassified in the 1960s — clearly noted a craft’s origin could not be determined.

One of Project Sign’s most important — and controversial — contributions to the debate about alien life was the Extraterrestrial Hypothesis (ETH). ETH followed the logic that if the Air Force couldn’t identify a craft’s origin, it couldn’t definitively rule out that it was aliens.

Are UFOs Real? The Findings Of Project Grudge 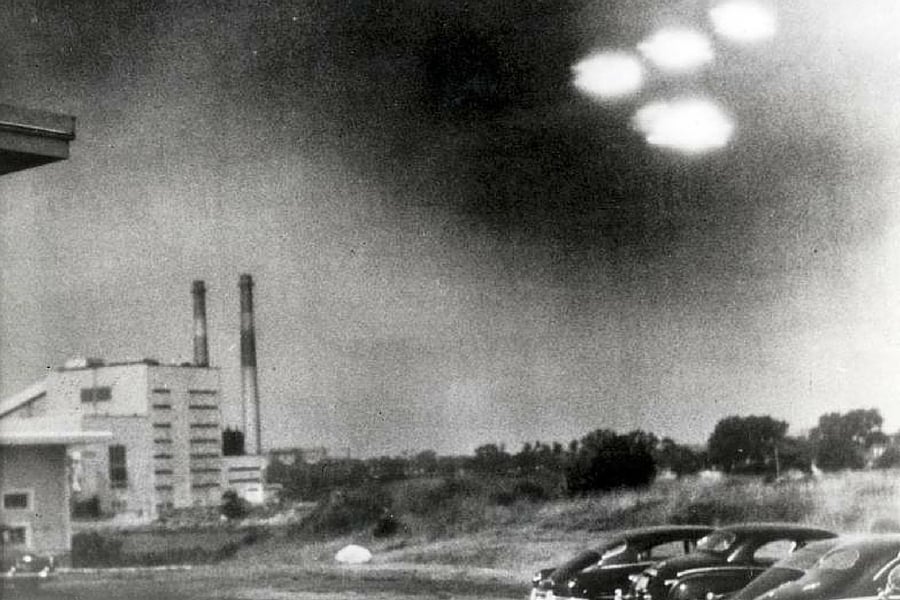 Some Grudge investigators began to suspect that these government-based UFO investigations were simply debunking missions. To these individuals, the projects — and those who led them — seemed to operate on a bias that aliens could not exist.

Even this new project’s name may have been in homage to the division of Air Force superiors who begrudgingly continued the work of Project Sign, which had begun to document UFOs but over time would become part of the alien conspiracy mythology.

Project Grudge also had to address the mounting concerns of the public, who had more often than not been the ones reporting the UFOs in the first place. Embroiled in the fears and paranoia that the Cold War produced, regular people — not just pilots — began reporting UFO sightings.

To assuage the public’s fears, the Grudge team launched a PR campaign, which began in The Saturday Evening Post and backfired profoundly. Grudge personnel figured if they talked openly about these “flying saucers,” the general public’s interest would wane.

But when the piece ran in the Post, writer Sidney Shalett mentioned that some of these UFOs seemed to defy explanation. This was, of course, entirely true — but it helped encourage the public’s engagement in some of the greatest conspiracy theories of our time. 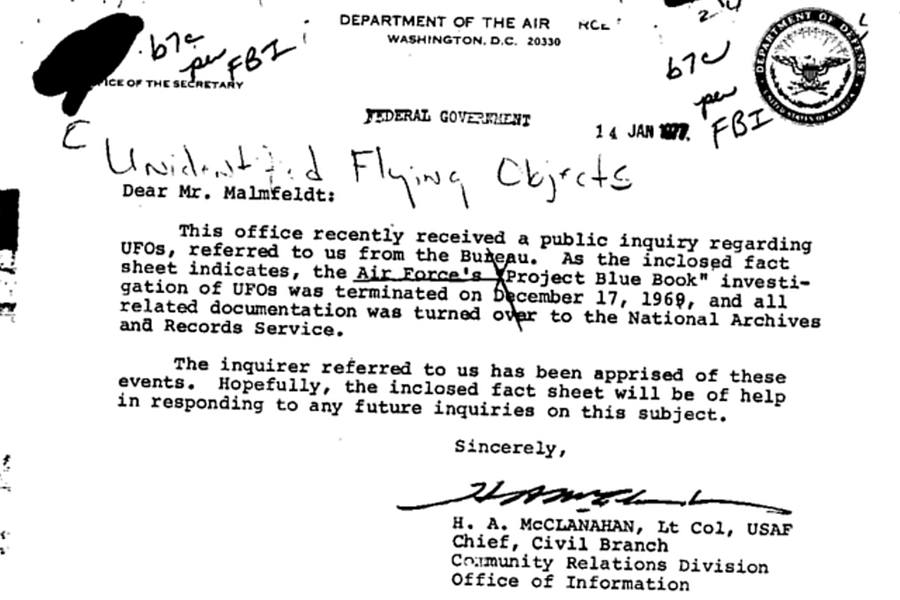 The many criticisms of Project Grudge led one enterprising team member, Air Force Captain Edward J. Ruppelt, to embark on a more open-minded project which he named Project Blue Book.

The project had two goals: Determine if UFOs posed a threat to national security and then, scientifically analyze whatever data the air force collected. In 1952, Ruppelt enlisted Air Force personnel and got started.

Between 1952 and 1969, the project had accumulated around 13,000 sighting reports, nearly half of which were technically not explained. Some say that this number would have been higher had Project Blue Book members not dropped sightings listed as “probable” or “possible” from the list in an attempt to convey more certainty about the actuality of UFO sightings.

However, the Air Force and the National Academy of Sciences shut down Blue Book in 1969, after NASA landed on the moon. The reason? Both parties said the project’s research did not justify funding, either for science or issues of national security.

The government released the records to the public shortly after. But, the government re-classified them for a few years to redact witnesses’ personal information, making it impossible for amateur UFologists to hound them in the spirit of continuing investigations.

At its end, Blue Book had recorded 12,618 UFO reports, the vast majority of which were misinterpretations of natural phenomena such as stars. But it was the small percentage of remaining unexplained events that held the world’s attention — and helped produce some of the most elaborate, high-profile hoaxes of all time. 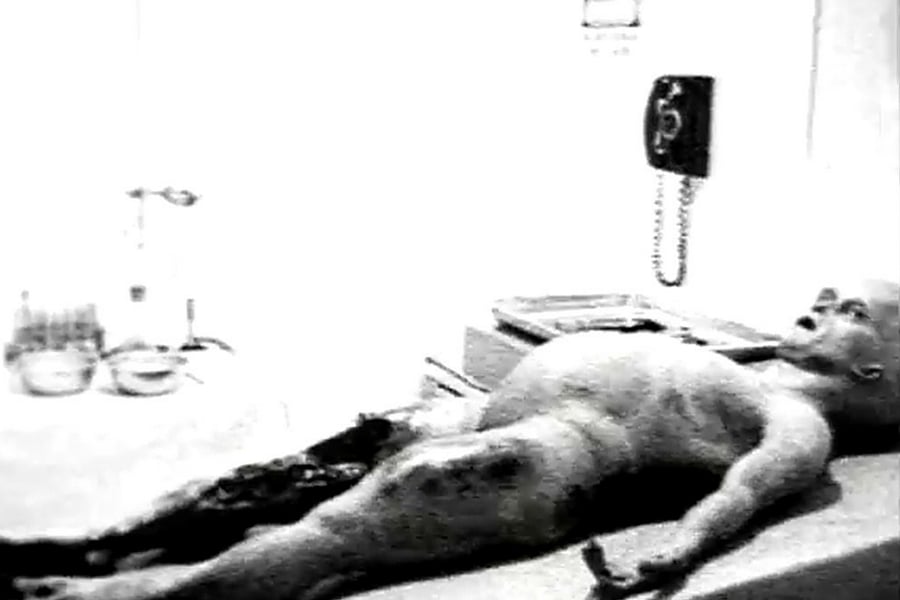 The best known alien-inspired hoax is the infamous alien autopsy footage, which emerged in the 1990s and was alleged to have been filmed just after the Roswell incident.

But there’s another incredibly elaborate probable hoax that many may not be familiar with, and which actually showed up four years before the alien autopsy video: The Blue Planet Project.

In March 1991, handwritten documents appeared at the International UFO Conference in Arizona, outlining not just the details of previous alien visits to Earth but a treaty that existed between the U.S. government and aliens. No one was ever able to determine the documents’ origins, authors, or messenger.

While likely fake, the document is still compelling as its constitutive items likely took years, if not decades, to make. With sci-fi flair, the document gives us an idea of the U.S. government’s relations with extraterrestrial life forms and provides sketches of what these alien races look like.

It also includes information about what happens during alien abductions and how the information gleaned from alien experimentation funnels back to the U.S., who according to the document approved the use of humans and animals for this research.

As for the government-alien liaison, the documents allege that a group of government officials known as MJ-12 are tasked with the job. MJ-12, the book says, sidestep all government bodies and report directly to the president, informing him of any potentially relevant alien intel.

According to the Blue Planet Project, this group doesn’t hesitate to keep the treaty under wraps — even if it means death. As the document writes, MJ-12 assassinated President Kennedy after revealing that he planned to tell the public the truth about the government’s treaty with extraterrestrials.

That’s not the only far-flung idea that appears within its pages, though: 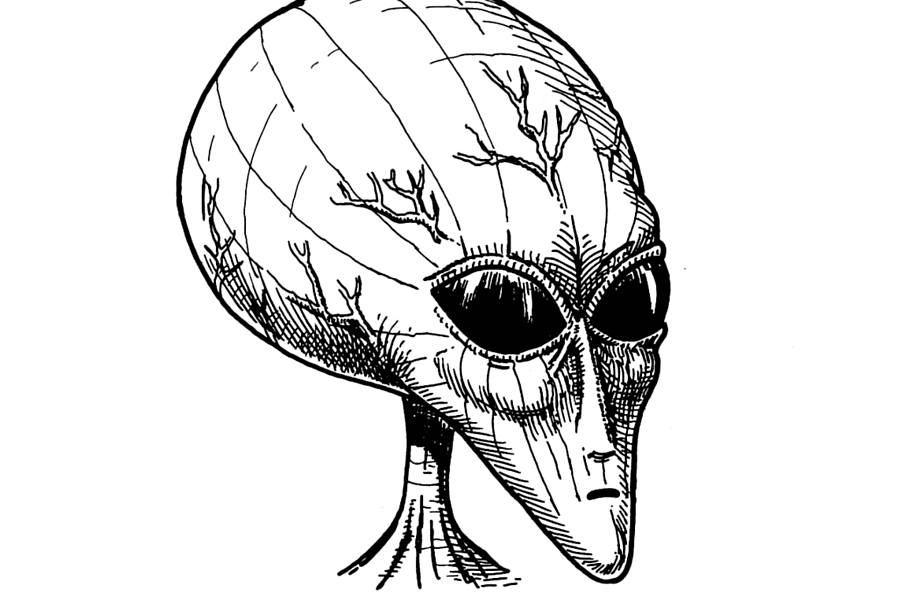 “Approximately 3.5 to 4.5 ft tall with a head large in comparison to the body by human standards. A vague nose, large eyes, small fissure for mouth or no mouth a tall. No ear lobes. Appear to be basically hairless. They have no teeth. No GI system. Arms are long and thin, reaching down to the knees. Fingers and no thumbs. No reproductive organs. No blood as we know it, more grey in color. Under microscope, the skin appears to mesh-like in quality. Life span is unknown.”

Why Would Aliens Abduct Us

When aliens abduct humans, the book says they do so purely for research purposes. Alien psychology as recorded in Blue Planet seems to imply that they are indifferent to our emotions and that they lack empathy.

One theory that attempts to explain the abducting of human females is that the aliens need to gestate their offspring and then learn how to nurture them for survival and adaptability on Earth — a skill set that apparently sociopathic aliens lack.

Whether or not any of this is real, Blue Planet — along with the verifiable Roswell, Sign, Grudge, and Blue Book — speaks to our innate curiosity about the mysteries of the world beyond us.

Whether it’s looking for what lies at the bottom of the ocean or pondering what could exist beyond the stars, we’ve hypothesized about the infinite possibilities of the universe since the dawn of time.

And while our grandparents may have only been armed with their Kodak cameras to substantiate aliens’ existence, today’s technology just might lend itself to the kind of evidence that proves aliens are checking us out. As Fox Mulder would say, I want to believe.

After learning about whether aliens and UFOs are real, read about the strange places on Earth that could prove alien life is real. Then, read up on the Drake Equation, which was recently used to calculate the exact odds of whether or not alien life exists. Finally, check out the contents of the Golden Record, the time capsule of humanity that NASA made for aliens and sent into space.