Known as the “Incubator Doctor,” Martin Couney was a controversial figure in the early 20th century. But today, he’s recognized as a hero who saved thousands of vulnerable infants. 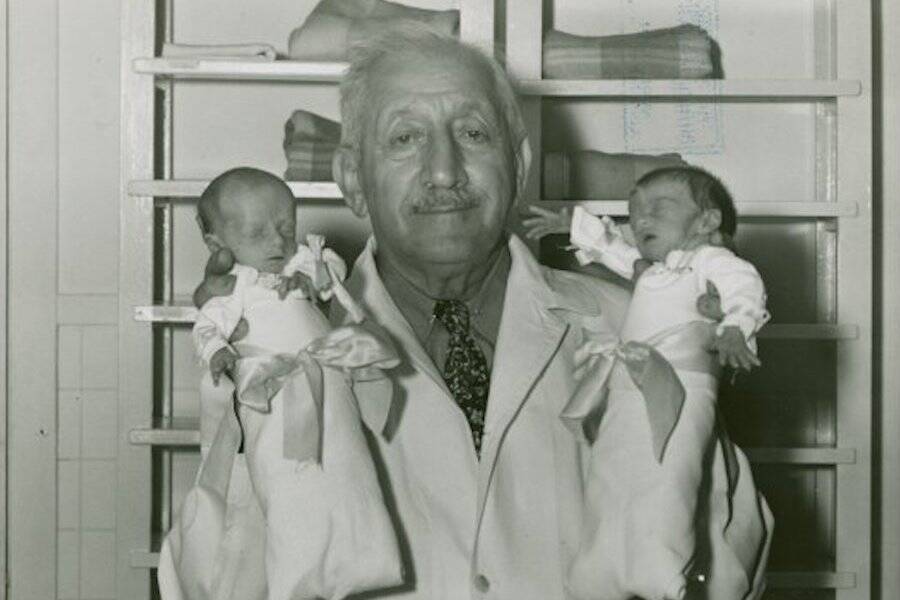 If you visited New York’s Coney Island in the 1930s, you’d be treated to a variety of sideshow attractions and rides, all for the low price of 10 cents. But if you ventured further down the boardwalk, for an extra 25 cents you could see Martin Couney and his groundbreaking incubator babies.

Guests who paid the fee saw tiny premature babies in rows and rows of glass incubators — some as small as 1 lb. — fighting for their lives.

While little more than a curiosity at the time, Martin Couney’s sideshow not only saved thousands of lives but changed the way the world administered neonatal care to babies born prematurely. 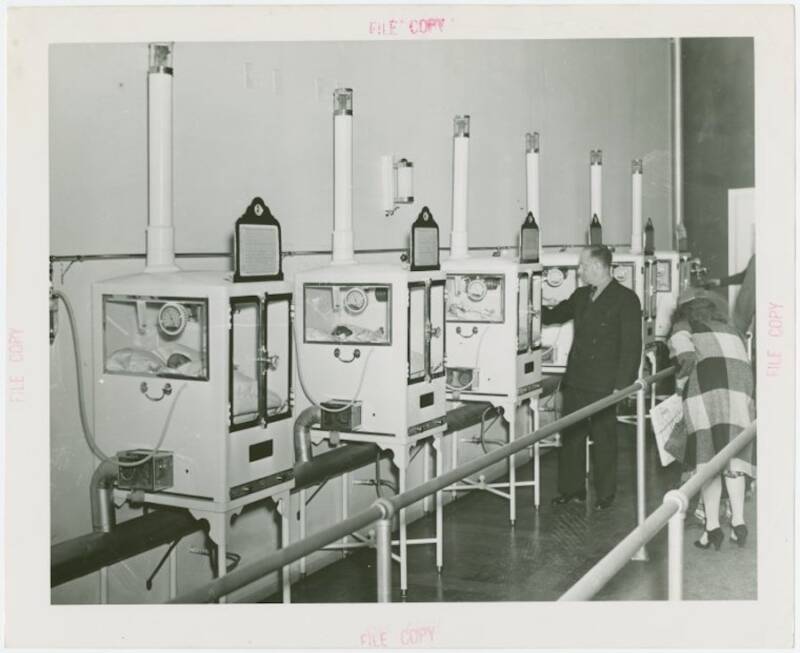 New York Public LibraryMartin Couney’s incubator exhibition at the 1934 New York World’s Fair. Much of his journey to this point is a matter of speculation and myth.

Martin Couney was born Michael Cohn in Krotoszyn, Poland in 1869. Beyond that, very little is known about his life before he immigrated to America in 1888. This is because, like many sideshow entertainers, he was quick to change the details of his past to suit the best-selling narrative.

He claimed to have obtained a European medical license after studying medicine in Leipzig and Berlin. But today’s historians are unanimous in the belief that Couney was not, in fact, a physician by training. For one thing, he would have been too young to attend college before he emigrated from Europe at the age of 19.

Couney also claimed to have studied under the pioneering Dr. Pierre-Constant Budin, considered the founder of modern neonatal medicine.

Budin’s groundbreaking research into such concepts as umbilical cord blood, the benefits of breastfeeding, and perinatal care were all credited with greatly improving the quality of life — and the lifespan — of both babies and mothers in early 20th century France. 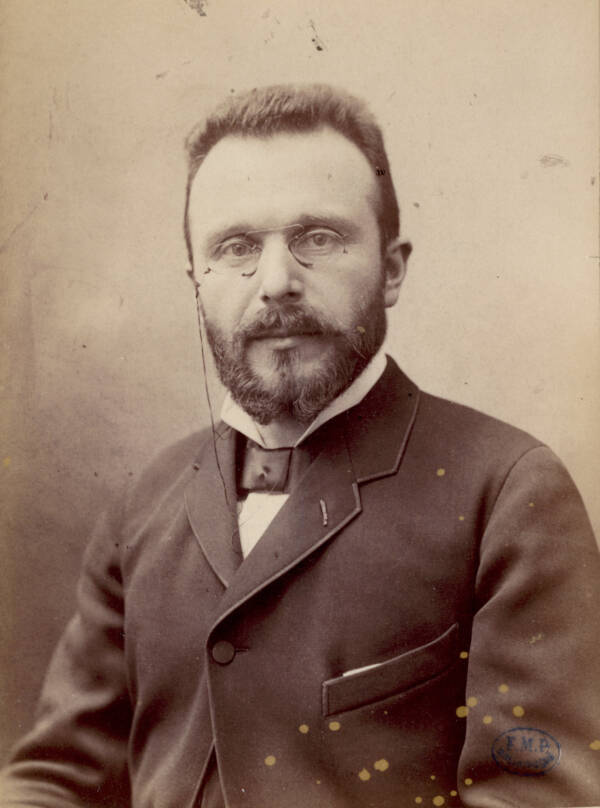 He also said that he was Budin’s intermediary at the 1896 Berlin Great Industrial Exposition, where the pair exhibited Budin’s “child hatchery.” More likely, Couney was a medical equipment technician at the exhibition with Budin, if the two men knew each other at all. No evidence for their relationship exists, and Couney was in America at the time.

Regardless, Budin’s “hatchery” was used to great success. It had been used with chickens on farms, but had never before been used with humans. The crowd loved it.

Budin exhibited it in 1897 at Queen Victoria’s Diamond Jubilee Celebration, in 1898 at the Trans-Mississippi Exposition in Omaha, Nebraska, and in 1901 at the Buffalo, New York Pan-American Exposition.

Though the timeline is uncertain, as some point before 1907, Couney was successfully using incubators to save premature babies. He even saved his own daughter with one. 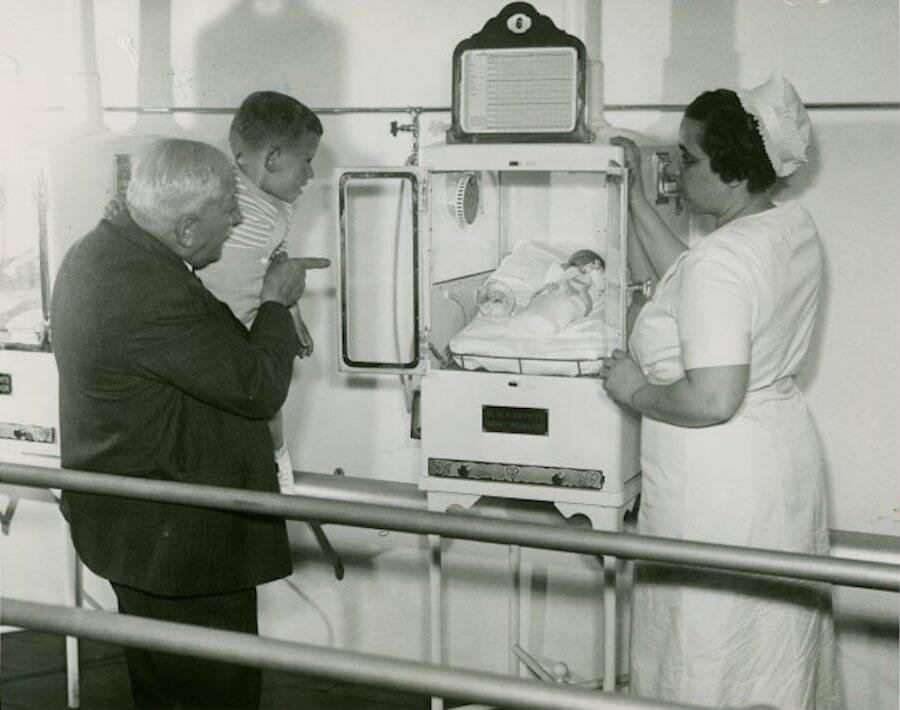 Martin Couney and his daughter Hildegarde show a young boy how they saved his life with an incubator, c. 1935.

There is one undeniable fact that seems to be the key to his lifelong interest in saving premature babies: In 1903, Martin Couney married a nurse named Annabelle Maye. Four years later, Annabelle gave birth six weeks early to a daughter named Hildegarde, who weighed just three pounds.

And had Martin Couney not been in the business of incubators, she might not have made it. Premature babies were just as common in the early 1900s as they are today, but there was little — if any — medical care available for them. As a result, as many as three out of four didn’t survive.

But even though incubators had been exhibited around the country, doctors were hesitant to get on board with the idea because their human benefits hadn’t been studied in a scientific environment. What’s more, the “hatcheries” were expensive: a single exhibit cost $75,000 to build, approximately $1.5 million today.

So Couney, now with exposition experience, decided to try another way. 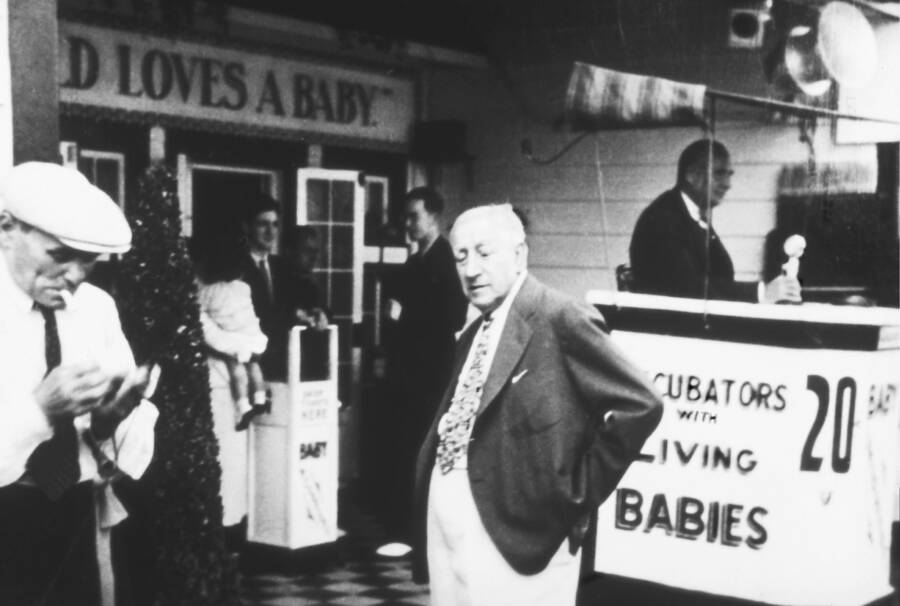 Despite the medical hesitancy to get on board with the incubator revolution, Couney wasn’t going to take “no” for an answer. The babies needed saving, and Couney was just the man to do it — even if he didn’t do it in a conventional way.

In 1903, Couney set up two sideshows at each of Coney Island’s main amusement parks: one at Luna Park and a second in nearby Dreamland. Miraculously, although Dreamland burned to the ground in May 1911, shortly before opening day, all the incubator babies were saved by the NYPD.

The infants were transferred to the Luna Park sideshow, which ran for a staggering 40 years. The proceeds from the sideshow would fund both the care for the babies and the maintenance of their “child hatcheries.”

By the time Couney closed his Luna Park exhibition, he had seen some 8,000 babies come through his care. Of these, he saved the lives of more than 6,500 — including his beloved daughter, Hildegarde, in 1907 — giving Couney a success rate of more than 85%. 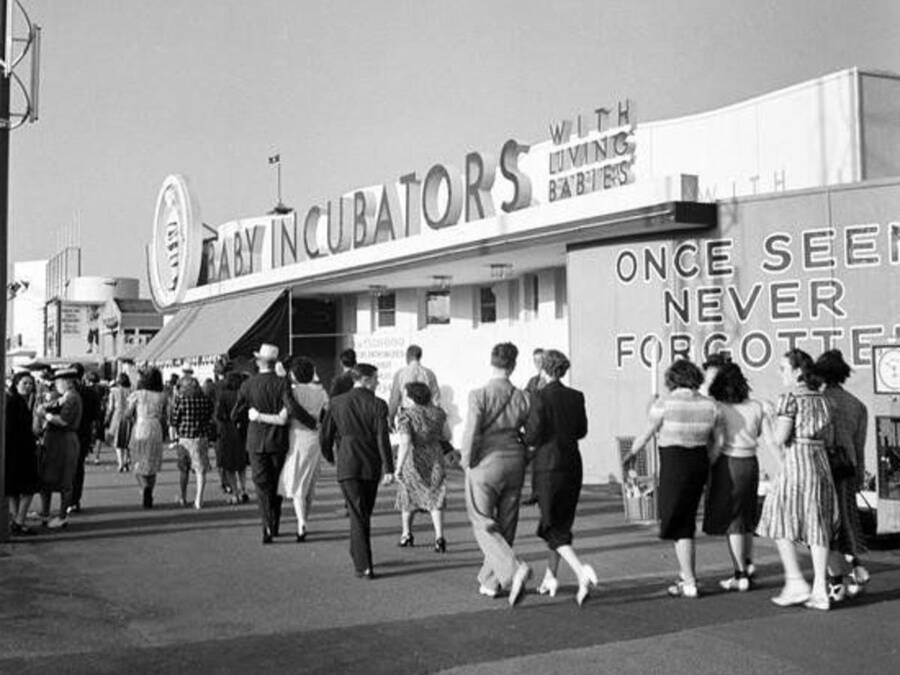 One of those premature babies was Lucille Horn. Born in 1920, she and her twin were born prematurely and weighed just two pounds at their birth. Her twin died shortly after she was born, and without the help of the Couney sideshow, Horn would have joined her sister in death.

“They didn’t have any help for me at all,” she told her daughter, Barbara, in a 2015 Storycorps interview. “It was just: You die because you didn’t belong in the world.”

Lucille Horn died in 2017, at the age of 96. But in her lifetime — a lifetime made possibly by Martin Couney and his sideshow — she was able to get married and have five children of her own, all while working as a crossing guard and a legal secretary.

Premature Babies In The 20th Century And Beyond 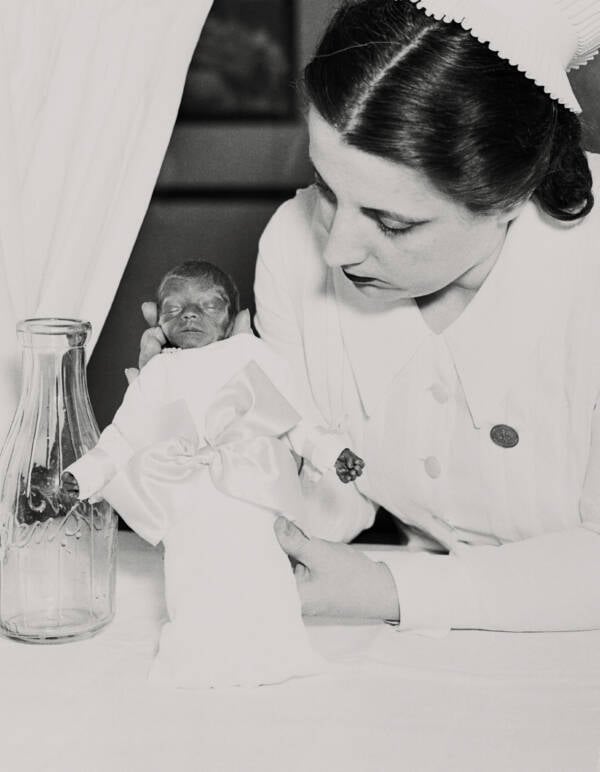 Bettmann/Getty ImagesHildegarde Couney with a 23-ounce baby at Coney Island, May 19, 1937.

By the 1940s, the medical community was finally taking the concept of “child hatcheries” seriously and began incorporating them into their neonatal care routines in hospitals. And Martin Couney was able to finally shut down his sideshow in 1943

But even after “child hatcheries” — now dubbed incubators — were fully accepted in the medical community, additional advances were also developed to perfect neonatal care in the United States.

Techniques that Couney had perfected, including “Kangaroo care” — in-room bonding between the parents and the baby — and advanced antiseptic techniques were all adopted by the modern medical community.

Today, even though one in 10 babies is born prematurely in the United States, their chances of survival are much higher than ever before thanks to Couney’s “child hatcheries.” 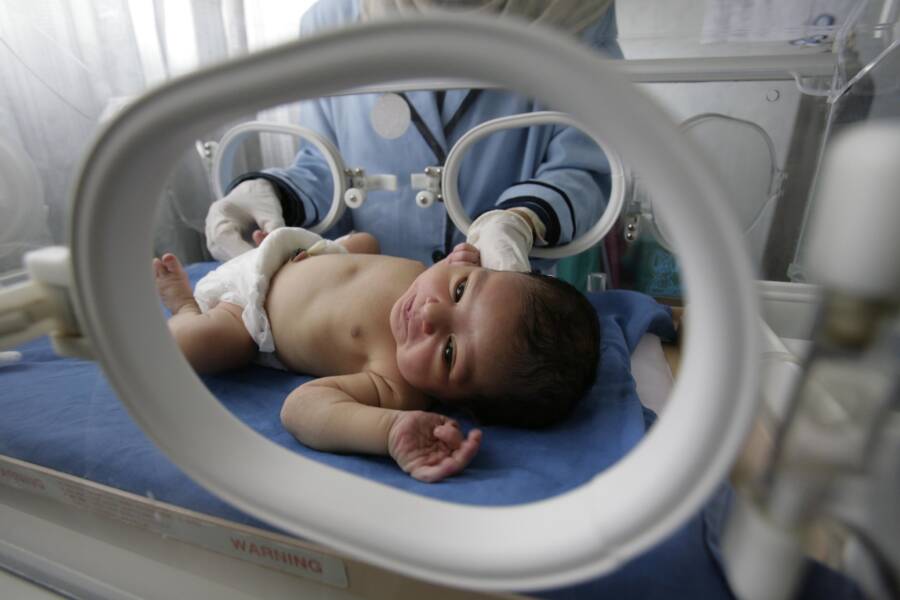 Nasser Nouri/FlickrToday’s premature babies are more likely to survive than ever before thanks to Martin Couney and his groundbreaking “child hatcheries.”

Dr. Martin Couney died in 1950, the savior of thousands. And his world’s fair sideshows and Coney Island exhibitions paved the way for modern American medical advancements in caring for premature births.

“The Incubator station for premature babies is not primarily a place of exhibiting tiny infants,” a radio spot for his incubators at the 1933 Chicago World’s Fair ran.

“Instead, it is actually a lifesaving station, where prematurely born babies are brought from leading hospitals all over the city, for the care and attention that are afforded.”

Now that you’ve read about Martin Couney’s efforts to save premature babies, read about James Harrison, an Australian man whose blood donation efforts saved the lives of more than two million babies. Then, learn about artificial wombs and how this technology is offering new hope to preemies.