An Indonesian Instagrammer captures the surprising normalcy of ordering street food in Pyongyang, the capital of North Korea.

A video recently uploaded to YouTube depicts scenes of apparent normalcy in the streets of Pyongyang, North Korea.

In January, photographer Jaka Parker visited Pyongyang’s Bugsae Street in search of vegetarian cuisine, he wrote on YouTube. Stepping out of his car with his camera in tow, Parker heads to the street’s food stalls, and in doing so captures a place whose reality its government largely obscures from public view.

Women in floral aprons and hats look out from emerald colored stalls, serving pancakes and hand rolls to guests — of which there are few. The unfinished Ryugyong Hotel looms in the distance. Parker, an Indonesian man who according to his website lives with his wife and children in the North Korean capital, finds his meal and eats it with chopsticks.

It’s unclear in what capacity Parker works in Pyongyang, but according to his blog he arrived in late 2012, and lives in a diplomatic compound in the city’s Munsu District. Since his arrival, he has documented everything from the streets of Pyongyang to its traffic cops to his daughters’ first day of school. 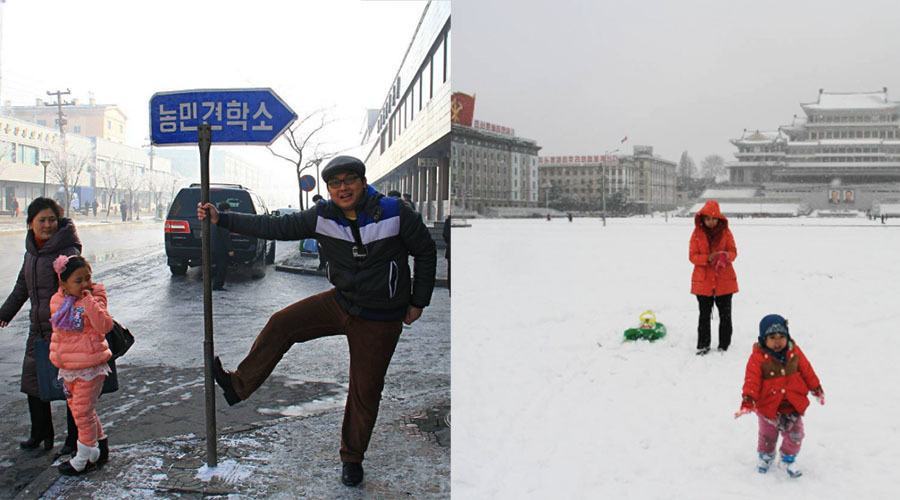 North Korea imposes very strict regulations on who can enter — let alone live — within its borders. According to the Migration Policy Institute, migration to the country “primarily involves temporary visits by (mostly South Korean) business managers, investors, and tourists,” which is generally orchestrated by the South Korean Ministry of Unification in an attempt to “bring the North and South economically, socially, and eventually politically closer together.”

That Parker has lived in the North Korean capital for so long with apparent ease is not as shocking as it may initially seem. Indonesia is one of the few countries that has not severed ties with North Korea for its human rights violations and nuclear missile program, a relationship which according to North Korean publications may stem from a 1960s exchange between the two heads of state.

According to a Pyongyang-published book, Korea in the 20th Century: 100 Significant Events, in 1965 Kim Il-Sung traveled to Indonesia to meet Indonesia’s President Sukarno, who took the North Korean dictator to the Bogor Botanical Garden, where an alliance blossomed:

“[Il-Sung] stopped before a particular flower, its stem stretching straight, its leaves spreading fair, giving a cool appearance, and its pink blossoms showing off their elegance and preciousness; he said the plant looked lovely, speaking highly of the success in raising it.

Sukarno said that the plant had not yet been named, and that he would name it after Kim Il Sung. Kim Il Sung declined his offer, but Sukarno insisted earnestly that respected Kim Il Sung was entitled to such a great honour, for he had already performed great exploits for the benefit of mankind.”

While that history may be more propaganda than fact, the countries continue to engage in dialogue with one another, and each country maintains an embassy in the other.

Next, see what life looks like in North Korea, and the country’s history according to its dear leader.