Once called "the fool of Owari," Oda Nobunaga would eventually be known as the first "great unifier" of Japan.

In the 16th century, Japan was divided. Called the Sengoku Period, it was a time when the traditional feudal structure that united the country was shattered. In the chaos that followed, there was constant warfare.

Powerful lords and their samurai followers fought against each other for dominance. At the same time, the traditionally closed society was struggling to adapt to the new ideas and technologies that were introduced by Europeans. All in all, it was a chaotic time to be alive. 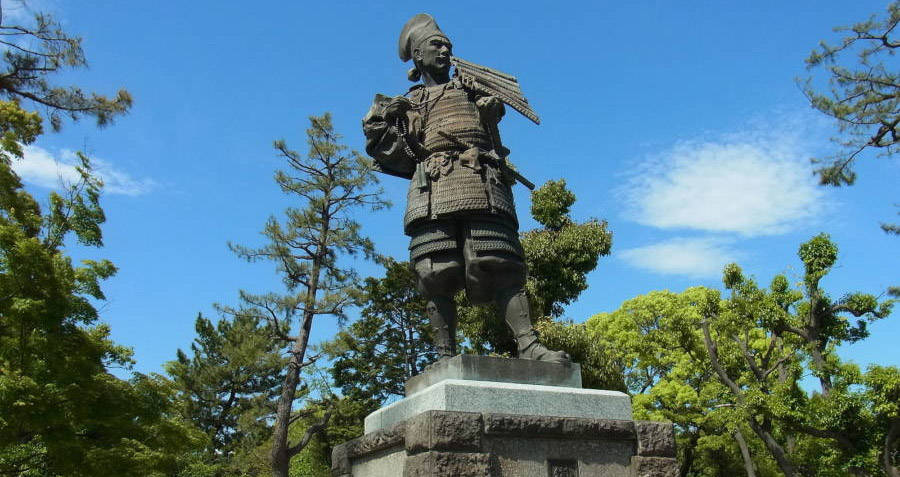 But into that chaos stepped Oda Nobunaga. With a natural gift for rule and a willingness to be brutal when he had to, Nobunaga began the long process of reunifying the divided country. However, if you had known Nobunaga as a young man, he’d probably be the last person you thought of in terms of helping to reunify Japan.

Oda Nobunaga was the son of a military governor in central Japan and from a young age, he was apparently hard to control. He frequently ran around causing mischief with other boys and practicing with matchlock rifles. Apparently, his youthful exploits were so well known that people took to calling him “the fool of Owari.”

So when his father died, it isn’t surprising that not many of his father’s warriors were willing to follow Nobunaga. His uncle, Nobutomo, took the opportunity to declare himself the leader of Owari. But fool or not, Nobunaga wasn’t going to let that happen without a fight.

Gathering the few followers he could, Nobunaga met his uncle in battle outside Kiyosu Castle and defeated him. Nobutomo then committed suicide, removing one threat to Nobunaga’s rule. Showing some of the ruthlessness that would later serve him so well, Nobunaga then assassinated his younger brother.

Now, there was no one to oppose his control over Owari.

That meant that Oda Nobunaga could now turn his attention outward, starting with the rival Imagawa clan. The leader of the Imagawa, Imagawa Yoshimoto, was one of the most powerful feudal lords in Japan. And in 1560, he decided the time had finally come to make a play to become Shogun, or the overlord of the country. Of course, Nobunaga wasn’t about to let that happen.

So, when Yoshimoto raised a force of 40,000 men to attack the capital city of Kyoto, Nobunaga raised his own soldiers to stop him. The only problem was that Nobunaga could only come up with about 4,000 men. Deciding the best thing to do when you were outnumbered was attack, Nobunaga led his troops into battle. 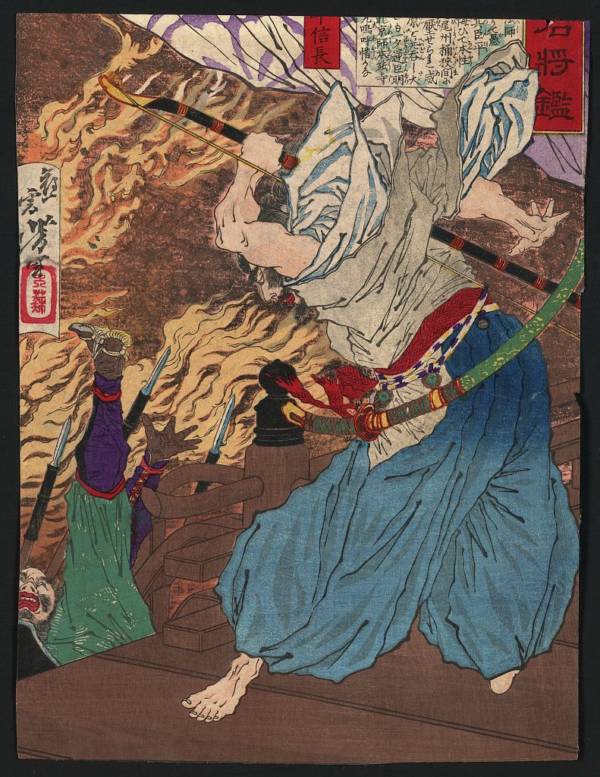 While the idea of attacking when you’re outnumbered 10-to-1 sounds a little crazy, Nobunaga had a trick up his sleeve. He filled out the ranks of his men with dummy samurai stuffed with straw to give the enemy the impression that they were being attacked by a larger force. Then, Oda Nobunaga led his own troops in a daring raid on the enemy’s camp.

Attacking during a rolling thunderstorm, Nobunaga’s small force charged into Yoshimoto’s camp. At first, Yoshimoto assumed that a fight had broken out amongst his own men since Nobunaga’s force was so small. He was quickly proven wrong when two of Nobunaga’s warriors broke through the lines and attacked Yoshimoto, chopping off his head. With their leader dead, Yoshimoto’s army quickly fled.

Over the next two decades, Oda Nobunaga solidified his control over the country by crushing anyone who tried to oppose him.

Part of Nobunaga’s success came from his revolutionary use of firearms. While guns were already a part of Japanese warfare, he used them in much larger numbers, making up for their slow reload rate by having his men fire in rows and then duck down to reload while the next row fired.

In addition, he broke with tradition by choosing men to lead his army based on ability, not their family connections. One of his greatest generals, Toyotomi Hideyoshi, started as a lowly peasant soldier. But because of his obvious ability as a warrior and leader, Nobunaga eventually promoted him to become his top lieutenant.

By 1582, Oda Nobunaga was in control of around half of the country and was the most powerful feudal lord around. But needless to say, that left him with a lot of enemies, some of whom were already planning a way to bring him down. That year, Nobunaga received a message from one of his generals requesting reinforcements at the siege of a castle near Okayama.

Nobunaga dispatched troops to the castle while he stopped for a rest in the temple of Honno-ji near Kyoto. When he woke up the next morning, he found that the temple was surrounded by samurai. The warriors were led by one of Oda Nobunaga’s own generals, Akechi Mistuhide. Mitsuhide had long borne a grudge against Nobunaga for several public insults Nobunaga had given him.

Now he saw a chance for revenge and set fire to the temple with Nobunaga inside. With no other options, he committed ritual suicide. With Oda Nobunaga dead, Mitsuhide began trying to take control over his former master’s territory.

Meanwhile, Toyotomi Hideyoshi received word of Mitsuhide’s treachery. He quickly led his army toward Kyoto and smashed Mitsuhide’s army in the field. Mitsuhide himself was then killed by a group of masterless samurai as he fled from the battle. With Nobunaga and his son killed at Honno-ji, Hideyoshi now stepped into the vacuum as the top warlord of Japan.

Hideyoshi continued Nobunaga’s mission to unify the country, a task that was eventually completed by his own successor, Tokugawa Ieyasu.

As a popular Japanese saying goes, “Nobunaga pounds the national rice cake, Hideyoshi kneads it, and in the end, Ieyasu sits down and eats it.” Today, Oda Nobunaga is remembered as the first “great unifier” of Japan, not a bad legacy for a man who people once called a fool.