Miyamoto Musashi abided by a strict set of 21 precepts for life to groom himself into becoming Japan's greatest samurai. Those tenets are still studied by ambitious businessmen today.

Miyamoto Musashi is Japan’s most venerated swordmaster and has since become one of Japan’s most famous cultural icons.

Though won at least 60 duels by the age of 30, it was his last duel against master swordsman Sasaki Kojiro that made him truly great.

Details of Musashi’s life are often obscured by fable and fantasy. Even the identity of his mother is debated. Nonetheless, some historians have been able to create a compelling portrait of the man.

The boy who would kill his first opponent at age 13 was called Bennosuke and was believed to have been born in 1584 in Japan’s Harima province of western Honshu in the village of Miyamoto, from which the family took its surname. He was also known as Shinmen Takezō or Niten Dōraku and he gave himself the full name of Shinmen Musashi no Kami Fujiwara no Genshin.

But posterity knows this boy best as the master swordsman Miyamoto Musashi who was arguably the greatest of the samurai. 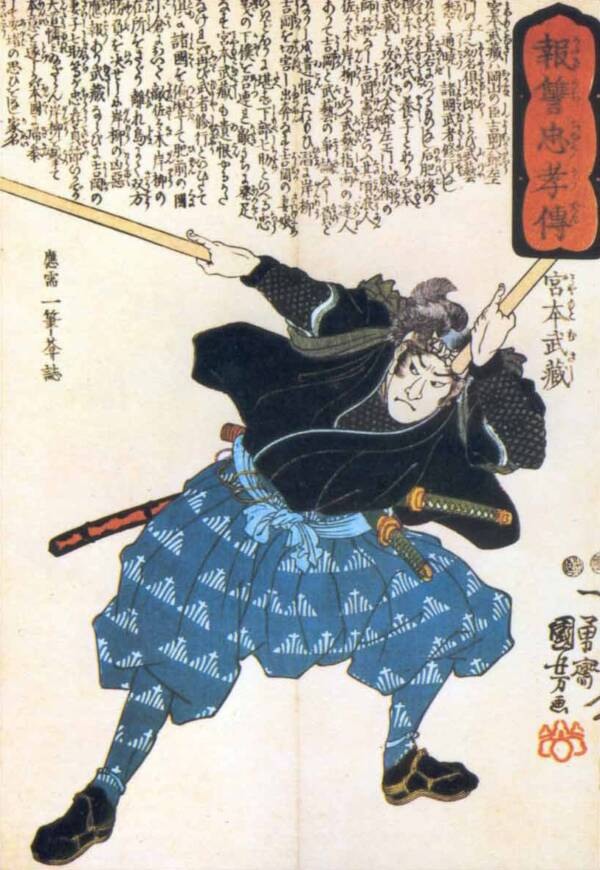 His father was Miyamoto Munisai who was also a noted martial artist. Perhaps that is how Musashi’s heart and soul inherited a love of the sword and he grew to desire to become the greatest swordsman in Japan. But his relationship with his father was tumultuous and dysfunctional.

As a child of divorce, Musashi was often subjected to rumor and gossip about his birth mother. He did not get along well with his stepmother. As Musashi grew older and more experienced with the sword, he became critical of his father’s martial arts techniques. This provoked his father and Musashi often fled the household to the home of his Uncle Dorinbo, a Shinto priest, who would later become responsible for him.

The tensions between father and son reached a natural climax when Musashi criticized his father’s technique one day, provoking a violent reaction from the man, who then threw a dagger and sword at the child. Musashi dodged both and left his childhood home for the last time to live with his Uncle.

Musashi grew up in a time of great change in Japan. The country seethed with feudal wars as the old ruling Ashikaga Shogunate declined then collapsed completely in 1573.

By 1600, Japan was divided into two camps: those in the East who favored Tokugawa Ieyasu, the founder of the last Shogunate, and those in the West who supported Toyotomi Hideyori. 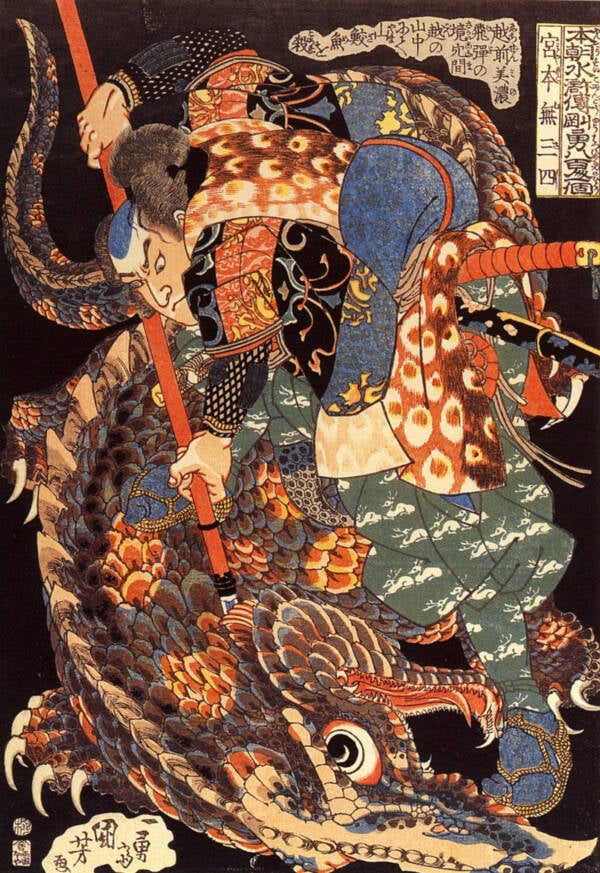 Being from the West, Musashi served in Hideyori’s forces which proved unfortunate after the pivotal Battle of Sekigahara on Oct. 21, 1600, when Ieyasu proved victorious and cemented his control of Japan.

Musashi somehow managed to escape with his life, but he had become a ronin, a samurai without a master. Musashi decided to seek his life’s ambition and become a shugyosha, a samurai who wanders the land on a solitary quest called musha shugyō honing his skills through deadly duels to prove his mettle.

Musashi dropped out of the record for several years, probably training in seclusion in Kyushu. But in 1604, he surfaced, prepared to be the best.

Duels in premodern Japan were serious affairs and often lethal, even when using a wooden sword called a bokken as Musashi usually did. But death was not really a concern for Musashi and other samurai who followed the Bushido warrior code which placed honor and glory above death. 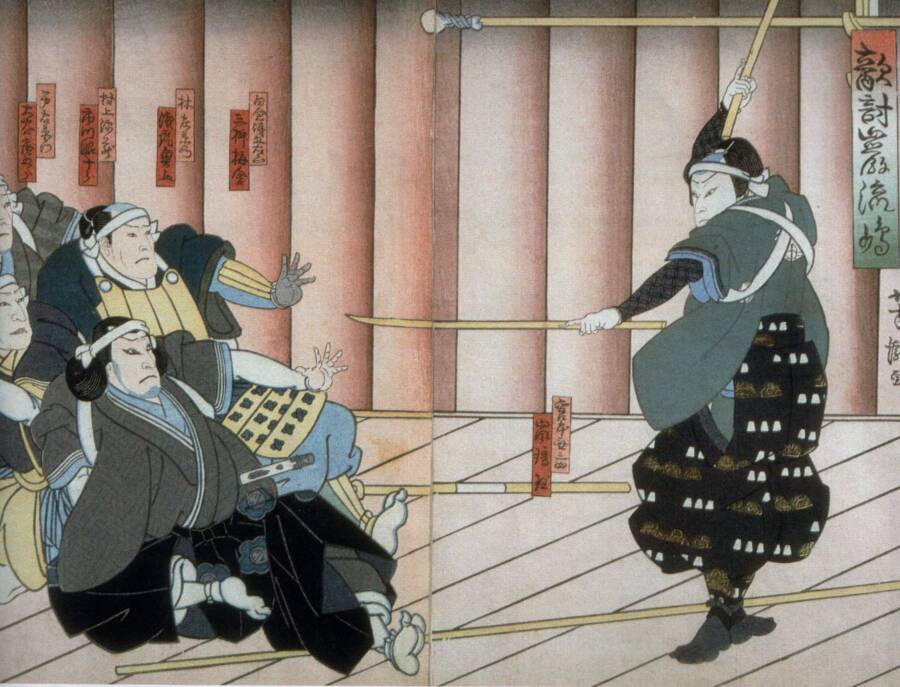 Musashi’s first duel was at age 13 during which he took up a challenge posted by an older samurai named Arima Kihei, whom he killed. Musashi dueled another adept opponent in 1599 and won. But Musashi’s notable duels came after he embarked on his musha shugyō. The first series was with Kyoto’s Yoshioka clan in 1604.

The Yoshioka were renowned for having been the martial arts teachers to the defunct shogun’s family. Musashi first challenged and beat the eldest Yoshioka brother, Seijiro, so badly that Seijiro shaved his head and became a monk.

The second brother, an equally skilled swordsman named Denshichiro, sought revenge in a second duel. Musashi disarmed Denshichiro and struck him so hard with his bokken that the man died instantly. The Yoshioka followers lusted for revenge and possibly dozens of them attempted to kill Musashi with archers and riflemen but defended himself using two swords. This is the style of fighting for which Musashi became famous: the Niten Ichi-ryu or Two Heavens or Two-Sword Style.

“Agitating Your Opponent: You Should Investigate This Thoroughly.” 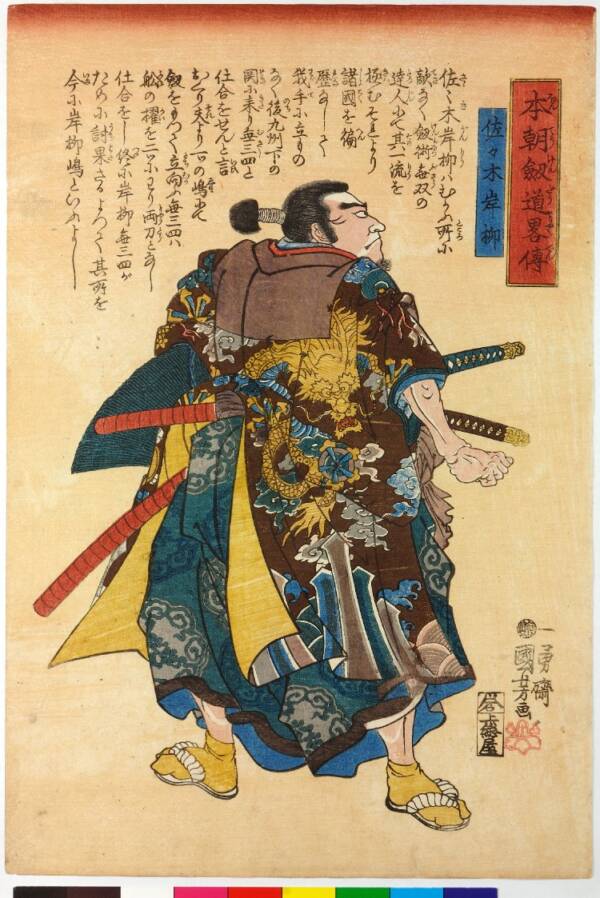 Musashi spent the next several years wandering Japan and challenging others to duels in order to hone his skills and cement his reputation. Most of these duels were lost to history. However, his most important duel was his last against Sasaki Kojiro.

Sasaki Kojiro was the swordmaster of the Hosokawa clan which controlled Kokura in northern Kyushu, Japan. Kojiro was known for his tsubame gaeshi technique which roughly means to “turn the sword with the speed of a swallow.” He was known also for his long sword named “Drying Pole.” His reputation was known throughout Japan and was fittingly nicknamed the “Demon of the Western Provinces.” He took the fighting name Ganryū which means “Large Rock” and had reportedly never lost a duel.

A proud sort, Kojiro’s sword was long and he fought in formal dress, but Musashi was determined to defeat the master swordsman inside and out.

So Musashi challenged Kojiro through one of his father’s former students who was a senior official in Kokura. Assent was given and the date set for the morning of April 13, 1612. The location of the duel was a small, lonely island named Funajima between Honshu and Kyushu.

Musashi then left Hosokawa. While at first there was speculation that Musashi had suddenly become afraid, Musashi justified his departure by explaining that since Kojiro served the Lord of Hosokawa then he was de facto at war with the Hosokawa and needed to leave.

However, it can be surmised that Musashi’s real plan was to disrupt his enemy and to destroy his confidence. Indeed, as Musashi wrote in his most famous work, Go Rin No Sho: “There are many kinds of agitation. One is a feeling of danger, a second is a feeling that something is beyond your capacity, and a third is the feeling of the unexpected. You should investigate this thoroughly.”

It seems Musashi was a master strategist as well as a swordsman. The next morning, Musashi woke up late, washed, and ate breakfast without any urgency. Quite late, he boarded a rowboat to Funajima. Legend holds that Musashi took an extra oar from the boat and carved it into a wooden sword — just longer than Kojiro’s infamous sword. 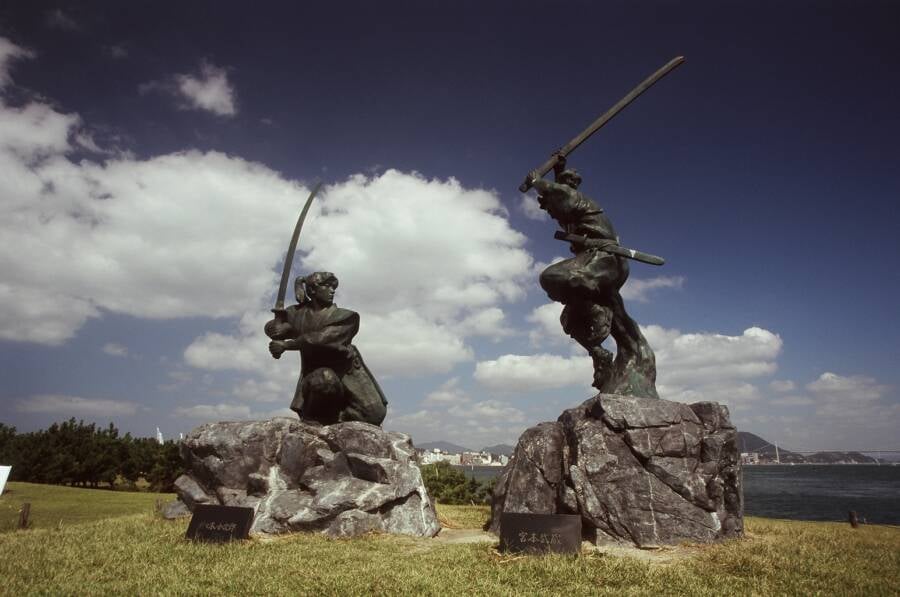 FlickrStatues on Ganryu-Jima commemorate the duel between Musashi and Kojiro.

The Clash Of The Masters

Musashi arrived during the hour of the Serpent, between 9 and 11 a.m., not at the agreed upon 8:00 a.m. The boatman landed Musashi on a sandy spit. The bare-footed Musashi found the infuriated Kojiro with the over-three foot long “Drying Pole” in his hands waiting for him.

Kojiro rushed to the water’s edge and in a rage threw his sword’s scabbard into the water. Musashi smiled and said, “You’ve lost, Kojiro. Only the loser will have no need for his scabbard.”

Musashi’s insult and tardiness had exactly the desired effect. Kojiro rushed at Musashi with a killing blow aimed at the center of his forehead. The cut nicked Musashi’s headband but did not cut him. Meanwhile, Musashi brained Kojiro in the same spot with his oar-sword.

Kojiro fell to the sand and slashed horizontally at Musashi. The blow opened a three-inch gash in Musashi’s thigh but missed any major arteries.

Musashi struck again, this time cracking open his opponent’s left ribs. Blood poured out of Kojiro’s mouth and nose as he fell unconscious. Musashi checked for signs of life. There being none, he bowed to the witnessing officials, returned to the boat, and sailed away before any of Kojiro’s followers could seek vengeance.

In commemoration of Kojiro and the duel, Funajima was renamed Ganryū-Jima.

After the defeat of Kojiro, Miyamoto Musashi could claim to be the greatest swordsman in Japan. But he only became the greatest samurai after his dueling days were done.

The death of Kojiro saddened Musashi and he underwent a sort of spiritual awakening. While Musashi would later participate in minor duels, his musha shugyō was over. He became introspective and he wrote of this time:

“I understood that I had not been a victor because of extraordinary skill in the martial arts. Perhaps I had some natural talent or had not departed from natural principles. Or again, was it that the martial arts of the other styles were lacking somewhere? After that, determined all the more to reach a clearer understanding of the deep principles, I practiced day and night. By about the time I was fifty, I realized the Way of this martial art quite naturally.”

The swordmaster became a martial arts teacher and embraced the philosophy of Zen Buddhism. He also seriously practiced the non-martial arts, taking up calligraphy and painting. He, in fact, became the ideal samurai as a gentleman scholar, artist, and master of self-control.

Miyamoto Musashi had become a samurai for an age of peace.

In 1643, Musashi must have sensed coming death as he began to write his autobiography, Go Rin No Sho, known in English as The Book of Five Rings which he completed after two years.

It is believed Musashi was plagued with a form of thoracic cancer. In May 1645 he gave gifts to his disciples and wrote 21 tenets of discipline titled The Way of Walking Alone. He died on May 19, 1645.

Wikimedia“Shrike on a Dead Tree” by Miyamoto Musashi.

Miyamoto Musashi’s life has been fictionalized several times for Japanese audiences into mini-series and books with the most famous being Eiji Yoshikawa’s epic novel Musashi.

Aside from popular culture, The Book of Five Rings has been studied extensively, not just by martial artists or practitioners of Zen, but also by businessmen looking to employ his strategies.

After this look at Japan’s greatest samurai, Miyamoto Musashi, check out the history of the Onna-Bugeisha, Japan’s tradition of badass female samurai. Then, witness the final days of the last samurai in this gallery.