Even after NFL star Aaron Hernandez was convicted of murdering Odin Lloyd in North Attleborough, Massachusetts on June 17, 2013, one question remained: Why did he kill him? 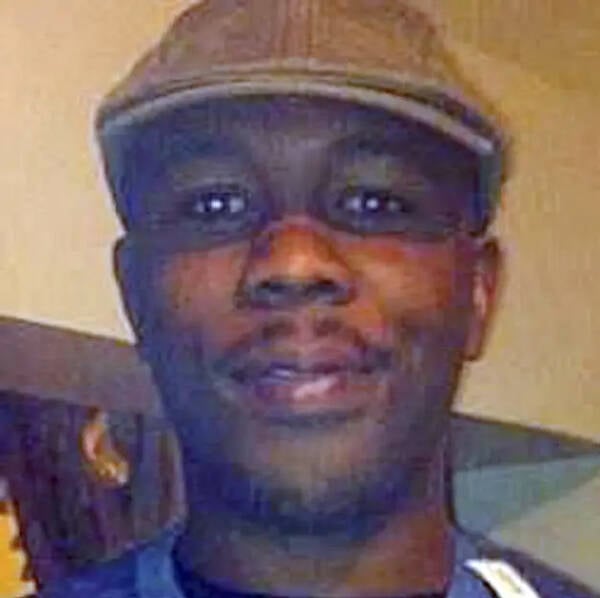 Wikimedia CommonsOdin Lloyd’s bullet-riddled corpse was found in an industrial park. Aaron Hernandez immediately became the primary suspect, as Lloyd was last seen with him.

Odin Lloyd was just 27 years old when he was shot dead in 2013, but unlike most other gun-related homicides in the U.S., his murder made international headlines. Not surprising when the semi-professional football player’s killer was none other than NFL superstar Aaron Hernandez.

Lloyd was an aspiring professional athlete himself, working as a linebacker for the Boston Bandits of the New England Football League (NEFL). When he developed a friendship with Hernandez — then the star tight end for the NFL’s New England Patriots — after a chance meeting at a family function, there was little reason to think it would be setting the stage for tragedy.

It wasn’t merely the fact that the two were athletes, or that they had interconnected lives as a result of their relationships — Lloyd’s girlfriend Shaneah Jenkins was the sister of Hernandez’s fiancée, Shayanna Jenkins. For an athlete with dreams of making it to the NFL, having a friend like Hernandez couldn’t be anything but a positive. Lloyd was tragically mistaken.

The Life Of Odin Lloyd

Odin Leonardo John Lloyd was born on Nov. 14, 1985, on the island of Saint Croix in the U.S. Virgin Islands. After a few years in Antigua, however, the family moved to Dorchester, Massachusetts. Growing up in a dangerous area, Lloyd believed that American football was his golden ticket and one shot at success.

Others saw the same potential in Lloyd as he did himself. At John D. O’Bryant School of Mathematics and Science, Lloyd quickly became a reliable linebacker who contributed greatly to getting his team to the championships. However, the red-blooded teen soon found himself distracted by girls. 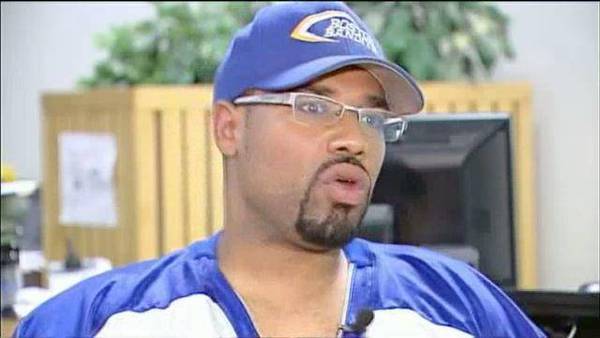 YouTubeDefensive Coach Mike Branch said Lloyd’s “talent was off the charts,” and that his goal was to “get him out of the hood and into college.” It sadly never happened.

The school’s gender ratio was heavily-skewed towards females, which Mike Branch, Lloyd’s defensive coach at the school and later with the Bandits, said posed a major challenge. Lloyd’s grades dropped significantly and soon his shot at playing college football essentially evaporated.

Branch, who was also a probation officer in Brockton, said that the void of a father figure in Lloyd’s life was obvious. He soon became a de facto big brother to Lloyd, knowing that he himself was once an inner-city youth with no clear vision of the future.

“His talent was off the charts,” Branch recalled. “I could see something special in the kid. If football was something that could get him out of the hood and into college, that was my goal.”

Odin Lloyd had two run-ins with the law that led to arrests in 2008 and 2010, though both cases were dismissed. Even though Lloyd did get into Delaware State University, he had to leave the school when the financial aid he needed did not come through.

Taking a job at a Massachusetts power company eventually sent him to Connecticut, where he met Shaneah Jenkins, who quickly became his girlfriend. Though this new relationship interfered with his semi-pro practices with the NEFL, he believed he had found the love of his life. 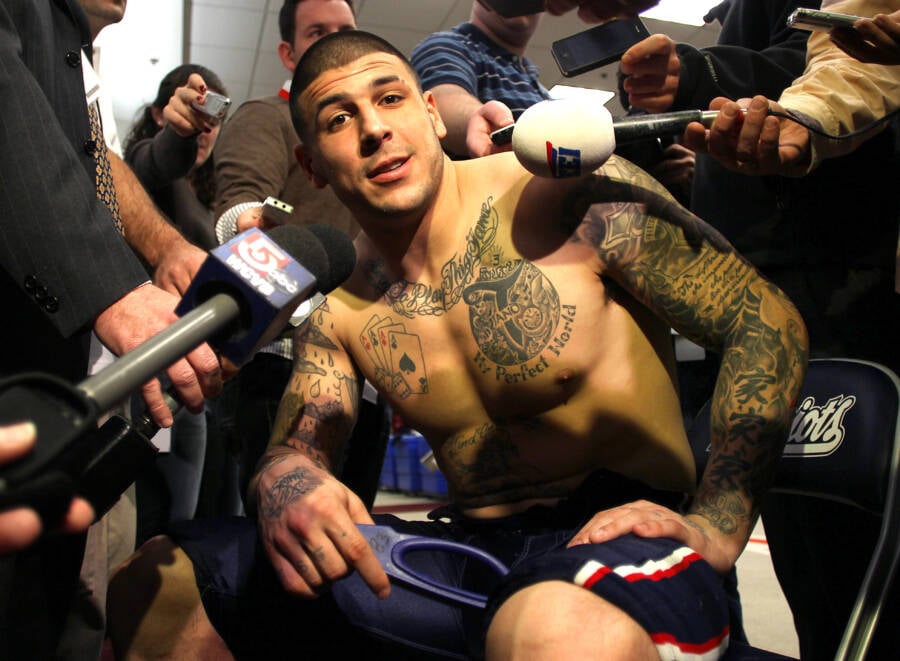 Attending a Jenkins family gathering with his girlfriend, Lloyd met Aaron Hernandez, who was the fiancee of Shaneah Jenkins’ sister, for the first time. Lloyd and Hernandez lived very different lives — the latter lived in a $1.3 million mansion while Lloyd wore flip-flops that were so old he was practically walking barefoot on the ground — but the pair became fast friends.

To those who knew Lloyd, they understood why someone like Hernandez would nonetheless befriend him. Bandits teammate J.D. Brooks saw Lloyd as an utterly regular, humble man: “I think he just wanted to feed his family and have a good life. He wasn’t about glamour and glitz. He was just a simple guy.”

Bandits receiver Omar Phillips was aware of the friendship Lloyd had formed with Hernandez, though it was one Lloyd rarely if ever bragged about. “Odin said [Hernandez] was a loner,” Phillips said. “[Lloyd] was a loner, too. He was star-struck, but he wasn’t hungry for that lifestyle. That’s not his personality.” 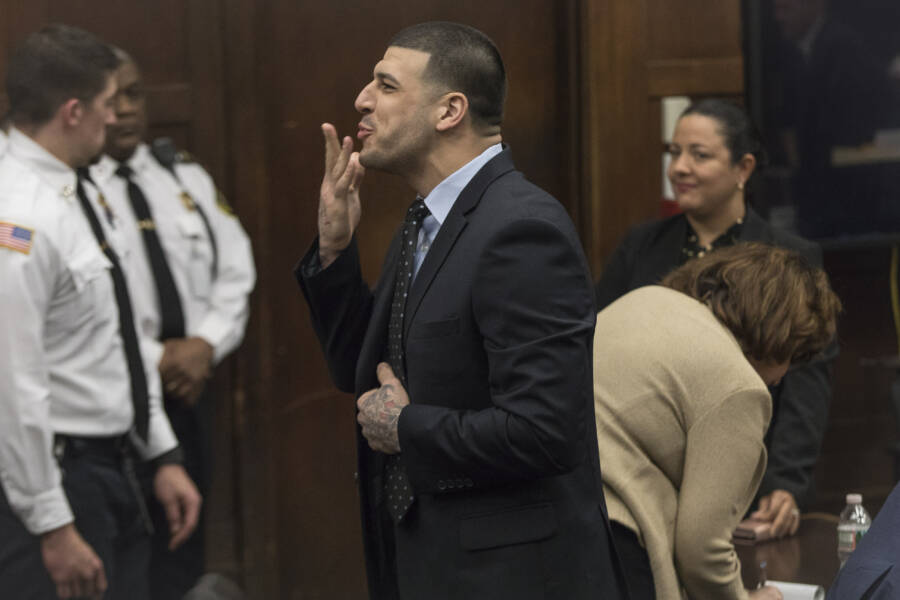 Keith Bedford/The Boston Globe/Getty ImagesAaron Hernandez blowing a kiss to his fiancé, Shayanna Jenkins, while in court for the 2012 killings of Daniel de Abreu and Safiro Furtad. He was later acquitted of the charges. Hernandez committed suicide one week later. April 12, 2017. Boston, Massachusetts.

Unfortunately, what Lloyd wanted wasn’t what mattered as he soon found himself dragged into the fear-driven, unpredictable, and violent currents of Aaron Hernandez’s personal life.

The Murder Of Odin Lloyd

Aaron Hernandez had a string of legal issues under his belt by the time he murdered Odin Lloyd. There were there the bar fight and a double shooting in Gainesville, Florida, in 2007, though he was never charged in either case. Hernandez got into a fight in Plainville, Massachusetts, but the police recognized the by-then-famous player and let him go.

There was the double homicide in Boston in 2012, though Hernandez was acquitted of those murders in 2014, and a shooting in Miami in 2013 for which he was also acquitted. There was only one criminal act that ever stuck to Aaron Hernandez, however, and unfortunately for Odin Lloyd, it was for organizing and executing his murder in 2013. 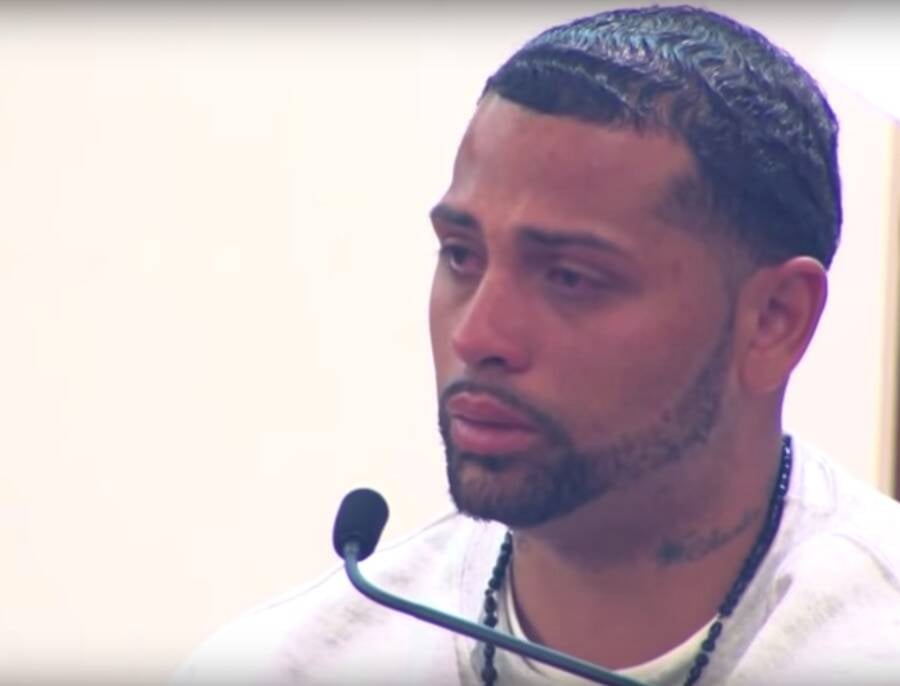 YouTubeCarlos Ortiz (pictured here) and Ernest Wallace were both found guilty of being accessories to murder after the fact. They each received four-and-a-half to seven years in prison.

The inciting event in Lloyd’s murder occurred at a Boston nightclub called Rumor on June 14. Prosecutors asserted that Hernandez was enraged when he saw Lloyd chatting with men whom the NFL star had previously had an altercation. It only took two days for Hernandez to text two out-of-state friends, Carlos Ortiz and Ernest Wallace, to ask for help in dealing with Lloyd’s perceived betrayal.

“You can’t trust anyone anymore,” he wrote them.

After Wallace and Ortiz arrived from Connecticut, Hernandez left his home and got in their car. Then, the three picked up Lloyd at his house around 2.30 a.m. It was the last time Lloyd would be seen alive.

By this point, Lloyd apparently sensed that something was not right but not entirely certain. He texted his sister as the four men were driving around and discussing the night at Rumor.

“Did you see who I am with?” Lloyd wrote. He followed up with another brief message: “NFL.”

The last message he ever sent read, “Just so you know.”

Workers at an industrial park in Boston said they heard gunshots between 3.23 a.m. and 3.27 a.m. Lloyd’s body was discovered in that same park later that day. Five casings from a .45-caliber gun were found near Lloyd’s body, which had five gunshot wounds to his back and side. For people like Mike Branch, frustration with Lloyd’s choices remained even to the end.

“Those thoughts are going through my head,” Branch said. “Odin, if you felt fear, why did you get in the car? It had to be trust, man.”

Hernandez’s involvement in the murder was suspected almost immediately as he was the last person seen with Lloyd, and he was arrested nine days later. He was charged with first-degree murder.

Hernandez had just signed a $40 million extension on his contract with the New England Patriots, a contract that was terminated within hours of his being charged. All corporate sponsorship deals he had were also terminated. When video evidence emerged showing him returning home on the morning of the murder with a gun in his hand, his fate was sealed.

He was found guilty on all charges in Lloyd’s murder in April 2015 and sentenced to life in prison without the possibility of parole.

Though Carlos Ortiz and Ernest Wallace were both charged with first-degree murder, Wallace was acquitted of the murder charge but found guilty of being an accessory after the fact. He received a four-and-a-half to seven-year sentence.

Ortiz, meanwhile, pleaded guilty to accessory after the fact, and received the same sentence in exchange for prosecutors dropping the charge of first-degree murder. 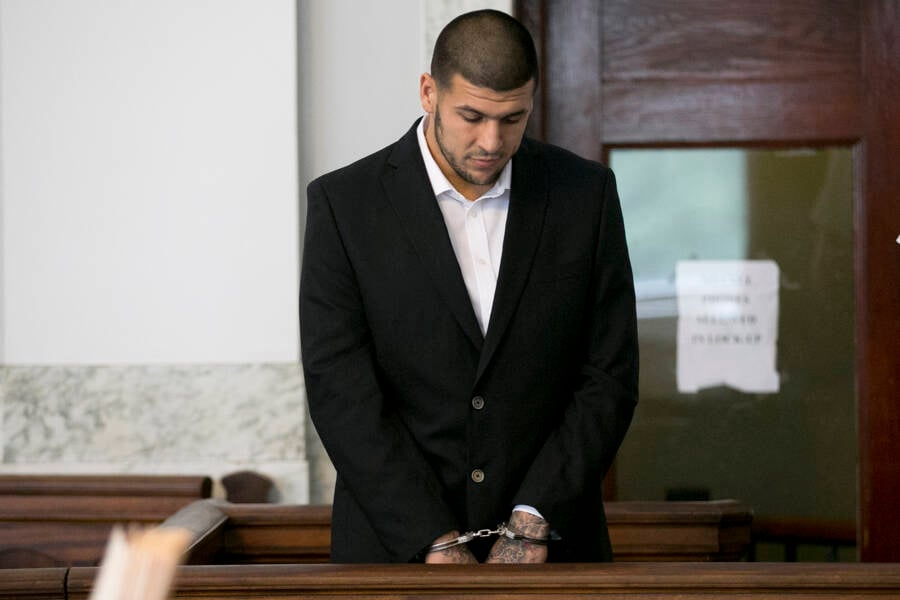 Yoon S. Byun/The Boston Globe/Getty ImagesAaron Hernandez in Attleboro District Court, one month after being arrested as a suspect in the murder of Odin Lloyd. July 24, 2013. Attleboro, Massachusetts.

As for Hernandez, he would only serve two years of his sentence before he took his own life on April 19, 2017, by hanging himself using his bedsheets in his cell. Experts examining his brain post-mortem found a shocking amount of brain damage in the former football star.

Dr. Ann McKee, a neuropathologist who specializes in chronic traumatic encephalopathy (CTE) at Boston University, conducted the examination of Hernandez’s brain. She said she never saw such extensive damage in the brain of an athlete younger than 46.

This and other possible factors in Hernandez’s decision to kill Lloyd were the central focus of the Netflix documentary series Killer Inside: The Mind Of Aaron Hernandez.

In the end, motives for Lloyd’s murder are still not known. Some speculate that Hernandez was afraid Lloyd discovered his alleged homosexuality and feared being exposed, others believe that Lloyd’s alleged disloyalty at the nightclub was the only reason an increasingly paranoid and unstable Hernandez needed. Odin Lloyd’s murder is all the more tragic for its uncertainty.

After reading about the tragic murder of Odin Lloyd by NFL superstar Aaron Hernandez, learn about Stephen McDaniel being interviewed on TV about a murder — one he actually committed. Then, read about the “impossible to ignore” study that shows the strongest link ever between playing football and CTE.