In November 1985, the small town of Armero, Colombia was inundated by a massive mudslide brought on by the eruption of a nearby volcano. Thirteen-year-old Omayra Sánchez was buried in a giant vat of debris and neck-deep water. Rescue efforts were futile and, after three days trapped up to her waist in mud, the Colombian teenager died.

French photographer Frank Fournier, who stayed by the dying girl’s side until she drew her last breath, captured her horrifying ordeal in real time.

This is the tragic story of Omayra Sánchez. 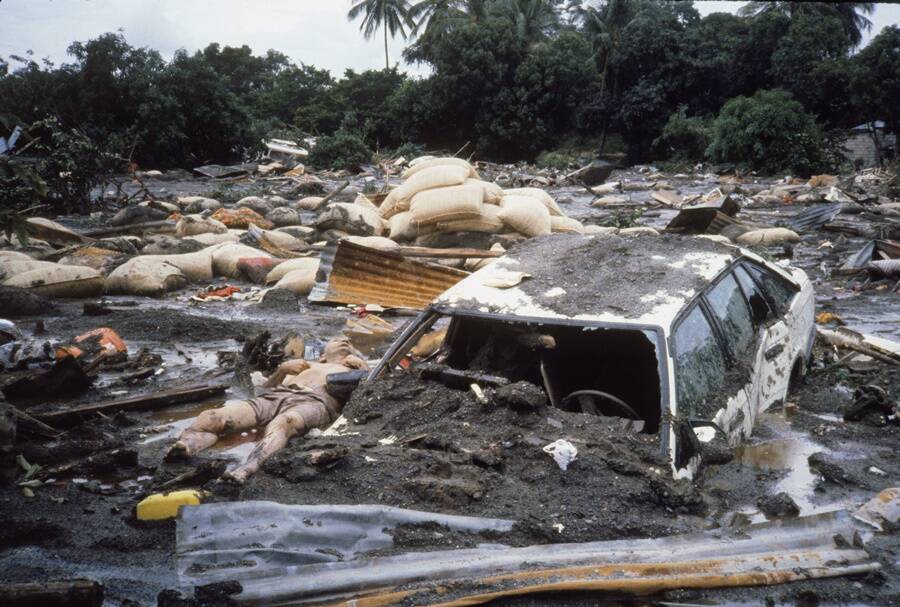 Bernard Diederich/The LIFE Images Collection/Getty Images/Getty ImagesThe eruption of the nearby Nevado del Ruiz volcano and subsequent mudslide claimed over 25,000 lives in the town of Armero.

The Nevado del Ruiz volcano in Colombia, at a height of 17,500 feet above sea level, had shown signs of activity since the 1840s. By September 1985, the tremors had become so powerful that it began to alarm the public, mostly residents in nearby towns such as Armero, a town of 31,000 that was about 30 miles east of the volcano’s center.

On Nov. 13, 1985, the Nevado del Ruiz erupted. It was a small explosion, melting between five and 10 percent of the ice cap that covered the Arenas Crater, but it was enough to trigger a devastating lahar, or mudflow.

Running at a speed of roughly 25 mph, the mudflow reached Armero and covered 85 percent of the city in thick, heavy sludge. The city’s roadways, houses, and bridges were destroyed, engulfed by mudflows up to a mile wide.

The flood also trapped residents trying to flee, many of them unable to escape the sheer force of the mud that burst into their small town. 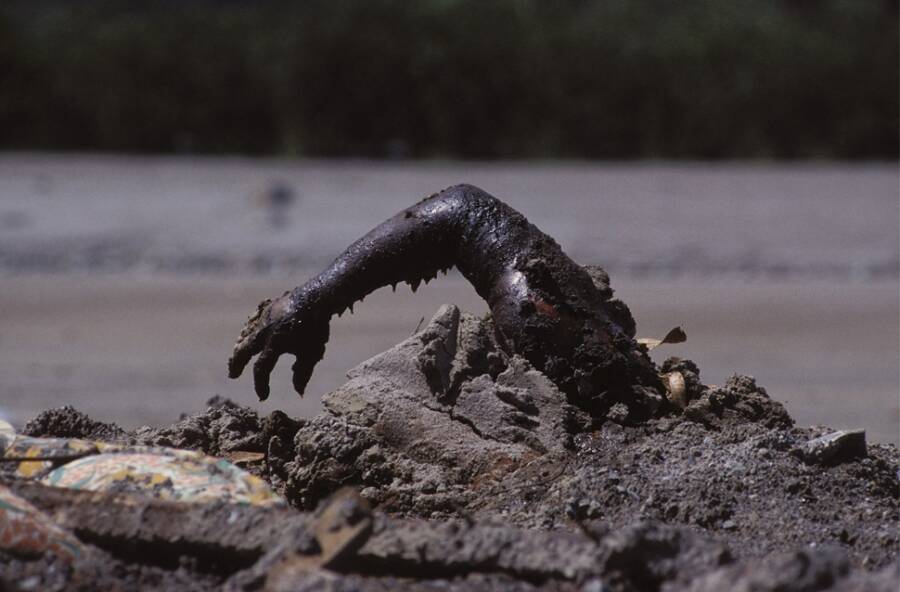 Chip HIRES/Gamma-Rapho/Getty ImagesThe hand of a victim buried by mudslide from the volcanic eruption.

While some were lucky enough only to suffer injuries, most of the town’s people perished. As many as 25,000 people died. Only a fifth of Armero’s population survived.

Despite the incredible devastation, it would take hours before initial rescue efforts began. This left many — like Omayra Sánchez — to endure long, terrifying deaths trapped beneath the mud.

The Failed Rescue Of Omayra Sánchez

In this 1985 Spanish-language news broadcast, Omayra Sánchez speaks with reporters while nearly drowning in muddy water.

Photojournalist Frank Fournier arrived in Bogotá two days after the eruption. After a five-hour drive and a two-and-a-half-hour walk, he finally made it to Armero, where he planned to capture the rescue efforts on the ground.

But when he got there, conditions were much worse than he had imagined.

Instead of an organized, fluid operation to save many of the residents that were still trapped under debris, Fournier encountered chaos and desperation.

“All around, hundreds of people were trapped. Rescuers were having difficulty reaching them. I could hear people screaming for help and then silence – an eerie silence,” he told the BBC two decades after the horrifying disaster. “It was very haunting.”

Amid the chaos, a farmer took him to a little girl who needed help. The farmer told him that the girl had been trapped under her destroyed house for three days. Her name was Omayra Sánchez. 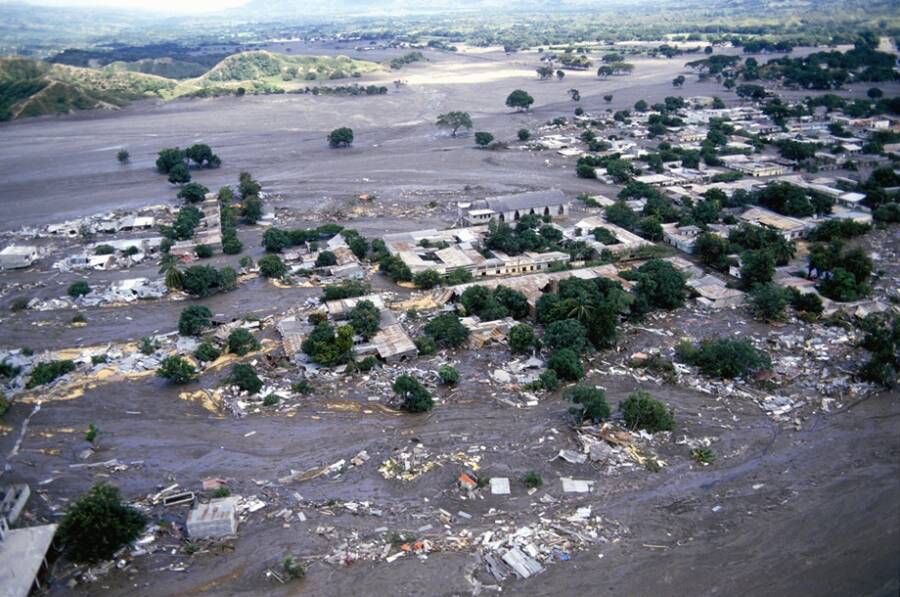 Jacques Langevin/Sygma/Sygma/Getty ImagesThe dvastation in the town of Armero, Colombia after the eruption of Nevado del Ruiz.

Rescue volunteers from the Red Cross and local residents tried to pull her out, but something below the water surrounding her had pinned her legs, making her unable to move.

Meanwhile, the water engulfing Sánchez got higher and higher, partly due to continuous rains.

By the time Fournier reached her, Sánchez had been exposed to the elements for too long, and she began to float in and out of consciousness.

“I’m going to miss a year because I haven’t been to school for two days,” she told Tiempo reporter German Santamaria, who was also at her side. Sánchez asked Fournier to take her to school; she was worried she would be late. 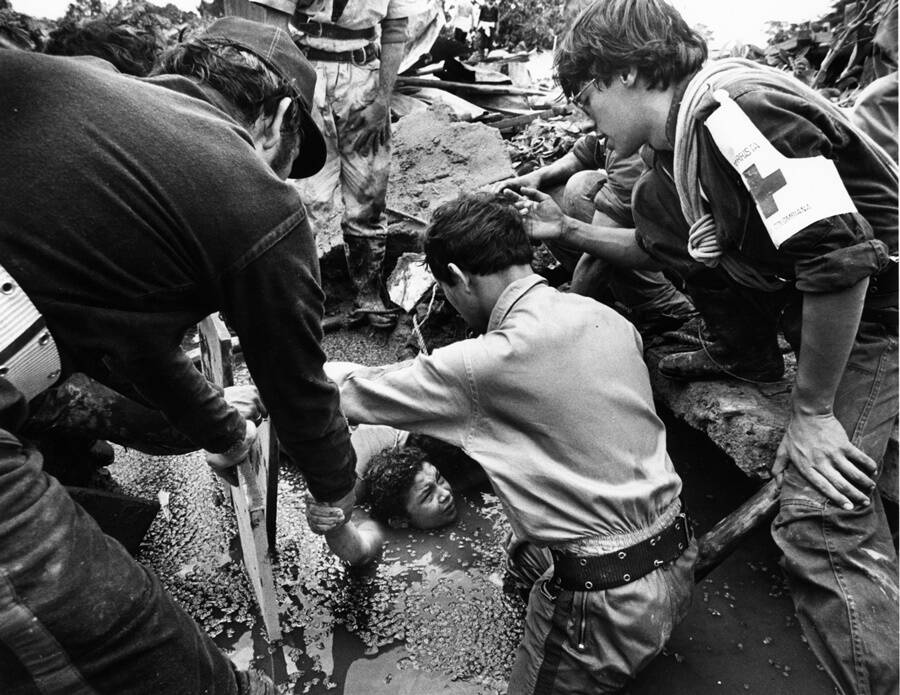 The photographer could feel her strength weaken, as if the teenager was ready to accept her fate. She asked volunteers to let her rest, and bid her mother adiós.

When she died at 9:45 A.M. today, she pitched backward in the cold water, an arm thrust out and only her nose, mouth and one eye remaining above the surface. Someone then covered her and her aunt with a blue and white checked tablecloth.

Her mother, a nurse named Maria Aleida, received the news of her daughter’s death during an interview with Caracol Radio.

She wept silently while radio hosts asked listeners to join in a moment of silence out of respect for the 13-year-old’s tragic death. Much like her daughter, Aleida showed strength and courage following her loss. 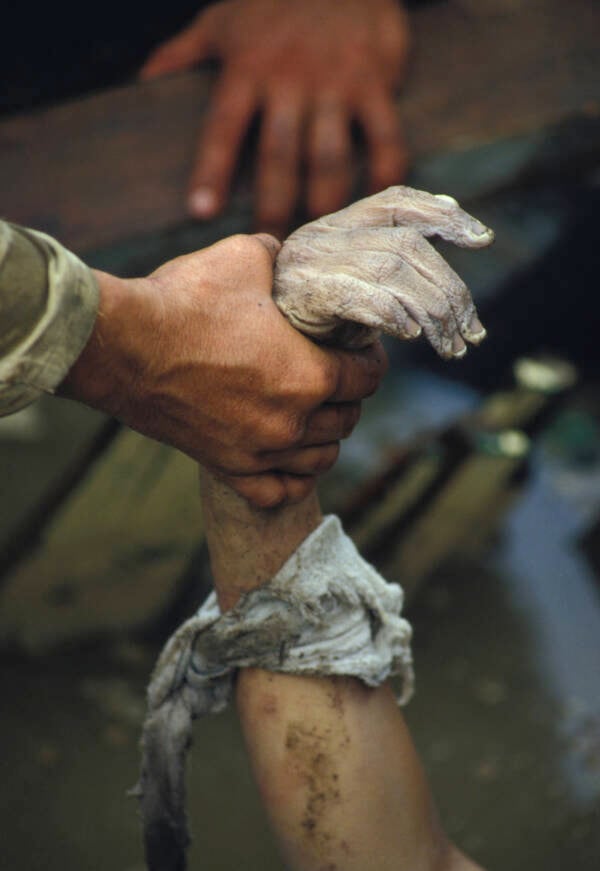 “It is horrible, but we have to think about the living,” Aleida said, referring to survivors like herself and her 12-year-old son Alvaro Enrique, who lost a finger during the disaster. They were the only survivors from their family.

“When I took the pictures I felt totally powerless in front of this little girl, who was facing death with courage and dignity,” Fournier remembered. “I felt that the only thing I could do was to report properly… and hope that it would mobilize people to help the ones that had been rescued and had been saved.”

Fournier got his wish. His photograph of Omayra Sánchez — black-eyed, drenched, and hanging on for dear life — was published in Paris Match magazine a few days later. The haunting image won him the 1986 World Press Photo of the Year — and elicited public outrage.

Outrage In The Aftermath 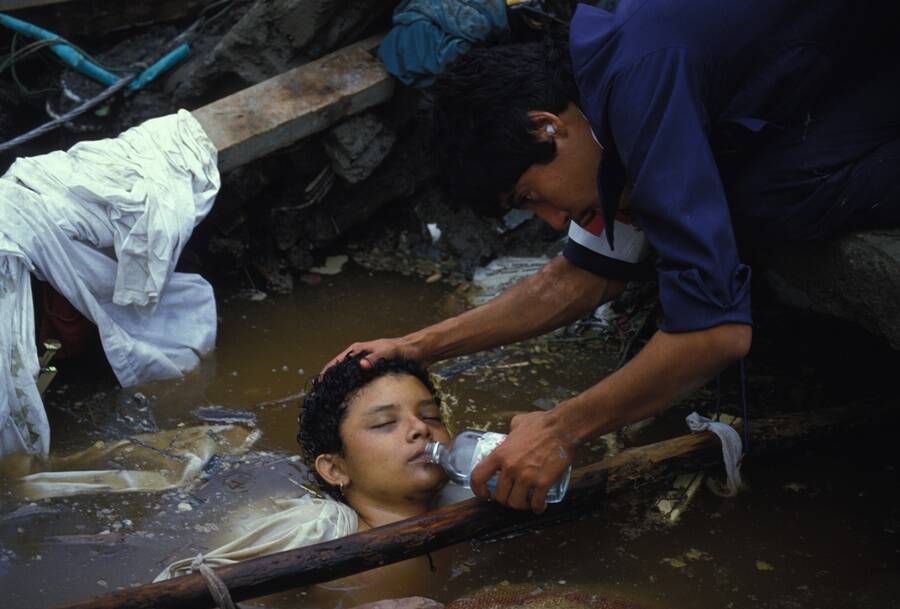 Bouvet/Duclos/Hires/Gamma-Rapho/Getty Images“She could sense that her life was going,” said photojournalist Frank Fournier who photographed Omayra Sánchez in her last moments.

The well-documented slow death of Omayra Sánchez confounded the world. How could a photojournalist just stand there and watch a 13-year-old girl die?

Fournier’s iconic photograph of Sanchez’s suffering was so disturbing that it spurred an international backlash against the Colombian government’s practically nonexistent rescue efforts.

Witness accounts from volunteer rescue workers and journalists on the ground described a grossly inadequate rescue operation that was wholly lacking in both leadership and resources.

In Sánchez’s case, rescuers didn’t have the equipment needed to save her — they didn’t even have a water pump to drain the rising water around her. 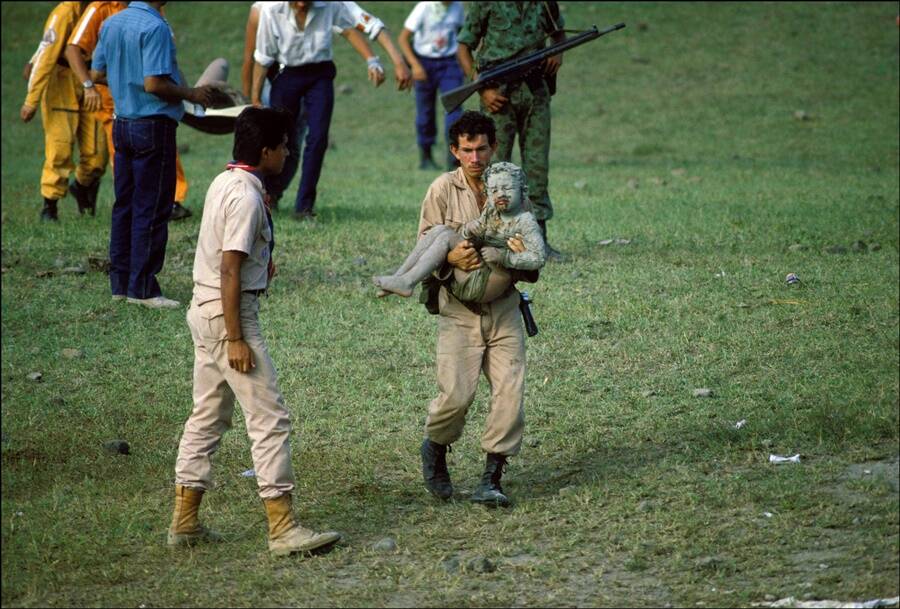 Bouvet/Duclos/Hires/Gamma-Rapho/Getty ImagesAt least 80 percent of the small town vanished under the flood of mud and water from the eruption.

Later it would be discovered that Omayra Sánchez’s legs had been trapped by a brick door and her dead aunt’s arms underneath the water. But even if they had figured that out earlier, rescuers still didn’t have the heavy equipment necessary to pull her out.

Journalists at the scene reportedly saw only a few Red Cross volunteers and civil defense workers along with friends and families of victims raking through the mud and rubble. None of Colombia’s 100,000-person army or 65,000-member police force were dispatched to join rescue efforts on the ground.

Gen. Miguel Vega Uribe, Colombia’s minister of defense, was the highest-ranking official in charge of the rescue. While Uribe acknowledged the criticisms, he argued that the government did all it could.

“We are an underdeveloped country and don’t have that kind of equipment,” Uribe said.

The general also stated that if troops had been deployed, they wouldn’t have been able to get through the area because of the mud, responding to criticisms that the troops could have patrolled the perimeter of the mudflow. 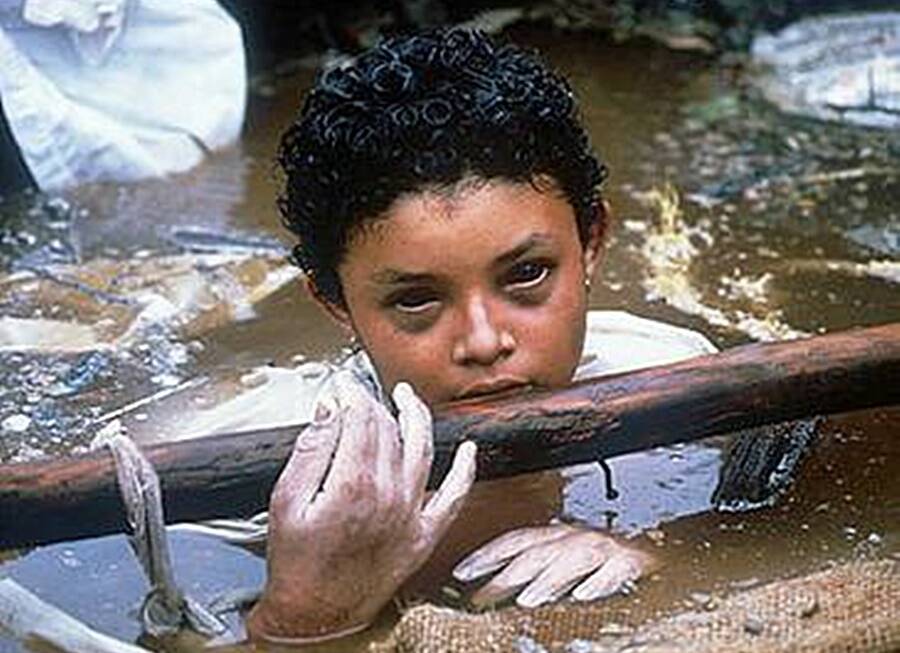 Officials in charge of the rescue operation also denied statements from foreign diplomats and rescue volunteers that they had refused offers from teams of foreign experts and other aid for the operation.

While evidently, some friendly countries were able to send over helicopters — the most efficient way to transport survivors to improvised triage centers set up in nearby towns unaffected by the volcano — and put up mobile hospitals to treat the injured, it was already too late.

Many of those who were fortunate enough to survive the terrifying natural disaster suffered grave injuries to their skulls, faces, chests, and abdomens. At least 70 survivors had to undergo amputations due to the severity of their injuries.

The public outcry over Omayra Sánchez’s death also sparked debate over the vulturistic nature of photojournalism.

“There are hundreds of thousands of Omayras around the world — important stories about the poor and the weak and we photojournalists are there to create the bridge,” Fournier said of the criticisms. The fact that people still find the photograph utterly disturbing, even decades after it was taken, shows Omayra Sánchez’s “lasting power.”

“I was lucky that I could act as a bridge to link people with her,” he said.

Now that you’ve read about the tragic death of Omayra Sánchez and her unforgettable photograph, find out more about the devastation of Mount Pelée, the worst volcanic disaster of the 20th century. After that, read about Bobby Fuller, the rising 23-year-old rockstar who suffered an abrupt demise.