To this day, no one knows why the Nazis killed hundreds at Oradour-sur-Glane, the site of one of World War II's most brutal massacres. 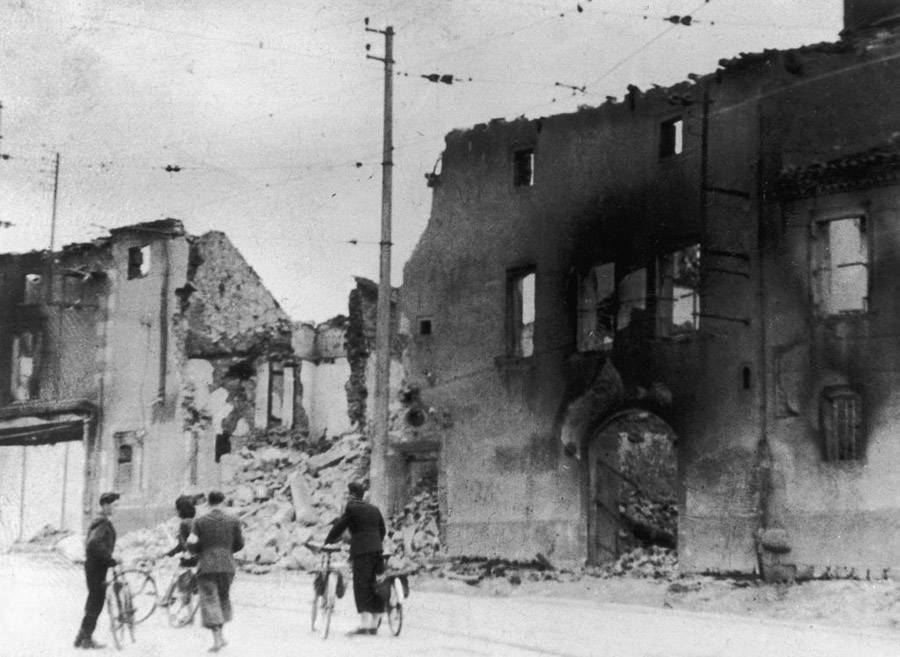 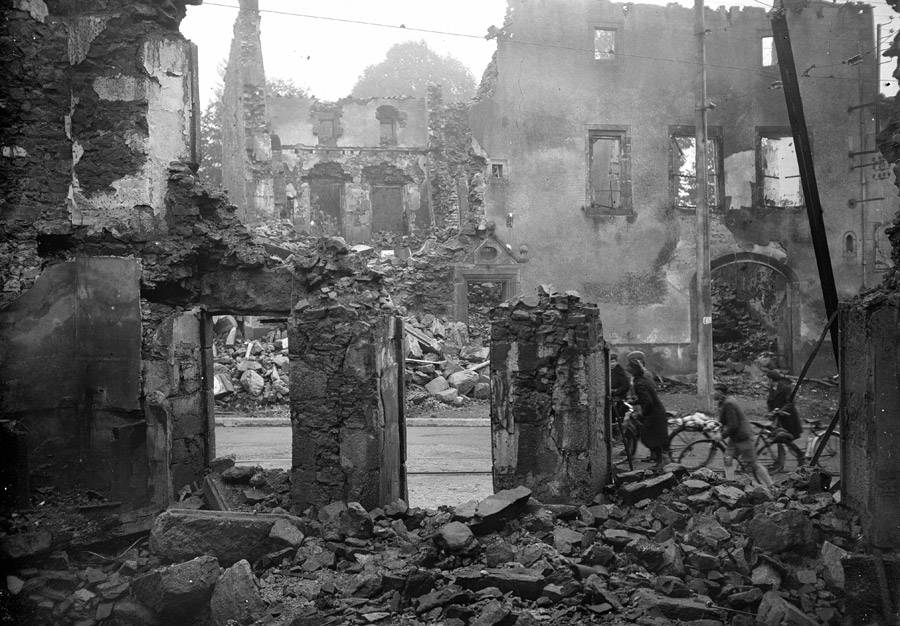 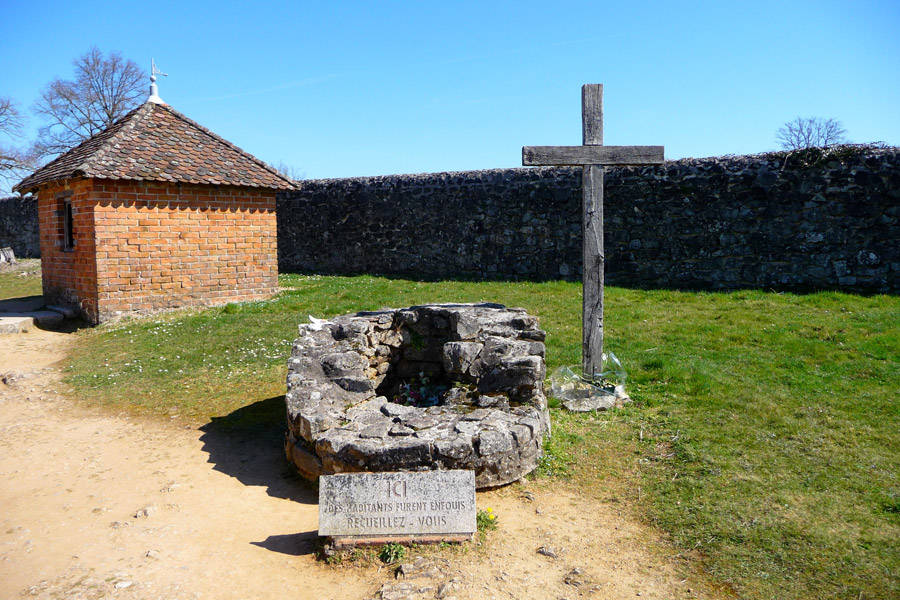 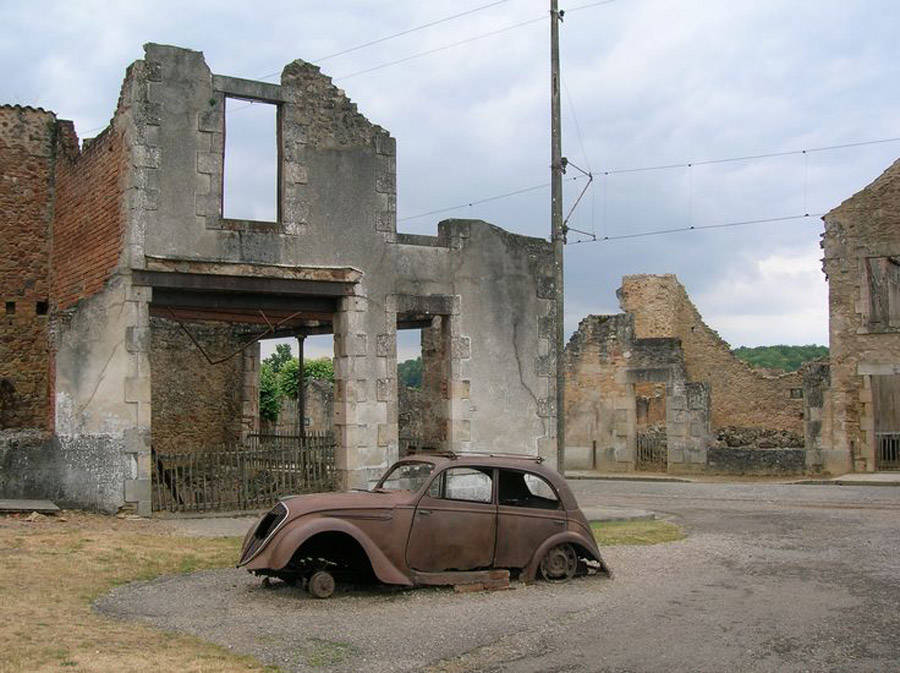 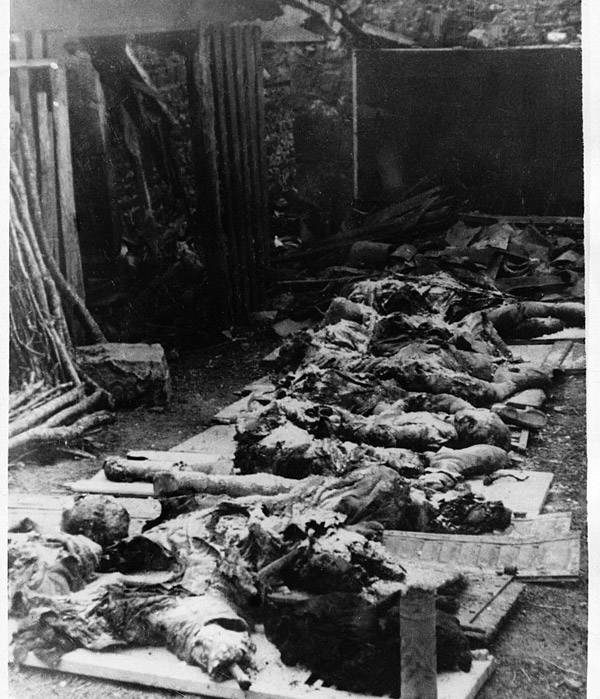 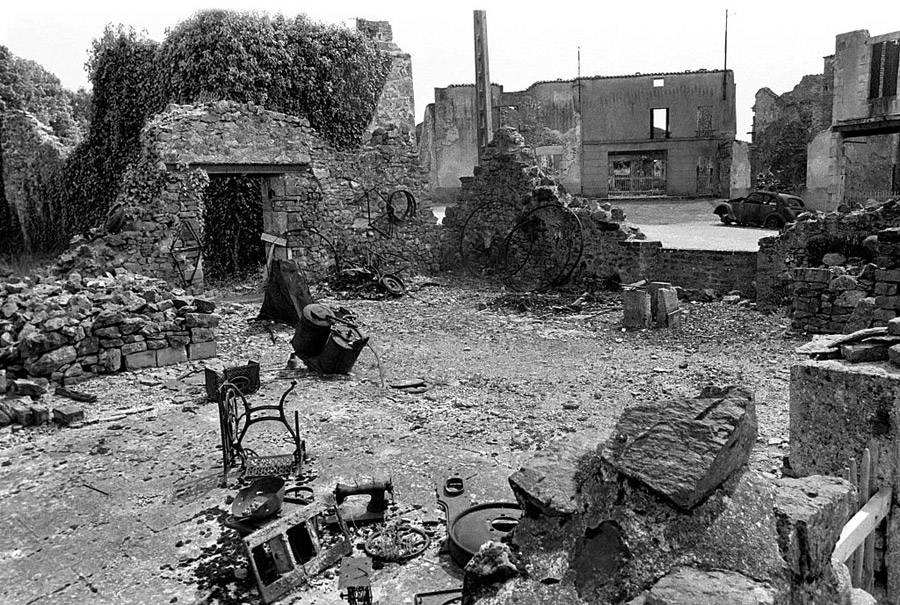 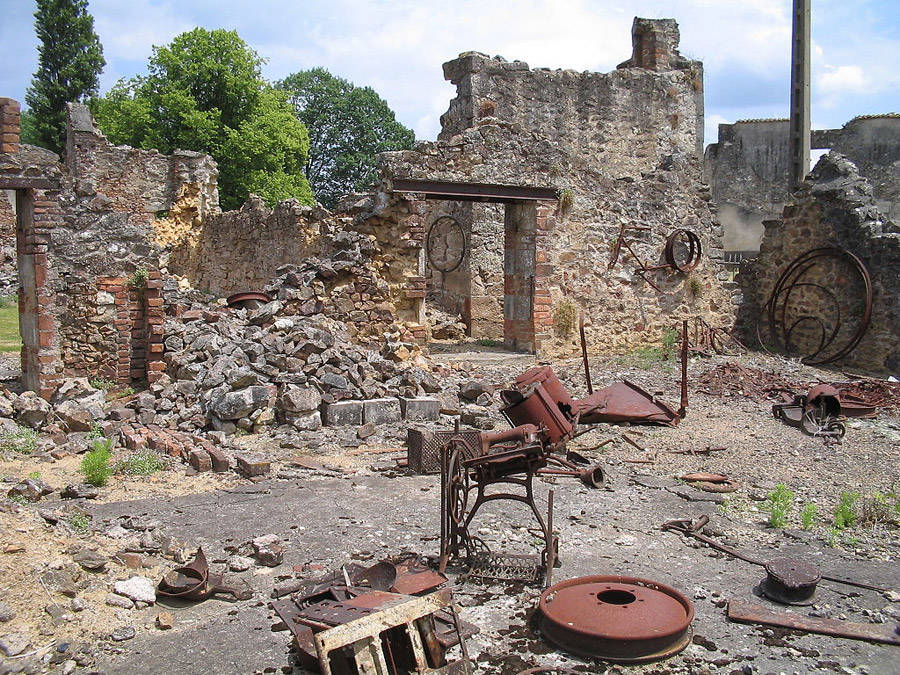 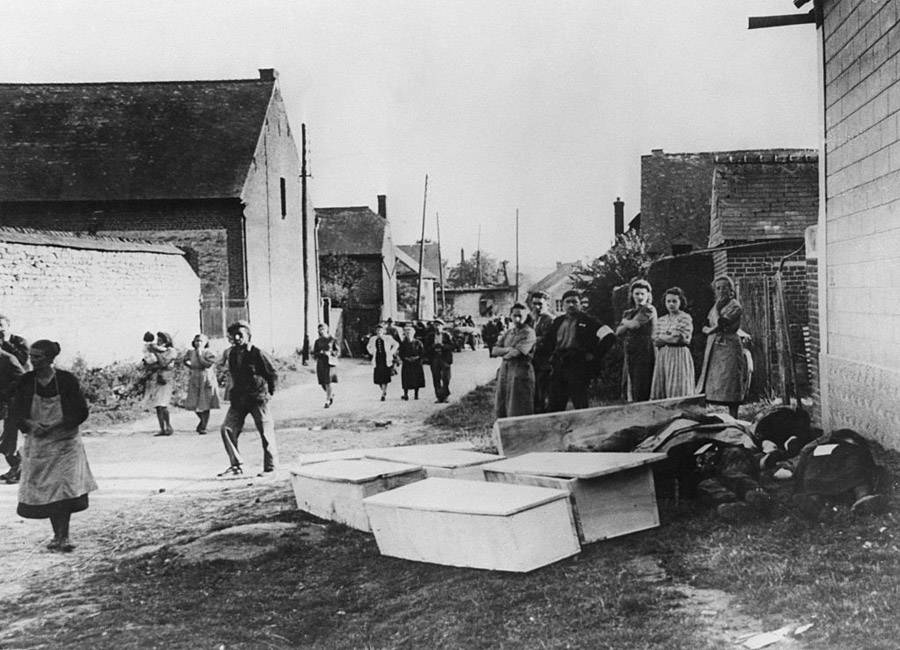 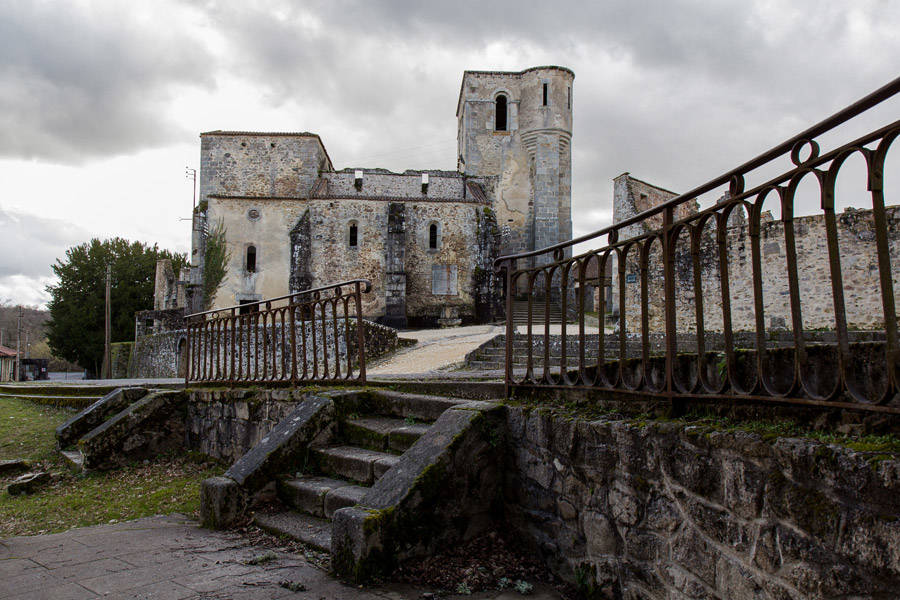 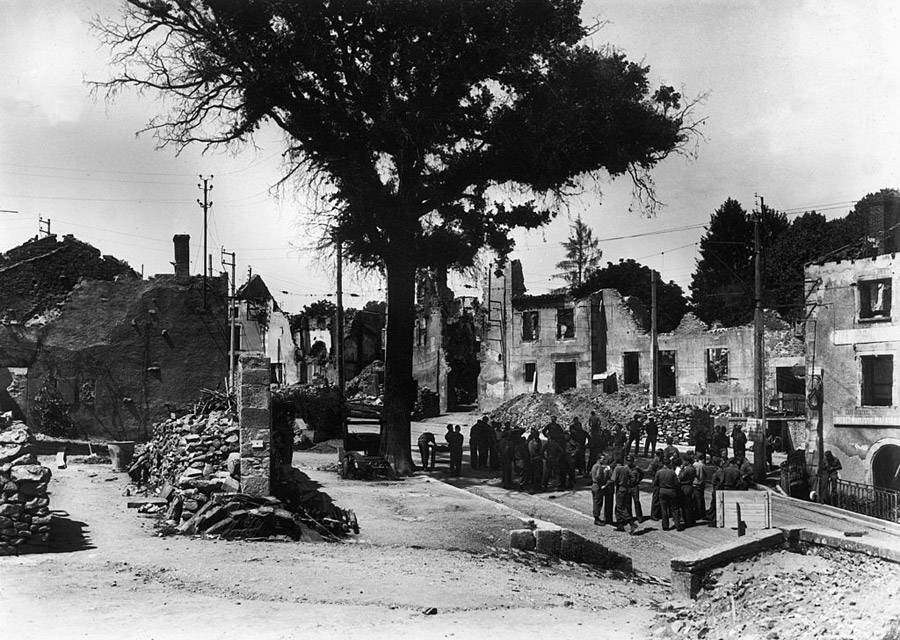 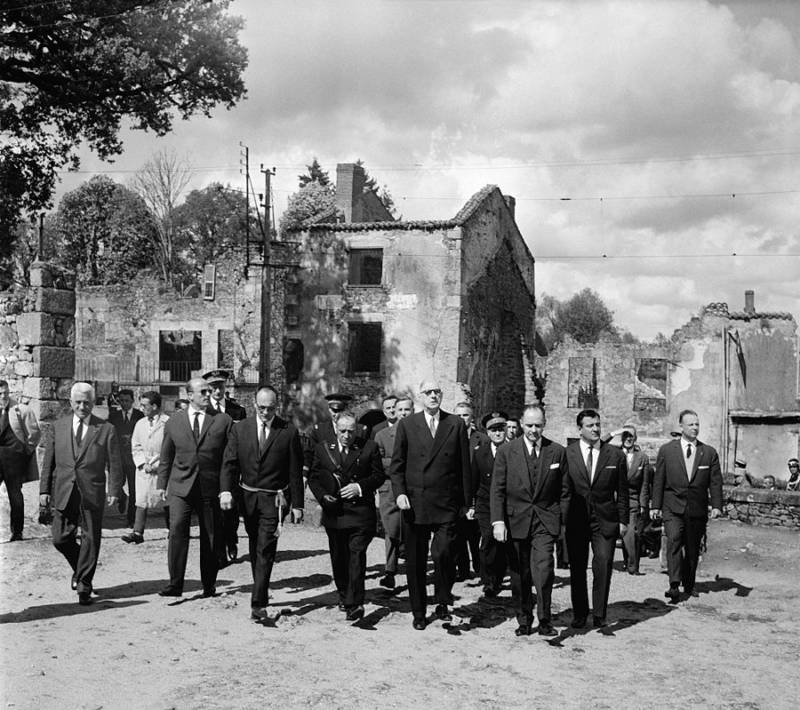 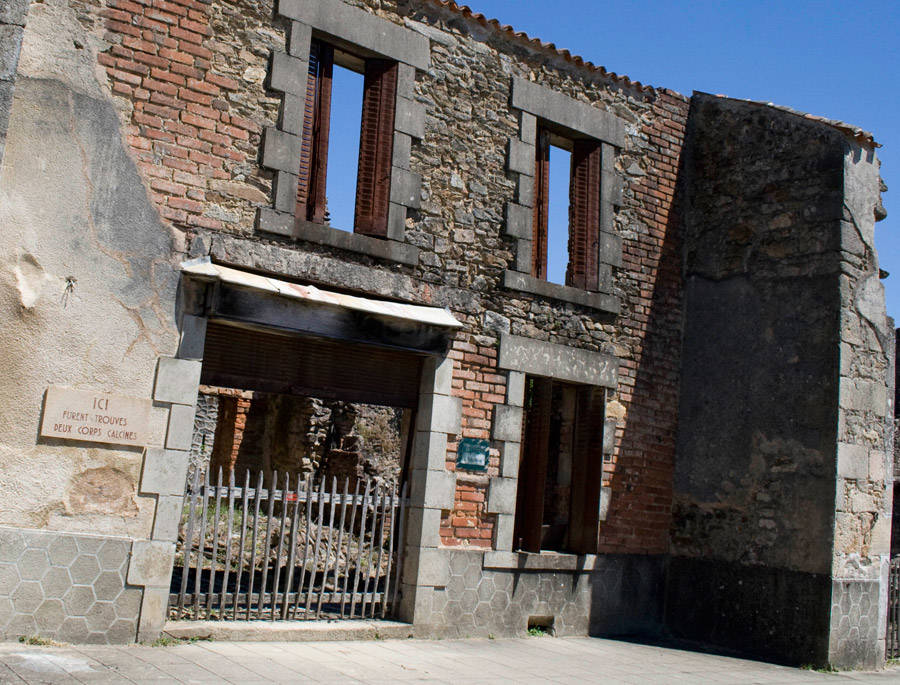 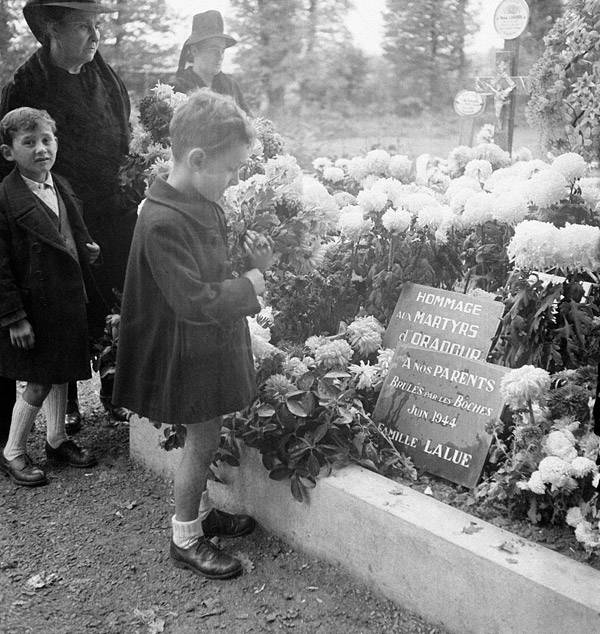 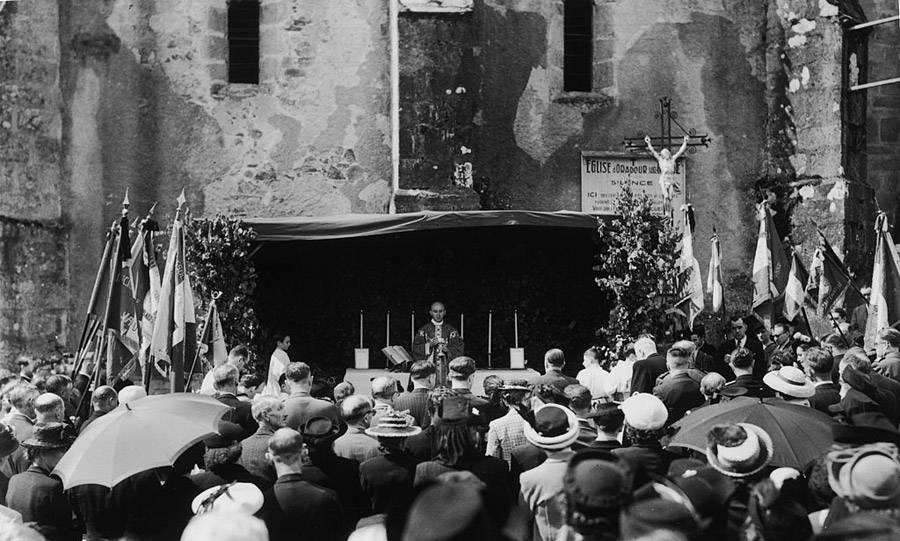 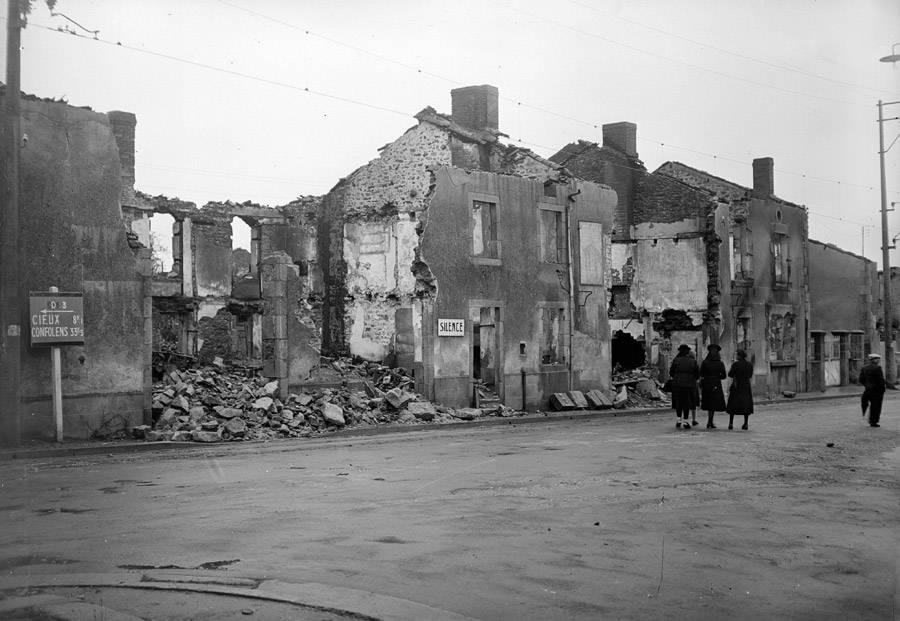 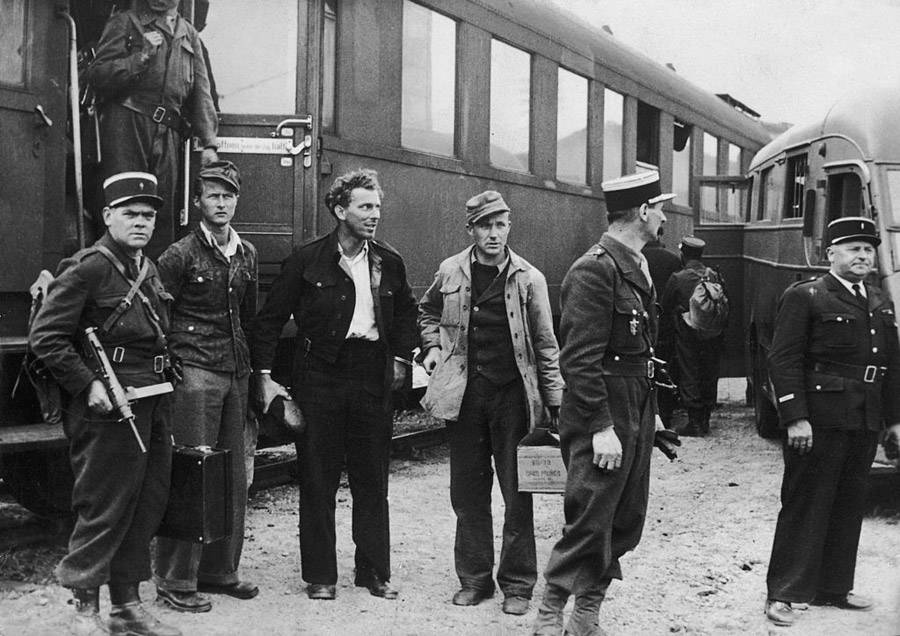 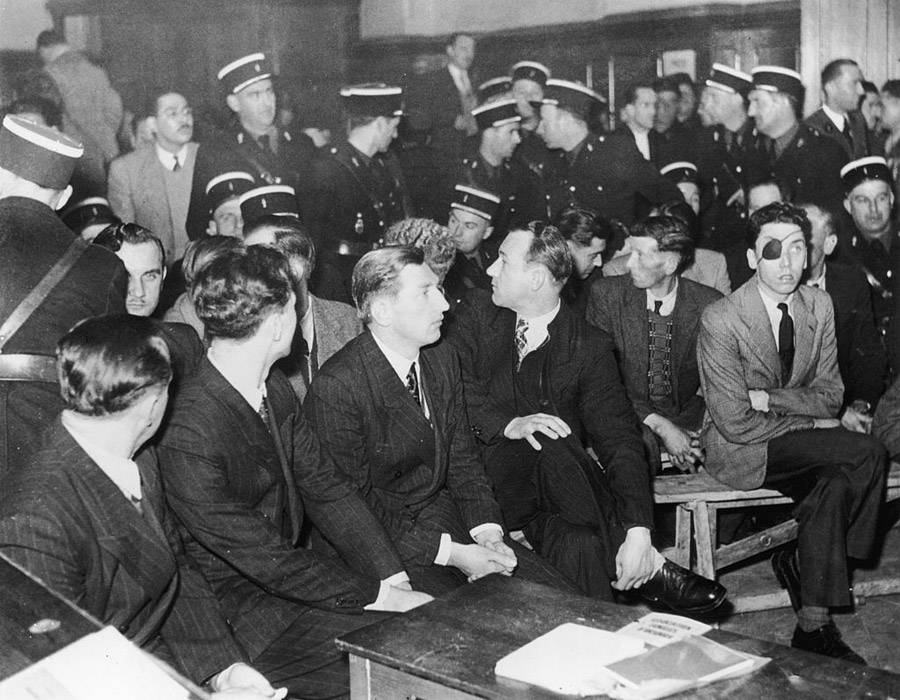 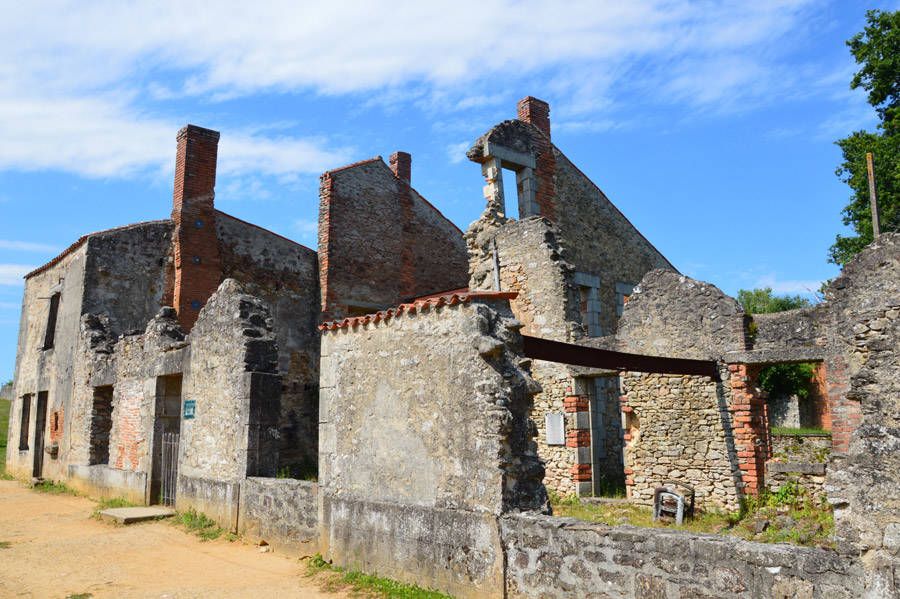 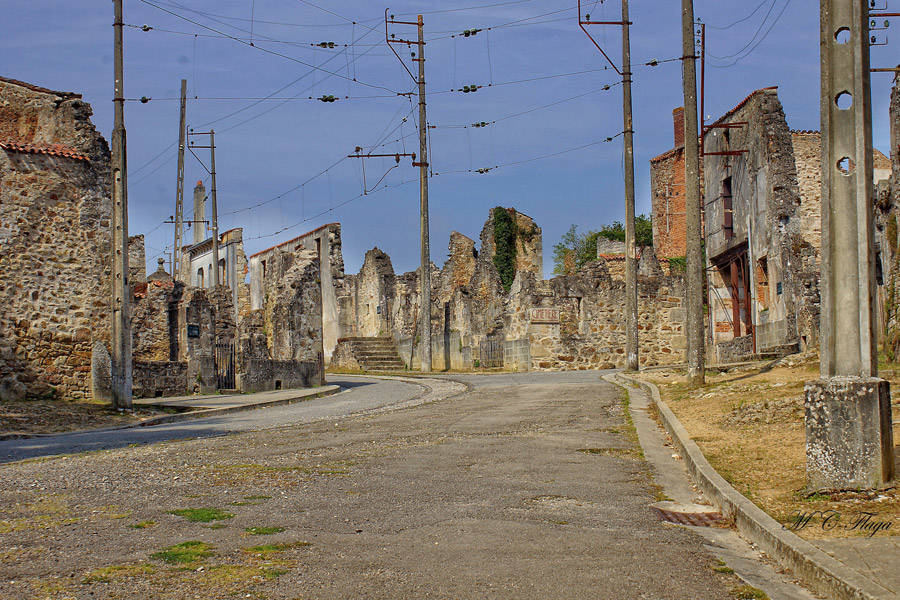 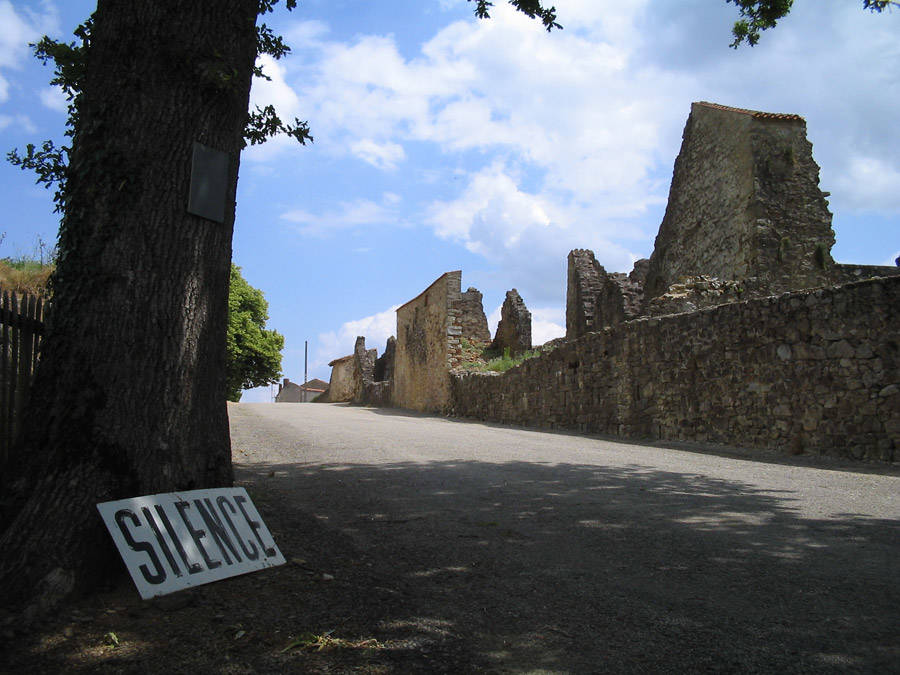 1 of 21
Bombed and burnt-out shells of houses are all that remain in the French village of Oradour-sur-Glane, where more than 600 people were murdered for reasons unclear. June 10, 1944.Keystone/Getty Images
2 of 21
A few men can be seen pushing their bikes through the bombed-out village where destroyed buildings once housed families and businesses. November 1944.LAPI/Roger Viollet/Getty Images
3 of 21
Rescue workers recovered several bodies from the bottom of this well.

The sign reads "Inhabitants were buried here. Collect your thoughts." 2009.TimothyRoach/Flickr
4 of 21
This 2007 photo shows the car that belonged to Dr. Desourteaux.

The doctor had returned to Oradour after visiting a patient while the round-up of the villagers was taking place. He would be killed as well.SarahF/Flickr
5 of 21
A row of the burnt corpses of the villagers of Oradour-sur-Glane.

Only seven of the 750 inhabitants survived the massacre at the hands of the German SS. 1944. Hulton-Deutsch Collection/CORBIS/Corbis via Getty Images
6 of 21
Other than natural decay, almost nothing has changed in the village over the decades with many items being left where they lay at the time of the massacre. June 1980. WATFORD/Mirrorpix/Mirrorpix via Getty Images
7 of 21
The remains of a rusted and mangled bicycle and sewing machine can be seen in the modern day rubble of this home in Oradour-sur-Glane. 2004.Dna Dennis/Wikimedia Commons
8 of 21
People stand beside coffins of those who were murdered by the Nazis at Oradour-sur-Glane in 1944. Bettmann/Getty Images
9 of 21
The town's empty church sits quietly in the distance in this 2014 photo.

The church was the main site for the killing of the women and children, over 400 died here in the afternoon of June 10, 1944.Jean-Luc/Flickr
10 of 21
After the liberation of the Limousin region by the interior French forces in August 1944, American troops are seen entering the village of Oradour-Sur-Glane.Keystone-France/Gamma-Keystone via Getty Images
11 of 21
French General Charles De Gaulle makes a visit to Oradour-Sur-Glane in January 1962, accompanied by officials and his bodyguard. Keystone-France/Gamma-Rapho via Getty Images
12 of 21
This 2008 photo show's the town's bakery that was used as a crematorium, where the skeletons of two bodies were found.

One of them being a baby's skeleton in the bakery's back oven. Mike Jones/Flickr
13 of 21
A young boy pays his respects at the cemetery for the victims of Ouradour-sur-Glane. 1945. Keystone-France\Gamma-Rapho via Getty Images
14 of 21
People gather at Oradour-sur-Glane for a commemorative mass "In Memory Of The Martyrs Of The Oradour-Sur-Glane Massacre" on the occasion of French politician Paul Ramadier's visit. June 11, 1949.Keystone-France/Gamma-Keystone via Getty Images
15 of 21
A few passerby walk the streets of the now unrecognizable village after being burned to the ground by Nazis. November 1944. LAPI/Roger Viollet/Getty Images
16 of 21
A convoy of German soldiers arrives at the trains station in Bordeaux to stand trial before a military court for the massacre at Oradour-Sur-Glane. April 22, 1949 .Keystone-France/Gamma-Keystone via Getty Images
17 of 21
The men accused of the massacre at the village of Oradour-sur-Glane face the Bordeaux Military Tribunal. Men, women and children were annihilated by German forces on 10th June 1944, for reasons which remain unclear.

The 21 men charged with the crime, including Prestel, Weber, Niess, Ochs, Lohner, Giedinger, Grienenberger, Graff, Daul, Elsaesser and Hoehlinger, were released shortly after the end of the trial, January 14, 1953.Keystone-France/Gamma-Keystone via Getty Images
18 of 21
A portion of the town's hotel still stands in this 2013 photo.

The hotel was run by the Avril family where during the massacre three children hid until they were driven out by smoke and fire where upon exiting they ran into an SS trooper who turned a blind eye while they made their escape. Pascal Chotard/Flickr
19 of 21
The empty city streets of Oradour-sur-Glane with the only sign of modern life being the power lines running overhead. 2012. Marie Clair Flaga/Flickr
20 of 21
The entrance to Oradour-sur-Glane, asking visitors to adhere to the request of silence in a show of respect for those who perished at the hand of German soldiers. 2004.Dna Dennis/Wikimedia Commons
21 of 21 On the afternoon of June 10, 1944, 642 men, women, and children were murdered in the village of Oradour-sur-Glane, France gunned down by troops of the German army's 2nd SS Panzer Division. Following the massacre, the bodies were either burned by the Nazi soldiers or left where they lay as the men looted the town and set it ablaze before leaving.

One of the most chilling questions surrounding the event is the reason why these troops massacred all but seven people in the entire village. No official cause for such unjust carnage has ever been confirmed, and nearly all participants and survivors are now deceased.

The small French village wasn't near any major points of conflict and should have been relatively out of harm's way from German soldiers. Reports say the German division had been previously stationed in the southern French town of Valence-d'Agen, and on the morning of June 10, moved into Oradour-sur-Glane, supposedly to pick up SS officer Helmut Kämpfe, who German officers claimed was being held captive in the village.

Upon arriving in the quaint village, senior officer Adolf Diekmann ordered all inhabitants into the town square with their identity papers in hand. Again, what circumstances exactly led to the killing are not clear, but the women and children were locked in the church while the men were led into six barns that already had machine guns in place. The men were then gunned down and the barns set on fire, while the troops looted the town.

Showing even harsher cruelty towards the women and children, Diekmann's men then set the church on fire and shot any persons who tried to escape. Diekmann would later claim at his war crimes trial that the massacre was in retaliation for the kidnapping of German officer Helmut Kämpfe. Shockingly, none of the men involved in the ruthless massacre did more than 14 years in prison for their crimes.

The events that took place in Oradour-sur-Glane were so terrible that they essentially ended the village's existence. Following the war, French President Charles de Gaulle ordered that the village not be rebuilt and left as is to serve as a memorial to the innocents who lost their lives.

Next, read up on the Warsaw Ghetto Uprising. Then, learn all about the most outlandish Nazi super weapons.