The Tragic Death Of Otto Warmbier, The American Student Who Was Accused Of Stealing A Poster In North Korea

In 2016, Otto Warmbier was sentenced to 15 years of hard labor for allegedly stealing a propaganda poster from a North Korean hotel, but he suffered a brain injury that rendered him comatose immediately after his trial — and he died without ever telling his side of the story.

Otto Warmbier, a 21-year-old commerce and economics major at the University of Virginia, wanted to go on an adventure before his life became a never-ending stream of banking spreadsheets. So before heading to a semester abroad in Hong Kong, he decided to take a trip to North Korea — a decision that tragically altered the course of his life. 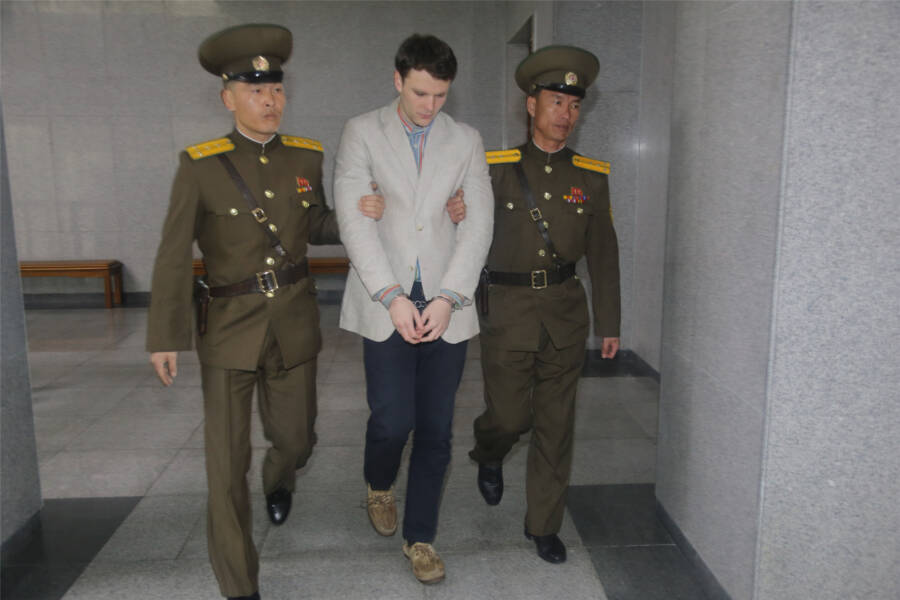 Xinhua/Lu Rui via Getty ImagesOtto Warmbier is escorted to his public trial on March 16, 2016, after being detained by North Korean officials in Pyongyang two months earlier.

The U.S. State Department advised against the journey, and Warmbier’s parents didn’t love the idea, either. But Warmbier was an intelligent young man, a math whiz and a star athlete who had been the salutatorian, homecoming king, and prom king of his Ohio high school. As his mother later said, “Why would you say no to a kid like this?”

Unfortunately, Warmbier’s adventure turned into a nightmare when he was detained by North Korean authorities who accused him of committing a “hostile act against the state.” The crime? Allegedly stealing a propaganda poster.

The 17 months that followed were nothing short of harrowing, but when Otto Warmbier returned home, the true horrors of his imprisonment were revealed: He was in a coma with severe brain damage, and his health was rapidly declining. He died within a week.

To this day, no one knows what really happened to Otto Warmbier while he was being held in North Korea, but his family firmly believes his death was the result of “awful, torturous treatment.”

Otto Warmbier was born in Cincinnati, Ohio on Dec. 12, 1994, the eldest child of Fred and Cindy Warmbier. According to GQ, Warmbier was a well-rounded youth, graduating as the salutatorian of his class and showing prowess as a swimmer and a soccer player. 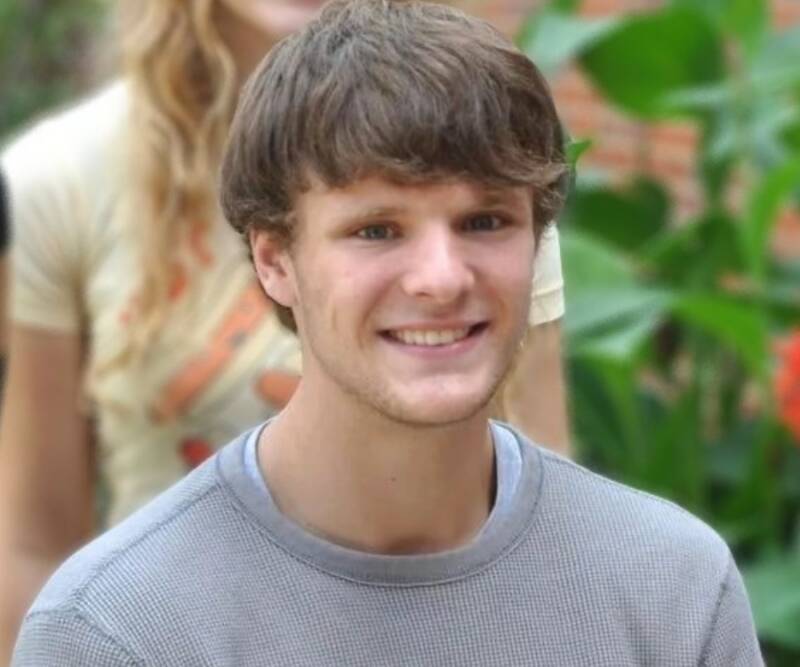 TwitterBefore his trip to North Korea, Otto Warmbier was a promising young student with plans to become an investment banker.

He was awarded the titles of both homecoming and prom king at Wyoming High School, which wasn’t surprising considering his “athletic prowess, classic good looks, and unending charisma,” as a classmate later wrote of him in the Post Independent. “But Otto still felt like everyone’s friend in our small town of Wyoming, Ohio, given his nondiscriminatory friendliness.”

During his salutatorian speech at his high school graduation, Warmbier found himself at a loss for words. He kept things simple, opting to quote The Office: “I wish there was a way to know you’re in the good old days before you’ve actually left them.”

After high school, Warmbier earned a scholarship to the University of Virginia. He was known to be studious and meticulous, and he even joined a fraternity full of “kind of nerdy dudes.” His friends said he put his studies and his family above everything else. 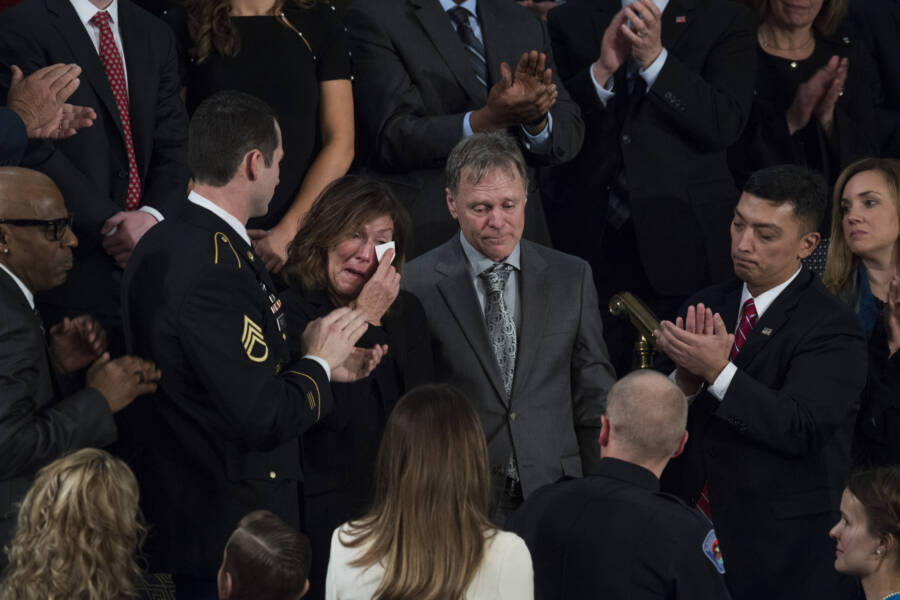 At the end of 2015, Warmbier was preparing to study abroad in Hong Kong the following spring — but he wanted to go on an adventure first. The college junior soon learned about Young Pioneer Tours, a Chinese company that advertised “budget travel to destinations your mother would rather you stayed away from,” according to The New York Times. He signed up for a five-day, four-night “New Year’s Party Tour” to North Korea, and in late December, he boarded a plane to Pyongyang.

Upon their arrival, Warmbier and the other members of his tour group had their cameras confiscated and their smartphones searched for materials that could be considered “subversive” to the North Korean government — and then they entered one of the most repressive countries on Earth.

A Shocking Arrest In North Korea

Otto Warmbier’s roommate during the tour was a British man named Danny Gratton. “From the second I met him we hit it off,” Gratton later told BBC. “He was very bright, intelligent, and likable.” 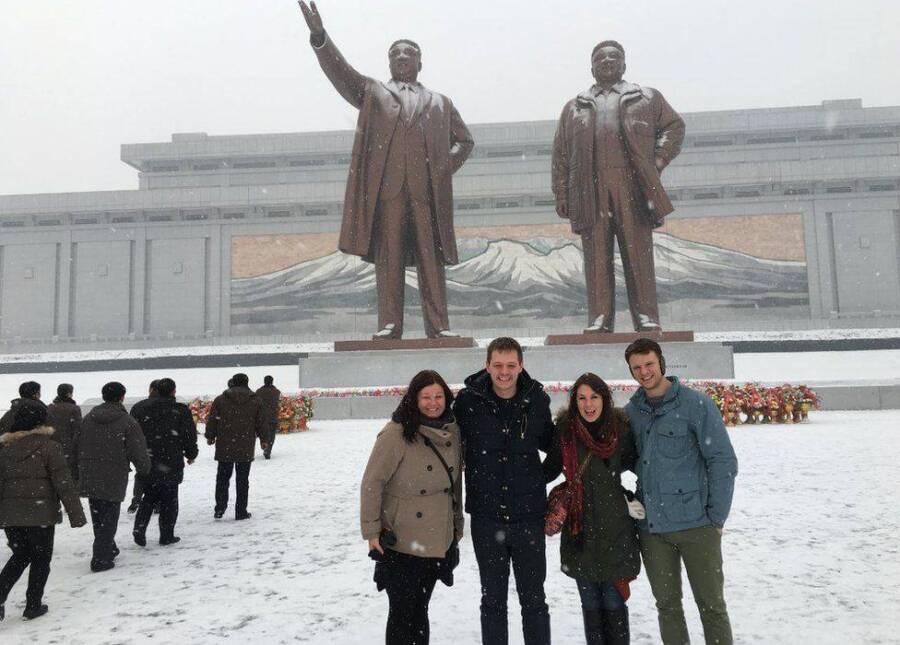 FacebookDanny Gratton (second from the left) and Otto Warmbier (far right) with two other Young Pioneers in front of statues of North Korea’s “supreme leaders.”

The Young Pioneers were situated in a hotel commonly known as the “Alcatraz of Fun.” It sits on an island off the mainland and features five restaurants, a bar, a sauna, a massage parlor, and a bowling alley.

After a New Year’s Eve celebration held in Pyongyang’s main square, the group returned to their isolated hotel. Some headed to the bar, while others, like Gratton, went to the bowling alley. He later recalled that there was a “two-hour window” where nobody could account for Warmbier, but when Gratton got back to their shared room around 4:30 a.m., he found Warmbier sound asleep.

However, authorities had just captured grainy CCTV footage of some unidentifiable person tearing down a propaganda poster in a restricted area of the hotel — and they blamed Otto Warmbier. On Jan. 2, 2016, as the Young Pioneers went through immigration control at Pyongyang before boarding their plane back to China, North Korean officials tapped Warmbier on the shoulder and led him away.

“I made an ironic comment,” Gratton recalled. “I actually said, ‘Well, we won’t be seeing you again.’ He sort of laughed at me, and that was the last we saw of him.”

The “Confession,” Confinement, And Death Of Otto Warmbier

Back in America, Warmbier’s parents had no idea what had happened to their son. He should have been gone for less than a week — but it wasn’t until late January that the North Korean government confirmed they had arrested Warmbier.

A month later, Otto Warmbier made his television debut. 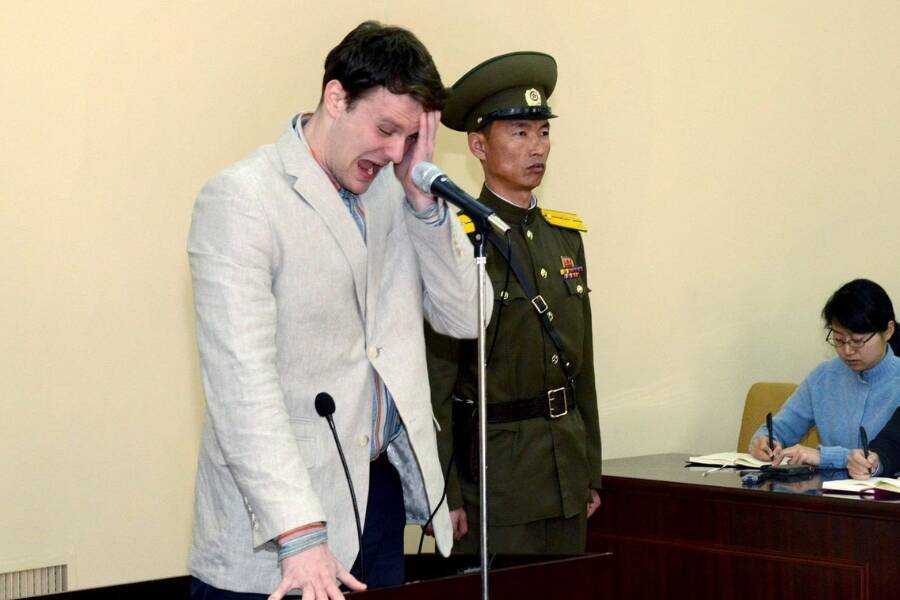 TwitterOtto Warmbier shed tears during his televised “confession” as he commented that he regretted his actions and pleaded to be sent back to America.

Standing in front of two oversized portraits of North Korean “supreme leaders” Kim Il-sung and Kim Jong-il, Warmbier spoke to the cameras and thanked the North Korean government for the “opportunity to apologize for my crime, to beg for forgiveness, and to beg for any assistance to save my life.”

Dressed in a suit and fighting back tears, Warmbier said he attempted to steal the propaganda poster as a “trophy” for a Methodist church back home to “harm the work ethic and motivation of the Korean people.”

Eventually, he could no longer hold the tears back. “I have made the single worst decision of my life,” he cried, “but I am only human.”

Of course, the story Warmbier told during the broadcast was littered with inconsistencies. For instance, Warmbier was Jewish and had no affiliation with a Methodist church. This led many to suspect that the words he spoke weren’t his own.

Regardless, in March 2016, the North Korean government sentenced him to 15 years of hard labor for crimes against the state. Meanwhile, a campaign back in the United States pushed for Warmbier’s return.

It took more than a year, but a delegation of American officials finally brought the young student home in June 2017. Unfortunately, the occasion was anything but happy.

According to Daniel Kanter, one of the doctors who looked after Warmbier, he returned in “a state of unresponsive wakefulness.” He was unable to speak, but he showed “spontaneous eye opening and blinking.” According to the nurses who had cared for him in North Korea, Warmbier had been comatose since the day after his trial in March 2016. He’d never even made it to the labor camp. 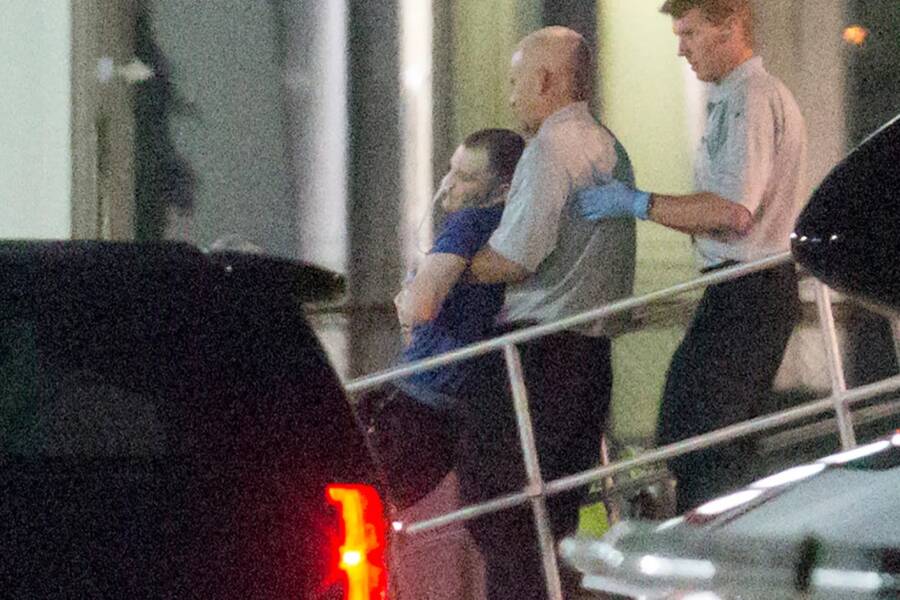 TwitterOtto Warmbier was in a coma with severe brain damage when he returned from North Korea.

North Korea denied allegations that they had abused Warmbier in any way. Officials claimed that Warmbier had contracted botulism and suffered an allergic reaction to a medication. He died on June 19, 2017, surrounded by his family in the hospital.

Fred and Cindy Warmbier never believed North Korea’s story. They firmly believed that their son had been physically tortured while in prison. However, a medical examination found no signs that Warmbier had been beaten, noting that he’d fallen into a coma after suffering from a lack of blood and oxygen to his brain — potentially due to cardiopulmonary arrest.

It’s unlikely that the truth about Otto Warmbier’s suspicious arrest, trial, and death will ever be uncovered. “We don’t know what happened to him,” said coroner Dr. Lakshmi Sammarco, “and that’s the bottom line.”

After learning about the tragic fate of Otto Warmbier, read the story of Lauren Spierer, another college student who vanished without a trace. Or, discover 46 facts about North Korea.