Osceola "Ozzie" Fletcher was a 22-year-old private in the U.S. Army when he was wounded in action on D-Day during the invasion of Normandy in June 1944. 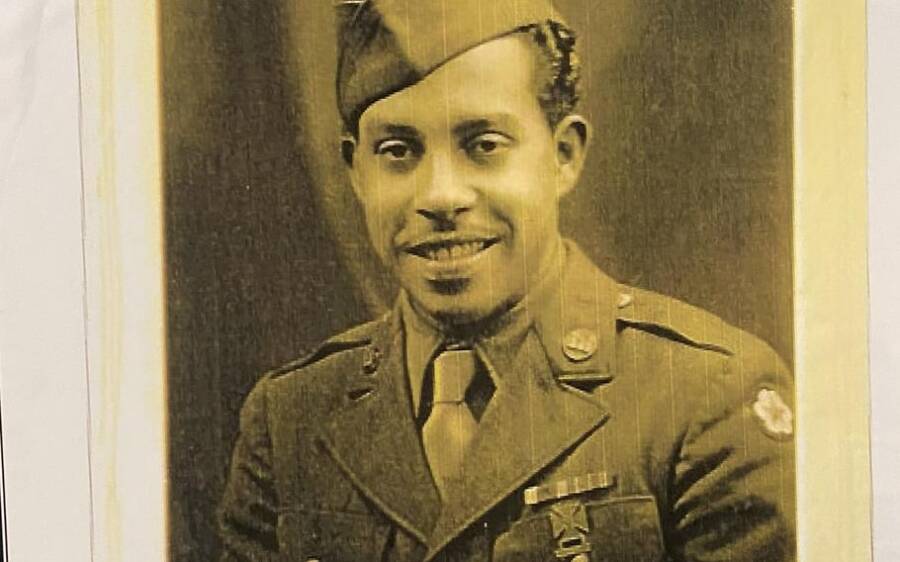 Seventy-six years ago, an Army private named Ozzie Fletcher fought in the bloody Battle of Normandy. A crane operator, he barely escaped with his life when a German missile came screaming down, killing his driver. But since Fletcher was Black, he wasn’t awarded the Purple Heart — until now.

The chief of staff of the U.S. Army, Gen. James McConville awarded Fletcher — now 99 years old — the long-overdue medal at the Fort Hamilton Community Club in Brooklyn on June 18.

“It was an honor and privilege to pin a long overdue Purple Heart on a great Soldier and member of the Greatest Generation, Mr. Ozzie Fletcher,” McConville told the Washington Post. “This week, we were able to pay tribute to Ozzie for the sacrifices he made in service to our great Nation during World War II.”

A lifelong New Yorker, Fletcher was drafted into World War II in 1942. Immediately, the 22-year-old saw that white and Black soldiers would be treated differently.

When he boarded the ship to go to Europe as a part of the 254th Port Battalion, Fletcher and the other Black soldiers were segregated from the rest. That meant that they couldn’t wave goodbye to their families.

“We didn’t stay on the deck when we departed, waving handkerchiefs,” Fletcher said in 2019. ″We were on the bottom.” 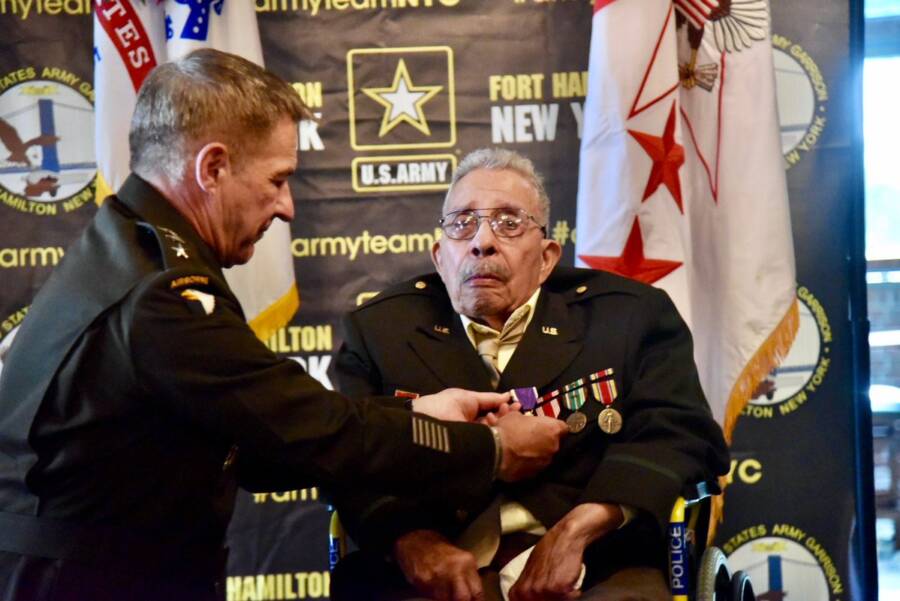 And once he got to Europe, Fletcher faced further discrimination.

“It was everyday discrimination,” his daughter, Jacqueline Streets, noted. “It was the other American soldiers that gave them [Black soldiers] the hardest time.”

But Fletcher was still determined to serve his country. On D-Day, he joined thousands of other Americans in their heroic charge toward France.

“Something, a missile, hit [our] tractor. That was an awful day.” 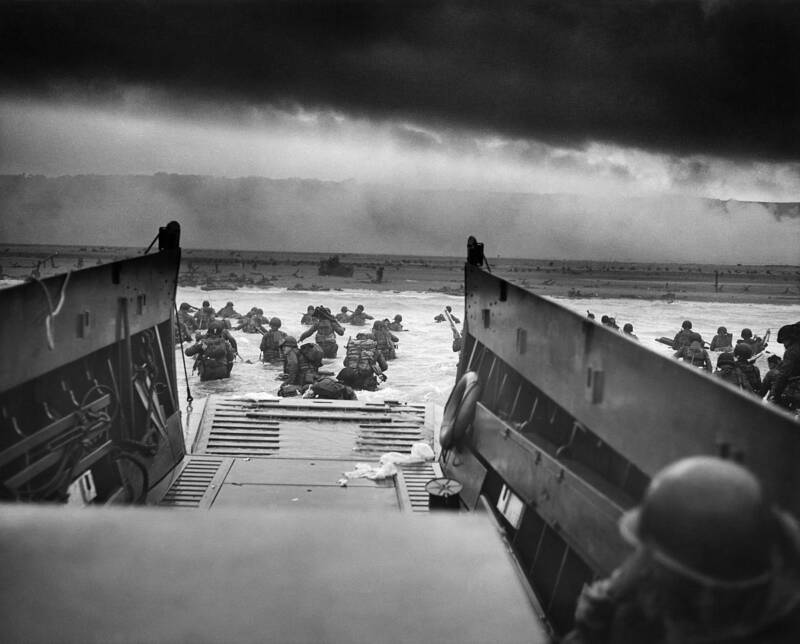 His driver dead, Fletcher stumbled forward through the water. The missile left a gash on his leg, and a permanent scar on his head.

“The Germans were no chumps,” he later recalled. But Fletcher — unlike thousands of others — survived the bloody battle.

He made it home to Brooklyn in 1946, where he married and had a family. He served as a sergeant with the New York Police Department for 26 years and founded the Guardians Association, an organization for Black law enforcement professionals. He then went on to teach high school for another 24 years until his retirement in the 1990s.

But Fletcher’s service — and his injuries — went unacknowledged by the U.S. Army.

Like many veterans, Fletcher didn’t talk much about what he’d seen during the war. But as his friends began to die of old age, he started to open up to his daughter. 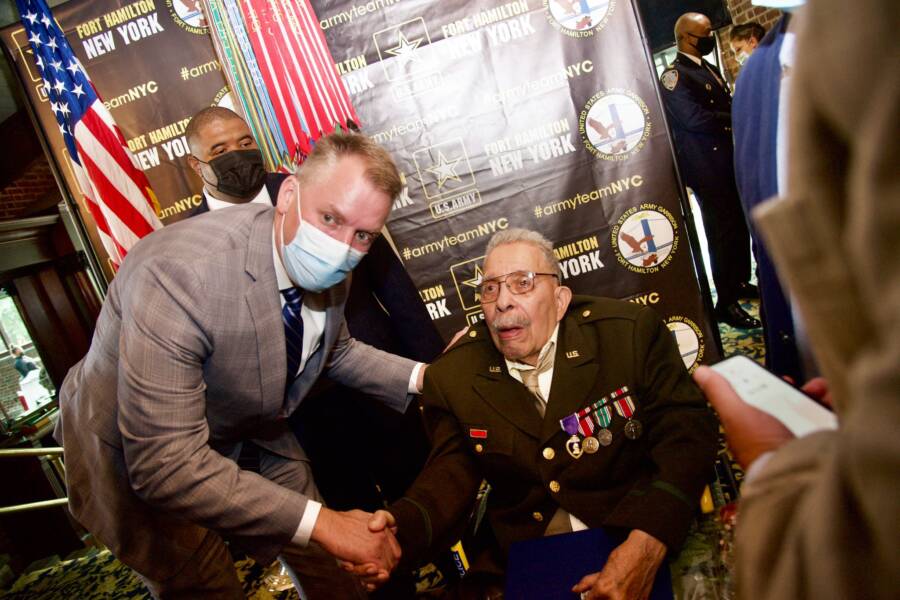 “You want people to know what you lived through,” Streets said. “You don’t want to just disappear and no one ever really knows what happened.”

When Fletcher asked for her help getting replacement medals, Streets began to wonder why her father had never received a Purple Heart. After all, he’d been wounded in action.

She reached out to the chairman of the Joint Chiefs of Staff. Then Lt. Col. Scott Johnson, the Army Human Resources Command’s chief of awards and decorations, began to compile a report for the acting secretary of the Army.

“A lot of times, [soldiers] never received the documents required,” Johnson explained. “Most times, they did not even make the documents. That is the most challenging part for us.”

Although a fire had destroyed Fletcher’s military records in 1973, his memory remained sharp. As Johnson investigated Fletcher’s story — and that of another Black veteran named Johnnie Jones — he found that everything lined up. 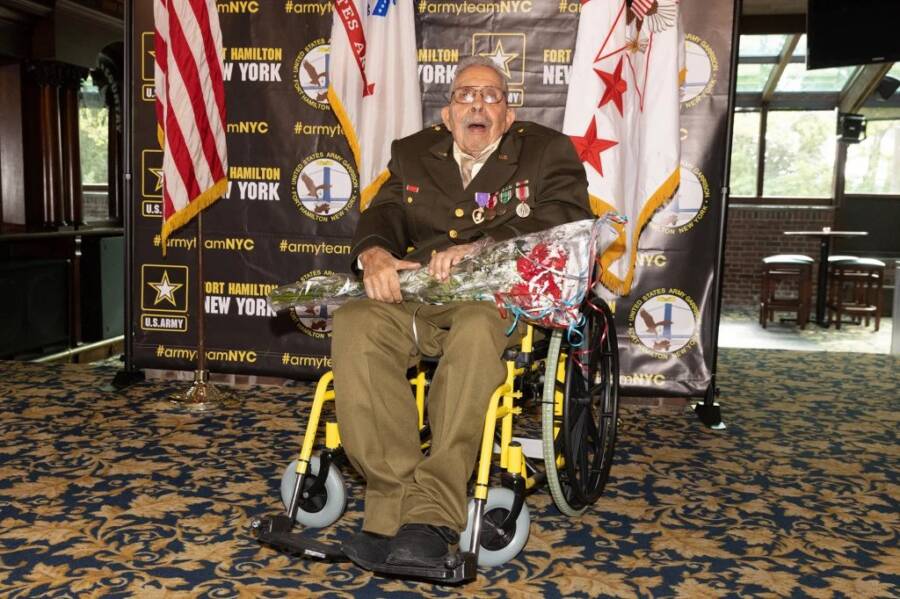 Jonathan Ware/TwitterOzzie Fletcher was awarded the Purple Heart decades after he was wounded in World War II.

“I could pull from their testimonies and multiple other sources and historical data,” Johnson said. “It was exactly like they laid out. Where they were, what they were doing, what types of munitions were being used against them, what types of weapons [were used].

“These men have the scars and stories that are hard to ignore.”

The Army agreed. Ozzie Fletcher deserved a Purple Heart. At the June 18 ceremony, McConville finally pinned one to Fletcher’s chest.

“He has spent his entire life giving to those around him whether they were brothers in arms, families, or his community. Well, today it’s Ozzie’s turn to receive,” McConville said.

As for Fletcher himself? He said that receiving the medal left him “exhilarated.”

Wearing his military uniform, surrounded by friends and family, and serenaded by the Star-Spangled Banner, Fletcher said, “It’s about time.”

After learning about Ozzie Fletcher’s story, read about the all-Black World War I unit called the Harlem Hellfighters. Or, look through the stunning photos of the D-Day Normandy invasion Operation Overlord.