The True Story Of The Panjandrum, A Disastrous Experimental Weapon Of World War II

The Panjandrum was supposed to change the course of the war for the British and help the Allies on D-Day. Instead, it almost took out a dog. 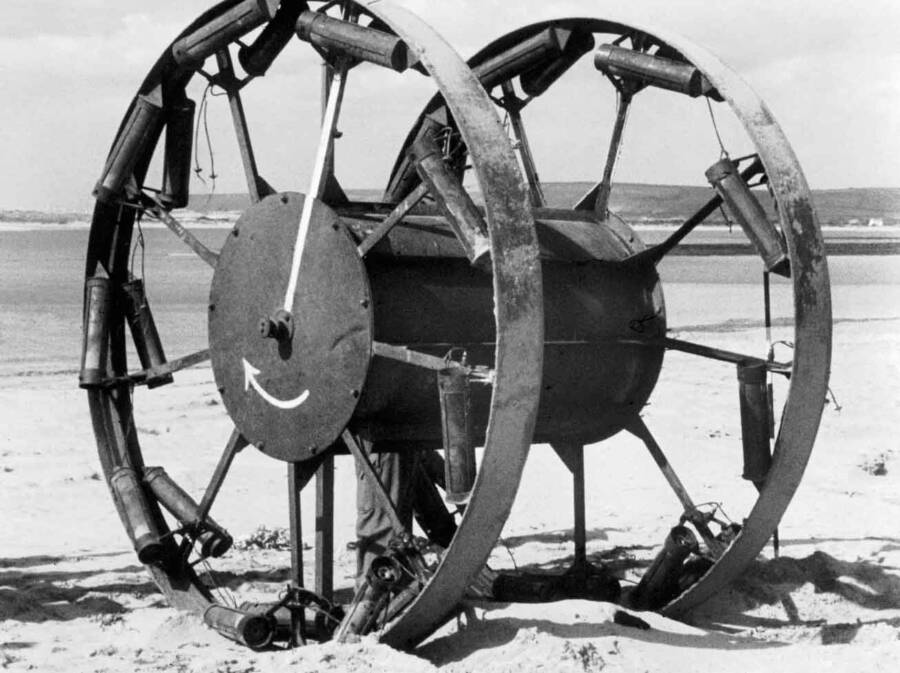 Imperial War MuseumsThe Panjandrum, a massive wheel lined with rockets, was supposed to blast through the German defenses.

During World War II, the Allies experimented with new weapons. But one invention never made it past the prototype stage. The Panjandrum, a spinning wheel propelled by rockets, was simply too dangerous.

The Panjandrum was designed to reach speeds of 60 miles per hour and to smash through 10-foot walls of concrete. Shaped like a massive wagon wheel, the weapon was equipped with about 70 rockets and packed with explosives. But ultimately, that made the Panjandrum too dangerous to deploy in war.

“Generals fled for cover,” wrote James Moore and Paul Nero of the Panjandrum in their book Pigeon Guided Missiles: And 49 Other Ideas that Never Took Off. “The official cameraman was almost mown down. And the Panjandrum, rockets flailing, wheels ablaze, disintegrated.”

After that final failed test, the experimental project ended.

The war against Germany had reached a stalemate by 1943. In spite of intense bombing raids, the Germans had failed to conquer Britain. At the same time, the Allies were struggling to gain a foothold in Europe.

Fearing an invasion across the English Channel, the Germans had erected heavy fortifications along the European coastline. Known as the Atlantic Wall, the barrier stretched all the way from Norway to Spain.

Thick concrete bunkers lined the beach, according to History on the Net. Barbed wire, hidden mines, and massive artillery guns reinforced the defenses. 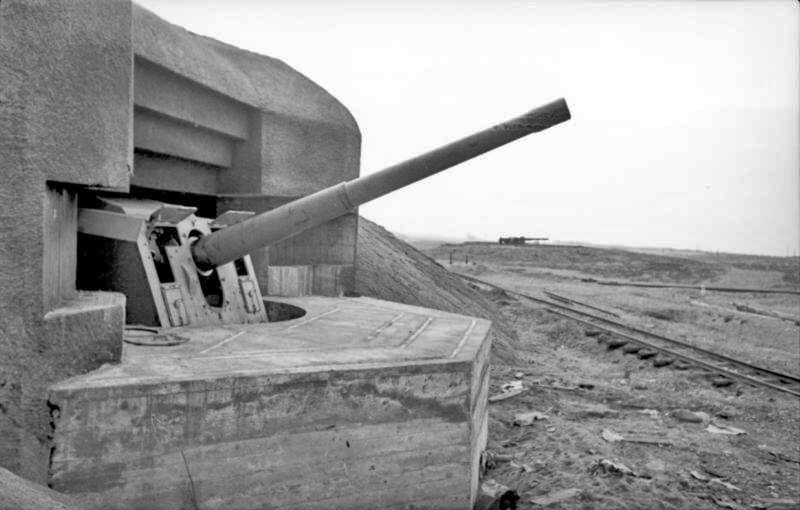 German Federal ArchivesThe fortifications of the Atlantic Wall made invasion a risky proposition.

Towering walls of concrete made an invasion seem impossible. Until the Brits came up with a weapon capable of blasting through the Atlantic Wall.

Within the British Navy, the Directorate of Miscellaneous Weapons Development (DMWD) was in charge of creating new war machines. And the DMWD rose to the challenge: They came up with the Panjandrum.

What was the Panjandrum? Essentially, the Brits built two wheels, each 10 feet tall, and joined them with a hollow tube stuffed with explosives.

Rockets attached to the wheels would propel the war machine toward German fortifications.

In theory, the Panjandrum was amphibious. The Brits planned to approach the beach in a landing craft and launch the war machine into the water. Then the Panjandrum would roll to shore and smash into the Atlantic Wall, blasting a hole into the concrete.

Once the Panjandrum penetrated the German defenses, Allied tanks would roll through the holes.

Why design a rocket-powered wheel? According to War History Online, the DMWD hoped that the Panjandrum would save lives. Landing troops on a heavily fortified beach could quickly become a slaughter. But by rolling a dozen Panjandrums through the German line, the Allies hoped they could avoid bloodshed.

There was only one problem: The Panjandrum was nearly impossible to operate.

Testing Out The War Machine

Powering the Panjandrum was a problem. To shoot the machine down the beach, the DMWD strapped rockets to the wheels. But the rockets didn’t always work, and some of them blasted off the wheel.

The British learned about the prototype’s issues the hard way. In 1943, they tested the Panjandrum on a Devon beach.

At first, the test went smoothly. The Panjandrum made it from the landing craft to the beach, propelled by rockets. Until some of the rockets failed. The spinning wheel shot off course. 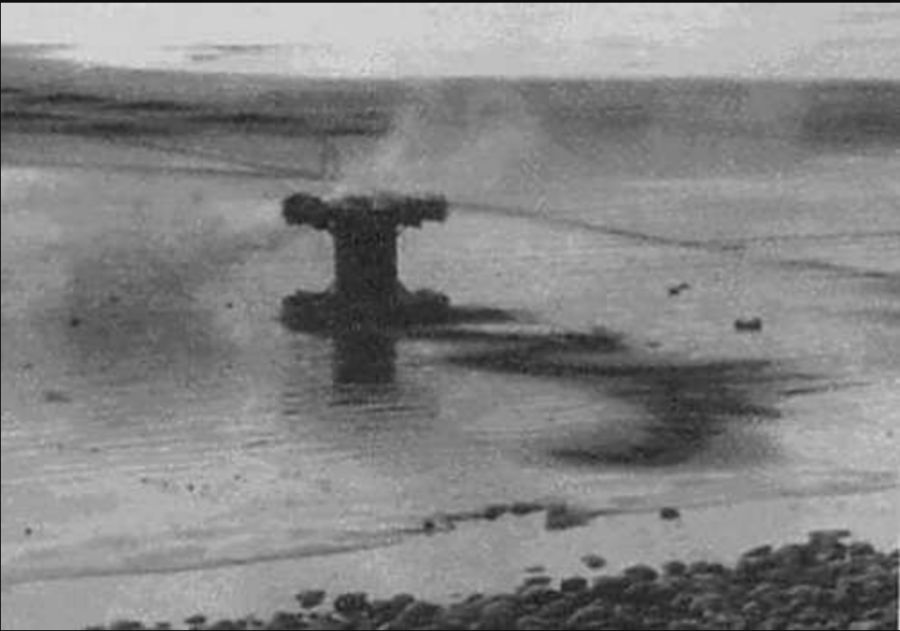 Louis Klemantaski/British GovernmentAfter spinning down the beach, the Panjandrum finally came to rest on its side.

Undeterred, the DMWD modified the prototype. They added another wheel and more rockets. Finally, to keep the machine on course, they reinforced the wheels with steel cables.

Except sometimes the cables snapped, creating even more havoc.

Fortunately, the Brits decided not to pack the center of the drum with explosives for the tests. Instead, according to WIRED, they opted for a much safer choice: sand.

The Final Test of the Panjandrum

In spite of the disastrous tests, the Brits kept working on the Panjandrum. By January 1944, the DMWD invited the top brass, including scientists, naval officers, and photographers, to witness the war machine in action.

The test started out smoothly. With rockets firing, the Panjandrum rolled across the water and onto the beach. But then the test took a turn. 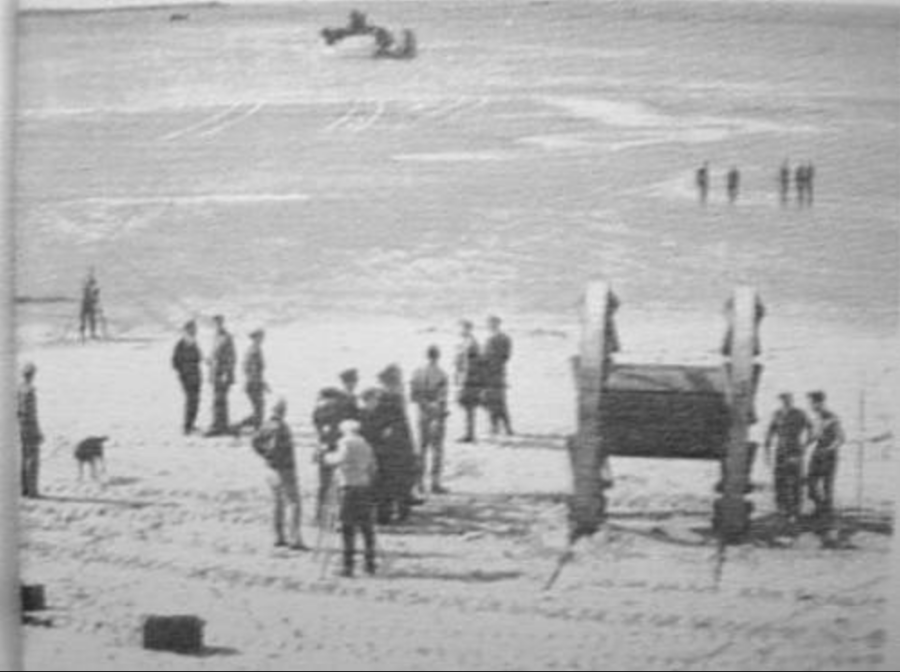 Louis Klemantaski/British GovernmentBritish admirals and generals gathered to watch the final trial of the Panjandrum.

According to History Collection, a BBC documentary described what happened next.

“At first all went well,” the documentary reported. “Panjandrum rolled into the sea and began to head for the shore.

The rocket-fired wheel spun toward Lt. Louis Klemantaski, a Royal Navy photographer. Gazing through a telescopic lens, Klemantaski thought the weapon was further away – so he kept filming.

But the roar of the Panjandrum forced Klemantaski to look up. When he did, he saw a 10-foot wheel flying toward him, rockets shooting off in every direction.

Klemantaski ran for his life. The admirals and generals who had gathered to watch the test dove for cover.

“Panjandrum was now heading back to the sea but crashed on the sand where it disintegrated in violent explosions, rockets tearing across the beach at great speed.”

An officer’s dog took off after a loose rocket. The admirals agreed that the Panjandrum was a failure.

D-Day Without The Panjandrum

Months after the Brits scrapped the Panjandrum, they successfully breached the Atlantic Wall and invaded Normandy.

On D-Day – June 6, 1944 – over 160,000 Allied troops stormed the beaches of Normandy. “We will accept nothing less than full victory,” declared General Dwight D. Eisenhower in an issued order.

As feared, the daring invasion came at a high price. The Allies suffered over 9,000 casualties. Yet D-Day ultimately succeeded. One of the largest invasions in history worked – but without the Panjandrum.

What would D-Day have looked like with dozens of flaming wheels exploding across the beaches of Normandy? The casualties might have been even higher. Scrapping the experimental weapon was the right call.

The Brits weren’t the only ones dreaming up insane new weapons. Next, read about the outlandish Nazi weapons developed during the war, and then experience the carnage and heroism of D-Day in pictures.