Since the coronavirus pandemic brought tourism to a halt, Thailand's monkeys have been starving and aggressive. 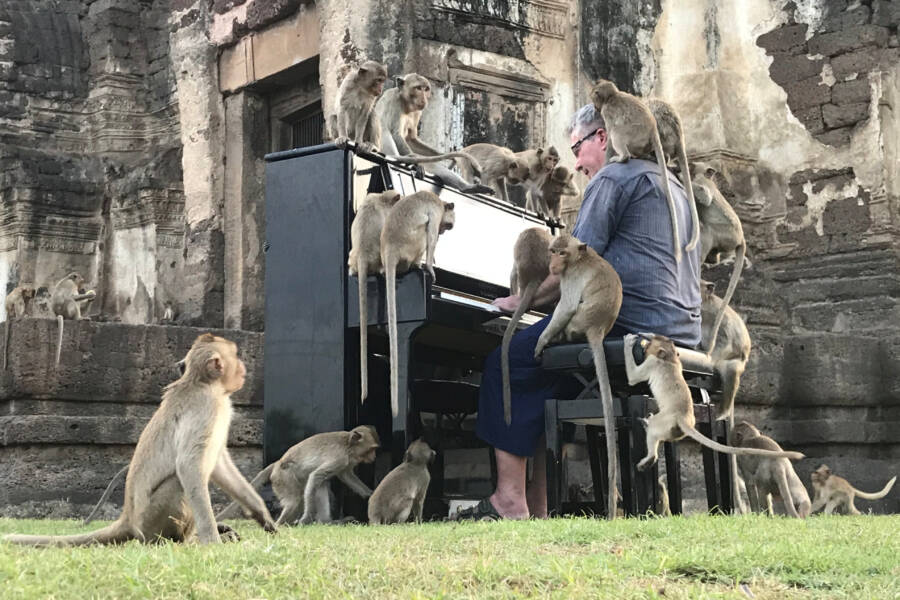 TwitterBefore transitioning to an audience of monkeys, Barton played the piano for Thailand’s elephants for more than 10 years.

It’s unusual for pianists to receive the primal response that Paul Barton gets. On tour in central Thailand, the British musician has seen his fans destroy his stool, climb atop the instrument, and even scale his shoulders as he performs. Fortunately for human decency, his unruly fans are macaque monkeys.

According to Reuters, Barton’s unconventional audience has been in dire straits as a result of the coronavirus pandemic. With tourism at a standstill, there are fewer visitors to feed an increasing number of monkey mouths. As such, Barton has taken it upon himself to draw attention to the primates’ plight.

An estimated 8,400 macaques live in the city of Lopburi alone, with most of them occupying just a few city blocks near the city’s 13th-century Hindu temple. And the lack of tourists has made these monkeys increasingly aggressive, troubling local business owners.

In July, one shopkeeper told The New York Times, “It has never been this bad. We’re not against the monkeys, but it’s difficult when people are afraid of being bitten when they come to our store.”

A Worldwide News interview with Paul Barton at an ancient Hindu temple in Lopburi, Thailand.

To lend a hand, Paul Barton has already performed at four venues in the Lopburi province, which is known for its exorbitant population of marauding monkeys. From ancient Hindu temples and a hardware store to an abandoned cinema, Barton hopes to raise awareness about the hungry monkeys while studying their response.

“I was surprised to play the piano and find they were actually eating the music as I was playing it, eating and pulling the stools to pieces,” he said. “But you know this is an incredible opportunity and I wasn’t going to let those things distract from the project which is to play music for these wonderful macaques.”

This isn’t the first time Barton has prioritized the welfare of animals over the applause of high society. According to the Feurich piano company, the Yorkshire-born musician learned rather quickly that his talents could help combat environmental issues — instead of scoring endless evenings for the bourgeoisie.

A graduate of the Royal Academy of Arts in London, Barton was well on his way to becoming an established concert pianist when the epiphany struck. It all began with a trip to Thailand. He soon made Bangkok his home, met his wife, and decided to teach local youths how to play.

It was around this time that he began playing for blind animals as well. Barton found it highly rewarding to play Bach, Beethoven, Schubert, and Chopin for the four-legged residents of Elephant’s World, a sanctuary for Thailand’s national animal. The 59-year-old now hopes to use his talents to help Thailand’s monkeys. 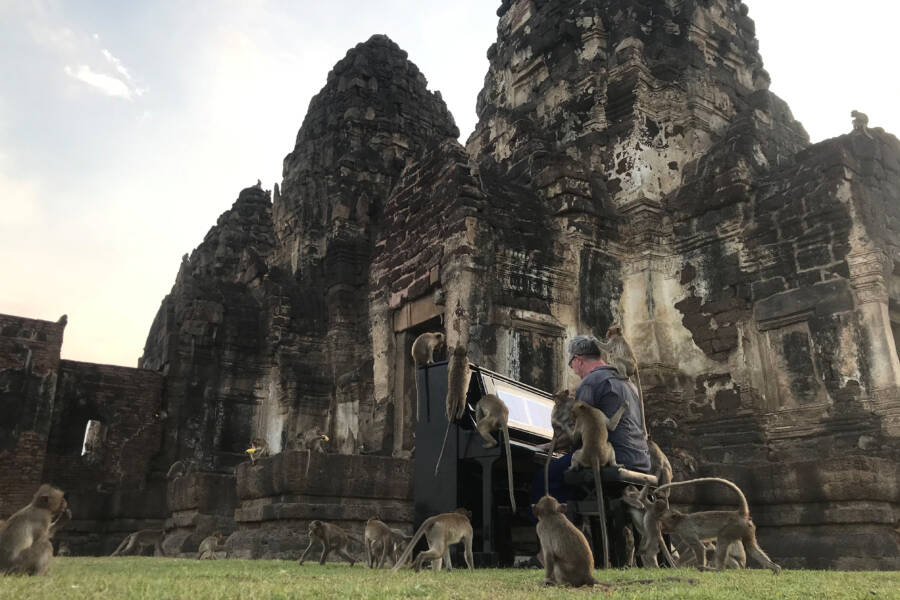 TwitterBarton believes this musical interaction both helps the animals reduce stress and raises awareness of their plight.

The classically trained maestro has since serenaded his furry friends with timeless compositions like the English folk song “Greensleeves” and Beethoven’s “Für Elise.” While he has found his crowd of creatures rather unfocused, he thinks these musical interactions help them relax — and spur onlookers to donate.

“It’s possible that the music can play a part of the rehabilitation process,” said Barton.

With more than 10 years of playing the piano for Elephants under his belt, Barton has found it just as rewarding to study how animals respond to classical music while also watching an influx of donations roll in. Naturally, their behavioral response is often just sheer chaos — which Barton finds just as well.

Paul Barton playing the piano for macaques monkeys in an abandoned cinema in Lopburi, Thailand.

“A wonderful opportunity to see the wild animals just being themselves,” he said.

While it remains unclear just how much tangible profit these performances have yielded, the generous endeavor is undeniably selfless. Barton could easily spend his every waking hour by using his pedigree in classical training to increase his own income.

Instead, Barton listened to his conscience — and forged ahead to help others, no matter how furry or incapable of speech they might be. In the end, he’ll just have to find a way to tell his fans not to eat his sheet music before he’s done with his tune.

After learning about the British pianist playing for Thailand’s hungry monkeys, read about how baby elephants in Southeast Asia are separated from their mothers and tortured for the sake of tourism. Then, learn about Chinese scientists engineering smarter monkeys by giving them genes from the human brain.