Paul Is Dead: The Truth Behind The Bizarre Conspiracy Theory Of Paul McCartney’s Supposed Death

For decades, countless people have claimed that the "real" Paul McCartney died in a car accident in 1966 and was replaced with a lookalike.

Slide The Beatles’ White Album out of its case. Turn on your record player. Put on the second-to-last track, “Revolution 9,” and play it backward. You should hear an otherworldly voice moaning, “Turn me on, dead man.” In 1969, this was enough to convince Beatles fans: Paul is dead.

That year, the bizarre rumor rapidly gained steam. According to the “Paul Is Dead” theory, Paul McCartney had died in a car crash in 1966. The other Beatles — John Lennon, George Harrison, and Ringo Starr — decided that the show must go on. So they hired a body double. 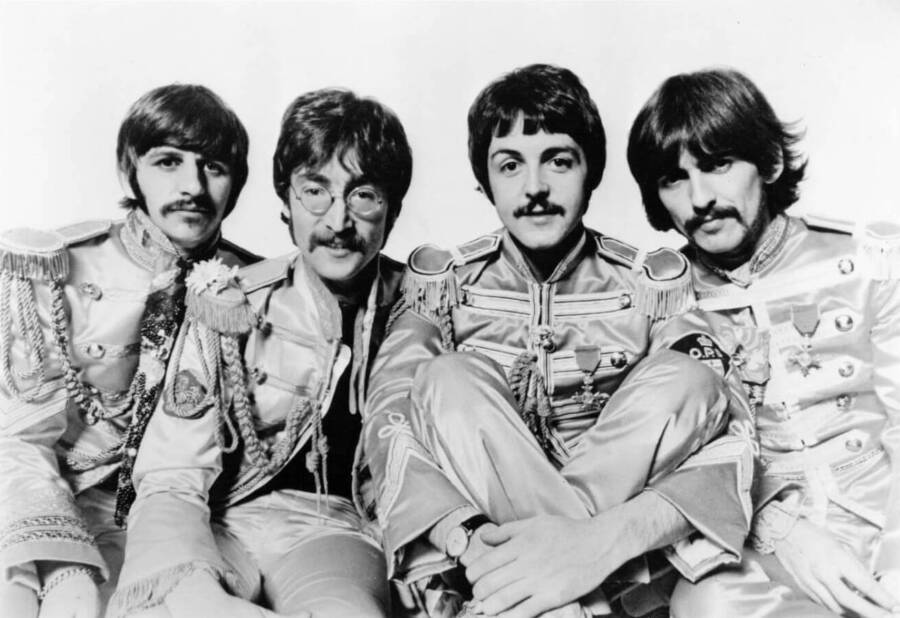 ParlophoneAccording to the “Paul Is Dead” theory, Paul McCartney had died by the time this promotional photo was taken in 1967.

Believers in the theory suspect, however, that guilt eventually weighed heavily on the remaining Beatles. And they started leaving clues in their music — like the hidden “turn me on, dead man” in the White Album.

So, where did this rumor even come from? And what pieces of evidence exist to support it?

Two Car Crashes And The Beginning Of A Conspiracy 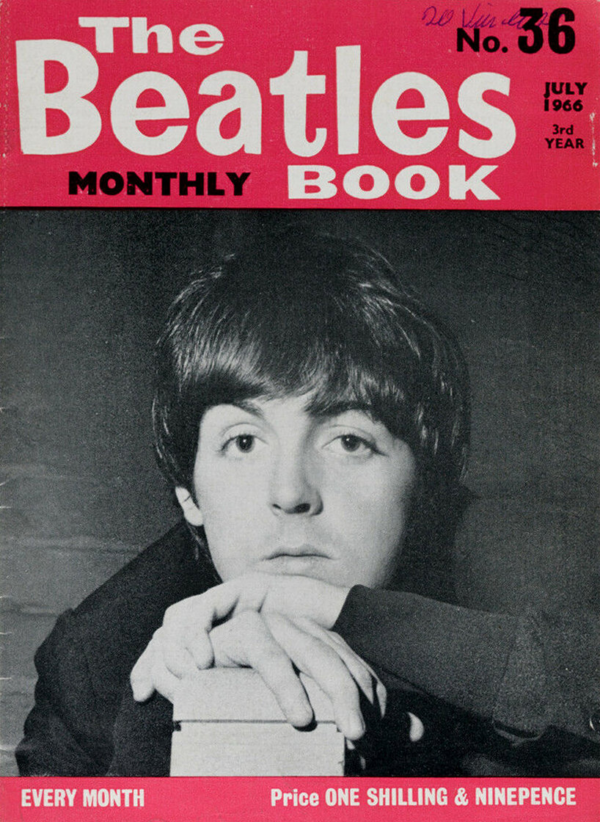 Bradford Timeline/FlickrPaul McCartney in 1966, the year he allegedly died.

In February 1967, a strange aside appeared in the Beatles Monthly Book, the band’s official fan magazine.

“Stories about The Beatles are always flying around,” the magazine briskly noted. “A rumor swept London that Paul McCartney had been killed in a car crash on the M1. But, of course, there was absolutely no truth in it at all.”

A seed of truth did exist within this rumor, however. McCartney had crashed his moped in December 1965, resulting in a chipped tooth. And in January 1967, someone driving McCartney’s car had crashed it on the M1 motorway.

But in the early days, the rumor flailed because it seemed so easy to refute. McCartney appeared in public, looking very much alive. And The Beatles released Sgt. Pepper’s Lonely Heart’s Club Band in May 1967.

However, a college student in Michigan revived the rumor with aplomb in 1969. On Oct. 12, Tom Zarski called into a radio show on WKNR, hosted by DJ Russ Gibb to discuss the “Paul Is Dead” theory. He suggested that Gibb play the intro from “Revolution 9” from The Beatles’ White Album.

As audiences across the country listened, they heard what appeared to be a man’s voice muttering: “Turn me on, dead man.”

“The whole thing just exploded,” Gibb later recalled. “The phones were ringing off the hook. People were calling with their own clues. It was non-stop.”

The backward track acted as a spark — and ignited the Paul McCartney conspiracy across the globe.

What Is The ‘Paul Is Dead’ Theory? 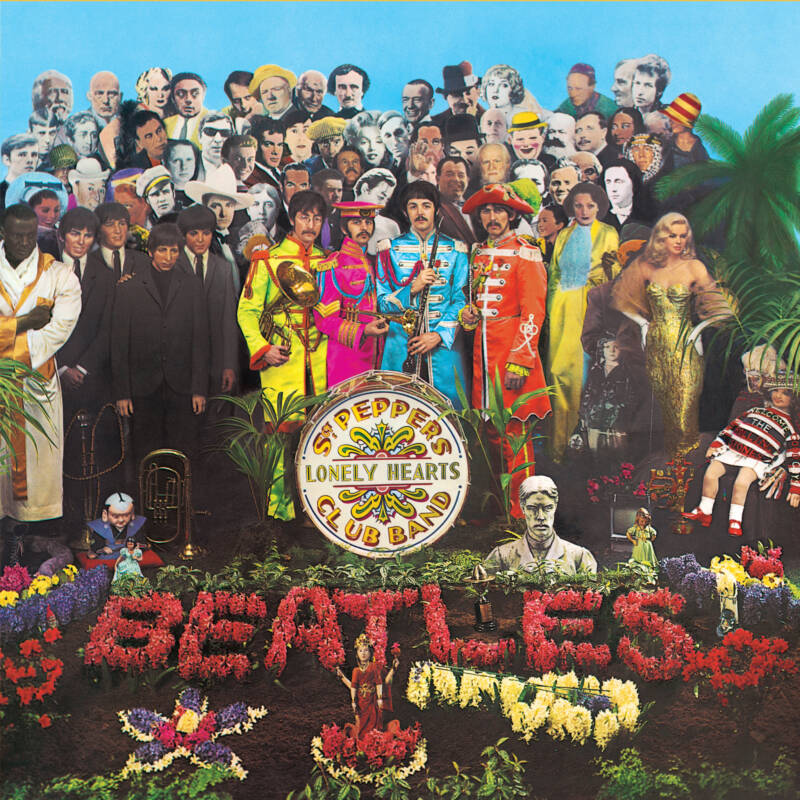 According to the “Paul Is Dead” theory, Paul McCartney stormed out of a recording session on November 9, 1966. Upset with the band, he got into his car and drove off into the night. At some point, McCartney got into a terrible accident that killed — and decapitated — him.

But this put the other members of The Beatles in a bind. By 1966, the band had released their albums Rubber Soul and Revolver to critical acclaim. They had played to 55,000 fans at Shea Stadium. The Beatles were on an upward trajectory, and they couldn’t let something like death stop them.

As the theory goes, Lennon, Harrison, and Ringo decided to keep on playing without McCartney. But they also resolved to hide his death from the public. So, the remaining Beatles hired a Paul McCartney lookalike named William Campbell, also known as Billy Shears. 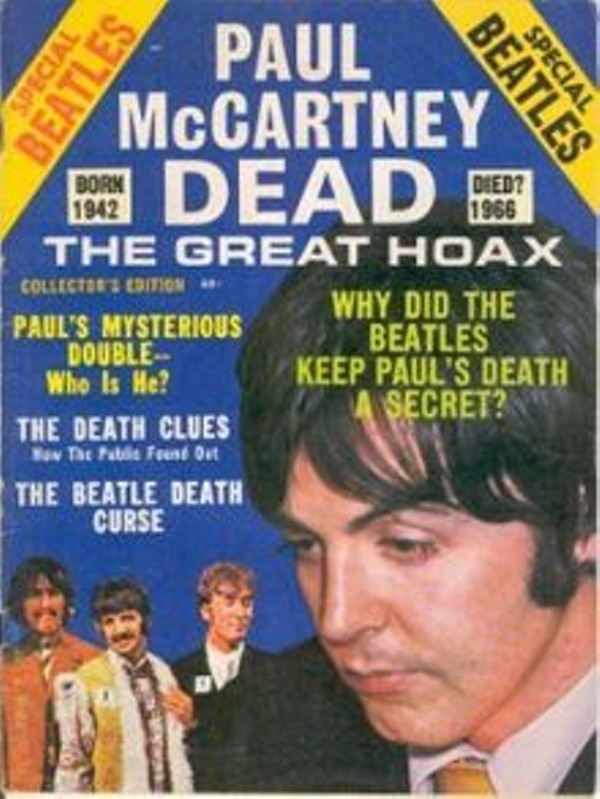 Campbell, luckily, not only bore a striking resemblance to McCartney — he could sing like him and even write good songs.

However, the other Beatles felt guilty about swapping out McCartney and never mourning his death. So, they began to leave subtle clues in their album artwork and songs.

Proponents of the “Paul Is Dead” theory point to a number of these clues as proof that Paul McCartney died in 1966.

Evidence And Clues In Beatles Albums 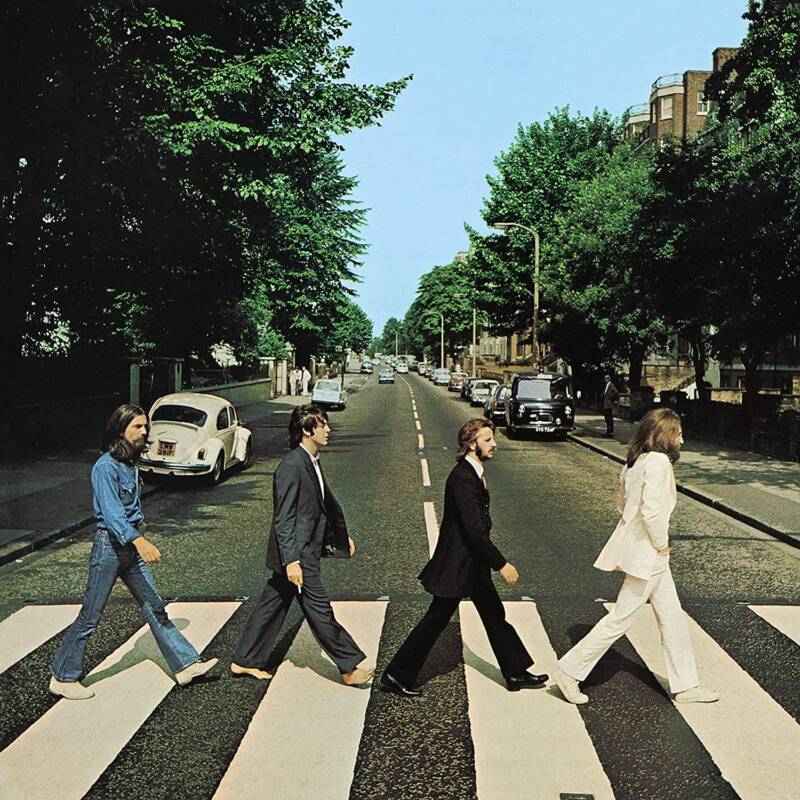 In addition to “Revolution 9” on the White Album, Beatles fans pointed to several other clues about Paul McCartney’s death from the band’s discography.

For example, “Strawberry Fields Forever” contains a backward message that seems to say: “I buried Paul.” And “I’m So Tired” appears to have yet another backward clue which says: “Paul is dead. Miss him, miss him, miss him.”

Plus, fans had plenty of new material to sort through — The Beatles had released Abbey Road just a few weeks before the “Paul Is Dead” theory blew up.

Believers in the theory fixated on the Abbey Road album cover itself. They claimed the imagery evoked a funeral procession.

Lennon, dressed in white, represented the priest. Starr, in black, portrayed an undertaker. While Harrison, wearing full denim, suggested a gravedigger. And McCartney, out of step with the others, not wearing shoes, and eyes closed, was clearly meant to represent his own death.

The list goes on and on. Fans also point to the Volkswagen Beetle behind the band with the “28 IF” license plate — if McCartney was alive, he would be 28.

And they didn’t stop at Abbey Road. The entire concept of Sgt. Pepper’s Lonely Heart’s Club Band — the introduction of an alter ego, Billy Shears — seemed to scream conspiracy theory.

On that album cover, believers note, the cut-out figures represent mourners at a funeral. McCartney holds a black instrument while the others hold brass, signifying his death. And could the yellow hyacinths in the shape of a left-handed bass guitar, McCartney’s instrument, really be a nod to how the other Beatles buried him?

In search of more clues, fans listened to tracks backward. They held up album covers to the mirror. Signs seemed to be everywhere. But to The Beatles press team, it was no joke.

“Someone from the office rang me up and said, ‘Look, Paul, you’re dead,” McCartney remembered. “And I said, ‘Oh, I don’t agree with that.'”

But the theory had been unleashed. And it would prove impossible to suppress.

How The ‘Paul Is Dead’ Theory Lives On 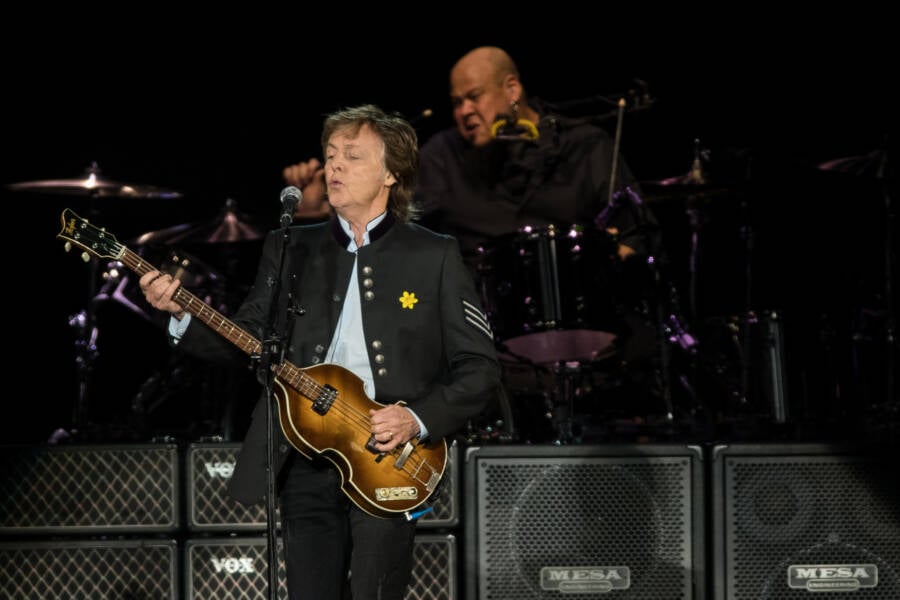 Marc Grimwade/WireImage/Getty ImagesPaul McCartney performs at the age of 75 in Brisbane, Australia, Dec. 9, 2017.

On the one hand, the “Paul Is Dead” rumors gave the band a publicity boost. They didn’t need it, but The Beatles nevertheless saw two albums, Sgt. Pepper’s Lonely Hearts Club Band and Magical Mystery Tour, re-enter the Billboard chart after being off it for nine months.

But it also came as an annoyance. By 1969, The Beatles were falling apart and starting to strike out on their own. John Lennon released his album Cold Turkey on Oct. 20, and McCartney was preparing to release his self-titled debut in April. They wanted publicity for their solo work — not a renewed fixation on their old albums.

“It’s the most stupid rumor I’ve ever heard,” John Lennon said, calling into the same radio station where the Paul McCartney conspiracy first blew up. He denied hiding messages in Beatles songs and denied any symbolism on the band’s album covers.

He later changed his tune slightly — but only because his relationship with McCartney had soured. In his 1971 album Imagine, Lennon skewers McCartney with a song called “How Do You Sleep.”

Lennon sings: “Those freaks was right when they said you was dead/The one mistake you made was in your head.”

But before their relationship took a severe turn for the worst, McCartney echoed Lennon’s remark about the “Paul Is Dead” conspiracy.

“It’s all so bloody stupid,” he said in an interview with Life magazine on Nov. 7, 1969. “I was walking barefoot because it was a hot day. The Volkswagen just happened to be parked there.” 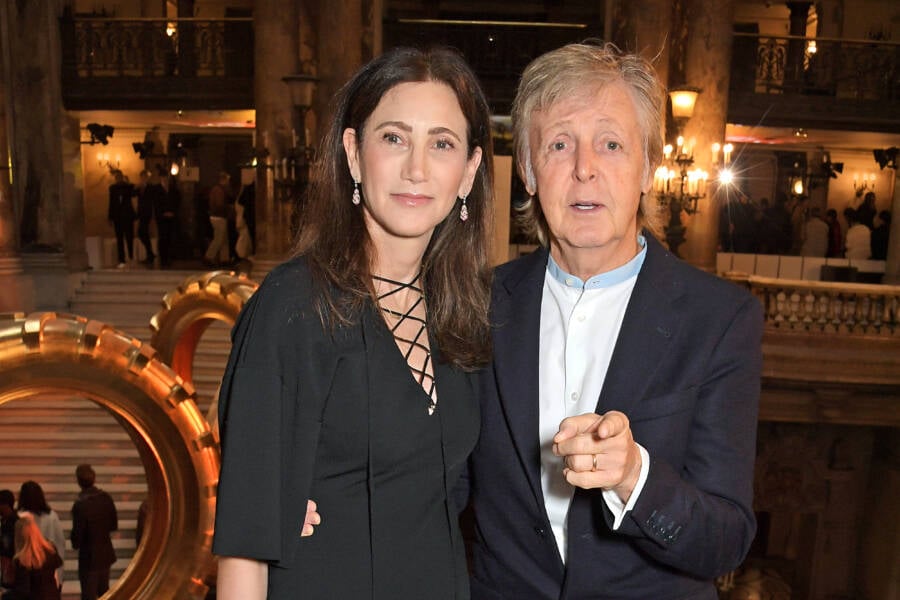 Despite The Beatles’ denials, the rumor has endured. In 2009, the Italian version of Wired magazine even printed an article about the Paul McCartney conspiracy theory.

Their piece featured a study by two forensic scientists who used computer technology to compared the measurements of McCartney’s skull before and after the “car accident.” Ironically, the pair took on the project to prove, using scientific evidence, that “Paul Is Dead” was a lie.

However, they claimed to find that McCartney’s face did, in fact, look different. They pointed to differences in McCartney’s nose, ears, and mouth.

McCartney shrugged it off. That same year he said: “I think the worst thing that happened was that I could see people sort of looking at me more closely: ‘Were his ears always like that?'”

But despite persistent denials — and even though McCartney had released a number of hit albums as a solo artist — death rumors are hard to dispel.

Still, he seems to have taken it all in stride. McCartney even gave a nod to the theory by naming his 1993 album Paul is Live.

That is, if it was in fact Paul McCartney who recorded it…

After learning about the “Paul Is Dead” theory, read why Paul McCarney was a better Beatle than John Lennon, then learn about surprising stories behind your favorite Beatles songs.