One August morning in 1974, astounded Manhattan commuters stopped to watch as Philippe Petit strolled 1,300 feet above them between the Twin Towers.

Philippe Petit gained worldwide recognition for his brazen tightrope walks between the towers of the cathedral on Notre Dame in 1971, between the New York City Twin Towers in 1974, and over Niagara Falls in 1985.

His death-defying stunts and eccentric character were immortalized in the 2015 film, The Walk, which was lauded for its use of 3-D to showcase the precariousness of Petit’s stunts. 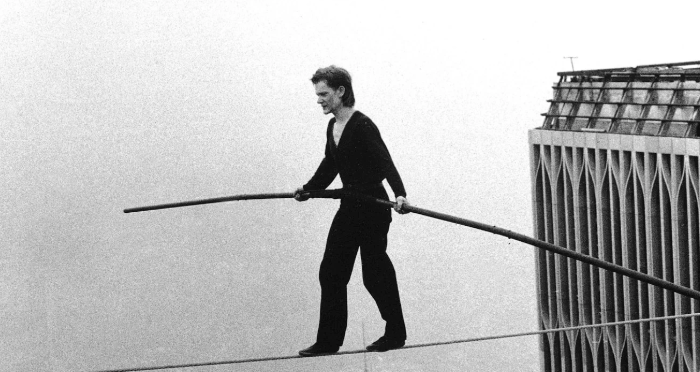 Philippe Petit is a French high-wire artist who gained fame in 1974 for his walk between the Twin Towers in New York City.

While his life is somewhat mundane today, Petit’s past is utterly singular.

French high-wire artist Philippe Petit was born on August 13, 1949 in Seine-et-Marne, just outside of Paris. The second of three children, Petit was a rebellious and creative child who devoted his energies to various outdoor pursuits at the expense of his education. After dabbling in juggling, magic, horseback riding, and even bullfighting — as well as being kicked out of five different schools — Petit discovered the hobby that would become his lifelong passion: tightrope walking.

Although it may seem like a somewhat obscure interest for a young boy, tightrope, or “wire” walking, actually has a long and storied history in France which stretches back to the Middle Ages. As a child, Petit taught himself the ancient art of tightrope walking by simply “stretching several ropes between two trees in a meadow on the family’s country estate and then taking them away one at a time.”

Rudolf Omankowsky, who headed his own famous troupe of tightrope walkers in France, later instructed Petit on how to properly set up and secure the cables. But otherwise, Petit was entirely self-taught. He says: “It is not difficult to walk on a tightrope, but you need to have passion, and you have to work madly, to practice all day long.”

Omankowsky would ask Petit to join his troupe but Petit declined.

Within a year, Philippe Petit could perform all of the most impressive stunts on a tightrope spanning from somersaults to riding a unicycle.

As impressive a skill as it may be, there are not many careers that call for the ability to walk on a tightrope. Petit found his options further limited when he declined the offer to join Omankowsky’s troupe. He also refused to join the circus since both choices would have forced him to give up creative control of his act.

Like countless other performers over the centuries, Petit found himself working the streets of Paris entertaining crowds with the juggling, tightrope, and magic tricks he had learned as a child. Despite the hundreds of arrests for performing without a permit, Petit was able to make a fairly comfortable living as a street performer. It wasn’t until 1971, though, that he would make a name for himself on the world stage.

The famous towers of Notre Dame cathedral were easily visible from where Petit was living and, as he explained in an interview with The New Yorker: “One day, I decide[d] that I am going to put a wire there, and surprise Paris, surprise the world.”

Three years of careful preparation and planning later, the surprise was complete. On the morning of June 26, 1971, Petit calmly strode across the cable he had secretly strung between the medieval cathedral’s two towers with the help of two assistants. Captivated crowds watched from below as he walked, laid down, and juggled, all the while suspended in the air above one of Paris’ most iconic landmarks.

Although the crowds on the ground may have been enthused, the French authorities were not. Petit was arrested, yet again, upon his descent. He was quickly released and the French media soon forgot his stunt.

“I am not a death-wish person. I want to live very old. It is true that death is part of the frame…My world is a dangerous world, sure, but I am very safe in knowing my limits. I am not playing with words when I say I don’t take risks. The danger becomes so narrow that it is a novel companion with whom you travel. It is not an enemy.”

The Infamous Walk Between The Twin Towers

Petit got the inspiration for what was to become his most famous performance in a somewhat unlikely place — the waiting room of his dentist’s office.

As he recalls in Man on Wire, the documentary that recounts his escapade in detail, he was just 17 when a toothache brought him to “one of those uncolorful waiting rooms of a French dentist…[A]nd, suddenly, I freeze because I have opened a newspaper at a page and I see something magnificent, something that inspires me.”

Petite had seen an article on the Twin Towers in New York City, which had yet to be constructed, but would be the tallest buildings in the world once they were. For Petit, the seeds of a new dream had been planted.

Philippe Petit looks back on his walk across New York’s Twin Towers.

By the time he was ready to finally attempt his most dramatic performance in 1974, Petit already had not only a walk between the towers of Notre Dame but also the Sydney Harbour Bridge under his belt.

The first time Petit saw the Towers that had inspired him in real life, he almost lost hope. “[T]he minute I got out of the subway, climbing the steps, looking at them…” he recalled, “I knew that my dream was destroyed instantly.”

In addition to the usual problems of exceedingly high winds and weather at such a tremendous height, Petit and his accomplices — among whom included an American photographer, two French riggers, and a German juggler — needed to figure out how to smuggle almost a ton of equipment into a building still under construction and rig a 200-foot cable between the towers undetected.

Philippe Petit, however, had fortune on his side.

During one of his many scouting missions for his Twin Towers walk, he met Barry Greenhouse who not only recognized the tightrope walker from Paris but conveniently worked on the 82nd floor of the South Tower. Greenhouse would be their key to access inside the building and with his help, Petite and his team were able to smuggle the equipment inside posing as contractors and store it in Greenhouse’s office. 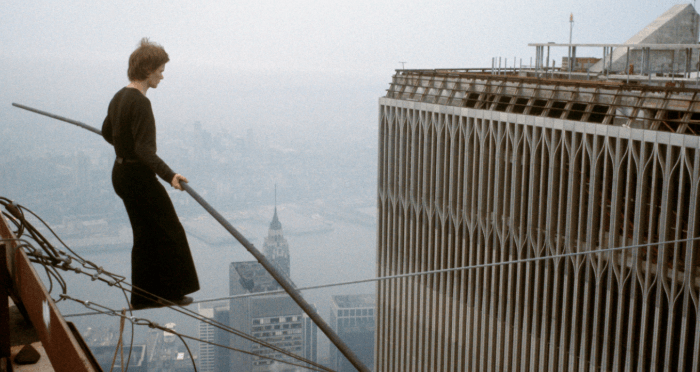 The night of August 6, 1974, Petit and his team began to move the equipment from the 82nd floor to just below the roof on the 110th floor. Using a bow and arrow, the team shot a fishing line between the two towers, then added heavier and heavier ropes until they had an entire high-wire complete with supporting cables. After several close calls with security guards and a brief moment of panic when the team watched a piece of Petite’s costume fall over 1,300 to the ground, they were ready.

Around 7 AM, Petit took his first steps out onto the tightrope. Over the next 45 minutes, he crossed between the towers eight times and even took a breather to lie down on the slim wire as the crowds gathered in the buildings and the streets below in astonishment.

Although Philippe Petit had been cheered on by observing construction workers and police officers, they promptly arrested him as soon as he returned to firm ground. Petit’s luck held yet again as the judge simply sentenced him to perform for children in Central Park.

Petit’s walk between the Twin Towers sealed his place in history. In 2015, the film The Walk was released which starred Joseph Gordon-Levitt as Petit. The film centered around the daring tightrope walk and was widely lauded for its mostly accurate depiction of those events in August 1974. It was also presented in an astounding 3-D format.

Although Philippe Petit would go on to perform several other daring walks, including his 1985 walk over Niagara Falls, his stroll in Lower Manhattan would remain his most famous. He is currently the artist-in-residence at the Cathedral of St. John the Divine in Manhattan and has a home in the Catskills in upstate New York.

When it comes to why Petit performs such brazen acts, his answer is simple and confident: “There is no why,” he said in his documentary.

“To me, it’s, it’s really, it’s so simple, that life should be lived on the edge of life. You have to exercise rebellion, to refuse to tape yourself to rules, to refuse your own success, to refuse to repeat yourself, to see every day, every year, every, every idea as a, as a true challenge, and then you are going to live your life on a tightrope.”

After this look at the death-defying stunts of Philippe Petit and his infamous Twin Tower walk, read about the tragic death of fellow tightrope walker Karl Wallenda. Then, check out these stunning photos of Paris in the 1960s.