With just his mouth, Prince Randian could roll cigarettes, light them, and even shave his face.

He went by many names, including “The Snake Man,” “The Human Torso,” and “The Human Caterpillar.” But no matter what he went by, when the curtain opened and the spotlight fell upon Prince Randian, there was no doubt that the audience was unprepared for what they saw.

Standing under three feet tall, Prince Randian was certainly a shocking sight. His arms were no more than nubs that ended at the shoulders and his legs were almost entirely nonexistent. Dressed in a one-piece red and white striped suit, he resembled a caterpillar more than a man.

And, indeed, his sideshow employer P.T. Barnum took advantage of that. Throughout his sideshow career, his act was to wiggle about the stage and perform tricks using only his mouth.

Prince Randian’s Life Outside The Show

Before being brought to the United States in 1889, Prince Randian lived in the U.S. Virgin Islands. Prior to that, he had lived in Demerara, British Guyana, where he was born.

Not much is known about his early life, including what his birth name was, though a few facts emerged over the years. He was known to suffer from tetra-amelia syndrome, an autosomal congenital disorder that results in babies being born without limbs. According to Barnum, Randian was a Hindu man and thus spoke Hindi. Additionally, though it was never focused on in his performances, he was also fluent in English, French, and German.

Despite his abnormal appearance, Randian lived a surprisingly normal life. Before he began his career, he married his wife, a Hindu woman known as Princess Sarah. Together, the two of them had four children: three daughters, Mary, Elizabeth, and Wilhelmina, and a son, Richard.

When Randian moved to the U.S., his family followed along. At the end of the 19th century, they settled into a quiet neighborhood in Plainfield, New Jersey, where they stayed while Prince Randian was performing.

Performing With P.T. Barnum And Becoming “The Snake Man” 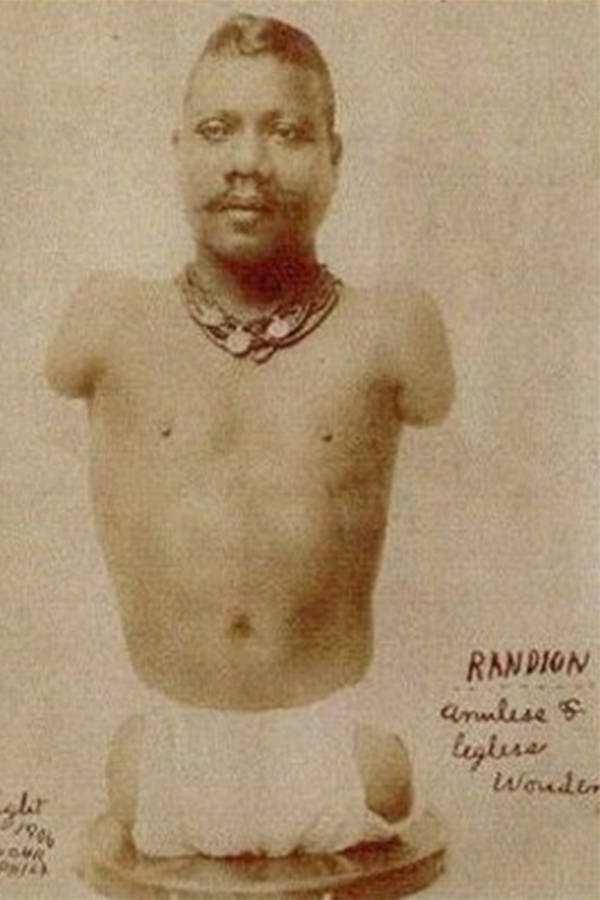 In 1889, whilst traveling abroad, P.T. Barnum came across Prince Randian. Immediately enamored with his disability and impressed with how he’d managed to overcome it, Barnum brought the 18-year-old Randian back to the United States to work in his famed sideshow.

Prince Randian’s act was a simple one. Like most sideshow “freak” performers, he simply had to do the things he normally did while looking like an oddity.

As his condition had plagued him his entire life, Randian had adapted over the years. He’d taught himself to be able to do almost everything that needed to be done to keep himself groomed and healthy.

One of Randian’s first acts was his most famous. Randian was able to roll a cigarette using just his mouth and then light the cigarette with a match. Holding both the match and the cigarette between his teeth, he would strike the match, and then move the cigarette close enough to the flame that it would light. Then he would inhale and blow the match out along with the cigarette smoke.

Though the feat was impressive, it was just one of many things that Randian could do. Over the years he’d taught himself to paint and to write, holding the brush or pen between his teeth and using his lips to maneuver it.

His feat was filmed for the movie Freaks, Randian’s only film appearance:

Prince Randian lights a cigarette in this film from 1932.

Perhaps most impressively, he’d taught himself to shave his face. Using a wooden block, to which the razor was secured, he would shave by moving his face, rather than the razor. As the pictures show, he was clearly quite adept, as his facial hair was kept in good condition.

More impressive yet, he would keep his razor and block, along with paintbrushes and cigarette materials, in a wooden box he said he constructed himself – it even had a lock affixed to the front.

After more than 40 years of performing, Randian died on Dec. 19, 1934 just hours after giving his final performance. Prince Randian succumbed to a heart attack. He was 63 years old.

After learning about the life of Prince Randian, “The Human Caterpillar”, check out some of P.T. Barnum’s other sideshow acts. Then, read about Myrtle Corbin, the four-legged girl from Texas.