The future Queen Elizabeth was barely a teenager when World War II threatened her nation, but she was determined to do what she could for her country — and she soon became the first female member of the royal family to enlist in the British Army. 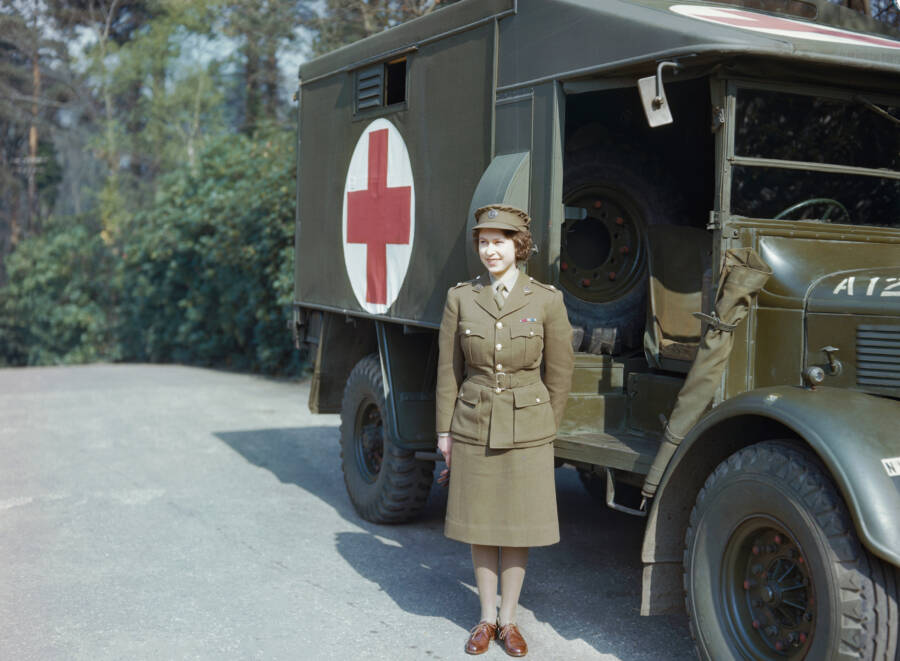 When World War II broke out in 1939, Princess Elizabeth was just 13 years old. Throughout her teenage years, she contributed to the war effort in any way she could — and even enlisted in the British Army by war’s end. From her grueling work with her hands to her fights with her father over her service, there are many surprising stories about the future Queen Elizabeth II during World War II.

Princess Elizabeth was the first woman in the British royal family to join the military. In her role as a mechanic, the future queen took apart engines, changed tires, and learned to drive trucks and ambulances.

The press dubbed her “Princess Auto Mechanic,” and Elizabeth reportedly enjoyed getting her hands dirty and showing her hard work off to her family and friends. After the war, she could often be seen driving her cars around her estates. She was even known to diagnose and repair the engines in her own vehicles at times.

Though she was royalty, there wasn’t always special treatment for Princess Elizabeth during World War II. She was determined to serve her country the same way others were required to. And when the Allies emerged victorious in the end, she slipped out of Buckingham Palace and partied in the streets of London — just like everyone else. This is the story of the soon-to-be Queen Elizabeth’s service in World War II.

Princess Elizabeth In The Early Years Of World War II

From the beginning of the war, the royal family made it clear that they would not leave the country. As the Luftwaffe dropped bombs on London, the British government encouraged Queen Elizabeth the Queen Mother and her daughters, Princess Elizabeth and Princess Margaret, to flee to Canada.

The queen refused. “The children won’t go without me,” she once said, according to Biography. “I won’t leave without the King. And the King will never leave.” 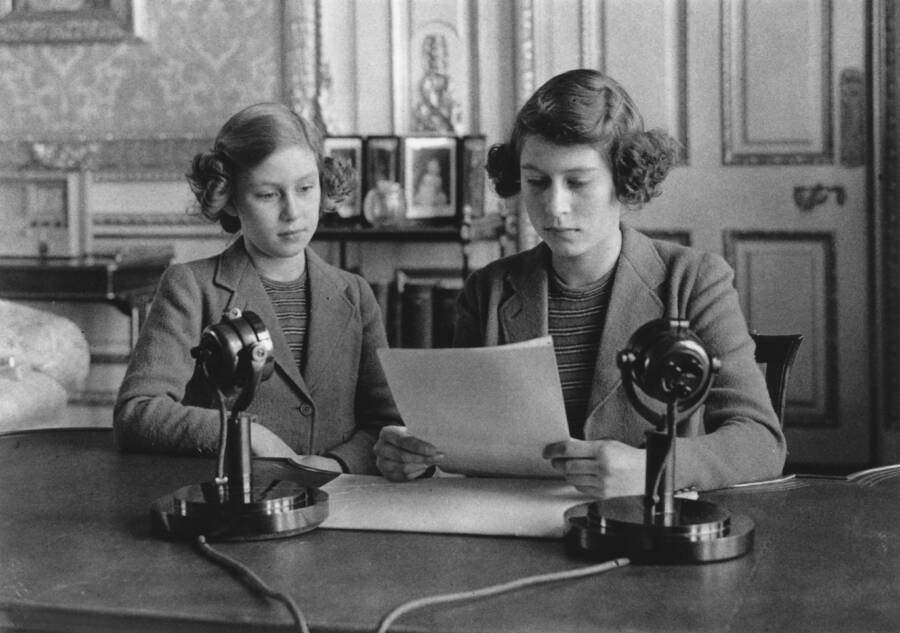 Elizabeth and Margaret spent much of the war at Windsor Castle, 20 miles outside of London. Eager to contribute to the war effort, the future queen made her first BBC radio broadcast in 1940 at age 14. During the broadcast, Elizabeth spoke directly to Britain’s children.

“Thousands of you in this country have had to leave your homes and be separated from your fathers and mothers,” Elizabeth said.

“My sister Margaret Rose and I feel so much for you, as we know from experience what it means to be away from those you love most of all. To you living in new surroundings, we send a message of true sympathy and at the same time we would like to thank the kind people who have welcomed you to their homes in the country.”

During the broadcast, the princess also told her nation, “We are trying to do all we can to help our gallant sailors, soldiers, and airmen, and we are trying, too, to bear our own share of the danger and sadness of war. We know, every one of us, that in the end all will be well.” 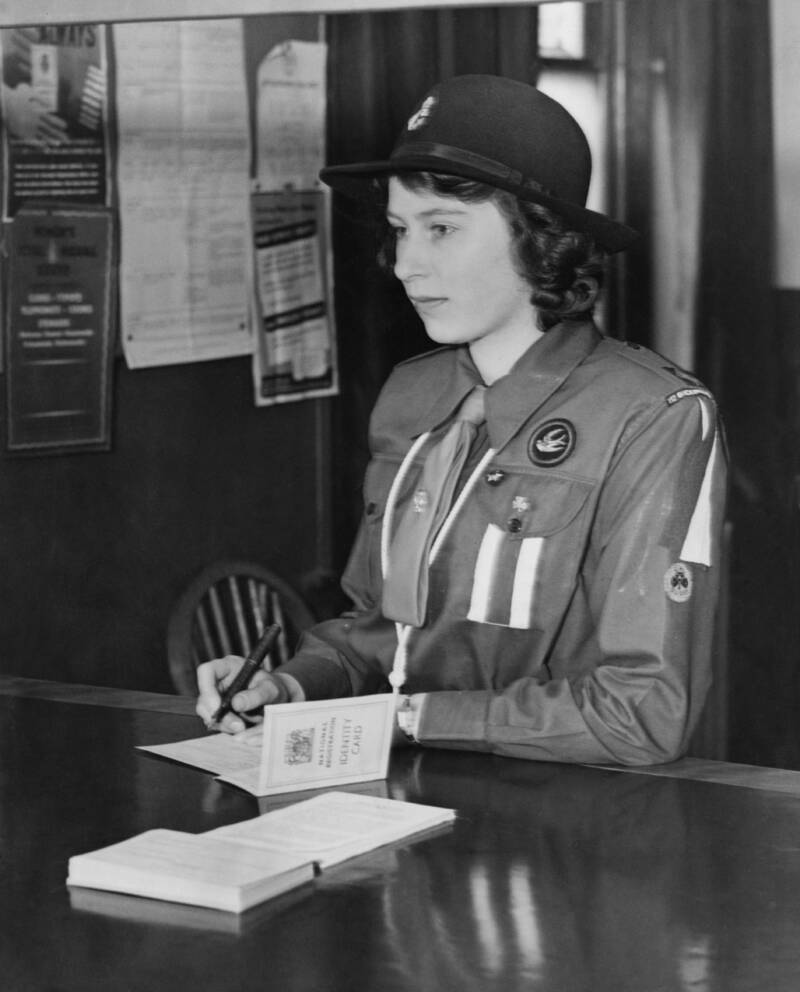 As the war dragged on, Elizabeth wanted to do more. In 1943, she showcased her vegetable garden at Windsor Castle to encourage the British to grow their own produce and fight food shortages. And at 18, Elizabeth informed her parents that she planned to enlist in the British Army.

The Auxiliary Territorial Service, or ATS, was the women’s branch of the British Army. In early 1945, Princess Elizabeth enlisted under the name Elizabeth Windsor.

Before joining the military, Elizabeth spent long months convincing her parents to support her decision. As the king and queen reminded her, no women in the royal family had ever served in the military. But that did not dissuade Elizabeth. She wanted to contribute to the war effort.

In March 1945, Elizabeth traveled to Aldershot to begin her training.

The Army gave the future queen the service number 230873. Under the king’s directive, the princess did not receive a special rank. Elizabeth enlisted as a second subaltern, the equivalent of a second lieutenant.

The new enlistee completed a six-week auto mechanic training course. During her training, Elizabeth learned how to take apart and repair engines. She also learned to drive ambulances, trucks, and jeeps. 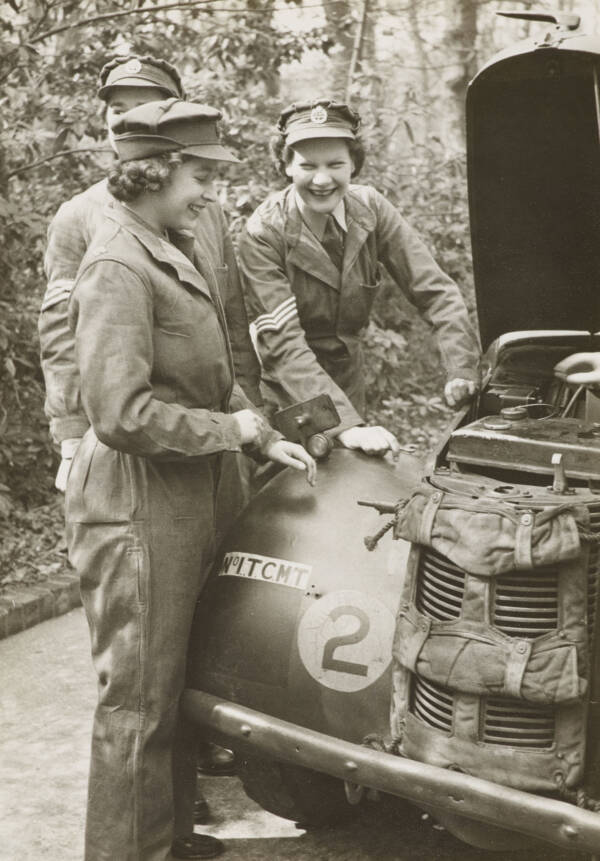 Royal Collection TrustPrincess Elizabeth training as a mechanic with other ATS enlistees.

“One of her major joys was to get dirt under her nails and grease stains in her hands, and display these signs of labor to her friends,” reported Collier’s magazine after the war, according to Insider.

Elizabeth thrived in the ATS. She discovered a sense of camaraderie and freedom while also contributing to the war effort.

The press praised the future Queen Elizabeth II during World War II for her hands-on service — and they often referred to her as “Princess Auto Mechanic.”

What Did Queen Elizabeth II Do During World War II?

Elizabeth completed her training on April 14, 1945. That month, the king and queen visited their daughter’s ATS unit, accompanied by Princess Margaret. Elizabeth later commented, “I never knew there was quite so much advance preparation [for a royal visit],” adding, “I’ll know another time.” 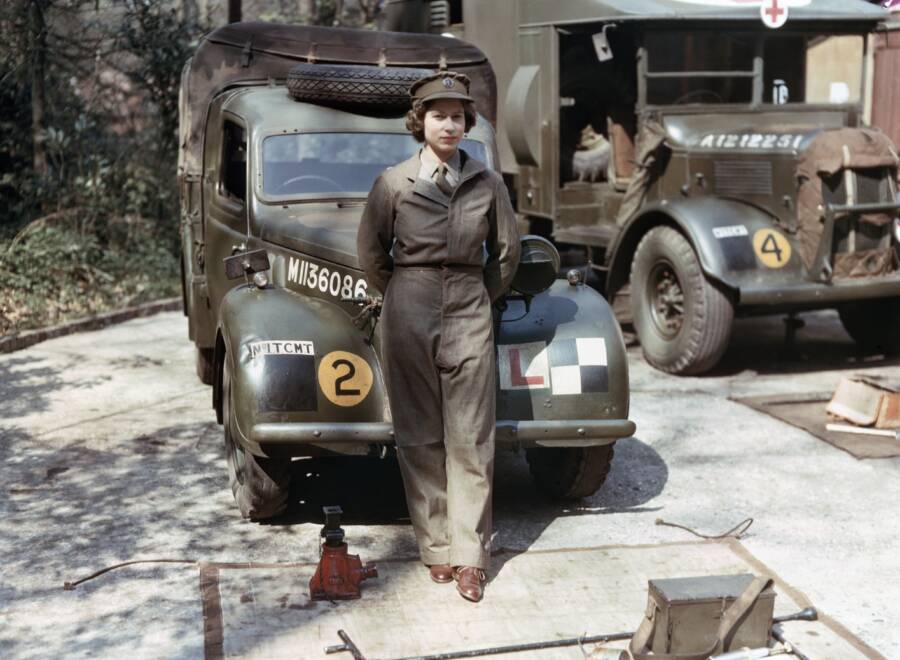 Although Elizabeth worked closely alongside other ATS enlistees, her royal title did mean she had to make certain concessions. Rather than eating with her peers, Elizabeth often had to dine in the officer’s mess hall. And instead of living at the camp full-time, she slept at nearby Windsor Castle.

By July 1945, Elizabeth had received a promotion to Junior Commander.

“She took immense pride in the fact that she was doing what other girls of her age had to do,” said the princess’ governess Marion Crawford, “and apart from coming back to Windsor to sleep, she kept strictly to the routine of the mess, taking her turn with the others as duty officer, doing inspections, and working really hard on the maintenance of cars.” 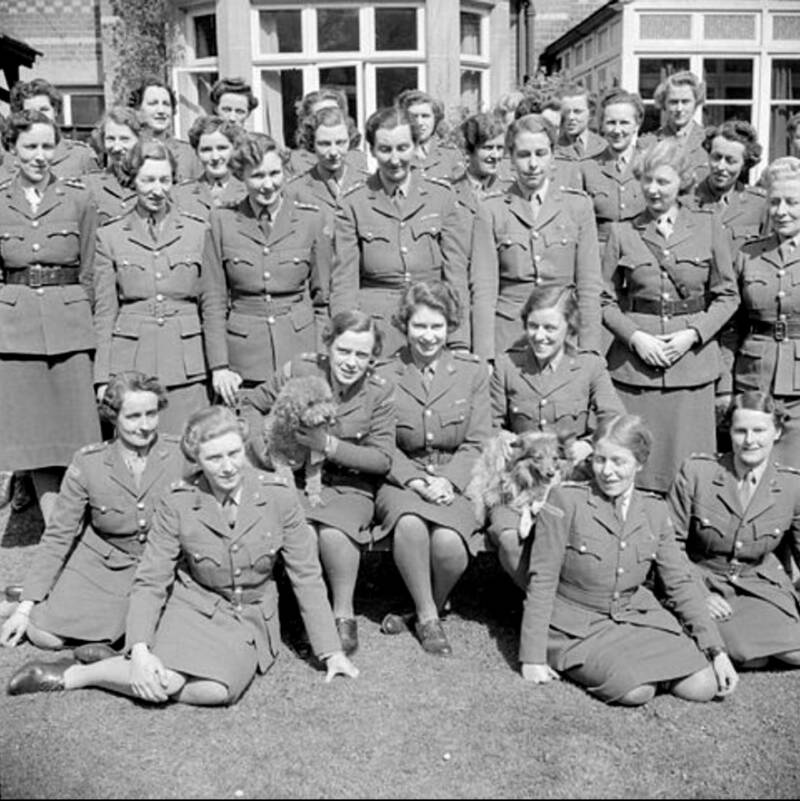 Imperial War MuseumsPrincess Elizabeth at the center of her ATS unit in April 1945.

According to the National World War II Museum, women in Britain who were under the age of 30 and unmarried at the time were required to enlist in the armed forces, work on the land, or join an industry. Elizabeth didn’t want special treatment due to her royal status — she simply wanted to do her part.

The Life Of Queen Elizabeth During World War II’s Aftermath

When Germany surrendered to the Allies in May 1945, Londoners took to the streets to celebrate the end of the long war. Not wanting to miss out on the fun, Elizabeth and her younger sister sneaked out of Buckingham Palace and joined the crowds. The future queen blended in thanks to her ATS uniform.

“We were terrified of being recognized — so I pulled my uniform cap well down over my eyes,” recalled Queen Elizabeth in a 1985 BBC interview, as reported by Tatler. 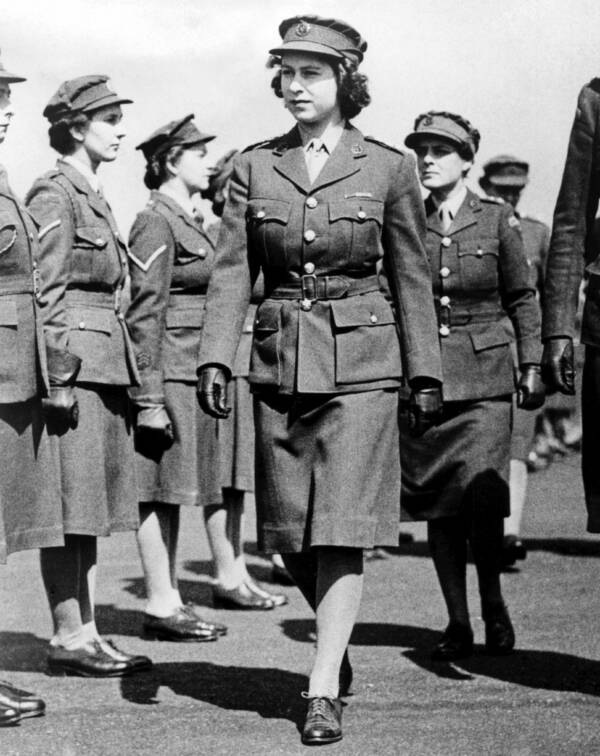 NCJ Archive/Mirrorpix/Mirrorpix via Getty ImagesPrincess Elizabeth in her ATS uniform around the time of V-E Day.

Partying with more than 50,000 revelers — and reportedly even joining a conga line through the Ritz — made an impression on the future queen. “I think it was one of the most memorable nights of my life,” she said.

Less than seven years after the war ended, “Princess Auto Mechanic” was coronated as Queen of the United Kingdom and other Commonwealth realms at age 25. In many ways, the service of Queen Elizabeth during World War II helped prepare her for a lifetime of service to her country.

World War II was a formative experience for Britain’s longest-reigning monarch. Next, check out vintage photos of a young Queen Elizabeth II, and then read about the abdication of Edward VIII that put Elizabeth in line for the throne.