The Clubhouse at Aquia Harbor's "Patriot Day 2022 Seafood Sunday" menu is just the latest in a long line of marketing gimmicks from brands trying to capitalize on tragedy. 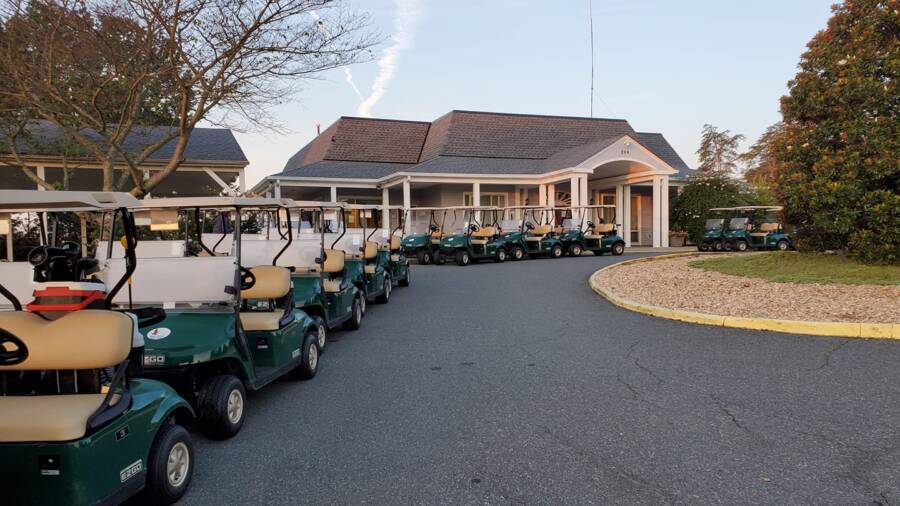 As the 21st anniversary of the September 11th terror attacks approaches, one restaurant in Virginia decided to commemorate the event in what many considered a tasteless fashion: decking out their menu with 9/11-themed items.

The “Patriot Day 2022 Seafood Sunday” menu had been advertised by The Clubhouse at Aquia Harbour in Stafford, Virginia, Newsweek reported. And although the menu has been taken down, it had already made its rounds on social media — with plenty of backlash.

A tweet from Washington D.C. native Brian Sasser called the menu advertisement “appalling” for featuring items such as the “Never Forget Sampler,” “9-11 Oysters,” the “Flight 93 Redirect” hot crab dip crostini, and the “2977 Chowder” — a reference to the official death toll of the terror attacks.

And for couples who sought to try everything, the restaurant also offered a $50 “Never Forget Sampler,” which the restaurant noted would “Save $22!” on “Eats and Drinks for 2!” They even offered a themed beverage to go with their seafood specials, the “Remember-tini,” a key lime and coconut rum cocktail served up with whipped cream and a honey graham rim. 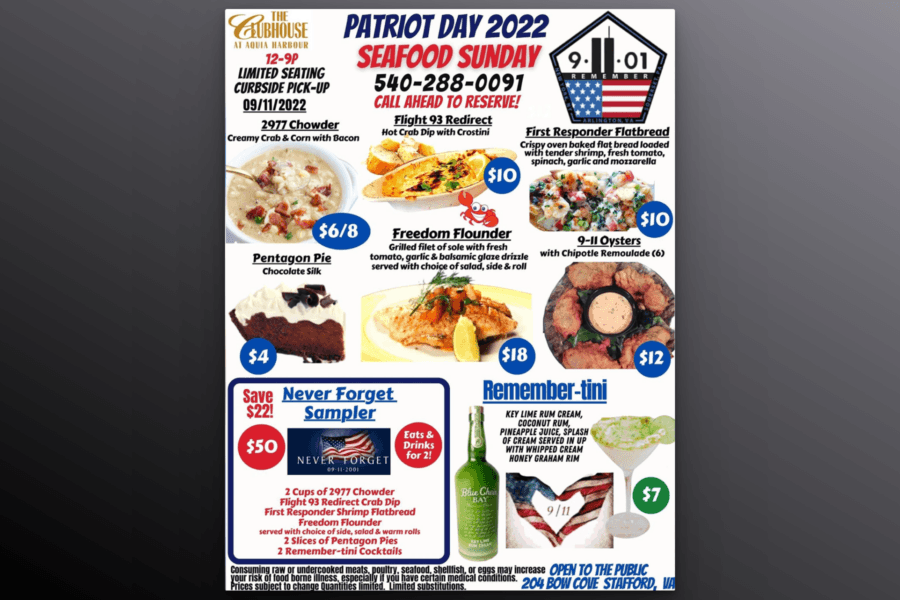 Other Twitter users responded, calling the menu items “vile” and “insensitive.” According to the Virginia Department of Veteran Services, the state is home to over 780,000 veterans, making up more than 9 percent of Virginia’s population.

“This is so awful for anyone who lost someone on 9/11 or people who watched it happen right in front of them,” tweeted user Kathleen Schmidt. “I’m one of those people.”

Other reactions ranged from, “This seriously can’t be real. Is it real?” to, “I haven’t cringed this hard since the first time I saw the ‘atomic roll’ on a sushi menu.”

Other users compared this very real promotion to a Subway advertisement shared by The Onion in 2018 for “Subtember 11th,” saying “You Will ‘Never Forget’ This deal.”

Of course, the biggest difference is that The Onion is a satirical news site. And in that instance, the Subway advertisement wasn’t real, but a commentary on how businesses seek to profit off the tragedy of 9/11. 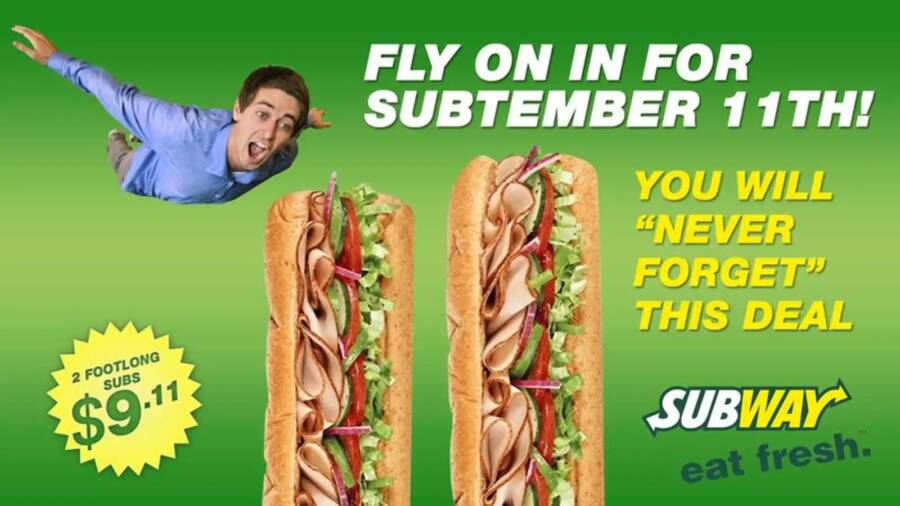 The Onion/TwitterA fake, satirical Subway promotion tweeted by The Onion in 2018.

The Clubhouse isn’t the first brand to use 9/11 for marketing, though. Others have felt the need to capitalize on the tragedy publicly on social media in the past, many of which have been collected in an article from HuffPost.

Perhaps one of the more egregious examples came from another Virginia business: Bikram Yoga. The studio was one of many locations founded by yogi Bikram Choudhury, the subject of the Netflix documentary Bikram: Yogi, Guru, Predator who has been accused of rape, sexual assault, and racism.

Evidently, misplaced, tone-deaf brand tweets and promotions regarding 9/11 had become so commonplace that in 2019, Fast Company deemed it newsworthy to note that most companies had in fact chosen to simply remain silent — except for one “noteworthy blip” from Ledo Pizza in Annapolis, Maryland.

The pizza chain reportedly tweeted “#NeverForget,” accompanied by a photo of its square pizza, with olives and pepperoni fashioned on top to look like the American flag. 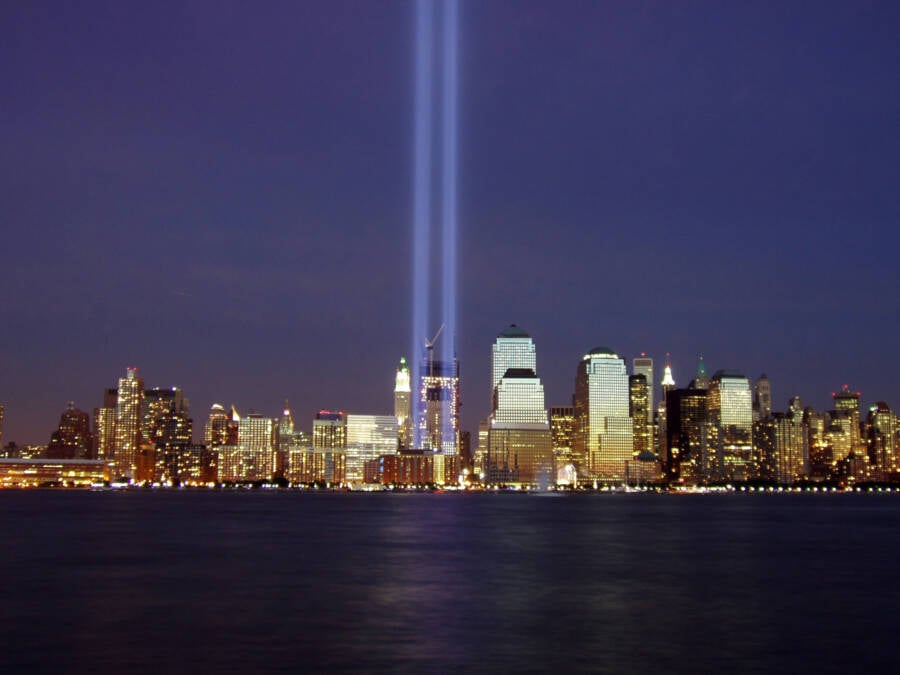 As time has passed, and as social media has become a core part of many people’s lives, brands have tried to adjust to the rapidly changing advertising sphere, often sharing tweets and social posts that sound closer to a friend’s commentary than an advertisement.

And while it may have been fun — for a time — to see companies like Wendy’s replying to users or starting beef with their competitors in a friendly back-and-forth on Twitter, it’s clear that most people today have grown wary of how brands engage with online audiences.

The widespread criticism of 9/11 marketing, brands profiting off the tragedy, and the general disillusionment and cynicism regarding brands’ social media presence combine to make The Clubhouse at Aquia Harbour’s Patriot Day menu particularly misguided.

On Tuesday, the Clubhouse’s manager George White issued a public statement, saying, “I apologize for those I offended with the 9/11 seafood Sunday post. My intention was to bring attention to that horrific day 21 years ago. To honor those who lost so much as well [as] those who gave everything that day. We will have a new theme tomorrow.”

On Wednesday morning, less than 24 hours after posting the original menu, the Clubhouse released its updated Sunday menu with a football theme. Items like the “Freedom Flounder,” “2977 Chowder,” and “Pentagon Pie” were replaced by the “Fumble Flounder,” Champ Chowder,” and “Coin Toss Chocolate Pie.”

After learning of this backfired attempt at commemorating 9/11, read about the bizarre 9/11 conspiracy theories that some people actually believe. Then, learn some of the most heartbreaking stories of 9/11 victims.