9/11 Conspiracy Theories That Many People Actually Think Are True

Millions of people have spent the last two decades spouting alternative ideas about what may have happened on September 11, 2001, but are any of these 9/11 conspiracy theories even rooted in truth? 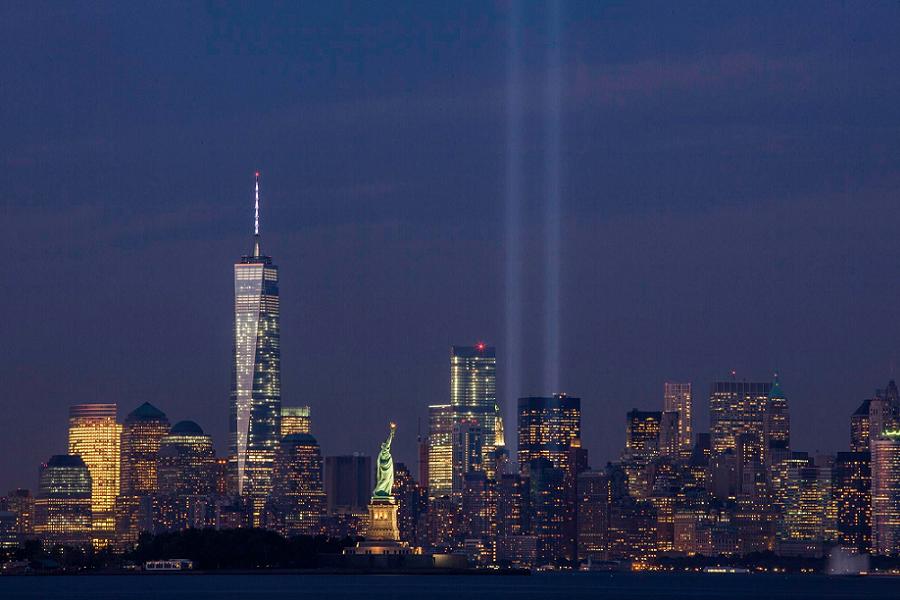 Wikimedia CommonsTo this day, a number of both diverse and astounding 9/11 conspiracy theories continue to flourish.

In a little over an hour on the morning of Tuesday, September 11, 2001, Americans — and most everyone else in the world — went on an emotional roller coaster as news of the attacks came in. Millions wondered whether there were more attacks planned, and called out from work to watch the whole thing unfold live on CNN. Meanwhile, some almost immediately began developing 9/11 conspiracy theories claiming that the truth wasn’t what we were all told and that it may have even been an inside job.

The fact that the attacks were indeed televised and shot from multiple angles — to say nothing of their being witnessed firsthand by literally millions of people — just makes it all the more bizarre that millions of people still don’t believe that what they saw really happened the way it seemed to.

According to a 2010 poll by the Angus Reid Public Opinion group, a full 15 percent of Americans believe that the Twin Towers were brought down by demolition charges, rather than by the two quite large aircraft we all watched hit them in real time.

This isn’t an isolated belief held by a few on the fringes; a lot of people feel this way. Here are four of the 9/11 conspiracy theories that some of those people believe represent the truth about what happened on that horrible day:

9/11 Conspiracy Theories: The Attack Was A Cover For A Robbery 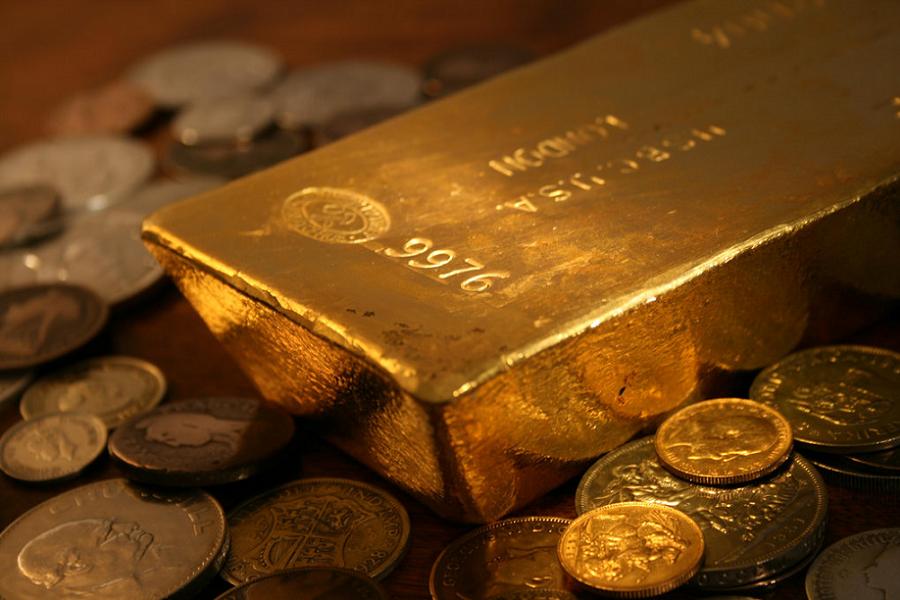 Bullion Vault/FlickrThough the supposed details are murky at best some say the 9/11 conspiracy was a smokescreen for a heist.

One of the relatively conservative 9/11 conspiracy theories floating around the internet is based on the premise that the commodities exchange inside the World Trade Center stored $950 million in vaults underneath the building. After the wreckage was cleared, only $230 million was recovered.

Conspiracy theorists therefore contend — on no evidence at all, mind you — that the attacks were staged as a cover for unidentified thieves to crack those safes, take exactly $720 million, leave the rest, and disappear without a trace.

The alternative possibilities — that the gold might have been destroyed in the collapse and fire, or that it was never there in the first place — don’t seem to have occurred to anybody holding this belief. Another thing that seems not to have occurred to robbery theorists is that there’s no obvious reason for thieves to stage an additional two hijackings and crash the planes into A) the Pentagon, and B) an empty field in Pennsylvania.

This theory, like many 9/11 conspiracy theories, is a case of inductive reasoning at its worst. Unlike deductive reasoning, which works down from a big theory to make small predictions, inductive reasoning works upward from small observations to craft large explanations from very little evidence. Unfortunately, like a hammer used to open a wine bottle, it’s not always the appropriate tool for the job.

In this case, theorists start with a small observation — that there was allegedly a lot of money inside the World Trade Center — assume that people would do anything to steal it, and then fabricate a conspiracy to bring down the towers so that persons unknown could later sneak in and rummage through still-burning rubble.

The fact that these thieves killed thousands of people to get their money just shows how ruthless they are, theorists believe. Any fact that seems to argue against the robbery hypothesis thus gets inductively twisted around until it supports the hypothesis instead. The total lack of evidence for any of this only proves how correct it must be. 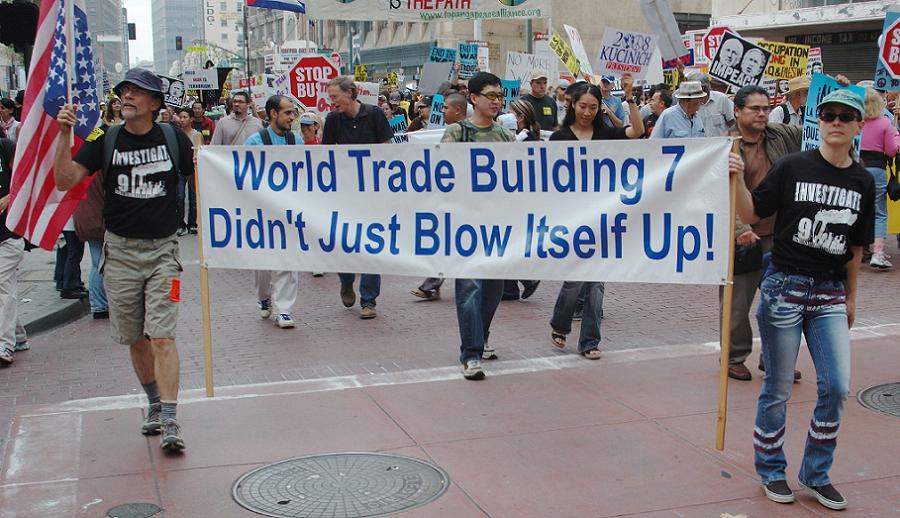 Wikimedia CommonsCountless demonstrations have sought to draw attention to the various 9/11 conspiracy theories that have gained traction.

On July 24, 2001, New York real estate mogul Larry Silverstein signed a lease with the Port Authority to take over the World Trade Center. Six weeks later, he was on the phone with his insurance company, filing a multibillion-dollar insurance claim for the property he had just signed for. The “inside job” theory holds that the then-70-year-old man staged the attacks in much the same way — and for much the same reason — that the mob would bust out a bar and grill: as an insurance fraud scheme.

When making the case for this belief, conspiracy theorists cite the fact that Silverstein was recorded telling firefighters to “pull it” immediately before Building 7 (which Silverstein’s company had built) collapsed, as well as the BBC’s report that the structure had fallen several minutes before it actually did.

This is one of those cases where a little knowledge can actually confuse you more than total ignorance. Proponents of the “pull it” hypothesis have a lot of scattered, largely unrelated facts that they cobble together to paint what, to them, is a clear picture of impressive malfeasance.

It doesn’t help that Silverstein did in fact later take his insurance company to court and argued that each plane represented a separate terrorist attack, so he should get double his policy coverage. While this is about as sleazy as it gets, it’s not evidence that Silverstein staged the attacks (if he had, he’d have probably sent three or four planes to file extra claims).

As for the other stuff people think supports the inside job theory: “pull it” was instead Silverstein’s way of telling the fire department to give up trying to save the building and just get their people out, the BBC report was made on the spot without confirmation, and the lease deal, while eerily timed, is not so outlandish a coincidence as to justify accusing a businessman of masterminding the atrocity of the century. 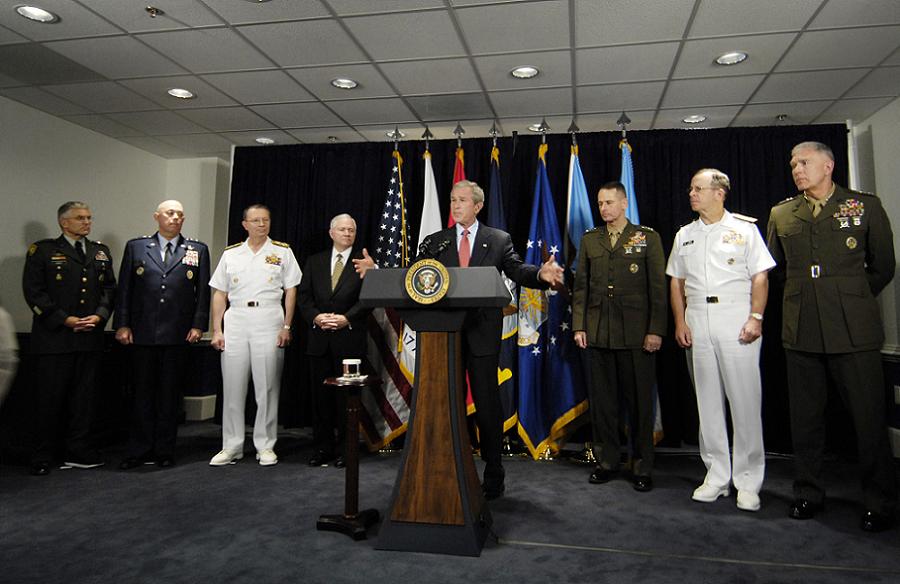 Wikimedia CommonsPerhaps the most persistent September 11th conspiracy theory holds that President Bush used these attacks to provide a rationale for going to war in Iraq.

It’s early 2001. The economy isn’t doing so great. The Chinese air force has captured an American spy plane. The last election was a farce. It’s the Summer of the Shark. President Bush has mediocre approval ratings. The only thing that will solve our political problems and lift America out of this slump is a good old-fashioned war, preferably someplace where there’s a lot of oil, and the sooner we can make it happen, the better.

The only problem is, there’s nothing to really motivate the people to get behind the Commander-in-Chief. That’s when it occurs to someone deep in the bowels of Halliburton: Strike down the Twin Towers as a pretext for invading Iraq and stealing all the oil.

It’s brilliant, and it’s guaranteed to get the American people in line for whatever sinister agenda Bush wants to ram home over the next seven years in office. The only way it could possibly go wrong is if some exceptionally bright twentysomethings spent a few hours Googling things and blew the lid off of the whole affair after the fact.

Nobody is claiming that 9/11 wasn’t good for the Bush Administration’s poll numbers. Overnight, George W. Bush went from a potential lame duck to a dashing protector of the realm.

Ten days after the attack, Gallup reported a 40-point spike in Bush’s approval ratings to an unprecedented 90 percent. Without this mandate, it’s unlikely that Bush would have been able to push America into wars in Iraq and Afghanistan or drive through various repressive laws like the Patriot Act.

But let’s get real. This theory — perhaps the most popular of all 9/11 conspiracy theories — holds that Bush either staged the attack or let it happen despite warnings so he could cozen the nation into unnecessary wars in the Muslim world.

This seems like a bit of a stretch, to put it mildly, given that Afghanistan was already exporting 90 percent of the world’s heroin at the time and Saddam Hussein was in violation of several UN resolutions, factors which made both countries perfectly legitimate targets for intervention under international law.

The theory also presumes that a sitting president of the United States either ignored or positively approved of a plot to kill thousands of his own citizens so that war could be declared on Iraq, but that no hijackers could be found who were actually from Iraq or Afghanistan, so they hired Saudis and Egyptians instead.

In other words, George Bush pulled off a brilliant false-flag attack on his own country in order to justify a war against two specific countries, but then his minions forgot to hire people from those countries as attackers, thus forcing the administration to spend the next year and a half cooking up flimsy connections between Al Qaeda and the one man Osama bin Laden probably hated worse than Bush: Saddam Hussein.

All of this to justify two wars that could probably have been done at any time and without all the televised murders.

September 11th Conspiracy Theories: It Was A Jewish Plot 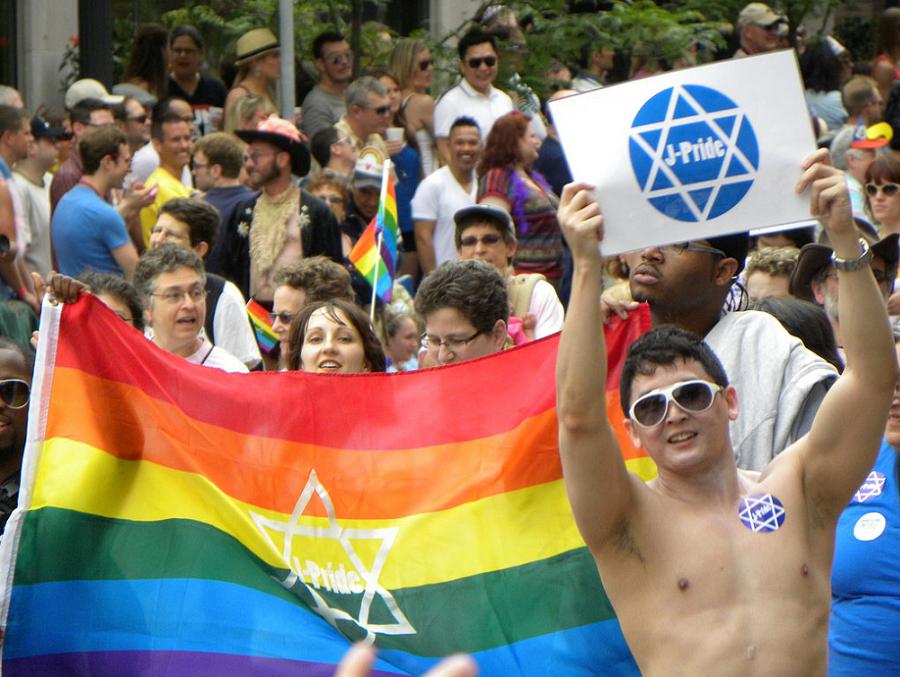 Fibonacci Blue/FlickrSome of the more hateful 9/11 conspiracy theories are informed by anti-Semitism.

We would be remiss in discussing 9/11 conspiracy theories if we didn’t at least mention the Israel hypothesis. In this theory, the attacks happened essentially the way they were reported to have happened, but with Mossad pulling the strings instead of Al Qaeda.

This opinion isn’t overly popular in the United States, but is wildly so in the Islamic World, with 19 percent of Palestinians, 31 percent of Jordanians, and a staggering 43 percent of Egyptians answering pollsters that they think Israel did the whole thing. The same poll found that only 16 percent of Egyptians think Al Qaeda was responsible for the attack, with another 12 percent blaming the U.S. government.

This theory, presented as it is without a shred of evidence, may be dismissed without evidence, but it does paint a very bleak picture of the world these theorists imagine exists.

In order to believe that Israel staged 9/11, it is necessary to believe that A) Israel is run by suicidally risk-prone maniacs, B) those same maniacs are supernaturally good at keeping secrets quiet for decades, C) Osama bin Laden was lying when he took credit for the attacks, and D) American intelligence is either incapable of figuring this one out, or it has and doesn’t really care that it was Ariel Sharon the whole time.