Born with a rare disease that made her legs and feet grow to an enormous size, Fanny Mills attracted large crowds while performing as the “Ohio Big Foot Girl” throughout the 1880s. 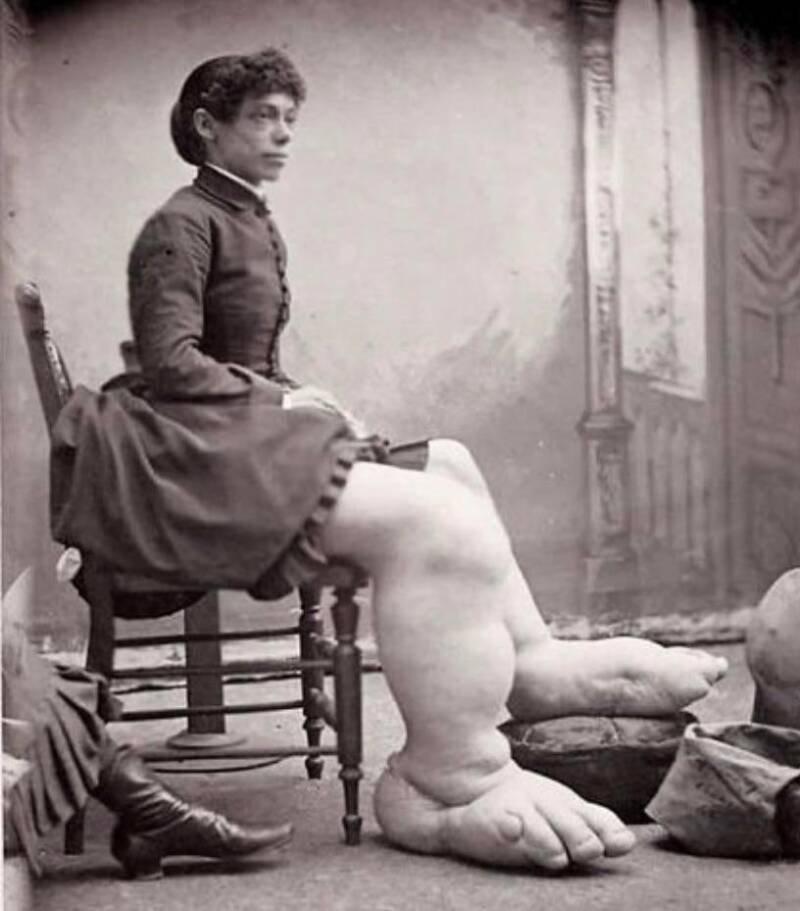 From the waist up, Fanny Mills looked like a normal woman. But her fame came from her feet. Mills, also called “Ohio Big Foot Girl,” had a condition that caused her feet to grow to an astounding size.

From 1885 to 1887, Mills set out to profit from her condition. She “performed” in dime museums — popular attractions that featured oddities like two-headed calves — up and down the East Coast.

Audiences flocked to see her. As a result, Mills could sometimes earn as much as $4,000 a week.

Fanny Mills was born in England around 1860, and immigrated with her family to Sandusky, Ohio, at a young age. Early on, her parents could tell that something was different about their daughter.

Before long, Mills’s feet swelled to an astonishing size. Most accounts state that her feet were 19 inches long and seven inches wide. Mills reportedly wore shoes made from three goats’ skins and socks made out of pillowcases. 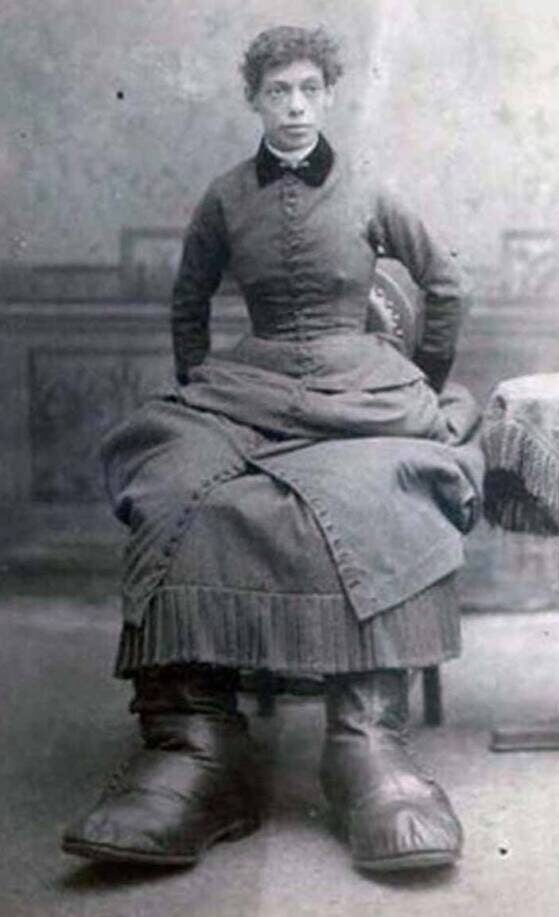 A reporter who visited Mills at the family home described her condition, saying: “Her feet look like two immense hams. The toes are irregular, and the little toes are represented by two little knobs.

“There are no toenails, although the places where they should be are clearly defined.”

Although Mills had shockingly big feet, the rest of her body looked normal. In fact, she weighed just 115 pounds. This jarring contrast made people look twice — and Mills began to wonder if she could profit from it.

In 1885, Fanny Mills decided to put herself on display. She enlisted the help of a friend, Mary Brown, to help her walk and remove her giant shoes. They set out together to the dime museums of the East Coast.

These so-called museums — also referred to as “freak shows” — became popular in the 19th-century. Though so-called “freaks” had been displayed as early as 1738, the attraction picked up steam when P.T. Barnum opened his American Museum in 1841.

Before long, visiting dime museums became a popular activity among many Americans. For a small fee — one dime — they could see strange wonders from around the world. Many of these wonders were actually people like Fanny Mills, whose medical condition left them few choices other than putting themselves on display.

So-called Big Foot Girl’s Milroy’s Disease made her a real draw at such museums. And, soon, dime museums promoted her to eager audiences. They boasted — falsely — that her father would pay a man $5,000 to marry her.

“Don’t permit two big feet to stand between you and wedlock tinged with fortune,” one poster advertising Mills trumpeted. 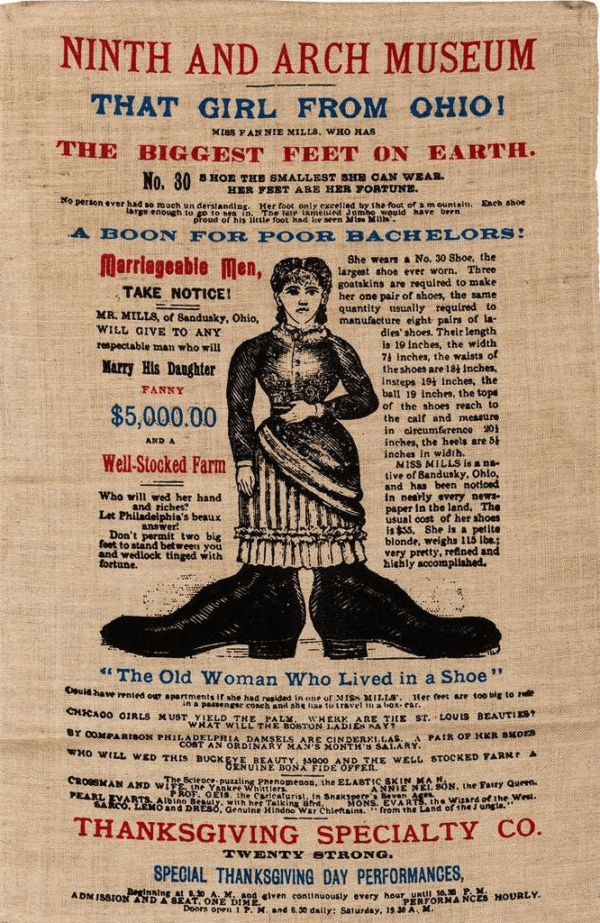 Public DomainA poster advertising Mills as having the “biggest feet on Earth.”

The advertisement went onto say that, “the old woman that lived in a shoe would have rented out apartments if she had resided in one of Miss Mills’.”

However, the advertisement about Fanny Mills left out one key detail: Mills was already married. She’d wed William Brown, Mary’s brother, in 1886.

Nevertheless, the “Ohio Big Foot Girl” became a mainstay of dime museums. Mills could sometimes earn as much as $150 a week, or about $4,000 today. 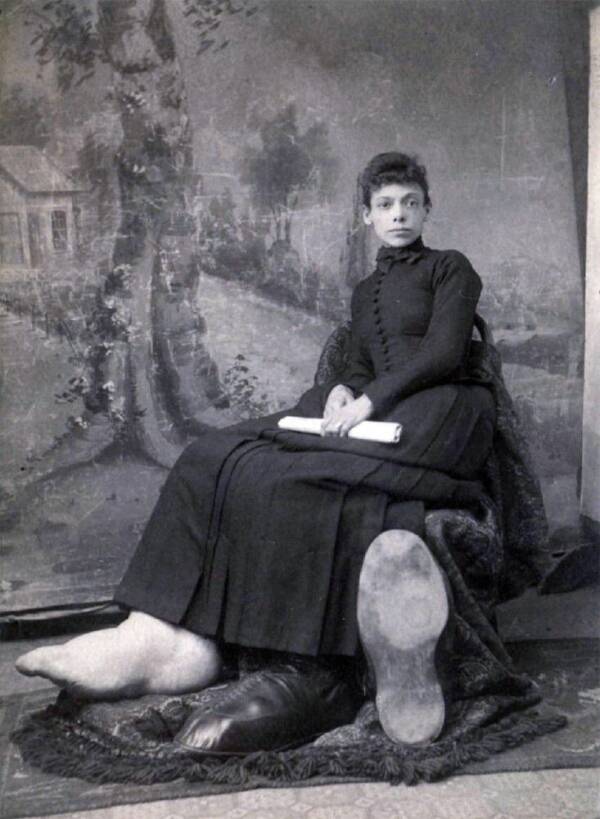 Public DomainFanny Mills with one shoe off, displaying her large foot.

Though Fanny Mills made a small fortune as “Ohio Big Foot Girl,” she didn’t have long to enjoy her earnings. In 1887, Mills gave birth to a stillborn child. Her health suffered afterward and Mills retired from dime museums in 1892.

She and her husband returned to Ohio, where Mills soon died at the age of 39.

For decades, dime museums continued on without her. But their days were numbered, too. As the world entered the 20th century, dime museums and freak shows began to decline in popularity. By the mid-20th century, they had fallen from the zeitgeist.

Their decline came about for a number of reasons. First, performers like Fanny Mills were no longer seen as “freaks.” Instead, society had begun to understand the medical conditions behind people like “Ohio Big Foot Girl.”

Second, crowds simply had more entertainment options. Carnivals could run rollercoasters more cheaply — and make more money — than they could with freak shows. And the proliferation of television and movies meant that people could watch performances at home or at the cinema.

In that way, Fanny Mills was very much a product of her time. Faced with a misunderstood medical condition, she resorted to performing at dime museums where, if she had to endure stares from strangers, she could at least get paid for them.

After reading about Fanny Mills, learn about Myrtle Corbin, the “four-legged girl” from Texas. Or, look through these facts about showman P.T. Barnum.