When the devout Christian teen allegedly declared her belief in God as she was shot in cold blood at the Columbine High School massacre, she became a sort of angel to the media. 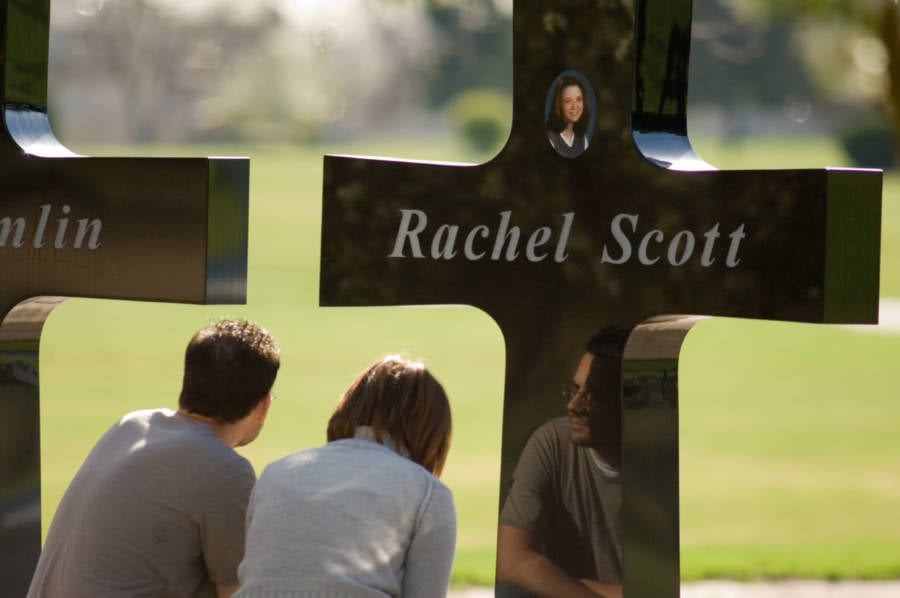 Eric Harris and Dylan Klebold’s school shooting at Columbine on April 20, 1999, shocked the world. The Columbine High School massacre also soon became a lightning rod for parents and lawmakers confounded by this unimaginable tragedy that left so many dead.

By mid-afternoon on that Tuesday, 12 Columbine High School students and one teacher were dead. Among the dead was 17-year-old Rachel Scott.

The Supposed Martyrdom Of Rachel Scott

Scott was a devout Christian with a strong interest in becoming an actress or a religious missionary after graduating from Columbine High School. The young girl was initially notable for Columbine investigators and historians for being the shooting’s first victim, but would later be discovered as far more than that.

Investigations after the tragic event reported that Eric Harris asked Scott whether she believed in God before he killed her. In the early days following Columbine, this claim was made more than once — Cassie Bernall was thought to have been killed specifically because she was asked this question and answered in the affirmative.

While time eventually revealed that this wasn’t the case for Bernall (but instead, for another victim for whom Bernall had been mistaken), it does seem to have comprised Scott’s last experience alive. Her mother, Beth Nimmo, claimed in interviews that her daughter tried to befriend Dylan Klebold and that he had grown fond of her. 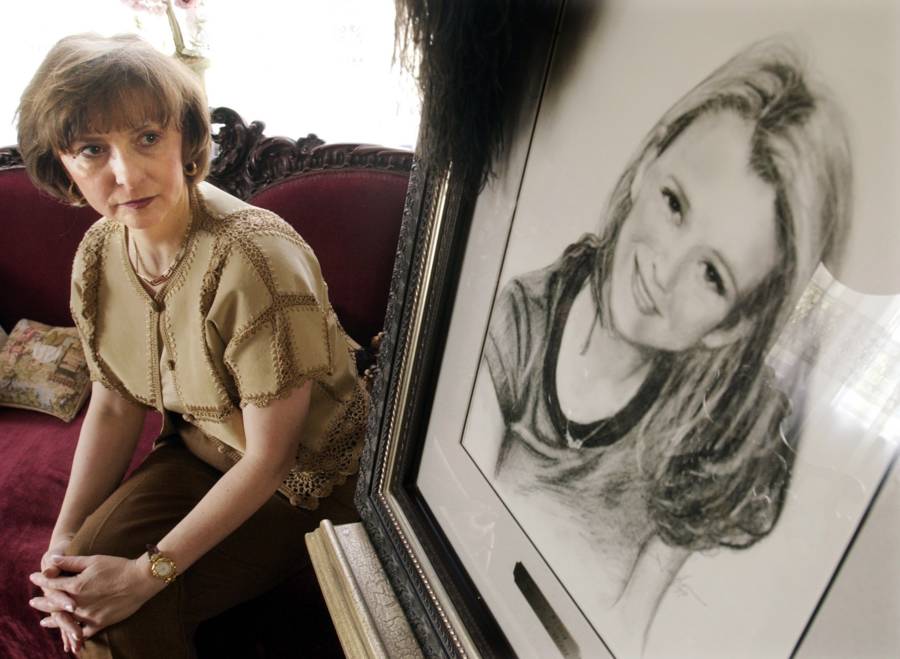 Nimmo also said that during the weeks before the Columbine massacre, both Harris and Klebold “mocked (Rachel) and made fun of her because of her Christian values. She was on their target list.”

While later investigations — particularly those included in Dave Cullen’s Columbine — categorically disagreed that the shooters had any religious, ethnic, or gender-based targeting in terms of victims, the nihilistic cynicism with which the two killers reportedly taunted at least two of their victims about their religious faith did seem to indicate that there was some additional glee in those particular kills.

Nimmo published Scott’s journals after she died in an effort to show the world how strong her daughter’s Christian values were and, presumably, to facilitate mentally processing that her 17-year-old daughter was shot to death. Both parents eventually co-authored Scott’s biography.

“I am not going to apologize for speaking the name of Jesus,” Scott wrote in her journals. “If I have to sacrifice everything…I will.”

Her father, Darrell Scott, promulgated her devout faith in two books of his own — Chain Reaction: A Call to a Compassionate Revolution and 2008’s Rachel Smiles: The Spiritual Legacy of Columbine Martyr Rachel Scott — the latter of which used excerpts from her journals.

In 2016, Scott’s story of facing down her anti-religious killers by being steadfast in her faith came to the big screen. I’m Not Ashamed starred Masey McLain as Scott. While the film generated decent box-office returns for a Christian film focused on a school shooting, and Scott’s parents did an admirable job of sharing their daughter’s memory through numerous books and interviews — the entire narrative of Rachel Scott’s final moments, sold as a product and perpetuated by the media in all sorts of formats, may have been more of a construct than the actual truth.

The official trailer for I’m Not Ashamed, which dramatized Rachel Scott’s death.

The Guardian‘s Jordan Hoffman argued that turning Scott’s death into a story about martyrdom was simply “exploiting this young woman’s horrible fate to fit a previously constructed phony narrative of oppression.”

So what really happened on the day that Rachel Scott was killed?

To be clear, what actually occurred inside Columbine’s classrooms, library, hallways, and cafeteria on April 20, 1999 is not entirely known, especially because eyewitness accounts are famously unreliable. Scott’s own brother, Craig, didn’t even realize he’d walked past his sister’s corpse that day as panic, adrenaline, and shock can create an insurmountable deficit in rational thinking and awareness.

The two shooters had intended on killing as many of their peers and classmates as possible in an attempt to beat Oklahoma City bomber Timothy McVeigh’s kill count and were forced to resort to their arsenal of firearms when the two main propane bombs they’d made failed to detonate. 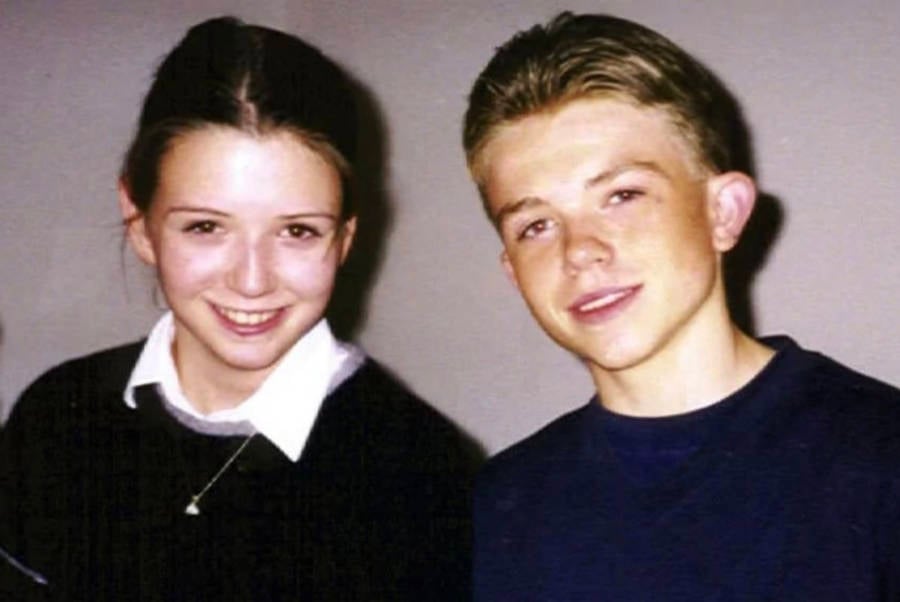 Columbine.WikiaRachel Scott and her brother, Craig.

“I heard the shot that took my sister’s life,” Craig told The Hollywood Reporter. “I thought it was a prank — that some seniors brought fireworks to school. When I escaped the library, I actually ran right past her body and didn’t realize it.”

According to Today, when Craig managed to exit the building and get to a phone, he sensed something terrible had happened to his sister. “I called my mom, and I said, ‘Mom, I’m OK, but I think there’s something wrong with Rachel,'” he said. It took until the following morning for his bad feeling, and her death, to be confirmed.

At the tail-end of the 1990s, the country was already adamant that violent video games, as well as certain kinds of music and movies, were responsible for pushing kids toward violence. Cullen described the media’s coverage of Columbine as the beginning of the industry’s desperation for “spectacle murders” — fitting the reportage to previously established mythologies and explanations. This is how tall tales of martyrdom in the face of tragedy occur. 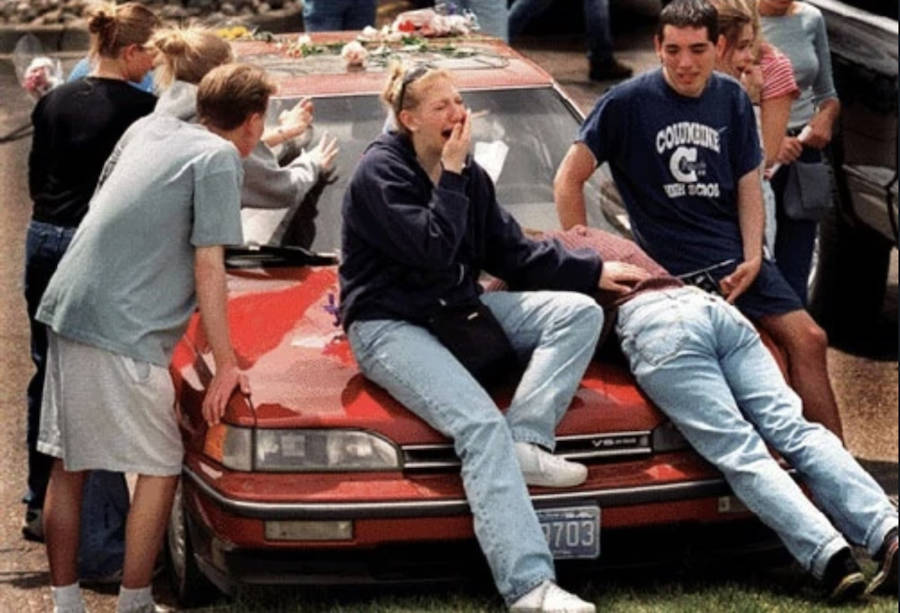 Columbine.WikiaFriends gather around Rachel Scott’s car, placing flowers on it in her memory.

Nonetheless, books, songs, and movies about supposed religious martyrs such as Rachel Scott shaped the narrative. The fervor to become such a symbol quickly permeated a big portion of an entire generation, with Washington Post journalist Hanna Rosin covering this phenomenon as early as October 1999.

She described this teenage obsession with faith-based death as a “kind of teenage hysteria, a Christian-sanctified death wish” directly influenced by the Columbine killings of people like Rachel Scott. “God has laid it on my heart that I’m going to be martyred,” a teenager named Tina Leonard told a Southern Baptist news service, Rosin reported. “When I told one of my friends, he said, ‘That’s awesome. I wish it could happen to me.'”

I’m Not Ashamed showed Harris and Klebold shoot Rachel Scott and mock her for her faith as she died. While she certainly was vocal about her religion before her death, she didn’t tell either of the shooters that she believed in God, before, during, or after they shot her.

A News Channel 5 segment with Beth Nimmo about I’m Not Ashamed.

At least, no police reports or investigations made any mention of it. Much of what actually happened to Scott at Columbine was based on testimony from the only surviving witness to her death — Richard Costaldo, who was having lunch with her when the killers appeared.

“They were yelling at her about God and do you believe in God,” he said. “That was literally the last minute of her life.”

Costaldo also claimed that he, too, was asked whether or not he believed in God and that when he said that he didn’t, that his life was spared. Nonetheless, the facts indicate that Rachel Scott didn’t know she’d be shot for telling the truth — which certainly would’ve made her a martyr — she just answered their question, terrified, hoping to live.

“The days right after…you’re in so much shock,” said Craig Scott. “You could ask me a question, and I could just sit there, looking at you, because I’m not even there.”

Scott’s parents would soon pick up the proverbial baton of religious faith left behind when she died — but her brother initially seemed preoccupied with visions of justice and retribution in order to mentally process his sister’s passing.

“I used to fantasize what it would be like to get revenge soon the shooters,” he said. “If I had just five minutes alone, what I’d do to them. And it started to eat me up.”

The first time Craig spoke about his sister’s death was in an interview with Katie Couric. He’d soon find himself talking to countless people about his sister, the trauma, and that it can be overcome. “I had no idea that would be something I would be doing a hundred, a thousand more times over the next 20 years.”

Craig and his mother have toured schools across the country in an effort to spread Scott’s story, that she died in cold blood and likely because of her faith. This has garnered the family a fair amount of flack from internet users who theorized this crusade was entirely motivated by profit.

A TODAY segment on Craig Scott, nearly 20 years after the tragic events at Columbine.

“We’ve stopped a dozen school shootings and 500 kids said we helped prevent their suicides,” said Craig Scott. “Money has never been our motivation. It’s a mission. I have friends from Columbine who ask, ‘How can you still talk about this?’ If they go on one trip with me, they’d understand.”

When the Scott family began wading through their daughter’s personal items following her death, they found an essay she wrote about her ethics — how compassion, optimism, and empathy were the main traits she’d tried to nurture in herself, and spread to others.

“She was talking about…things like not judging or labeling other people, looking for the good in others and being a leader, showing mercy and forgiveness,” said Scott, adding that his sister concluded the paper with the following:

“I have this theory that if one person will go out of their way to show compassion, it will start a chain reaction of the same.”

The Scott family’s Rachel’s Challenge nonprofit has spread this ideology to more than 25 million people to date. It gave them purpose, after a confounding loss that had no identifiable reason or cause. It provided the family with their own version of faith — that if Scott’s vision is shared, her death wasn’t entirely in vain.

“I think she would be proud of my family,” Scott said. “I hope to see her one day again…If she were somehow aware of what has happened with her story and her legacy, and to say, ‘Nice job, little bro,’ that would be pretty cool.”

After learning about Rachel Scott and her role in the Columbine High School massacre, read about the Trenchcoat Mafia and other myths associated with Columbine. Then, read about Brenda Ann Spencer, the woman who shot up a school because she didn’t like Mondays.