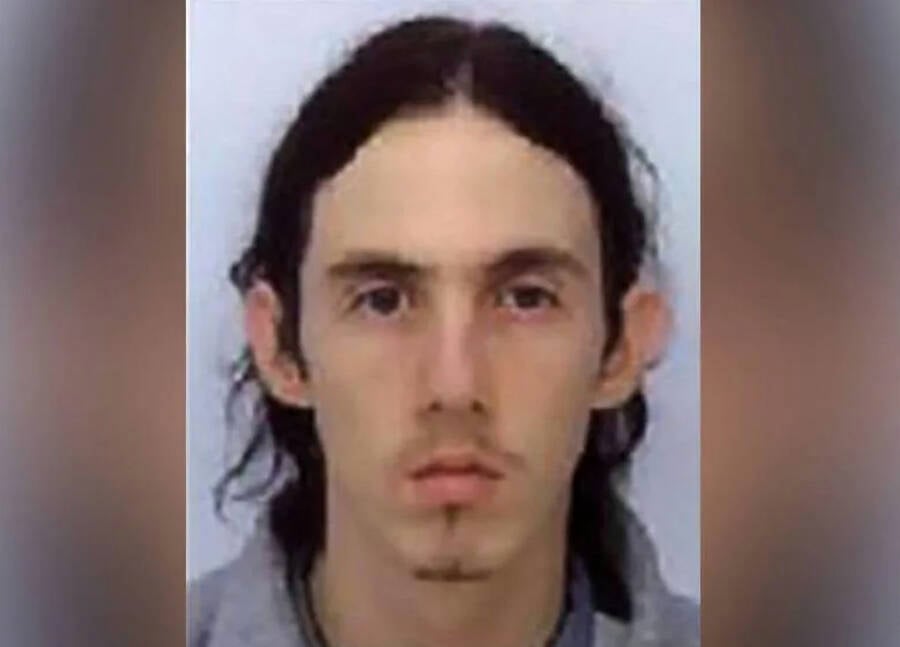 AFPRichard Huckle was arrested at Gatwick Airport in 2014, as he was returning home from Malaysia to celebrate Christmas with his family.

In 2016, British freelance photographer Richard Huckle was handed 22 life sentences for 71 charges of sexual crimes relating to 23 Malaysian children. According to CNN, it’s believed the 33-year-old raped nearly 200 babies, toddlers, and children in total. He was stabbed to death at Full Sutton prison in Yorkshire, England on Sunday.

Described as one of the worst pedophiles in British history, Huckle typically targeted children as young as six months and rarely older than 12 years of age. According to Sky News, the “gap year pedophile” engaged in this unprecedented number of offenses between 2006 and 2014.

Richard Huckle took advantage of his qualifications to teach English as well as poverty in various Malaysian communities to bring children under his control and away from their parents.

Unfortunately, things only got worse before Huckle would be arrested.

A Sky News documentary on Richard Huckle’s crimes and methods.

After committing 191 assaults, Huckle tried to sell footage and photos of the heinous acts online. He first used orphanages and schools to find and groom his victims, and then turned to the dark web to financially profit from them.

He even forced his victims to hold up signs that marketed his business.

In addition to his plans of crowdfunding the release of this data, Huckle operated a blog in which he awarded himself “Pedopoints.” He then wrote a 60-page treatise on his methodology, called “Pedophiles & Poverty: Child Lover Guide.”

The grotesque, virtual leaderboard of abuses is where the self-admitted number of victimized children was first noticed by authorities. Australian officials stumbled upon the document while investigating a pedophile website, which was said to have had 9,000 members before it was shut down.

Once police were notified of Richard Huckle’s extensive crimes in 2014, they arrested him at Gatwick Airport, when the unsuspecting pedophile was returning home from Malaysia to celebrate Christmas with his family.

A BBC News interview with a victim of Richard Huckle.

The National Crime Agency (NCA), which confirmed Huckle also operated in Cambodia, found over 20,000 illicit photos from his cameras and computers. According to Fox News, 1,117 of these files depicted rape or abuse.

The Old Bailey judge that doled out 22 life sentences in 2016 called Huckle’s extensive online guide a “truly evil document.” While the Ministry of Justice did confirm the criminal had been killed on Oct. 13, it added that it would be “inappropriate to comment further while a police investigation is ongoing.”

To their point, the Humberside Police said it was working closely with the Prison Service to investigate the death — which authorities are currently describing as “suspicious.”

While finding a dead inmate with stab wounds in his cell certainly points to an unnatural death, it’s safe to say the suspicion described here is less surprising and more expected. Pedophiles like Richard Huckle don’t typically fare well in prison.

Unfortunately, while investigators were able to recover a remarkable amount of criminalizing imagery from Huckle’s computer, a substantial amount of encrypted files remain inaccessible. With his death preventing their retrievability, it’s likely that several pedophiles who worked with Huckle will remain unidentified.

After learning about Richard Huckle getting stabbed to death in prison, read about the serial killer known as “the Angel of Death” getting murdered in prison. Then, learn about Congressional candidate Nathan Larson proudly admitting to being a pedophile and raping his wife.