Roman-Era Warship Preserved Underground For 1,300 Years Found In Serbian Mine

While the three ships were remarkably well-preserved, the largest was badly damaged by mining equipment. 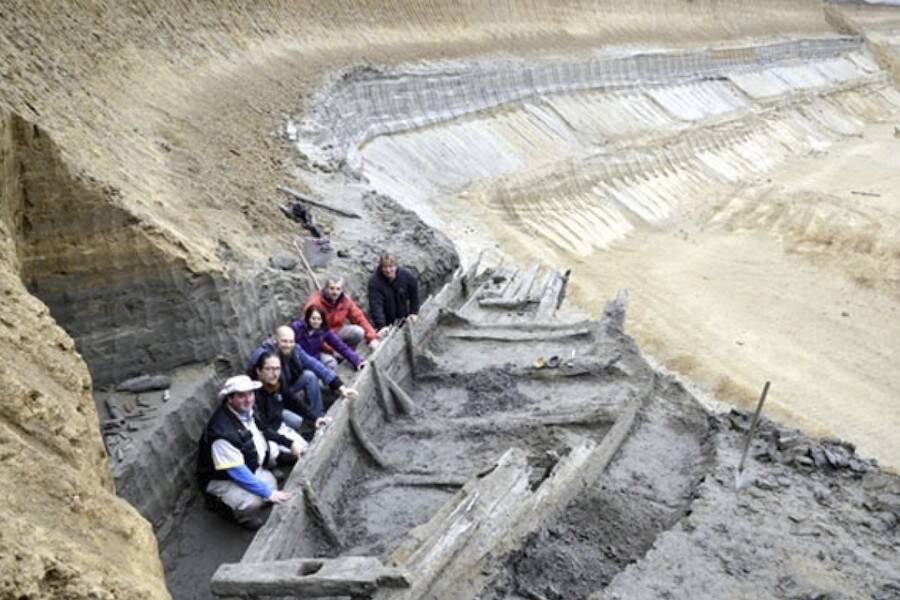 Uryadovir CourierThe large ship was badly damaged during excavations, with plans to entirely reconstruct it now at the top of the list for archaeologists.

Workers at the Kostolac surface mine in Serbia bumped into something far more interesting than coal this month. According to Ars Technica, the miners discovered three shipwrecks that were buried for at least 1,300 years — which appear to be Ancient Roman.

The two smaller ships were each carved from a single tree trunk. Researchers quickly noticed these vessels matched ancient descriptions of boats used by Slavic groups to ferry across the Danube River and attack the Roman frontier.

The largest ship is nearly 50 feet long with a flat bottom and appears to have been constructed with Roman techniques.

Perhaps most interesting is the site of discovery itself, as the coal mine sits near the ancient Roman city of Viminacium — once a base for Roman warships on the Danube.

The ships were buried under 23 feet of silt and clay which kept them extremely well-preserved for centuries. However, the miners tragically damaged the largest one during excavations. 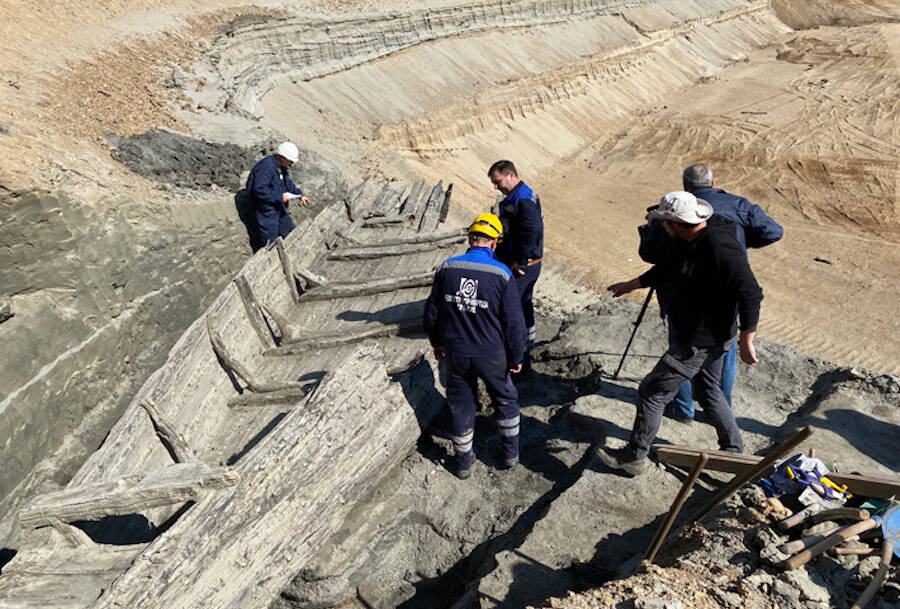 Institute of ArchaeologyKorac posits the three ships were engaged in battle, with Slavic attackers manning the two smaller longboats and Romans aboard the larger warship.

“The ship was seriously damaged by the mining equipment,” said archaeologist Miomir Korac, director of the Archaeological Institute and head of the Viminacium Science Project. “Approximately 35 percent to 40 percent of the ship was damaged.”

“But the archaeological team collected all the parts, and we should be able to reconstruct it almost in full.”

The plan for thorough reconstruction will help experts assess when these ships were built. Though the ships’ design suggests ancient Roman craftsmanship, later Byzantine and medieval shipwrights retained those techniques.

The damaged vessel would have used a triangular sail called a lateen sail and carried 30 to 35 sailors with a minimum of six pairs of oars. The nails and iron fittings on its underbelly suggest the ship had a rather lengthy career and was fixed several times.

As Korac described them, the two smaller longboats (or “monoxylons”) were “rudimentary,” despite one of them having carved decorations on its hull. 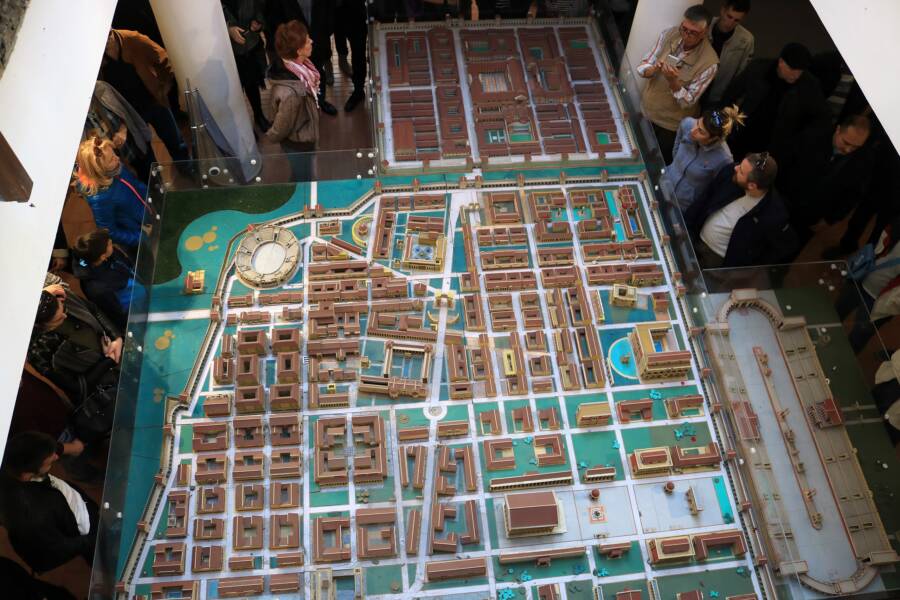 Wikimedia CommonsA model of the Roman city of Viminacium in modern-day Serbia.

“A monoxylon is not a combat ship,” said Korac.

“It is just a way to cross the river and invade on land. Facing larger ships, monoxylons could be easily defeated, as it is testified in sources from [the] 6th century mentioning a Roman fleet from Singidunum repelling barbarian attacks on the Roman Empire.”

Researchers currently theorize that a battle on the Danube between the Roman warship and Slavic fighters on two smaller boats ensued. With such proximity to the Viminacium naval base, it’s an educated guess — though no evidence besides the ships and location seems to support it.

To pin down the precise age of these vessels, Korac and his team sent samples of wood from oak trees buried nearby to a lab for analysis. Unfortunately, the COVID-19 pandemic has put a hold on those plans. 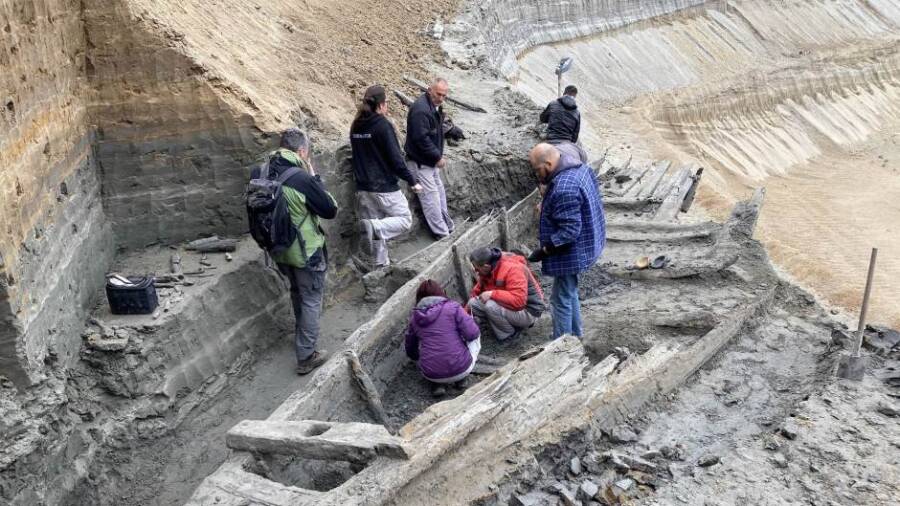 On the other hand, it certainly appears as though the large ship was built by the Romans. With no historical documents referencing any ports or infrastructure near Viminacium after it fell to invaders in the seventh century, the three ships would most likely hail from an era no later than that.

For Korac and his team, the lack of any personal belongings or artifacts at the site and the absence of traces of fire or combat damage, has been the most frustrating. He explained that this “lack of finds prevents us from identifying the boat without further analysis.”

As it stands, he’s quite confident that one of two scenarios took place before the ships met their final resting place.

“The ships were either abandoned or evacuated. They did not sink suddenly with cargo. If these happened during the barbarian invasion and withdrawal of Roman troops, the ship could be abandoned and sunken in order not to fall into the hands of the enemy.”

While further excavation work has been put on hold indefinitely, all three shipwrecks have been transported to the archaeological park nearby. Archaeologists promise more answers to come, as soon as today’s civilization can put a pandemic behind us.

After learning about the three shipwrecks discovered in a Serbian coal mine, read about the world’s five most intriguing shipwrecks. Then, learn about 60 ancient shipwrecks found in the Black Sea.