Rosemary West seemed like an unassuming British mother, but her home concealed brutal incest, beatings, and the remains of numerous young women — including her own daughter.

The human experience is rife with stories of monsters, from the creatures of Greek mythology and fantasy to real-life frights like serial killers and murderers. But are these monsters born, or are they made?

Given her fraught childhood, West’s evolution to adulthood of rape, sexual torture, and the murder of a dozen women including her own daughter and stepdaughter, may not come as a surprise, but the depths of her depravity certainly does.

Was Rosemary West Doomed From Birth?

Before Rose West became one half of a sexually sadistic murdering pair alongside her husband Fred, she was born Rosemary Letts in 1953 to parents Bill and Daisy. Her mother was remembered as beautiful, but also shy, damaged, and prone to depression that she treated with electric shock therapy.

Some experts later posited that perhaps this prenatal exposure to electrotherapy damaged West’s own psyche in utero, predisposing her to violence before she was even born. 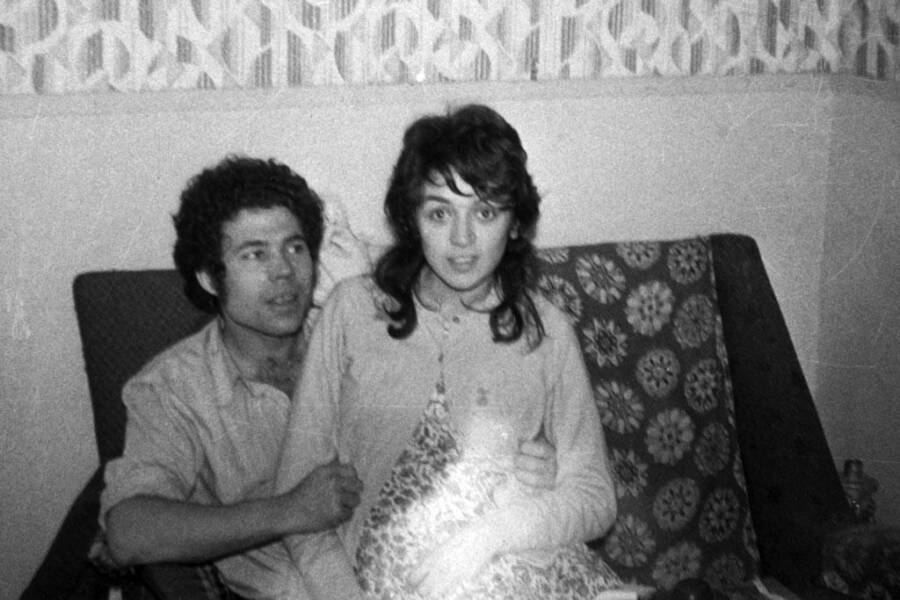 YouTubeRose West was 15 when she met the man she would marry and carry out sadistic acts with. Here are Fred and Rose West in 1971.

Of course, nurture, too, likely had a large role in establishing cruelty in Rosemary West. Bill, remembered as a superficially charming former-Naval officer was obsessed with cleanliness and regularly beat his wife and children for any infraction.

West’s father also suffered from psychological issues, namely, schizophrenia, and may have sexually abused her in childhood.

Young West also experimented with her sexuality by molesting her brothers, raping one when he was 12. She later harassed boys in her village too.

A neighbor remembered the future murderess: “She was a strange girl, but you wouldn’t have expected her to go on and do that…I do remember the family, I thought they seemed quite normal, but you never know what happens behind closed doors.” 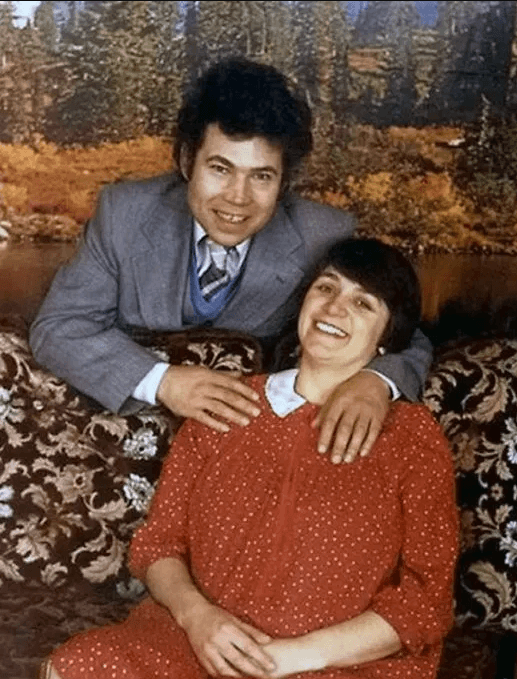 Wikimedia CommonsThe West’s resembled any normal couple, but inside themselves and inside their home was evil.

Wests’s early exposure to the intersection of sex and violence reached a fever pitch when at 15 she met Fred West at a bus stop.

Twenty-seven-year-old Fred was looking for Charmaine, his stepdaughter when he ran into teenaged Rosemary West. Later, that stepdaughter would become one of West’s first victims.

The couple soon married and moved in together against the will of Rose West’s father. Fred was sent to prison for a time and while there, 17-year-old Rosemary West became responsible for his eight-year-old stepdaughter Charmaine along with their daughter Anne Marie.

Rosemary West grew to hate Fred’s stepchild, particularly for her rebelliousness. Charmaine consequently went missing for good in the summer of 1971. When asked about the girl, Rosemary West claimed:

“Gone to live with her mother and bloody good riddance.” 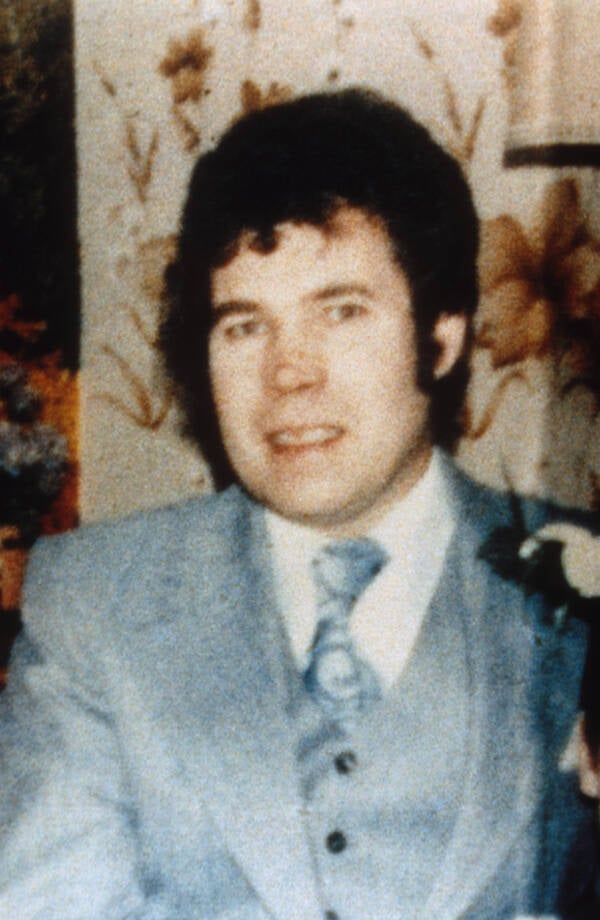 Getty ImagesFred West was allegedly charming enough to seduce women into his home before brutalizing them.

Later, the child’s mother, Rena West, came to look for her but then she went missing as well. This would become a recurring theme in the West household.

Meanwhile, Rosemary began doing sex work in their home while her husband watched once he returned from prison.

Life For The Children Of Rosemary West

From inside their modest semi-detached home on 25 Cromwell Street in Gloucester, England, the West’s began a sadistic killing spree. They opened their home to boarders and offered rides to vulnerable young women alone on the streets of Gloucester. Once in their home, these women would likely never leave again. 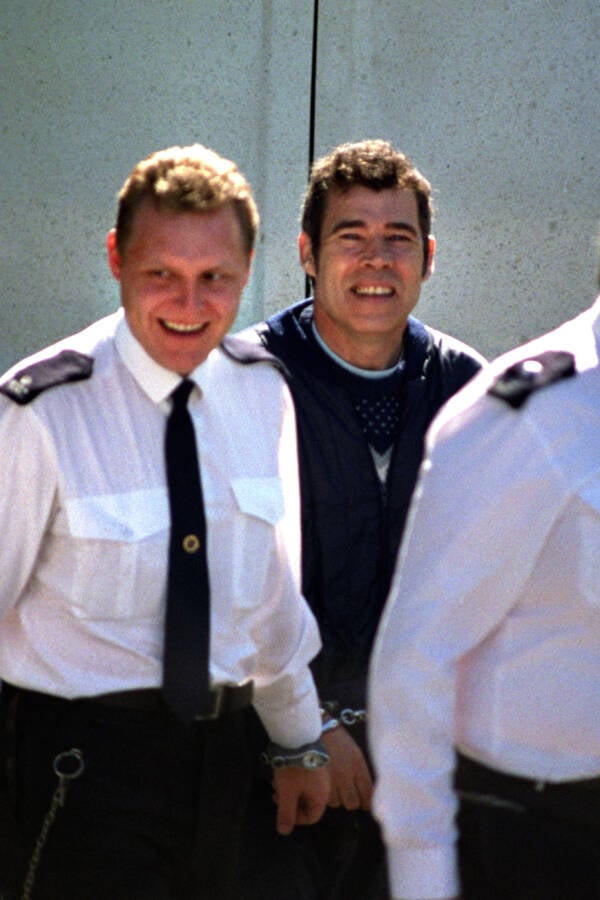 Barry Batchelor – PA Images/PA Images via Getty ImagesFred West later hung himself in jail in 1995 while his wife still serves a life sentence.

The West’s home was of the first serial killer dens to be dubbed a “House of Horrors,” as Rosemary and Fred West took in renters they then raped and murdered.

The children of the West family, including Rosemary West’s two biological daughters and one son, fared no better. They faced whippings, rapes, and ultimately, murder, as well.

Mae, one of the daughters, recalled the shame and disgust she felt while booking men for her mother’s sex work.

“People say I am lucky to have survived, but I wish I had died. I can still taste the fear. Still feel the pain. It’s like going back to being a child again,” recalled Anne Marie, Rosemary’s other stepdaughter by Fred. 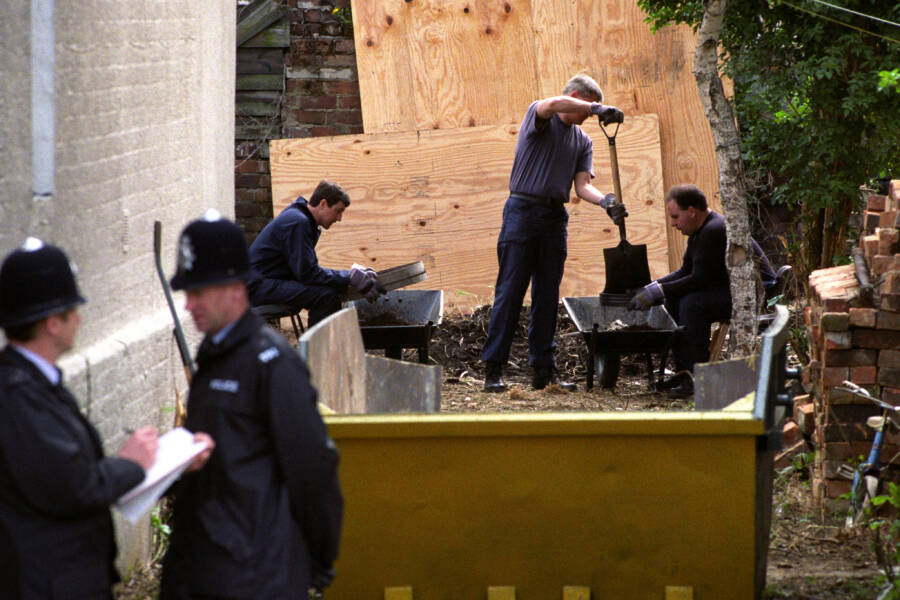 Barry Batchelor – PA Images/PA Images via Getty ImagesPolice sift through the garden of 25 Midland Road, Gloucester, the former home of Fred West before he moved to 25 Cromwell Street.

The girl would later testify to the brutality of the West household once the parents were caught in their murderous schemes. Both Mae and Anne Marie were repeatedly raped by their father, men who paid West for sex, and their uncle. Anne Marie even became pregnant and infected with sexually transmitted diseases by her father as a young teenager.

Once, she interfered with a fight between her stepmother and father, and he kicked the girl in the face with steel-toed boots. Rosemary was delighted, declaring: “That will teach you to try and be so cocky’.”

The West’s youngest daughter in 1992 confessed to a friend what their father was doing to them and social services were alerted. Though the daughters were briefly removed from their home, they were too frightened to testify, and consequently returned to their parents.

Inside The House Of Horrors Of 25 Cromwell Street 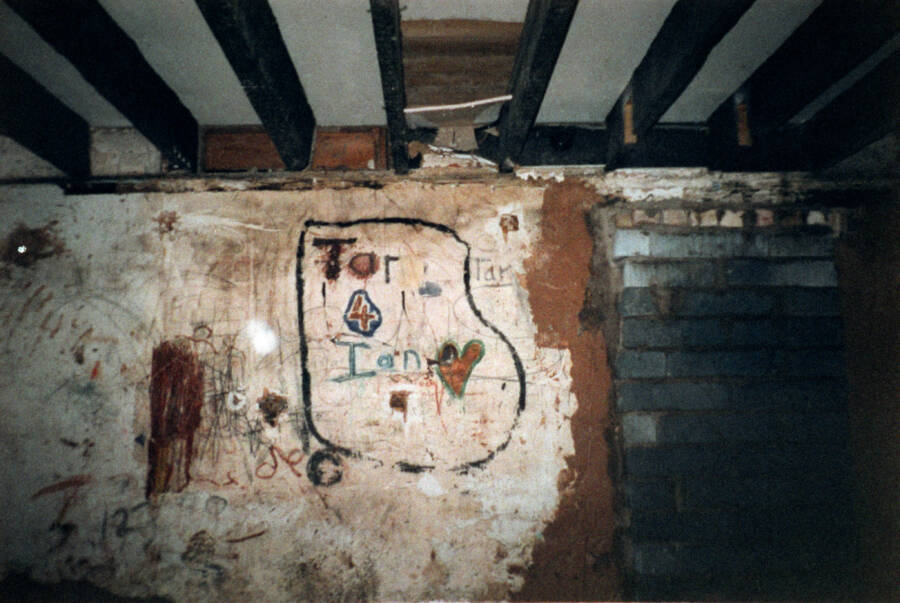 PA Images via Getty ImagesOn the walls of the basement of 25 Cromwell Street.

The cellar in the West home stood as a torture den for the couple, as well as the primary burial ground once the couple’s victims were killed. Once this cellar was filled, the remains of Rosemary West’s victims were put under the back patio.

Behind typical family outings and seemingly-normal public life, the West household carried on in this horrifying way for many years. That was, until Heather, the couple’s eldest mutual child, disappeared in June of 1987.

Rosemary West maintained to interested parties that her 16-year-old didn’t vanish, “She has not disappeared, she has made a conscious decision to leave… Heather was a lesbian and she wanted a life of her own.”

A dark joke from Fred about misbehaving children winding up under the patio like Heather revealed the truth to their children, however. Social workers investigating potential abuse alerted the police when the children mentioned fears that they would “end up like Heather.” 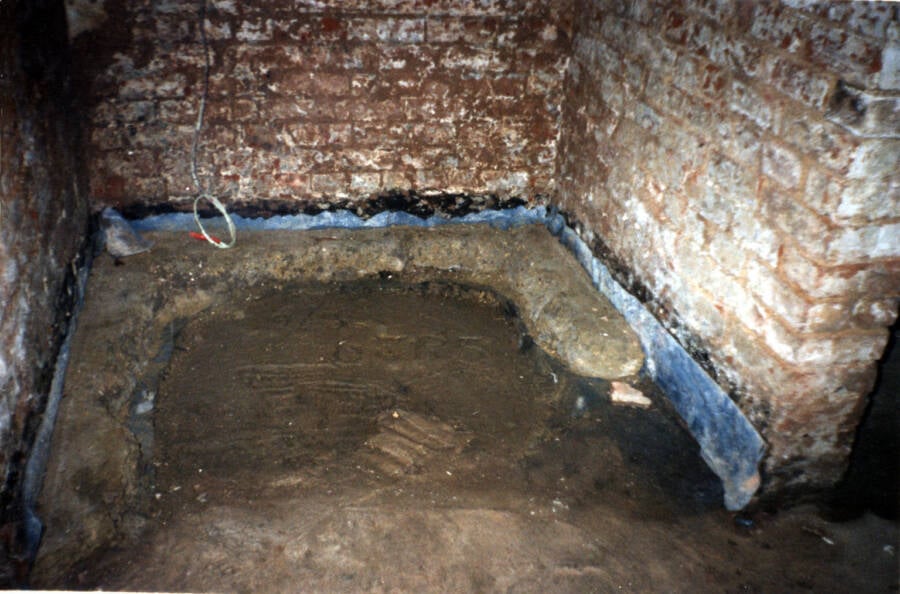 PA Images via Getty ImagesThe cellar of 25 Cromwell Street in Gloucester where the West’s committed their crimes. The house was later razed.

In 1994, police investigated the cellar, the garden, the patio, and beneath the floor in the bathroom, and found the remains of Heather, eight other females, and the bodies of Charmaine and her mother Rena. By this time, Fred and Rosemary West had been operating as a sadistic team for the last 25 years.

The victims still had restraints and gags attached to them, and one was mummified with duct tape, sporting a straw poked into a nostril, suggesting the Wests gave her enough oxygen to keep her alive while they unleashed their sadism. Most had been decapitated or dismembered, and one had been scalped.

Mae recalled:
“When the police came in and began their search in the garden, I felt as if I was entering a dream.”

Anne-Marie West interviews with a British true crime program about how the police failed to save her and her siblings sooner.

At first, Fred took the blame for all the murders while Rosemary West played dumb, remarking to her daughter: “That f***ing man, Mae, the trouble he’s caused me over the years! And now this! Can you believe it?” 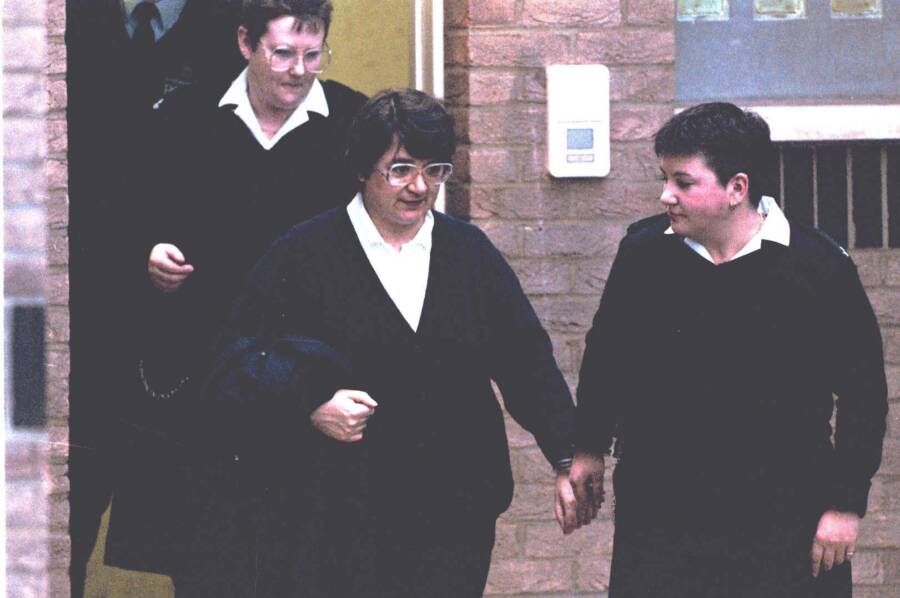 Barry Batchelor – PA Images/PA Images via Getty ImagesRosemary West has since said that she was ready to spend the rest of her life in prison, and tried to apologize to her daughter Ann Marie for the abuse she suffered.

But Rosemary West’s equal culpability was soon revealed and she was sentenced to life in prison in 1995. Fred escaped a similar fate by killing himself in jail, scribbling: “Freddy, the mass murderer from Gloucester.”

Born or become, Rosemary West is a living breathing example that monsters walk among us — happily, she’s doing so today behind bars.

For more stories of horrific abuse after this look at Rosemary West, read about “feral child” Genie Wiley and then check out the story of Louise Turpin, who helped keep her children in captivity for decades.