The Russian Navy has a history of recruiting and training beluga whales, seals, and dolphins to detect weapons, guard entrances to naval bases, and even kill intruders that enter the navy's territory. 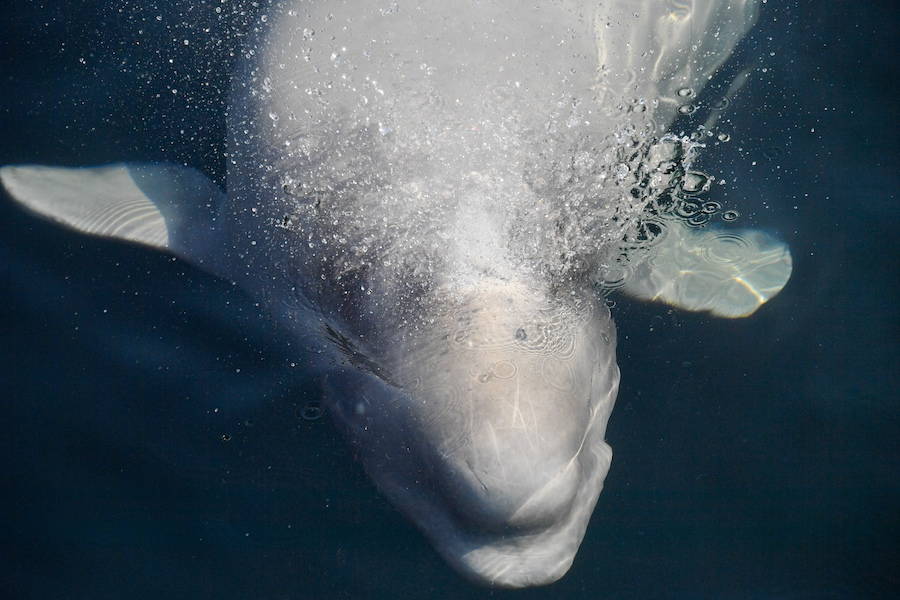 Yuri SmityukTASS/Getty ImagesRussia recently restarted an old military program that was meant to train sea mammals as operatives for its armed forces.

With enough patience, wild animals can be trained to do anything. A white whale that was found harassing Norwegian boats near the small fishing village of Inga is suspected to be a Russian-trained operative, according to Norwegian marine researchers.

The Guardian reported that a combination of the whale’s strange behavior and a marked harness that it wpre were indications that it could have been sent by the Russian Navy, which has a history of training sea mammals as military operatives since the 1980s.

The whale, which displayed familiarity with humans, was noticeably seeking out fishing boats and trying to pull the ropes from the boats’ sides, the fishermen said.

They also found a harness with the words “Equipment of St. Petersburg” fastened tightly around the neck of the whale, raising suspicions that the sea mammal was sent by the Russians to detect weapons from unknown vessels.

This theory may sound far-fetched at first, but according to Audun Rikardsen, a professor at the department of arctic and marine biology at the Arctic University of Norway (UiT), Russia has a long history of special training programs for wild marine animals to become military operatives. Russia has admitted to having a major military base not far from Norway.

“We know that in Russia they have had domestic whales in captivity and also that some of these have apparently been released. Then they often seek out boats,” Rikardsen told Norwegian broadcaster NRK. Rikardsen added that he had contacted his Russian researcher connections, who said the harnessed whale most likely came from the Russian navy in Murmansk.

Between the 1980s and the 1990s, Soviet Russia launched a program to recruit dolphins for military training. The Russians believed that they could use the sharp intelligence of dolphins to their advantage by training the animals to detect weapons and assist naval divers under water.

The program eventually ceased in the 1990s, but a report by TV Zvezda, the station under the Russia defense ministry, revealed that the country’s navy had resurrected the program to add beluga whales and seals to recruit for military training.

The new program was performed by the Murmansk Sea Biology Research Institute, a private research body, on behalf of the navy. The purpose of the research and training program was to see whether beluga whales could be used as guards for naval bases in the arctic regions, assist deep water divers with their equipment, or even kill strangers who trespass into the naval territory.

The whale that was found harassing the Norwegian boats, however, seemed to pose no immediate threat toward the fishermen. A circulating video of the encounter showed the whale playfully opening its mouth as the fishermen reached out to pet its wet head. One fisherman went into the water to take the strap off the whale and found the Russia-related markings. 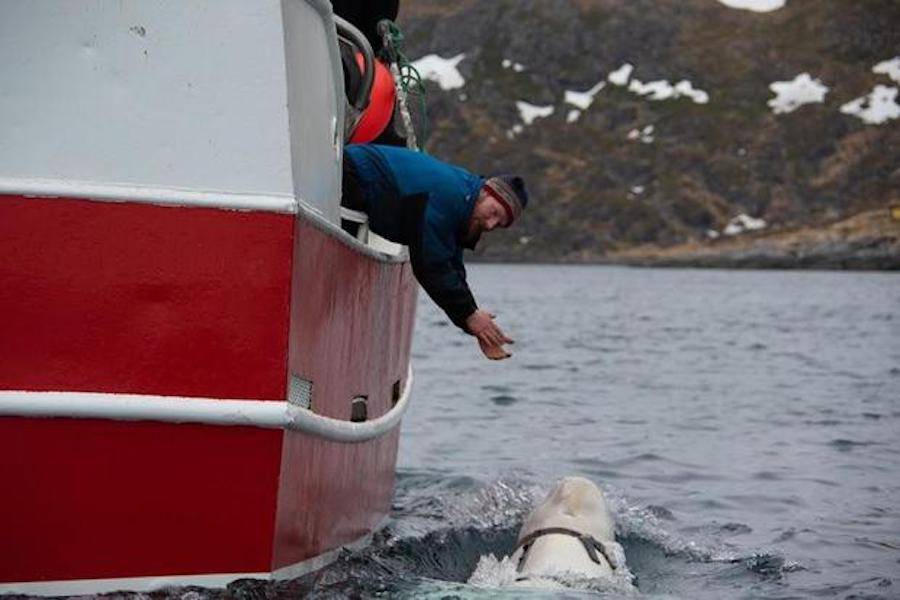 In addition to beluga whales, dolphins and seals were also trained by the Russian Navy to carry tools and detect torpedoes, mines, and other weaponry at the bottom of the sea, searching as deep as almost 400 feet below the surface.

Public records showed that the Russian Defense Ministry purchased five bottle-nosed dolphins, aged between three and five, from the Utrish Dolphinarium in Moscow back in 2016. The ministry spent £18,000 (or $US23,200) to buy the sea animals.

The theory that Russia has been using marine animals as special ops forces has been further strengthened by reports of its increased military activity by their Norwegian neighbors.

Norway and Russia share a 120-mile long border, while the Norwegian Arctic coastline is in close proximity with Russia’s northern military fleet, which comprises of naval bases, airfields and nuclear weapons storage sites.

Norwegian Joint Force Commander Lt. Gen. Rune Jakobsen told CBS News that is “not something you should do to your neighbor” in response to Russia’s continued military exercises nearby Norway. Russian President Vladimir Putin had also recently reopened three former military bases along the Arctic coastline.

Judging by the white whale’s fairly wholesome encounter with the Norwegian boats, it remains to be seen whether the Russian Navy’s investment in training sea animals to work for the military actually will pay off.

Next up, read about the tortured captive infant orcas in earth’s largest whale jail in Russia. Next, read 32 facts you didn’t know about Russia.