Stunt performer Ryan Dunn was just 34 years old when he died in a fiery car crash in 2011 — and the details were nothing short of horrific. 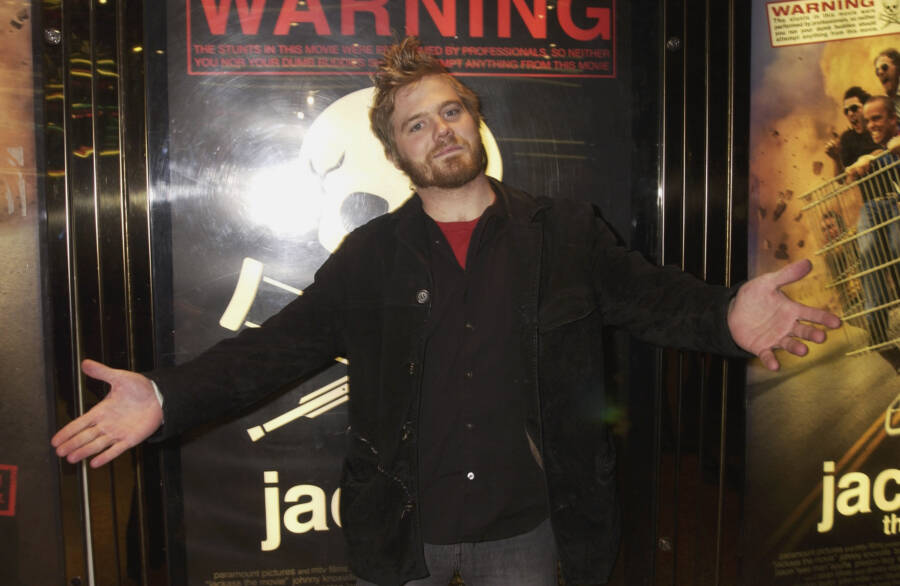 Dave Benett/Getty Images The death of Ryan Dunn cast a dark shadow over the Jackass franchise.

Around 3 a.m. on June 20, 2011, Ryan Dunn crashed his Porsche into a guardrail in West Goshen Township, Pennsylvania. His vehicle then landed in the nearby woods, where it burst into flames. Ryan Dunn did not survive the crash — and his death left countless fans in mourning.

Known for starring on the Jackass TV show, Dunn was one of the most daring stunt performers on set. A close friend of costar Bam Margera, Dunn helped popularize the nascent genre of amateur stunts and crude pranks. Margera and Dunn started releasing the infamous daredevil video series CKY in 1999, which would serve as the eventual template for Jackass.

Premiering on MTV in October 2000, Jackass became a worldwide phenomenon. Margera and Dunn were overjoyed that their mischief spurred fame and fortune. But while viewers enjoyed the brazen stunts, the camaraderie of the cast was the true heart. That changed forever in 2011.

On the night of his death, Ryan Dunn drank with abandon at Barnaby’s West Chester bar. Then, Dunn and his friend, a production assistant named Zachary Hartwell, took off in Dunn’s Porsche. At some point while on the road, Dunn accelerated to 130 miles per hour and veered off Route 322. Tragically, this move would spell the demise of both Dunn and Hartwell.

“I’ve never seen a car destroyed in an automobile accident the way this car was even before it caught on fire,” said West Goshen Police Chief Michael Carroll. “The automobile actually came apart. It was unbelievable and I’ve been on a lot of fatal accident scenes. This is by far the worst I’ve ever seen.”

This is the full, tragic story behind the life and death of Ryan Dunn

The Rise Of A “Jackass” 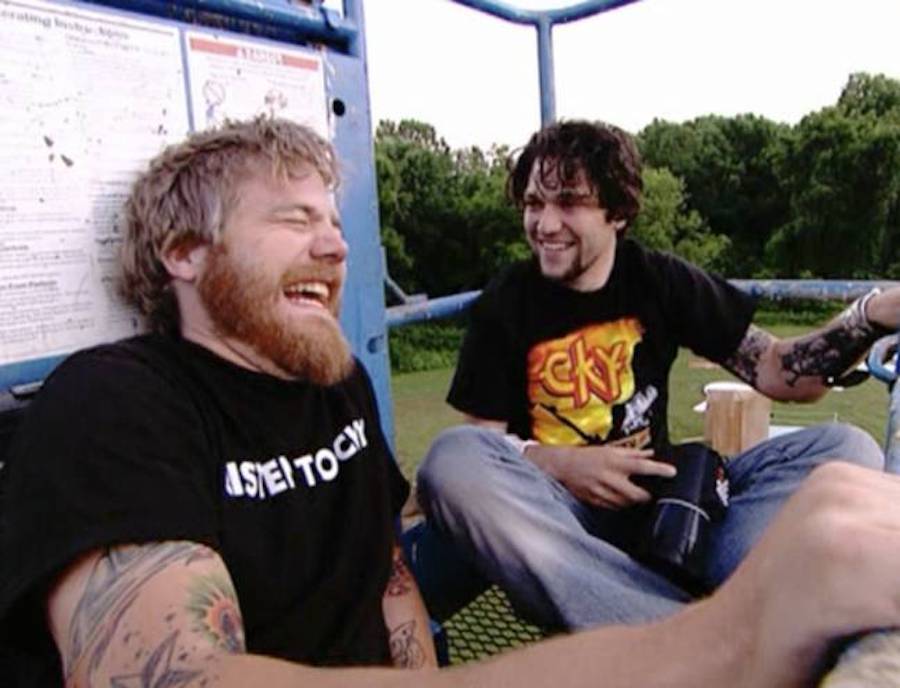 Ryan Matthew Dunn was born on June 11, 1977, in Medina, Ohio. His family soon moved to Williamsville, New York, but later settled in West Chester, Pennsylvania, just in time for high school. It was on his first day of class that Ryan Dunn met his friend and future costar Bam Margera.

The family move to West Chester was meant to curb Dunn’s burgeoning drug use, but the new town still became a proverbial playground for the 15-year-old and his wild new friend. While Margera was already a talented skateboarder and Dunn was eager to improve, they mainly recorded pranks and failed stunts that they could gleefully show to their friends.

Their growing crew of misfits eventually became locally famous after they started releasing videos under the name CKY, an acronym for “Camp Kill Yourself.” Meanwhile, Dunn also worked as a welder and at gas stations to support himself. But before long, his life would soon change overnight.

It all started when Margera’s friend Johnny Knoxville got his hands on CKY material in 2000. He wanted to use some of the footage for an upcoming project, which turned out to be the Jackass TV show. After premiering on MTV in October 2000, it attracted millions of young viewers.

But it would also pave the way for Dunn’s downfall.

Inside The Tragic Downfall And Death Of Ryan Dunn 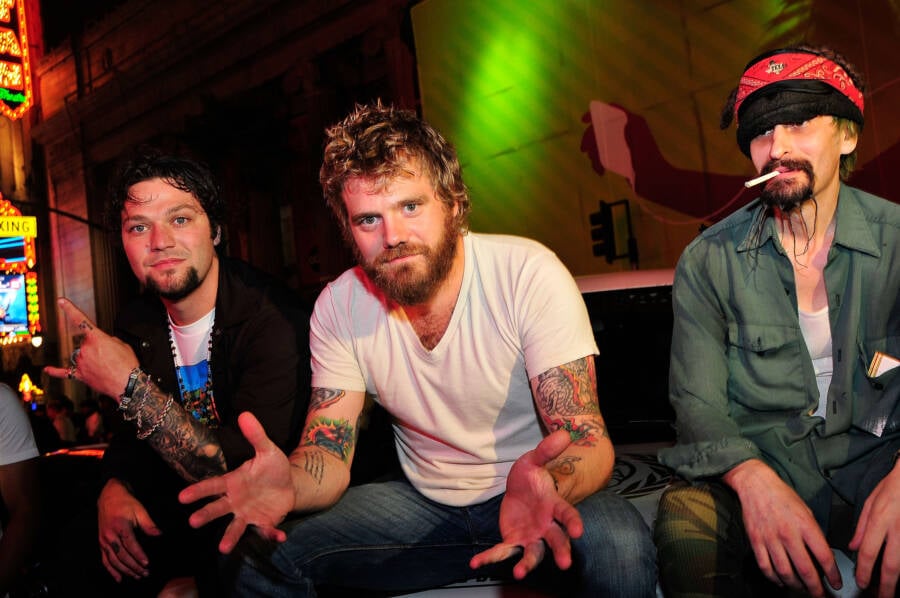 Jackass ran for about two years and led to a feature film in 2002. But as the crew became more famous, their work seemed to become more and more dangerous. As for Dunn, he was nicknamed “Random Hero” for taking on stunts that even some of his fellow costars refused to do.

Perhaps most telling, Dunn was obsessed with the power of fast cars. He once even flipped a car eight times with Margera as a passenger. Though Dunn would go on to receive 23 driving citations, 10 of which were for speeding, being a Jackass star meant that he almost never slowed down.

However, a serious injury from filming Jackass Number Two in 2006 did land Dunn in the hospital with a potentially fatal blood clot. He was also struggling with Lyme disease and depression during this time. But although he cut off contact with his friends for a couple of years, he ultimately rejoined the gang for Jackass 3D in 2010. He appeared to be happy.

But on June 20, 2011, 34-year-old Ryan Dunn fatefully got behind the wheel after a night of partying. Sources said that he may have had up to 11 drinks between the hours of 10:30 p.m. and 2:21 a.m. Some of the last photos of Dunn alive show him at Barnaby’s in seemingly good spirits with numerous fans and friends, including the 30-year-old Zachary Hartwell.

A production assistant on the second Jackass film, Hartwell was also an Iraq War veteran who had just recently gotten married. Hartwell and Dunn had been out celebrating a new deal together when tragedy struck.

Shortly after they left the bar, they were both killed when Dunn careened off the road at 130 miles per hour and smashed through a guardrail into some nearby trees. Before long, Dunn’s car was engulfed in flames.

The impact shattered the vehicle into pieces, most of which were blackened by the fire. A skid mark left behind on the road — where Dunn had tried to brake or turn — spanned 100 feet. And Dunn’s body was so badly burned by the flames that he had to be identified by his tattoos and hair.

How Did Ryan Dunn Die? 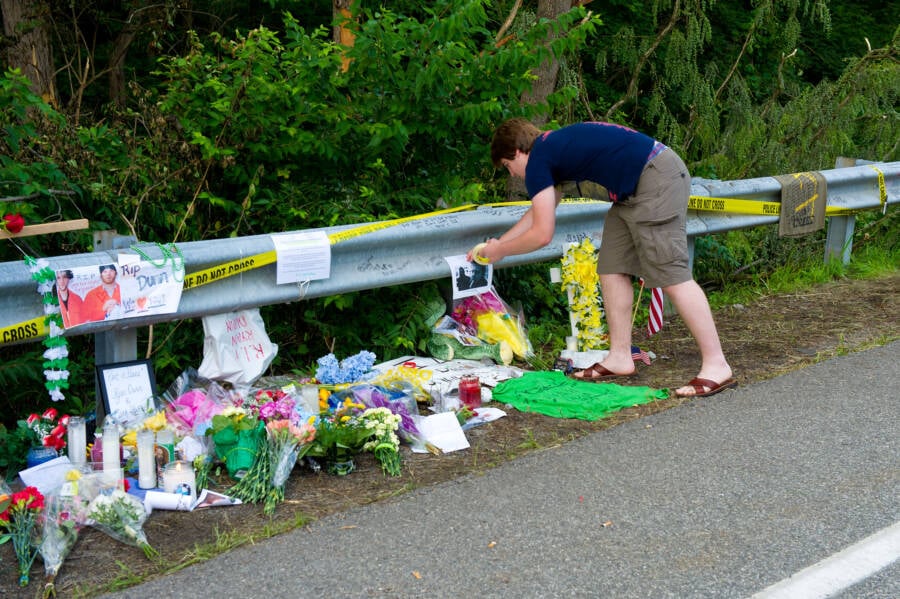 Jeff Fusco/Getty ImagesFans were heartbroken when they learned how Ryan Dunn died.

The day after Ryan Dunn’s death, Margera visited the crash site in disbelief.

“I’ve never lost anybody that I cared about. It’s my best friend,” Margera said. “He was the happiest person ever, the smartest guy. He had so much talent, and he had so many things going for him. This is not right, not right.”

To make a tragic situation even more upsetting, it was later revealed that Ryan Dunn had a blood-alcohol concentration of .196 when he died — which is more than twice the legal limit in Pennsylvania. Those closest to Ryan Dunn were shocked to hear that he was so intoxicated when he died, especially since witnesses said that he didn’t appear drunk that night.

Not even April Margera, who saw her son grow up with Dunn, wanted to accept it. “I have yelled at him for lots of things but he was not a big drinker and he was always responsible as far as I know, so I cannot believe he would do that,” she said. “I am sick because it is a waste, sick because I loved him, sick because he was talented, and sick because he is gone.”

Tragically, the cause of death for Ryan Dunn — and also Zachary Hartwell — was listed as both blunt force trauma and thermal trauma. It remains unclear whether the two men died immediately on impact — or suffered unspeakable pain as they slowly perished in the raging fire.

After learning about Ryan Dunn’s death, read about James Dean’s death. Then, check out 9 famous deaths that shocked Hollywood.