How Did James Dean Die? Inside The Accident That Killed The Beloved Actor

James Dean's brief yet iconic time in the spotlight came to an abrupt end when he died in a tragic car accident on September 30, 1955 — and the details of his death remain both perplexing and disturbing to this day.

James Dean was one of those rare stars whose persona became more famous than any of his films — and yet he would only live to see one of those films released.

It seemed that just as James Dean’s stardom was on the rise, it had been extinguished. He was just 24-years-old when he died, and indeed, James Dean’s death — however eerie and ill-timed — only cemented his place as a cultural icon. 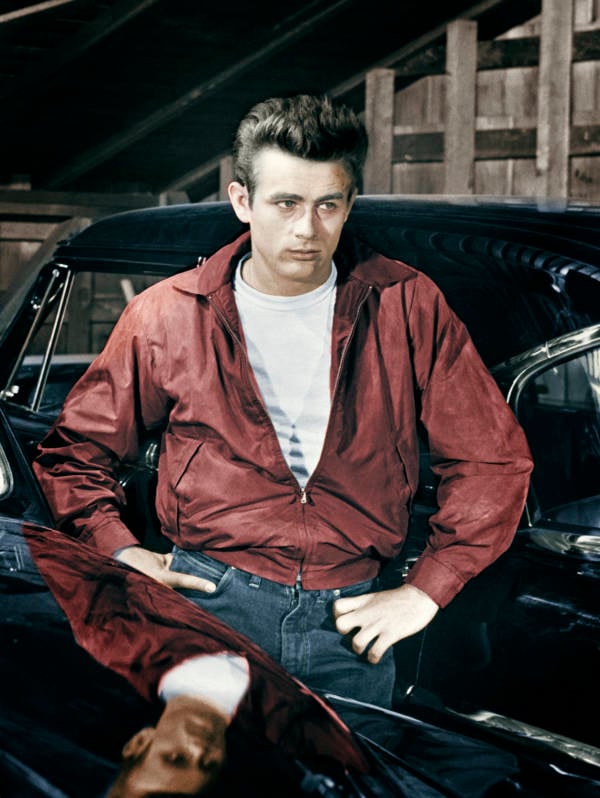 Bettmann/Getty ImagesJames Dean as Jim Stark in the 1955 motion picture Rebel Without a Cause.

His Early Life And Passion For Racing

James Byron Dean was born in Indiana on February 8, 1931, where he lived for a few years before his father’s work had the small family transferred to California. His mother died when he was nine years old.

Dean seemed to always exude artfulness and talent. He played the violin, he tap-danced, and he sculpted. In a statement to his high school principal, Dean expressed what would become one of his most iconic facets: motorcycle:

“My hobby, or what I do in my spare time, is motorcycle. I know a lot about them mechanically, and I love to ride. I have been in a few races and have done well.”

Dean later enrolled at the Junior College of the University of California in 1949 but dropped out at the suggestion of his drama teacher to pursue a career in New York.

After a couple of years doing bit parts and commercials, James Dean moved to New York to study under the famous acting director Lee Strasberg in 1951. Over the next few years, he developed his signature (and at the time unconventional) acting technique and landed parts in several television shows and Broadway plays.

His big break finally came in 1955 when he was cast in East of Eden, the adaptation of John Steinbeck’s 1952 novel. Dean’s largely-improvised performance and his quintessential representation of the restless American youth in the ’50s was widely praised and his path to stardom seemed set.

His meteoric rise to fame could not have predicted James Dean’s death — as sudden and horrific as it was.

Although he had been working acting jobs fairly steadily throughout his twenties, James Dean had never abandoned his other lifelong passion: car racing. The same year East of Eden premiered, Dean participated in both the Palms Springs Road Races and the Santa Barbara Road Races. He had also purchased a brand new Porsche Spyder, which he nicknamed “Little Bastard” and planned to drive in the Salinas Road Race in California. 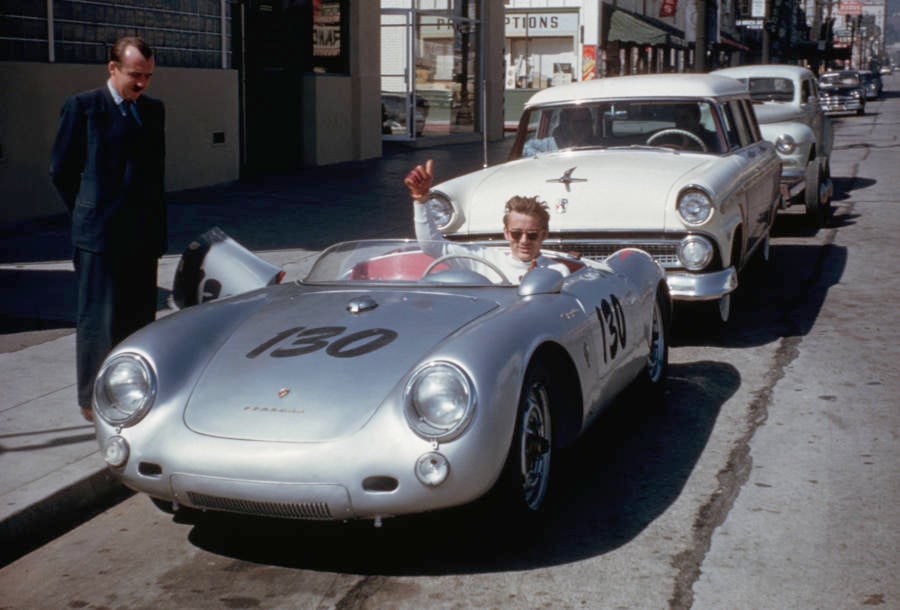 Bettman/Getty ImagesActor James Dean gives a thumbs-up sign from his Porsche 550 Spyder, the Little Bastard, while parked on Vine Street in Hollywood.

Dean had initially thought to have the Porsche taken to Salinas on a trailer, but at the last minute decided to drive it himself.

On September 30, 1955, the Hollywood star set off for Salinas in Little Bastard, accompanied by his mechanic, Rolf Wütherich. Dean was stopped for a speeding ticket around 3:30 P.M., ate at a diner around 4:45 P.M., then hit the road again. At around 5:45 P.M., Dean noticed a Ford heading towards his car that was preparing to make a left turn at the junction ahead. After Dean supposedly reassured Wütherich, “that guy’s gotta stop, he’ll see us,” the two cars collided head-on.

Wütherich was catapulted from the car and suffered several broken bones.

The Ford was spun down the highway before it came to a stop and its driver, 23-year-old Donald Turnupseed, escaped with only minor injuries.

As for the Porsche, upon impact, it spun in the air before crashing back down to the earth with a sickening crunch and rolling to the side of the road, all the while with James Dean still inside. 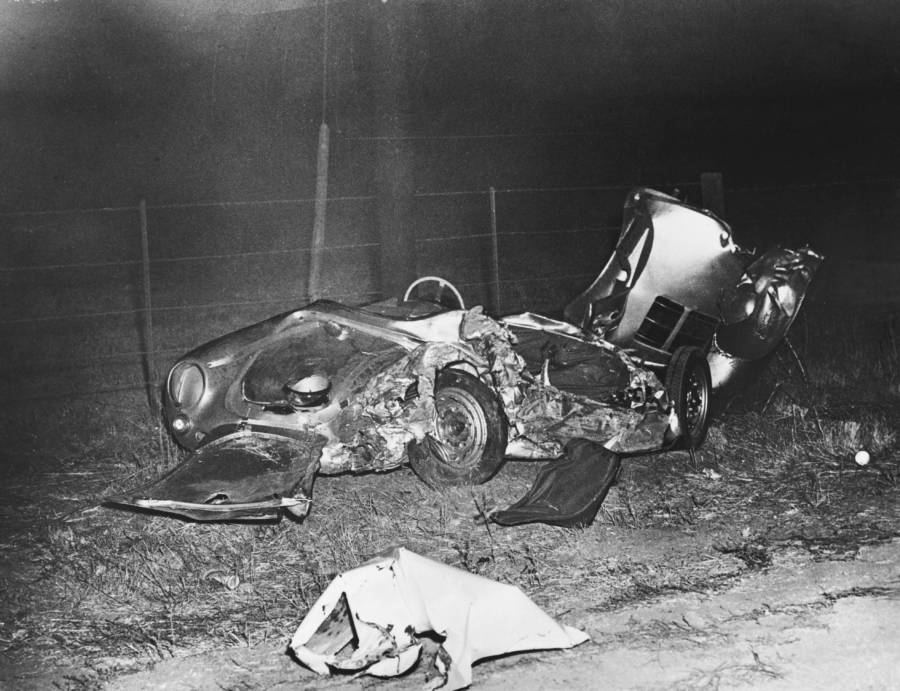 Witnesses rushed to free him from the crushed metal carcass but were horrified to see how mangled the crash had made him. It’s still unknown why exactly the crash happened; Turnupseed was never charged and eyewitnesses claim Dean had not been speeding despite his previous ticket. Regardless of the circumstances, James Dean was pronounced dead upon arrival at Paso Robles War Memorial Hospital shortly after 6 PM.

The Curse Of Little Bastard

James Dean’s death only served to solidify his legend and establish his status as a rebellious icon with unseen, perhaps dark, depths.

There was another legend that quickly sprang up around James Dean’s death, this one regarding his beloved Porsche. Fans were quick to point out that Dean had previously filmed a PSA for safe driving, cautioning viewers to “take it easy driving, the life you might save might be mine.” This coincidence on its own was eerie enough, but soon strange incidents were also being reported concerning Little Bastard. 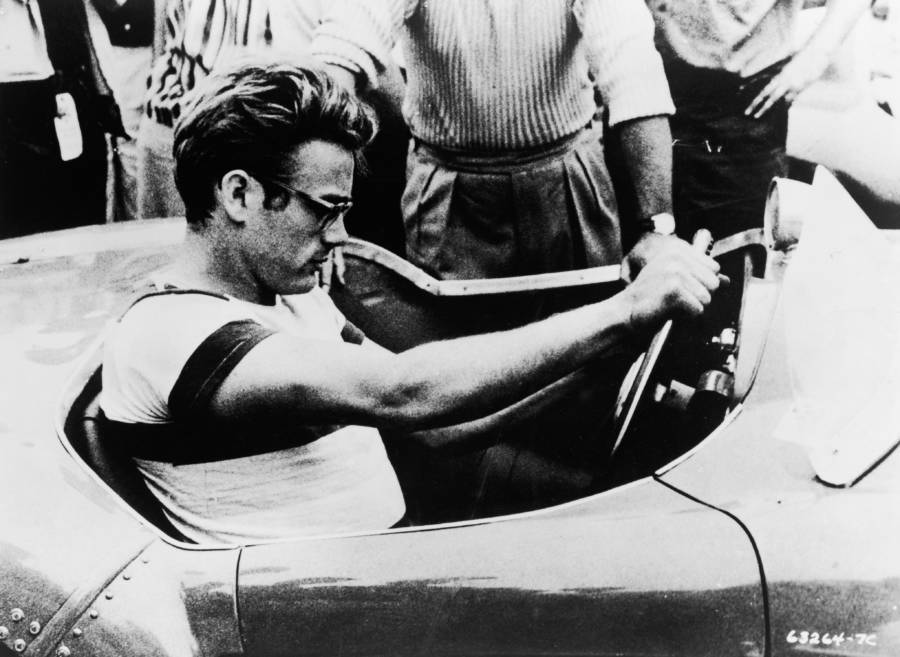 Photo by Warner Bros. courtesy of Getty ImagesJames Dean sits behind the wheel of a sportscar in a still from the documentary movie The James Dean Story.

Although the car itself had been totaled, some of its parts were able to be salvaged and sold off individually. But strange things happened to those people who bought them. The engine was sold to a doctor who was killed in a crash the first time he used it. Another driver was injured when two tires he had purchased from the car blew out simultaneously. The driver of the truck transporting the shell skid off the road and was killed.

Many of the incidents related to the “curse” following James Dean’s death are almost impossible to corroborate (since the individual parts of the Porsche are hard to trace) but there are a couple of eerie coincidences that cannot be so easily dismissed.

One such instance comes firsthand from none other than Sir Alec Guinness himself, who, in a 1977 interview told the strange story of his first and only meeting with James Dean.

The British actor bumped into the American rebel one night in Hollywood the same year of James Dean’s death and Dean proudly showed off his newly purchased Porsche. He declared that it could go up to 150 MPH, although admitting he had not yet even been inside the car.

The bizarre moment passed and Dean shrugged off the warning. Guinness continued that the two went on to have a “charming dinner and he was dead the following Thursday afternoon.”

People still visit the crash site of James Dean’s death and leave tributes that have included alcohol and women’s underwear.

After this look at the story of James Dean’s death, read about some more strange celebrity deaths. Then, check out how Hollywood’s biggest star stood trial for murder. Finally, read all about Bruce Lee’s death.