The Ryugyong Hotel has been called "the worst building in the world" and the "Hotel of Doom." 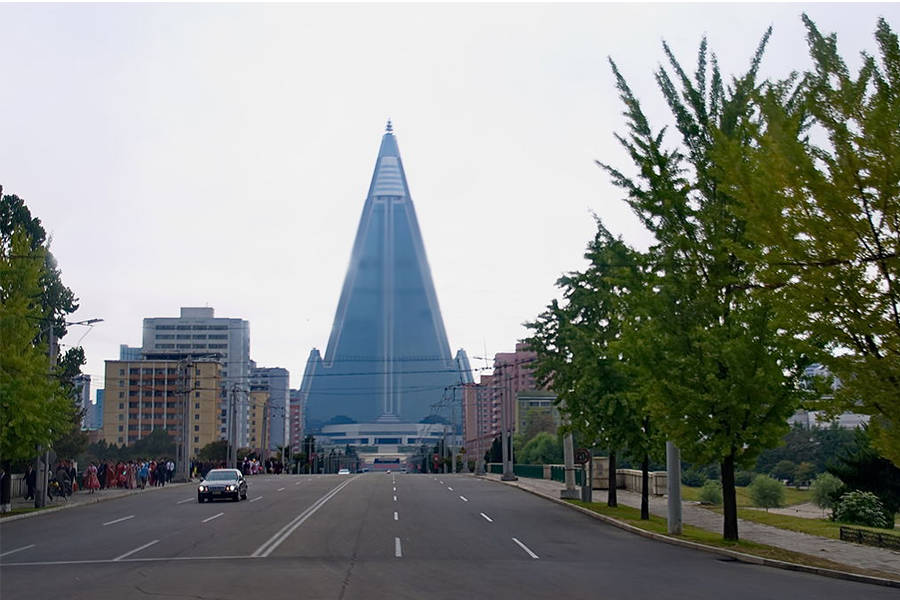 Wikimedia CommonsThe Ryugyong Hotel in 2013, after construction was halted for the second time.

Rising above the skyline of Pyongyang stands the Ryugyong Hotel. More than twice the height of the Great Pyramids, this pyramid of glass stands as a testament to the accomplishments and failures of the modern-day pharaohs of North Korea.

Construction on the mysterious “Hotel of Doom” began in 1987 under the direction of Kim Il-sung, the Eternal President of the Republic. The Westin Stamford Hotel in Singapore had just been completed and named the world’s tallest hotel. Seoul, South Korea, had also just announced their plans for the Olympics Opening Ceremonies, to take place in 1988.

In response, Kim Il-sung directed the Ryugyong Hotel be built as a snub to his southern neighbors and to rival that of everything that had been built before it. Publicized to be the tallest building in the world, the largest hotel ever built, and the grandest piece of architecture that the world had ever seen, the hotel quickly fell short of all expectations.

For the first few years, all went as planned. At 1,080 feet tall, the hotel was to have 105 floors and 3,000 rooms, topped with a 14-floor cone at its pinnacle. The cone was to revolve and contain restaurants, shops, and ballrooms spread throughout its floors. The hotel was to be a mecca for businessmen and international travelers alike, one of the few amenities that North Korea had to offer those who traveled from the outside world. 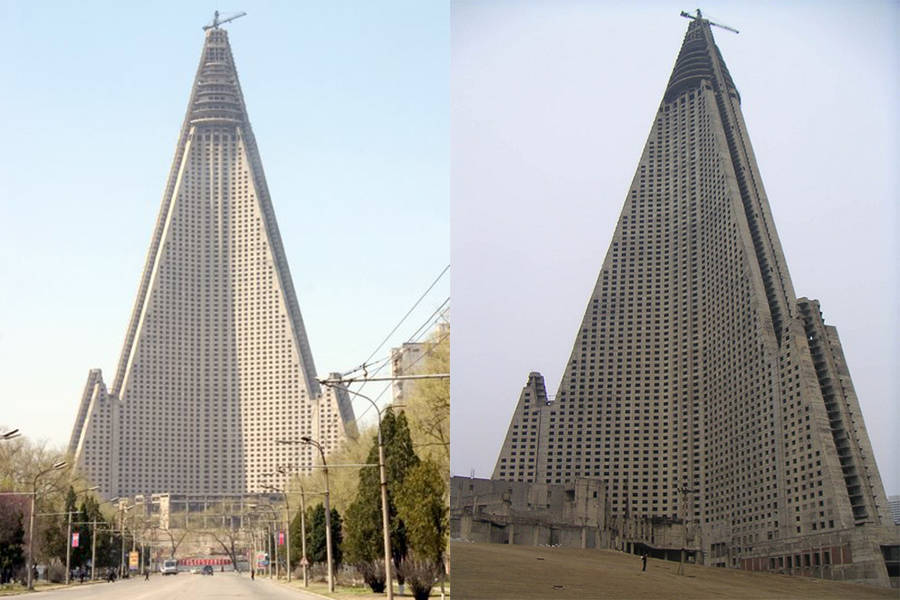 Wikimedia CommonsThe Ryugyong Hotel in 2003, after construction was halted for the first time.

The shell of the building was completed on schedule, a white concrete pyramid rising above the city. Whether by design or ironic accident, the structure was built in the exact shape and size of the Ministry of Truth from George Orwell‘s 1984. In the novel, the ministry serves a propaganda machine, responsible for falsifying historical events to benefit the government.

In the beginning, the project was backed by the Soviet Union, as was the rest of the country. Without the help of the Soviets, the hotel would never have broken ground as the original construction cost a whopping $750 million, almost two percent of the country’s gross domestic product. Upon the collapse of the USSR, North Korea fell into an economic depression, halting the construction of everything. Without the funding, the country was thrown into turmoil.

The hotel was left unfinished with the scaffolding still standing around its base for almost a decade. While the facade was finished, an impressive white tower reaching 330 meters into the sky, the inside remained empty.

As the years dragged on, rumors began to swirl about the massive, expensive, unfinished structure. The building that had been touted as North Korea’s gift to the world was now a sign of their failure and a massive scar on their face of the power. Before long, the media dubbed the Ryugyong Hotel the “Hotel of Doom,” and “the worst building in the world.”

In 2008, 16 years after construction had been halted, it picked up again as if nothing had happened. An Egyptian company that had entered into a deal with North Korea to build a mobile phone network had mysteriously agreed to complete the Ryugyong Hotel. North Korean officials announced that the hotel would be completed quickly with a new opening date of 2012, in honor of the 100th anniversary of Kim Il-sung’s birth. 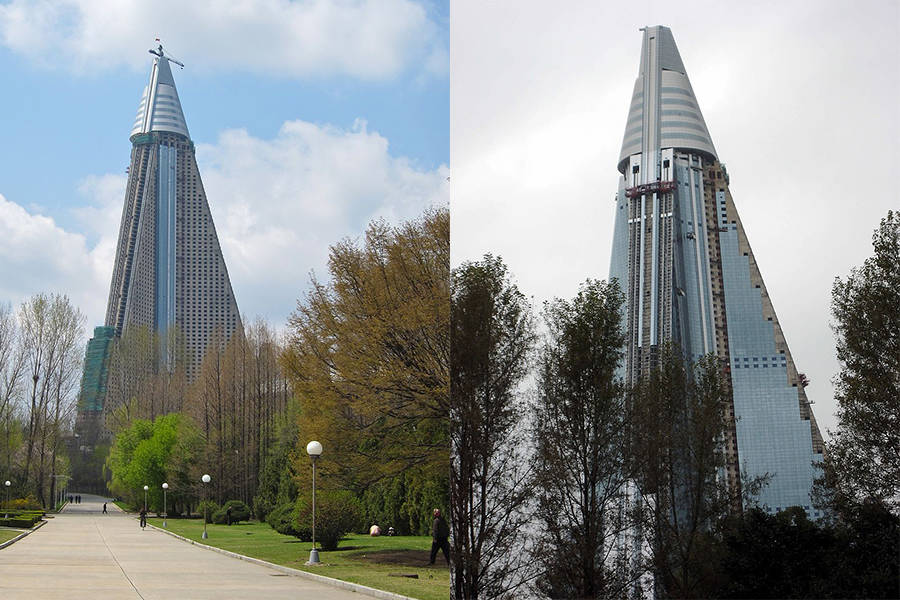 Wikimedia CommonsThe Ryugyong Hotel as the glass panels were being added to the outside.

As the world watched from afar, dazzling glass panels were added to the outside of the structure and telecommunications antennas were attached to the top. Several vague photographs were released of the interior, showing unremarkable bare concrete walls, few fixtures, and almost no furnishings.

As the opening date drew nearer, international hotel operator Kempinski announced that it would be taking over the hotel’s management. The company was famous for their worldwide roster of five-star hotels, complete with the finest luxury amenities that money could buy. Their hotel in Azerbaijan has its own bowling alley and ice skating rink, while their resort on the Red Sea has a private coral reef for scuba diving.

However, on the heels of Kempinski’s announcement, construction was again mysteriously halted. The 2012 opening was pushed to 2013, then downgraded to a partial opening, then finally canceled altogether. Kempinski rapidly amended their statement, claiming that they had never signed onto the project and that they had actually only been discussed in their initial discussions.

For the next four years, the site remained abandoned, with large “no trespassing” signs and armed guards at the entrances. In late 2017, signs of work appeared at the site as new scaffolding seemed to materialize out of nowhere and sudden construction on entry roads began. However, so far, no official announcement has been made.

To this day the Ryugyong Hotel is the tallest unoccupied building in the world and the 63rd tallest building overall. Rumors still swirl about the construction, including that the total number of rooms has been downgraded to 1,500 from 3,000, and that the building will house office space and apartments in addition to hotel rooms.

Despite the rest of the world’s opinions, the reaction from North Koreans about the lavish spending on such a structure has been effectively nonexistent. As with everything they experience.

After learning about Ryugyong Hotel, check out these photos of what life is like inside North Korea. Then, take a look at the way North Korean propaganda depicts Americans.