The Tacoma Narrows Bridge swung and swung until it couldn't swing anymore.

Never has a suspended bridge caused so much suspense.

The Tacoma Narrows Bridge in Washington was the third largest suspended bridge ever built after the Golden Gate Bridge and the George Washington Bridge. That is until it plummeted into the Puget Sound.

Construction on the bridge started in September of 1938. Clark Eldridge was the Project Engineer. At a cost of $6.4 million dollars, it took just 19 months to build. Since only light traffic was expected, and in order to save money, one of the principle engineers made the Tacoma Narrows Bridge with just two lanes and a narrow 39 feet wide. The plate girders were eight feet deep, so they didn’t provide much in terms of extra depth. Essentially, the thing was a massive swing.

Construction workers were already well aware of the bridge’s tendency to sway in windy conditions. Even before it opened they had lightheartedly given it the nickname “Galloping Gertie.”

Since they were aware of the bridge’s structural instability, workers tried several tactics to make it more secure. They attached cables, which were anchored to blocks of concrete on the shoreline, to the bridge’s plate girders. But the cables snapped almost immediately.

They tried installing four hydraulic jacks at the towers of the bridge to act as buffers absorbing the shock. But no noticeable results came of it.

Still, the bridge officially opened to the public on July 1, 1940.

There were oscillations from wind since the start, but a serious collapse wasn’t a consideration. Tourists and locals actually enjoyed going to the bridge and walking across it as it swung back and forth in the wind.

Then the fateful day came. It was around 11 a.m. on Nov. 7, 1940. Winds were blowing at 42 mph, which isn’t that strong, but it set the bridge into a rhythmic sway which increased with each swing. As one newscaster reporting from the scene at the time put it, it’s impossible to imagine unless you see it with your own eyes. 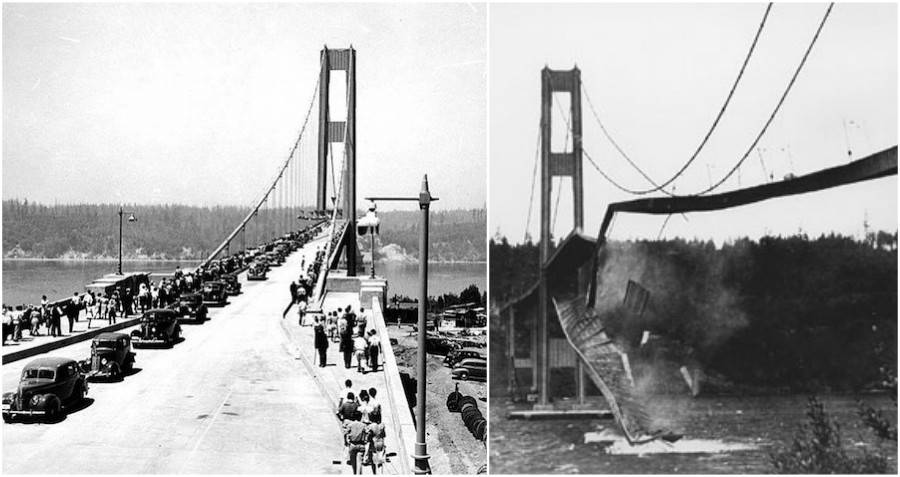 University of Washington Libraries/Wikimedia CommonsTacoma Narrows Bridge on opening day July 1, 1940 and its collapse on November 7, 1940.

As it continued to sway more and more vertically, the vibrational energy became more than the cables could withstand. Eventually, they gave way. The 11 thousand ton Tacoma Narrows Bridge had been open for just four months when it collapsed, plunging into the water below.

Miraculously, the only casualty was a dog who was sadly trapped in a car stranded on the bridge. There was a rescue attempt but the terrified dog would not move.

The dog belonged to Leonard Coatsworth, the last person to drive over the bridge. The dog was his daughter’s cocker spaniel, Tubby.

“The tilt became so violent that I lost control of the car,” Coatsworth said afterward. “I jammed on the brakes and got out, only to be thrown onto my face against the curb.”

Coatsworth attempted to go back to the car to get Tubby but was thrown before he reached it. That’s when he realized the bridge was breaking up. “On hands and knees most of the time, I crawled 500 yards or more to the towers,” he said.

Nearing the toll plaza, he risked getting up and running the rest of the way. “Safely back at the toll plaza, I saw the bridge in its final collapse and saw my car plunge into the Narrows.”

While Coatsworth was the last person to drive over the bridge, he wasn’t the last person to be on it. F.B. “Bert” Farquharson was a professor of Engineering at the University of Washington and as he stated in his eyewitness account, “I was the only person on the Narrows Bridge when it collapsed.” 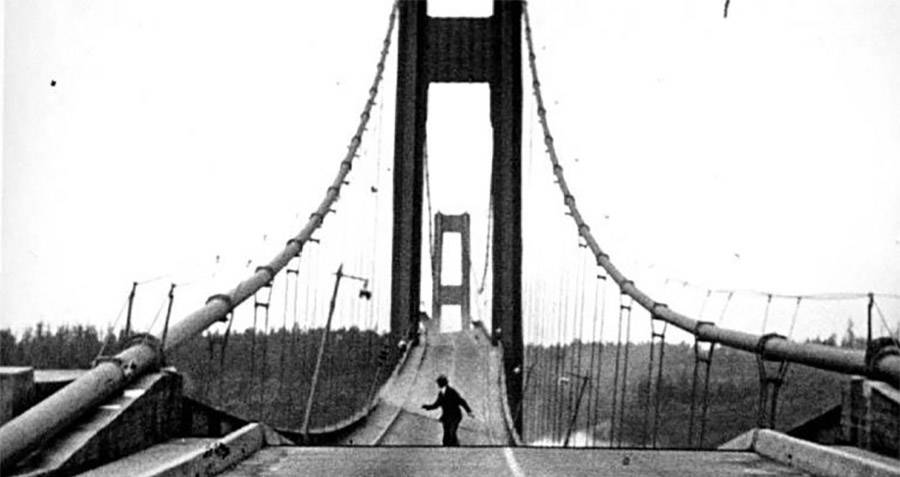 As he had heard there was trouble with the bridge, he came with Eldridge to check out the scene. He said despite the situation “I thought she would be able to fight it out.”

That obviously wasn’t the case. The portion of the bridge Farquharson was on had already dropped 30 feet when the tension was released. He fell and broke his camera but, “kneeled on the roadway and stayed to complete the picture.”

In the aftermath of the Tacoma Narrows Bridge collapse, the State of Washington was unable to collect on one of the insurance policies for the bridge because its insurance agent had fraudulently pocketed the insurance premiums.

Meanwhile, engineers were divided as the to what the cause of the disaster was.

Washington state, the insurance companies, and the United States government appointed boards of experts to investigate the collapse of the Narrows Bridge.

From construction to collapse, they compiled a detailed report on the incident titled “THE FAILURE OF THE TACOMA NARROWS BRIDGE” that was more than 130 pages long. The Carmody Board stated that the collapse was a result of, “forced vibration excited by random action of turbulent wind.”

This was eventually given a more technical name called aeroelastic flutter; instability due to an interaction between aerodynamic, inertial, and elastic forces.

The Tacoma Narrows Bridge collapse was pivotal in how future structures would be built, with the careful incorporation of aerodynamics into design plans.

The portion of the bridge that fell into the water now serves as an artificial reef. A new Tacoma Bridge was built in 1950, consisting of a wider roadway and features designed to secure the bridge more firmly during wind storms.

But the Tacoma Narrows Bridge collapse stayed with Eldridge. He’s quoted as saying, “I go over the Tacoma bridge frequently and always with an ache in my heart. It was my bridge.”

Enjoy this look at the Tacoma Narrows Bridge collapse? Next, check out these photos of Californians celebrating the Golden Gate Bridge’s grand opening. Then look at these dramatic photos of The Empire State Building plane crash.