Santa Muerte: The Saint Of Death That The Vatican Tried To Shut Down

Her worshippers vary from those pushed to the fringes of society to occultists, drug lords, and prisoners – and the Santa Muerte has garnered more followers in the past decade than any religion before it. 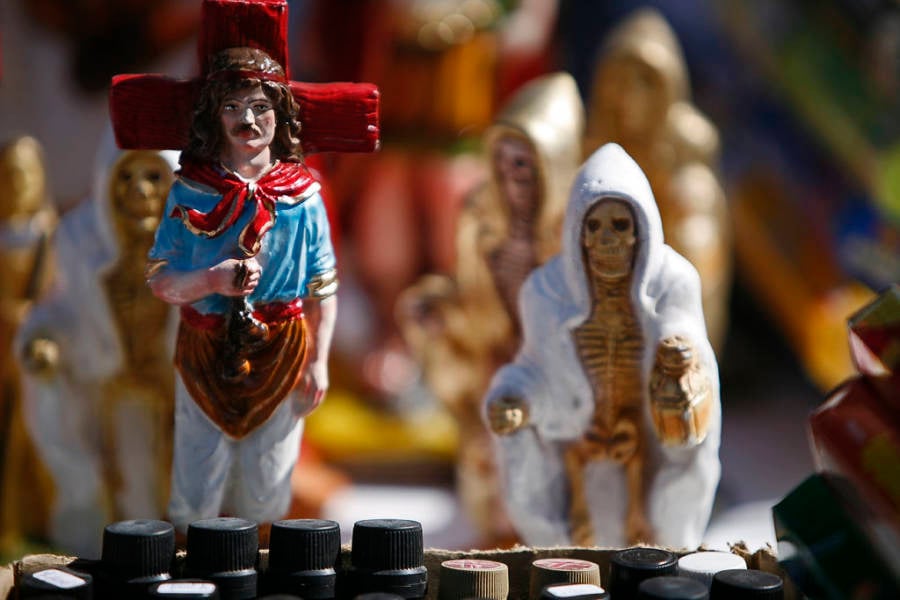 Wikimedia CommonsCatholics who pray to Santa Muerte find it easy to reconcile their two belief systems.

Santa Muerte, the folklorish female deity of Mexican-American culture, has gone from relative anonymity to being at the center of the fastest growing religious movement in the world. Her followers, from drug lords and prisoners to hard-working families, often call her Santisima Muerte — “most holy death.”

The highest annals of the Catholic Church, the Vatican itself, has condemned Santa Muerte as satanic. But this hasn’t stopped her worshippers from every corner of the earth to bowing at her altar.

The History Of Santa Muerte

Although she has only become a popular figure in the last 10 to 15 years, Santa Muerte (literally translated as “Saint Death”) has been around for centuries.

Andrew Chesnut, the Bishop Walter F. Sullivan Chair in Catholic Studies at Virginia Commonwealth University, relays that references to Santa Muerte begin as early as colonial Spain. As the Spaniards sought to turn the Aztecs and Mayans over to Catholicism, they introduced them to female Grim Reaper figures as a representation of death. But these native cultures already had death deities. 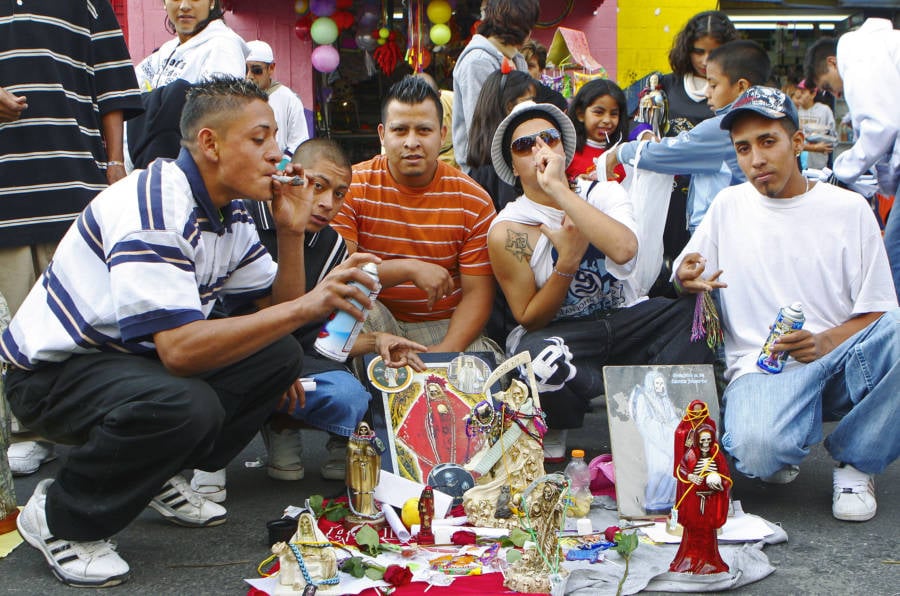 Jam Media/LatinContent/Getty ImagesMen stand next to a makeshift altar honoring the Santa Muerte as part of Day of the Dead celebrations at the Tepito district on Nov. 1, 2009 in Mexico City.

Before the arrival of the Spanish conquistadors, the Aztecs who inhabited the area that is now central Mexico worshiped Mictecacihuatl, the “Lady of the Dead.” This pre-Columbian death goddess ruled over the underworld and was often depicted as a partial skeleton or having a skull for a head, similar to Santa Muerte.

It’s no coincidence that the modern “Bony Lady,” as her followers sometimes refer to her, is often depicted holding a scythe. Catholic missionaries brought figures of the Grim Reaper to the new world them as their own embodiment of death and its possible the figures of the reaper and Mictecacihuatl blended together to become Santa Muerte.

And so, as was the case with the spread of Catholicism all over the globe, the new religion from Rome did not entirely uproot and replace the beliefs of the local populations but rather blended with them. Some theories posit that Santa Muerte is also the result of one of these religious mixtures.

Conflict seems to also be an ingrained aspect of the death saint’s history as well. As long ago as the Spanish Inquisition, inquisitors recorded destroying a shrine dedicated to her in Central Mexico. 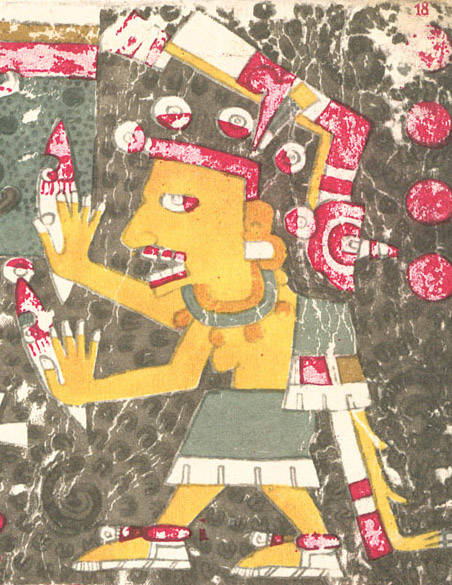 Santa Muerte largely disappeared from written history until well into the 20th century. Although there are a few references to her from the 1940s to 1980s, it wasn’t until the start of the drug wars in Mexico that Santa Muerte’s popularity really began to take off.

The first modern shrine to Santa Muerte was opened in the Mexico City barrio of Tepito in 2001. Over the next dozen years, the sect which worshipped the skeletal figure would gain between 10 to 12 million followers across Mexico, Central America, and the United States, making it the fastest-growing religious movement in the world.

The Saint Of Death’s Worshippers

Santa Muerte’s rise in popularity has coincided with the rising death toll from the drug wars in Mexico over the last 15 years. It’s very possible that the two events are not unrelated, since, as one priest explains, “a lot of devotees who feel like death could be just around the corner – maybe they’re narcos, maybe they work in the street, maybe they’re security guards who might be gunned down – they ask Santa Muerte for protection.”

The Bony Lady has actually gained something of a reputation as a “narco-saint,” a patron for the drug lords who so often deal in death themselves. The men who make up some of the worst elements of Mexico’s criminal underworld are some of the saint’s strongest devotees. For narcos and thugs attempting to reconcile their lifestyles with their religion, Santa Muerte is the perfect object of their devotion. 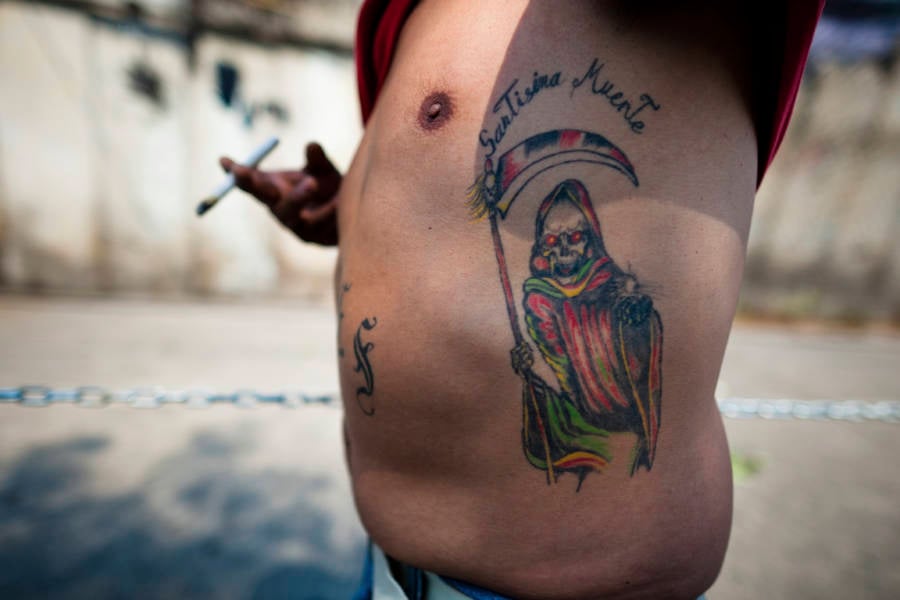 Jan Sochor/Latincontent/Getty ImagesA Mexican follower of Santa Muerte shows his tattoo during the pilgrimage in Tepito, a rough neighborhood of Mexico City.

Catholicism so heavily ingrained in the Mexican culture that even the most hardened criminals might be a bit uneasy invoking one of the traditional saints for help with illegal activities.

It isn’t just criminals and narcos who are turning to Santa Muerte for help, however. She has also found adherents among residents of Mexico’s poorest communities, single mothers, and homosexuals: people who have found themselves on the fringes of society and feel overlooked by the church.

“[un]like the Catholic Church or the evangelical church, Death doesn’t discriminate. She takes all comers,” further explains Chesnut, author of the first significant English-language book on the Santa Muerte phenomenon. 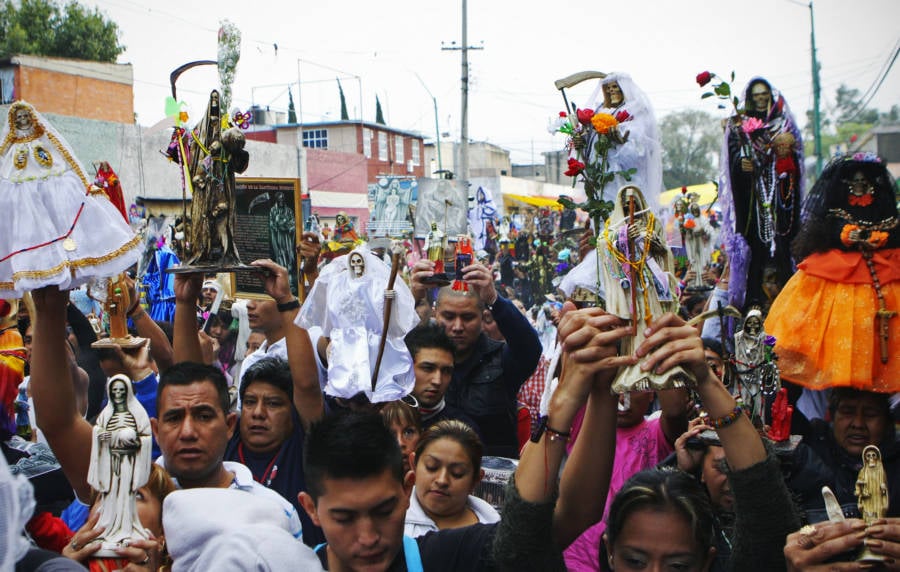 Jam Media/LatinContent/Getty Images)Devotees hold figurines of Santa Muerte as they parade in the deity’s anniversary, part of the Day of the Dead celebrations in Mexico City.

Condemnation By Both Church And State

Despite the fact that many of the people who pray to Santa Muerte are also Catholics, the sect has one very powerful and vocal enemy: the Vatican.

Catholic Church officials have repeatedly denounced the worship of Santa Muerte and claim that the beliefs that fuel her followers directly contradict the teachings of the church. Santa Muerte is considered by the Church as a “folk saint.” She is not seen as an official saint because the Catholic Church has not canonized her for having lived a holy life as the figure is simply the personification of death.

Italian Cardinal Gianfranco Ravasi declared that the worship of the Bony Lady “is the celebration of devastation and of hell.” For Catholics, death was the last enemy who was defeated by Christ and so to pray to a personification of death rather than to one of Christ is considered a perversion of the faith. 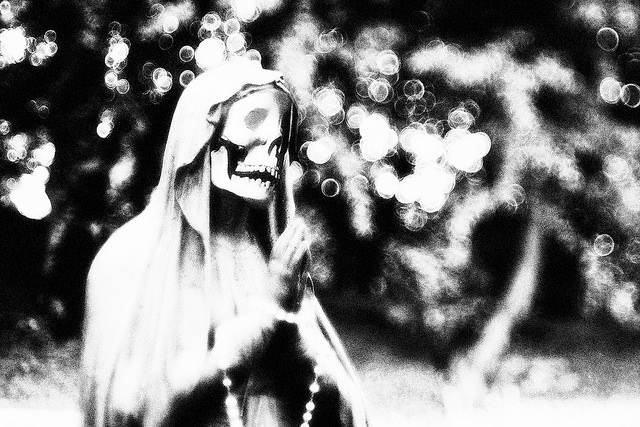 Flickr CommonsSometimes Santa Muerte is depicted in the garb of a traditional saint, or even the Madonna, a comparison the Church vehemently condemns.

Santa Muerte’s association with the criminal underworld also led to her being officially condemned by the Mexican government. President Felipe Calderon declared Santa Muerte an “enemy of the Mexican State” and, in a move that would have been familiar to the Inquisitors of the colonial era, ordered the army to bulldoze dozens of her shrines in 2012.

Murder And Mayhem In The Saint’s Name

For some, the threat Santa Muerte poses goes far beyond ignorance of Catholic dogma. Father Gutierrez explains that “(Santa Muerte) is literally a demon with another name…I have had a number of people who have come to me as users of this practice and found themselves tied to a demon or demonic tribe.”

For others, Santa Muerte presents a danger that is more physical than spiritual. In 2012, Mexican police arrested Silvia Meraz in connection with a series of murders that spanned three years.

Meraz and her followers allegedly sacrificed three people, including a ten-year-old boy, at an altar of Santa Muerte. Prosecutors claimed “They sliced open the victims’ veins and, while they were still alive, they waited for them to bleed to death and collected the blood in a container” which they then poured around an idol of the skeleton saint.

Although most people who worship Santa Muerte do not take things to this extreme, the incident has only fueled more warnings from the Catholic Church about the dangers of glorifying death.

After this look at Santa Muerte, read about the murderous Mexican drug lord who sacrificed his victims in the name of the occult. Then, look at some photos that capture the devastation of the Mexican drug wars.