Sawney Bean, one of the most terrifying figures in English folklore, may actually just be a product of anti-Scot propaganda.

The story of the treacherous Sawney Bean, who may or may not have even existed, has gone on to reach legendary status in his native Scotland.

Believed to have lived in a cave with about 50 immediate family members, all born of incest, the Beans were known for robbing, kidnapping, and eventually murdering strangers whom they later dismembered and ate. Over the course of 25 bloodlusty years, the Beans are said to have cannibalized 1,000 people.

The grisly tale is also believed to be the true story behind The Hills Have Eyes, the terrifying cult horror classic. But is the legend of Sawney Bean even real? 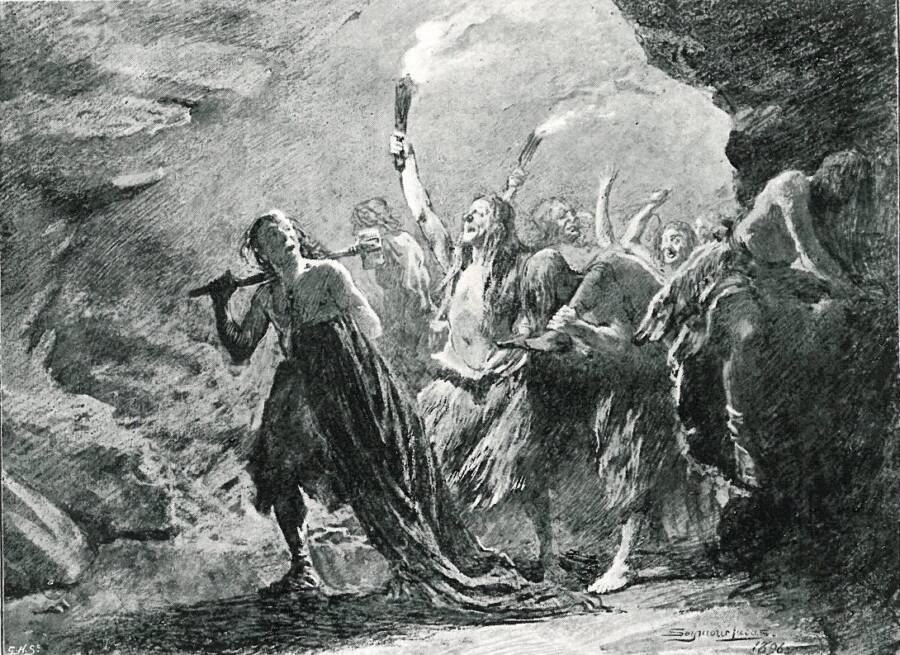 Public DomainThe grisly crimes of Sawney Bean and his cannibalistic brood are believed to have inspired The Hills Have Eyes.

The man known as Alexander Sawney Bean was supposedly born in the late 1600s near Edinburgh, Scotland, though very little is actually known about his early life. According to Scottish historian Dr. Louise Yeoman, Bean’s story might actually begin at the turn of the 17th century, though he does not appear in the historical record until nearly a century later in 1755.

Yeoman adds that Bean is also placed in the 15th century, during the reign of James I of Scotland, though that King James may have been conflated with King James VI who ruled Scotland at the turn of the 17th century.

But no matter what time period in which Sawney Bean may reside, he is always viewed as a merciless barbarian. 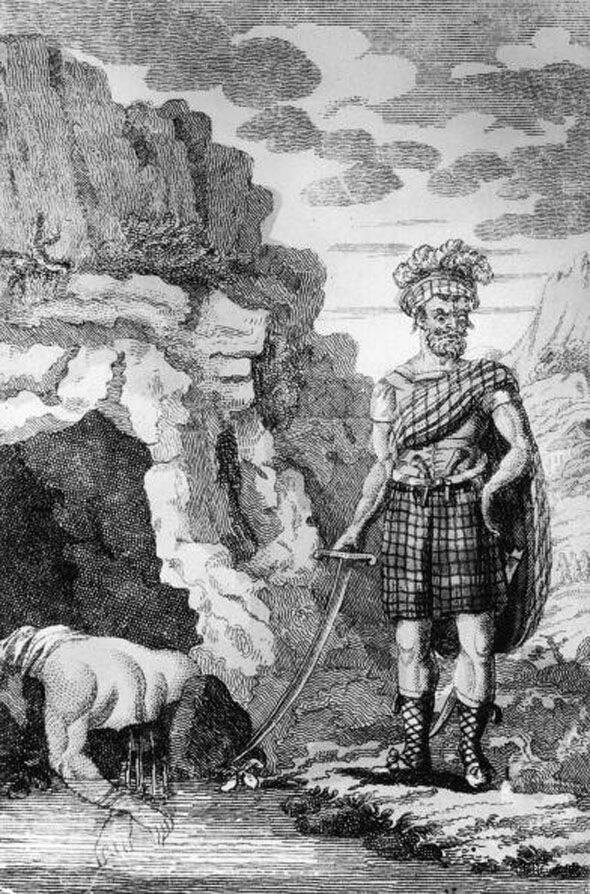 Public DomainSawney Bean keeps watch over his cave of horrors.

Bean might also have originally been a tanner by trade, others say that he was first a hedger and a ditcher. Nevertheless, most accounts agree that Bean eventually left these trades behind and took up with a woman, sometimes called Black Agnes Douglas, in Ayrshire.

The legend goes that the Beans retreated from society and confined themselves in a cave over the sea. Now called Bennane Cave, the hideaway was said to become hidden when the tide rose high enough.

This giant rock formation was allegedly equipped with various tunnels that spanned over a mile in depth and allowed ample space for the young couple to start and raise a hideous family. 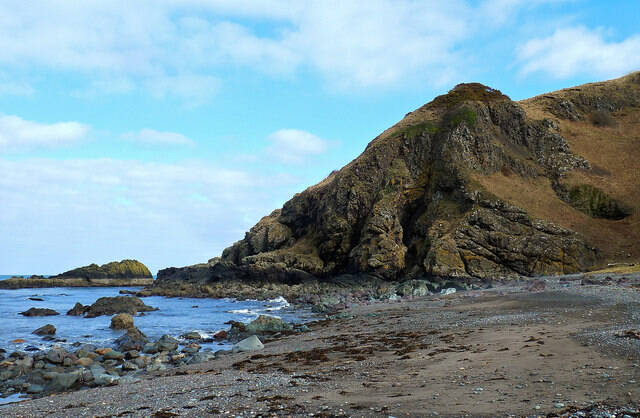 Mary and Angus Hogg/Public DomainBennane Cave, where Bean and his brood were said to live.

The Bean clan grew quickly, with Sawney Bean’s wife eventually giving birth to 14 kids. With ever-increasing mouths to feed and no real trade to fall back on, Bean turned to robbery and murder to make ends meet. And it didn’t take long for his family to help him with his crimes.

The Beans Develop A Taste For Flesh

The Beans worked together to ambush lone travelers and local passersby and were consequently left with a mountain of bodies to dispose of. As the legend goes, this is how the Beans ultimately turned to cannibalism.

The criminal clan was said to hack up the bodies of their victims, quarter them, and pickle them in their cave.

As time went on, the family continued to grow. The cave eventually became home to 18 grandsons, and 14 granddaughters — all born out of incest. The Bean clan eventually numbered 45 — and all of them had a hankering for human flesh.

With what was essentially a small army to help him, Sawney Bean went on to orchestrate ambushes with military precision, tracking and pouncing upon their victims before dragging their lifeless bodies back to the cave to be consumed. 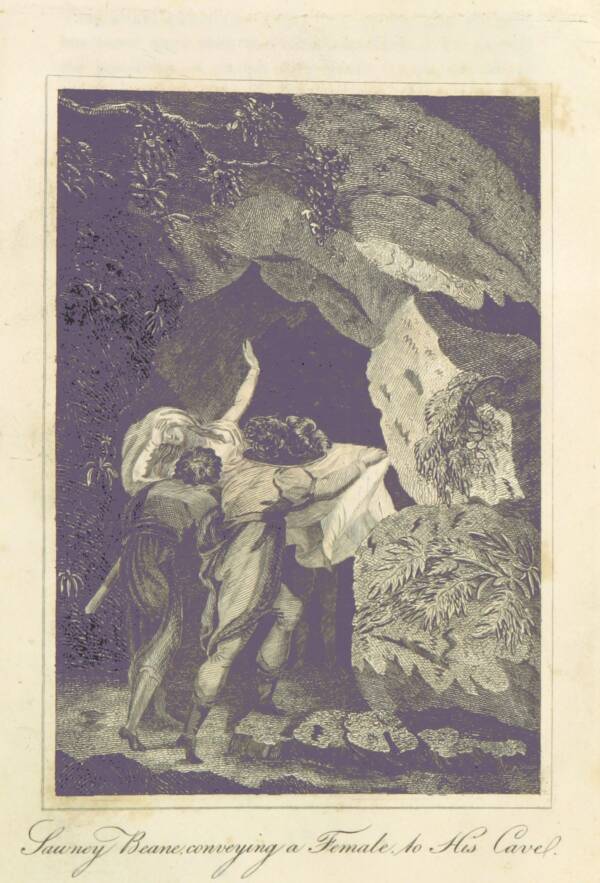 British Library/FlickrHistorians posit that the story of Sawney Bean was just that — a story — and one that was meant to denigrate the Scots.

A list of missing persons grew by the day and occasionally limbs would wash ashore, but the Beans, hidden from society, went undetected.

Instead, local innkeepers became suspects as they were usually the last people to have seen the missing person in question. Many inn keepers grew fearful of being wrongly accused and several of them abandoned their inns for other occupations entirely.

But the Beans’ reign of terror was not to last.

One day, the Beans encircled a husband and wife on horseback as they returned from a local fair. The Beans ambushed the couple from behind and took the woman down immediately, gutting her and gnashing on her entrails.

Her husband, who witnessed the horror, fought the Beans hard. He barreled over several of them with his horse and pulled out both a sword and a pistol until he was released from their grip.

By this time, a group of about 30 fellow fair-goers had made their way along the same path, and when the Beans took notice of them, they retreated — though not before exposing themselves as the cannibalistic, cave-dwelling murderers that they were. 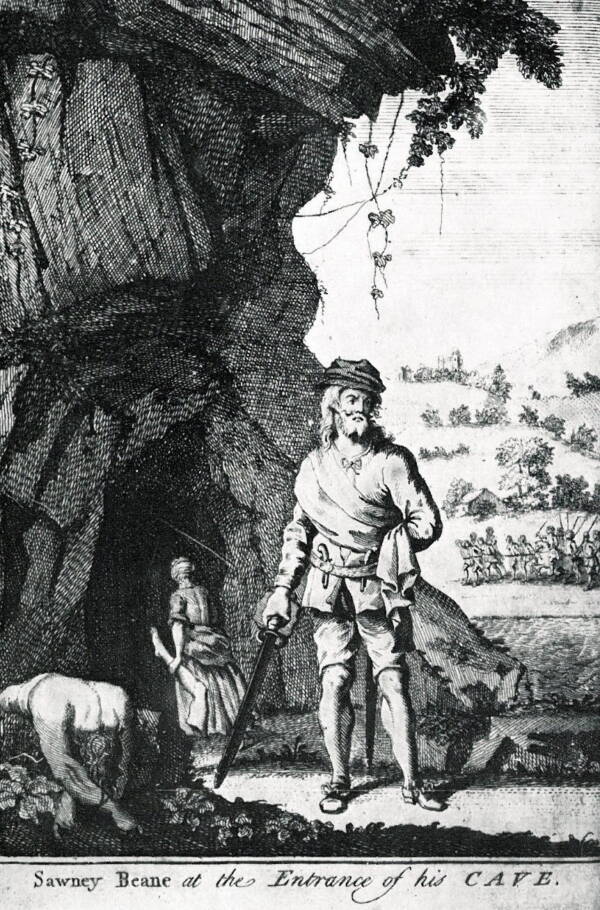 Pubic DomainAnother depiction of Bean, this time in more clothing, as his wife drags off the legs of their latest victim.

Meanwhile, the husband made his way to Glasgow, where he implored King James VI to do something about the Beans. The king is said to then have personally led a mob of 400 men. The king’s bloodhounds led the charge to Bennane Cave, where they were met with an unfathomable scene of carnage, severed limbs, hanging bodies, and piles of stolen loot.

Captured without incident, the Beans were arrested and taken to Leith, Scotland, where they awaited execution.

The locals were said to have been so disgusted with the Bean family that they demanded a more painful punishment than mere death. As a result, 21 of the Bean women were burned to death. The men were dismembered and left to bleed out.

Many historians contend that the horrific story of Sawney Bean is likely just that — a story. 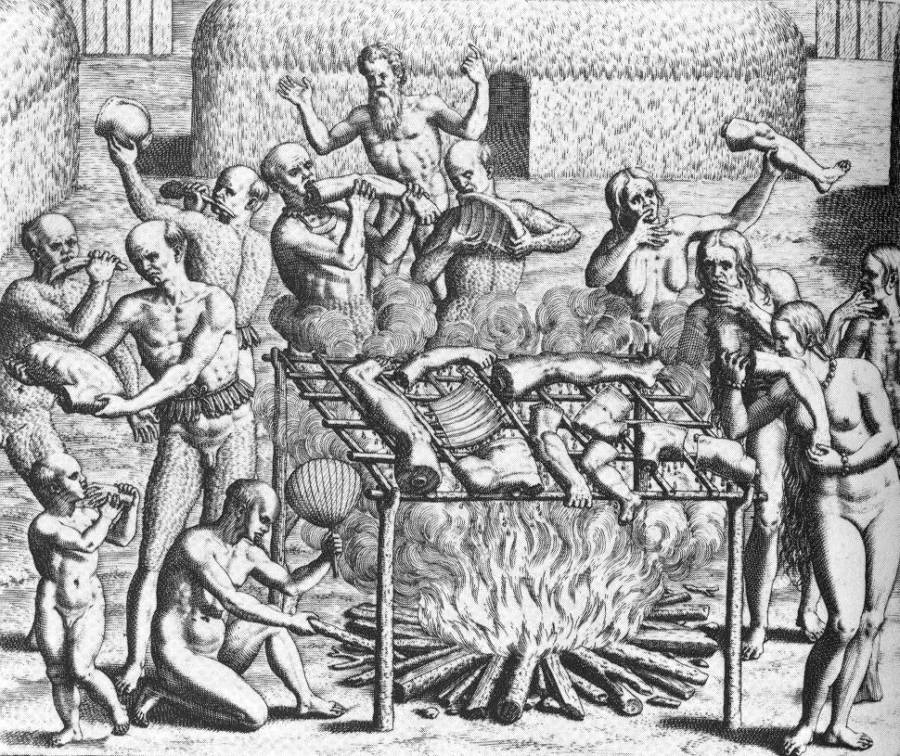 Wikimedia CommonsIn an effort to defame the Scots, it’s believed the English began rumors that they were savages.

Besides a story of Bean from 1755, there are no contemporary records to verify his existence. There are also no records of the missing persons, the various innkeepers forced to abandon their trades, or even the 400-person manhunt led by the King of Scotland himself. Indeed, Yeoman asserted that if the king had led a charge to dispose of a family of cannibalistic Scots hiding in a cave, there most certainly would be a record of it.

So where did this legend originate? Some historians, including Yeoman, contend that it was simply an English propaganda tool.

“It sounds like the plot for a box-office-topping horror film and that’s because it was invented to serve a very similar purpose – to sell books,” Yeoman said. “It also has a more sinister subtext – the books it sold were published not in Scotland but in England, at a time when there was widespread prejudice against Scots.”

Yeoman said that the English media often portrayed the Scottish as sinister barbarians during the late 17th and early 18th centuries because the Scots were trying to reinstate one of their own on the British throne. In an effort to disenfranchise their cause, such stories were passed along. And the name “Sawney” was actually a term used to describe a cartoonish Scottish character.

“It’s like calling a cartoon Irishman Paddy. The Sawney story was a dig at Scots – a people so barbarous they could produce a monster like Sawney, who lived in a cave and ate people.”

The True Story Of The Hills Have Eyes

The legend of Sawney Bean is said to be the true story of The Hills Have Eyes.

The gruesome story of Sawney Bean, whether true or not, would nonetheless go on to inspire media for years to come. As it turns out, Sawney Bean is even behind the true story of The Hills Have Eyes, a horror cult classic.

The grisly film centers around a family who has become stranded in the Nevada desert and are subsequently hunted and terrorized by a group of inbred mutants who live in the nearby mountains. In the movie, just as in the story of Sawney Bean, this terrifying brood of cannibals preys on unsuspecting travelers, murdering, eating, and pickling them in their house of horrors.

The film was directed by writer and filmmaker Wes Craven and released in 1977 to terrified audiences. According to Craven, The Hills Have Eyes, “Came form an article I saw in the New York library about the Sawney Beane [sic] Family.”

Craven’s version of the tale of Sawney Bean, as might be expected with any legend, is slightly different from the usual canon. According to Craven, “In the 1700s in Scotland I believe, there was an area that had road running through it from Scotland, and people thought it was haunted because people kept disappearing from that road.”

Craven was privy to the part of the Bean tale in which one man managed to escape the cannibals’ onslaught and alert the king. But Craven also found a surprising nugget of irony in the tale. After the king and his angry mob find the Bean family, “The [authorities] did the most excruciating things to them. I responded to the irony of it, of people who should be nice and civilized doing horrible things. And horrible people having a nice side to them, too.”

Whether the Bean family had any sort of “nice side” is certainly not clear from the legends, but perhaps Craven is justified in trying to find a silver lining to this otherwise harrowing tale.

After learning about Sawney Bean and the true story of “The Hills Have Eyes,” learn about another terrifying myth — that of Slender Man. Then, check out another legendary group of Scots known as the the Picts, the ancient blue-colored wild men who helped defend Scotland from the Romans.