Slenderman was a popular internet legend created in June 2009. But when two 12-year-olds tried stabbing their friend to death, this mythical creature took on a life of its own.

At first, Slender Man was just an internet meme. But then, it became a frightening folktale whispered among American youths. And before long, the Slender Man legend inspired a few of these young people to kill.

But how did a fictional character created on the internet cause so much violence? And why did he become so popular in the first place? Let’s take a look inside the real Slender Man story and where it all began.

The Online Origins Of Slender Man 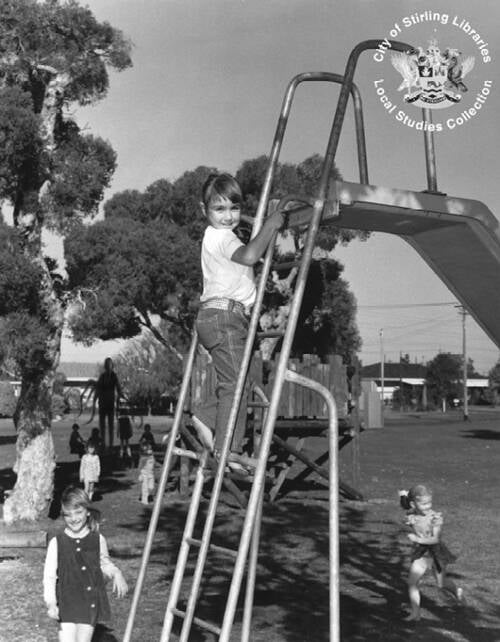 Eric Knudsen/DeviantArtThe story of Slender Man began as one man’s contribution to an online Photoshop challenge — and quickly went viral.

On June 10, 2009, Slender Man was born out of a Photoshop contest on an internet forum. The challenge, which was posted on the comedy website Something Awful, encouraged people to take regular photographs and make them look scary by adding realistic ghosts, ghouls, or monsters.

Eric Knudsen, who went by the username Victor Surge, responded to the call by creating Slender Man. A ghostly figure with a featureless face, this character was creepy enough to make the photos go viral.

“It was pretty spontaneous,” Knudsen told an interviewer in 2011. “I saw some of the pictures in the thread and just decided to make something that I myself would find creepy.”

Inspired by the “surreal imaginings” of H.P. Lovecraft, Stephen King, William S. Burroughs, and a host of folklore creatures, Knudsen took some old black-and-white pictures of children playing and inserted a tall, thin, grainy figure in the background. In one image, he added tentacles to the figure’s back.

One of his photos also featured a cryptic caption that added to its creepy allure. It read, “We didn’t want to go, we didn’t want to kill them, but its persistent silence and outstretched arms horrified and comforted us at the same time … 1983, photographer unknown, presumed dead.”

Knudsen never could’ve imagined how many people would be inspired by his character — or that some would take their enthusiasm too far.

The Making Of The Slenderman Legend 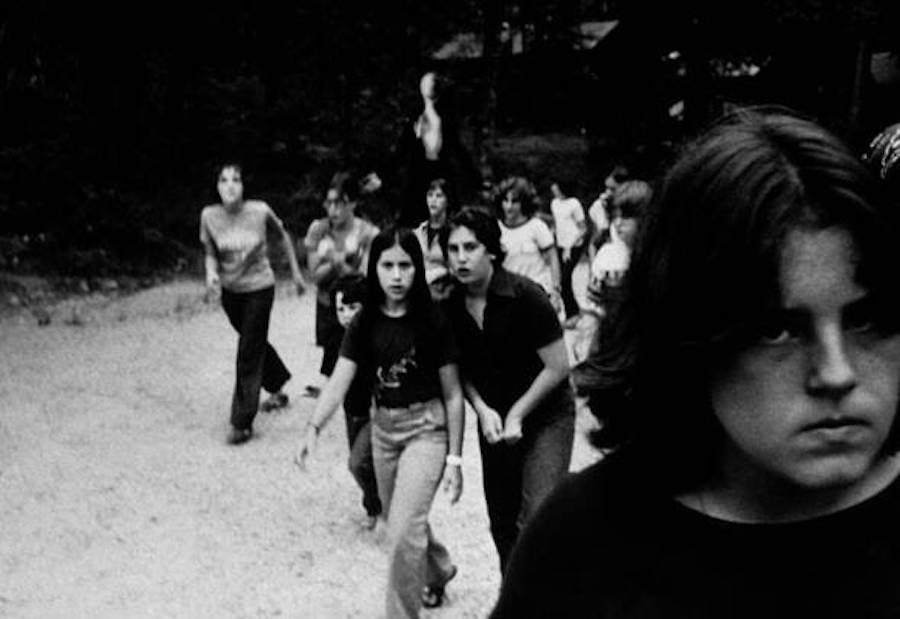 While Knudsen gave Slender Man his name and physique, the Slender Man legend was the communal, home-grown creation of a slew of internet users.

“If you want to study the life cycle of a meme from a random internet post to a fully realized, culturally known concept,” noted Carli Velocci for The Verge, “you can’t get much better than Slender Man.”

On June 20, 2009, just 10 days after Knudsen’s posts, the YouTube channel Marble Hornets premiered. The channel featured a Blair Witch Project-style found footage series about a film student being stalked by a figure known as “The Operator” — which appeared to have been inspired by Slender Man.

Produced by three film students from Alabama, Marble Hornets quickly began to garner fans on YouTube. Joseph DeLage, Tim Sutton, and Troy Wagner shot the nearly 90-episode series with practically no budget — and it ran for five years. And it still boasts more than 500,000 subscribers.

Other Slender Man-inspired videos and video games soon followed, appearing on websites with hundreds of thousands of visitors. In these depictions, Slender Man was always a tall, faceless figure with a dark suit and long arms, who usually had tentacles on his back. But fans soon filled in the blanks of the mythos with their own ideas as to what he did and why.

“The ‘open source’ nature of it — a wide-ranging canon with lots of gaps to fill in around a fairly well-defined spine — helped a lot, I think,” said Cat Vincent, a Slender Man enthusiast. 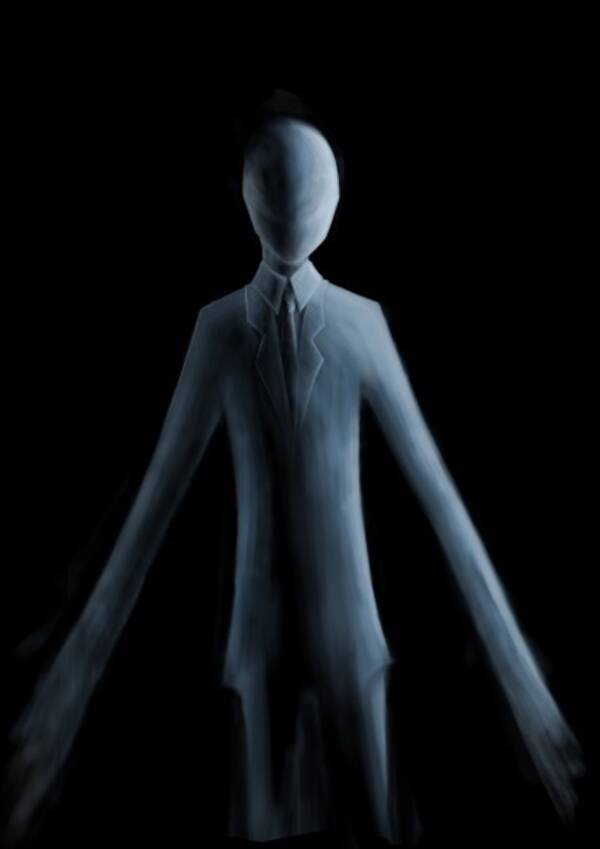 Wikimedia CommonsThe vague nature of Slender Man allowed many artists to get creative with their interpretations.

Users posited that he preyed on children, beckoning them into the woods and inviting them to kill in order to be initiated into his “proxy.” His modes and motives were always left ambiguous. But in many ways, it was scarier not knowing any of the specific details about his backstory.

“Before you had angels and succubi, and then ghosts and spirits, today we have shadow people and inter-dimensional beings,” said Knudsen. “The Slender Man, and other newly created entities, are just the newest addition in the progression of a long, and very real, human tradition.”

Slender Man was a classic example of a “creepypasta” — a modern horror legend that makes the rounds on the internet after several people copy and paste it around the web. But many believe that this creepypasta reached its peak popularity in 2012. After that, it began to peter off.

What had once been the collective labor of love by a close-knit family of anonymous internet users soon became a commodity.

In 2013, the first-person horror video game, Slender: The Arrival, premiered as the commercial successor to the free-to-play indie game, Slender: The Eight Pages. The story of Slender Man was now for sale — tarnishing its home-grown appeal and disappointing many of its early fans.

But this disappointment was nothing compared to the real-life panic that ensued after a 2014 stabbing — which was inspired by Slender Man.

Inside The Slender Man Stabbing 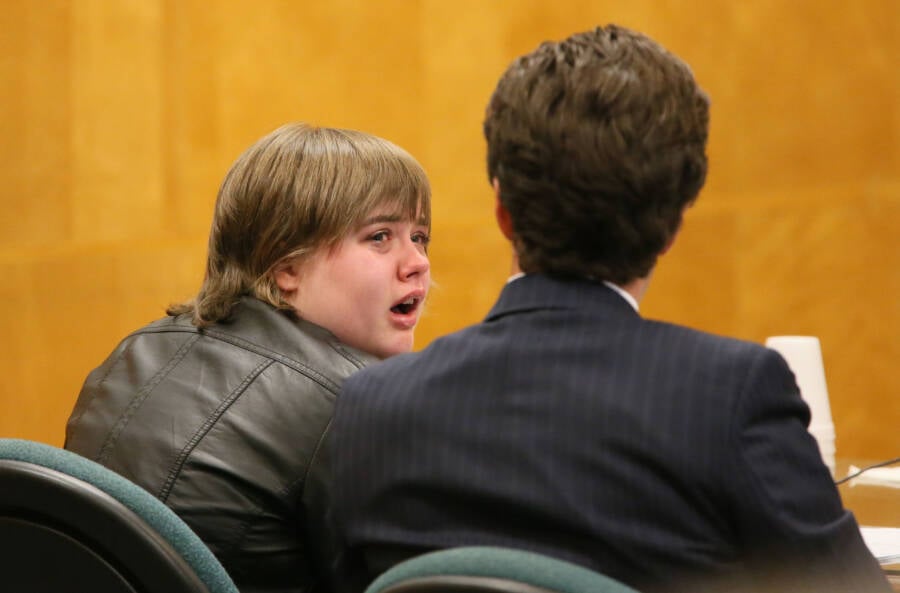 Michael Sears/Milwaukee Journal Sentinel/TNS/Getty ImagesMorgan Geyser explains how she stabbed Payton Leutner for Slenderman during her trial on October 5, 2017, in Wisconsin.

On May 30, 2014, three 12-year-old girls had a slumber party in Waukesha, Wisconsin, a suburb of Milwaukee. The next morning, one of the girls nearly bled to death after she was stabbed 19 times with a kitchen knife in the middle of the woods. Horrifically, her two “friends” that she’d spent the night with were the ones responsible for the brutal crime.

Bleeding from her arms, legs, and torso, Payton Leutner managed to drag herself to a path, where a cyclist found her and called 911.

“My body was working so hard to keep itself alive,” she later recalled. “It was probably like, ‘Vision isn’t really a priority right now.'”

The perpetrators, Morgan Geyser and Anissa Weier, were arrested soon after authorities found Leutner bleeding on the side of the road on May 31, 2014. Police interrogated them that same day. Geyser and Weier soon admitted to the cops that they had been planning the attack for months. They also revealed their disturbing motive: to please the Slender Man.

Geyser also said that Leutner was her “best friend since fourth grade.” As it turned out, the three girls had just gone rollerskating the night before for Geyser’s birthday. But as early as December 2013, Geyser had begun plotting how she and Weier could become Slender Man’s “proxies” and join him in his mansion in the woods — and they saw Leutner as their ticket.

“Morgan said, ‘Hey Anissa we should be proxies.’ I was like, ‘Okay, how would we do that?'” Weier told the police. That’s when Geyser told her about her plan to stab Leutner — and Weier enthusiastically agreed. 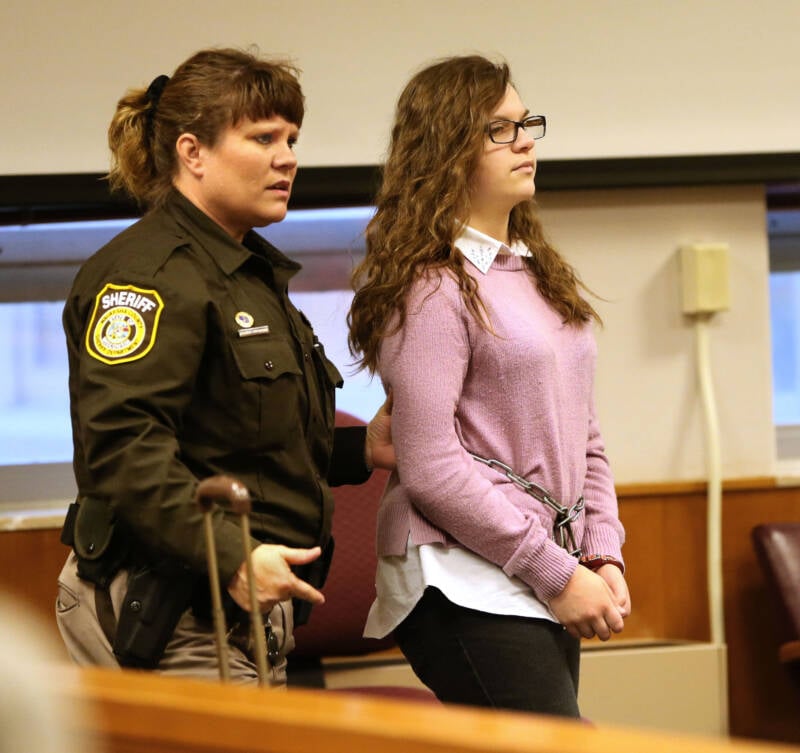 “I was excited because I wanted proof that he existed because there were a bunch of skeptics out there saying he didn’t exist,” Weier said. “Morgan and I were going to be like lionesses chasing down a zebra. I was going to tackle her and then Morgan was going to do the stabbing.”

The state of Wisconsin decided to try the two adolescents as adults, but Geyser was soon diagnosed with schizophrenia (just like her father had been 10 years prior). And in 2017, a jury found that Weier was not criminally responsible for the stabbing due to mental illness. Experts argued that she suffered from “shared delusional disorder.”

In other words, Geyser’s schizophrenia made her think Slender Man was real, and Weier’s own disposition made her susceptible to Geyser’s delusion.

Meanwhile, Payton Leutner’s near-death made international headlines, fueling parents’ fears that the dark corners of the internet would turn their children into violent, socially isolated monsters who were willing to kill.

What was once a harmless online bogeyman was now — according to the relentless TV news coverage — cause for serious parental concern.

The stabbing incident seemed to be the final nail in the coffin for what was once a fun, harmless internet meme. “Please don’t kill anybody because of Slender Man,” pleaded Something Awful. And Marble Hornets released its final two episodes a couple of weeks later.

But horrifically, the now-infamous Waukesha stabbing wasn’t the only incident in which the Slender Man story claimed victims.

How The Mania Continued In Other Real-Life Crimes 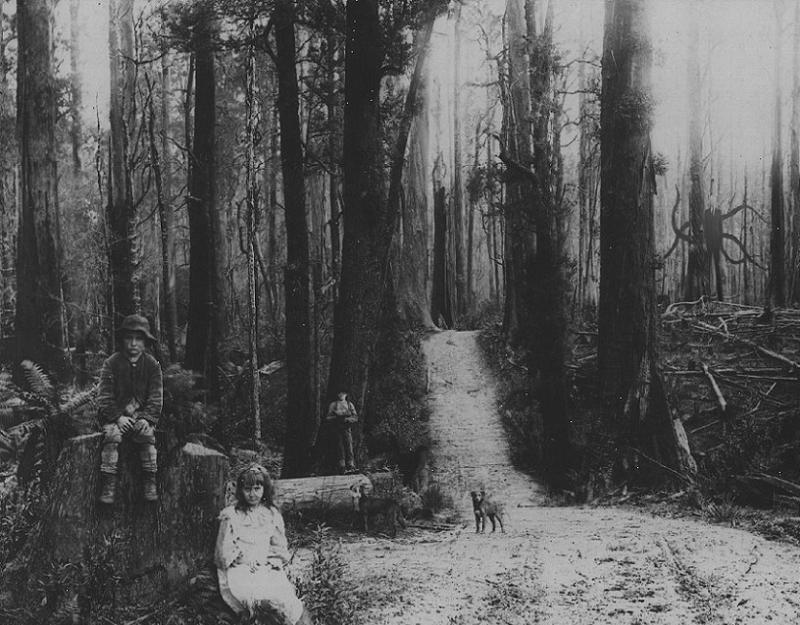 On June 5, 2014, a woman in Hamilton County, Ohio called the police after coming home from work and being attacked with a knife. The alleged attacker was the woman’s 13-year-old daughter who, according to the mother, greeted her while wearing a hood and a blank, white face mask.

The daughter was said to have had a history of mental illness and an obsession with the Slender Man legend that she read about online. The mother was later treated for wounds to her face, neck, and back.

Later that year, a single mother and her 9-year-old son woke up to a fire in their home in Port Richey, Florida. The woman’s 14-year-old daughter had started the blaze by lighting a bleach and rum-soaked sheet on fire.

The girl later admitted that she had been reading a lot about the Slender Man legend and eventually expressed remorse for setting the blaze. She even texted her mother to ask if everybody was okay.

But despite these horrific attacks, it should be noted that most Slender Man fans simply wanted to enjoy a spooky legend — without any violence. Still, some insist that eerie tales like these deserve a second look.

After the infamous stabbing of Payton Leutner, Waukesha Police Chief Russell Jack said that the attack “should be a wake-up call for all parents… The internet is full of dark and wicked things.” But for every frightened parent, there’s an internet user who just wants to have fun with Photoshop. “We just want to enjoy a good horror story,” said one moderator of the Slender Man Wiki. “We just want to be left alone.”

Ultimately, it would seem that humans, having long ago conquered most of our survival challenges, are simply titillated by terror.

Much like Eric Knudsen said, Slender Man is not so different from classic horror stories like Frankenstein. It’s yet another entry in a long line of spooks that creative people have conjured up to scratch that universal itch for fear.

After learning about the story of the Slender Man legend, read about how the legendary Mothman terrorized a West Virginia town in the 1960s. Then, find out what really caused the mass hysteria of the Salem witch trials.