As legend has it, the flying Mothman mortified countless Point Pleasant residents in the late 1960s. And when a bridge collapsed, the creature was blamed for the deaths of 46 people.

On November 12, 1966, in Clendenin, West Virginia, a group of gravediggers working in a cemetery spotted something strange.

They glanced up from their work as something huge soared over their heads. It was a massive figure that was moving rapidly from tree to tree. The gravediggers would later describe this figure as a “brown human being.” 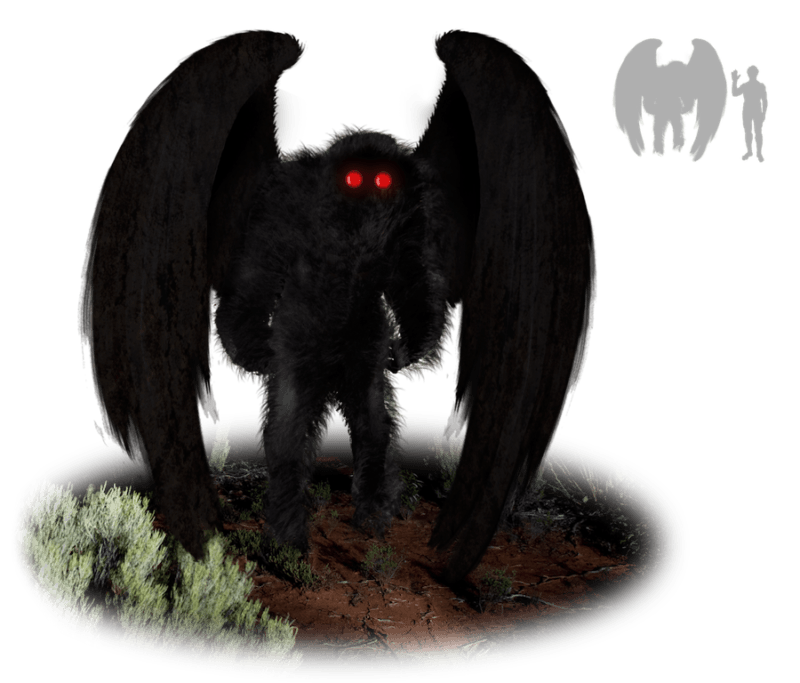 Wikimedia CommonsAn artist’s impression of the Mothman of Point Pleasant.

This was the first reported sighting of what would come to be known as the Mothman, an elusive creature that remains as mysterious as it was on the night that a few frightened witnesses first laid eyes on it.

The Legend Of The Mothman Of Point Pleasant 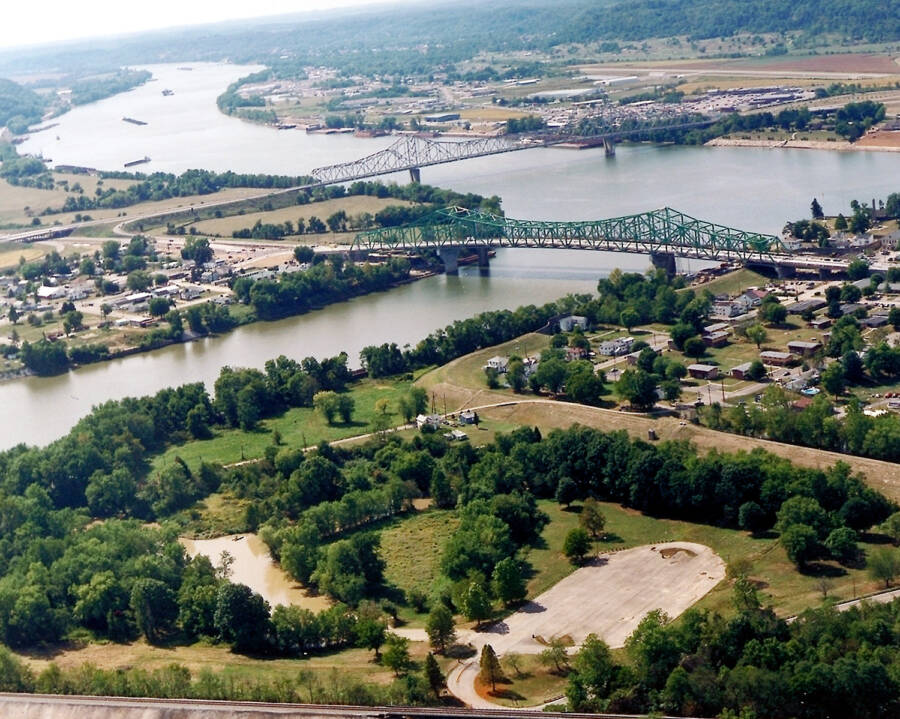 Just three days after the gravediggers’ initial report, in nearby Point Pleasant, West Virginia, two couples noticed a white-winged creature about six or seven feet tall standing in front of the car that they were all sitting in.

Eyewitnesses Roger Scarberry and Steve Mallett told the local paper, The Point Pleasant Register, that the beast had bright red eyes about six inches apart, a wingspan of 10 feet, and the apparent urge to avoid the bright headlights of the car.

According to the witnesses, this creature was able to fly at incredible speeds — perhaps as fast as 100 miles per hour. All of them agreed that the beast was a clumsy runner on the ground.

They knew this only because it allegedly chased their vehicle to the outskirts of town in the air, then scuttled into a nearby field and disappeared.

Knowing how absurd this must have sounded to a local paper in a small, Appalachian community in the 1960s, Scarberry insisted that the apparition couldn’t have been a figment of his imagination.

He assured the paper, “If I had seen it while by myself, I wouldn’t have said anything, but there were four of us who saw it.” 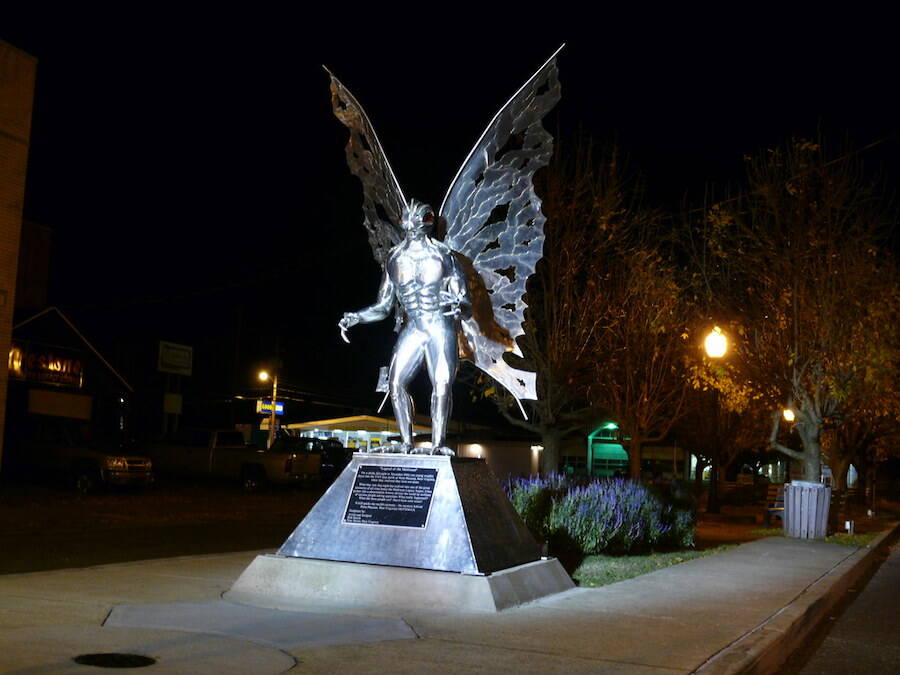 At first, reporters were skeptical. In the papers, they called the Mothman a bird and a mysterious creature. However, they did print Mallett’s description: “It was like a man with wings.”

But more and more sightings were reported in the Point Pleasant area over the next year as the legend of the Mothman took shape.

The Gettysburg Times reported eight additional sightings in the short span of three days after the first claims. This included two volunteer firefighters, who said they saw “a very large bird with large red eyes.”

Newell Partridge, a resident of Salem, West Virginia, claimed that he saw strange patterns appearing on his television screen one night, followed by a mysterious sound just outside of his home.

Shining a flashlight toward the direction of the noise, Partridge supposedly witnessed two red eyes resembling bicycle reflectors looking back at him.

This anecdote remains a popular one in the Mothman mythos, especially since it allegedly led to the disappearance of Partridge’s dog. To this day, some still believe that the fearsome beast took his beloved pet.

What Is The Mothman Really? 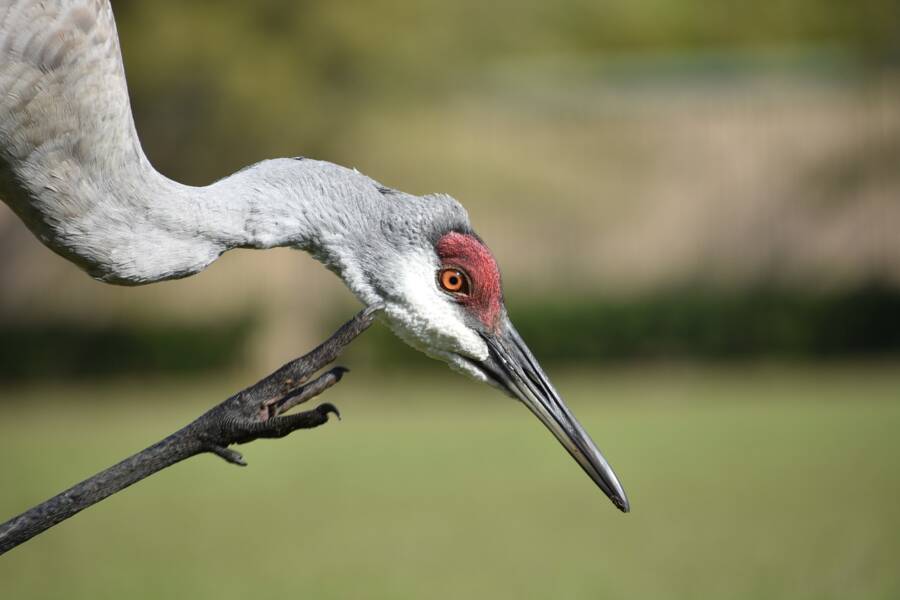 NeedpixA sandhill crane, a popular explanation for the Mothman legend.

Dr. Robert L. Smith, an associate professor of wildlife biology at West Virginia University, dismissed the notion that a flying monster was staking out the town. Instead, he attributed the sightings to a sandhill crane, which stands almost as tall as the average man and has bright red flesh around its eyes.

This explanation was compelling, especially given the number of early reports that had described the creature as “bird-like.”

Some people hypothesized that this crane was deformed, especially if it resided in the “TNT area” — a name that locals gave to a series of nearby bunkers that were once used for manufacturing munitions during World War II. It has been suggested that these bunkers have leaked toxic materials into the neighboring wildlife preserve, possibly affecting nearby animals.

Another theory suggests that the creation of the Mothman was the work of one very committed prankster who went so far as to hide in the abandoned World War II munitions plant, where some of the sightings occurred. 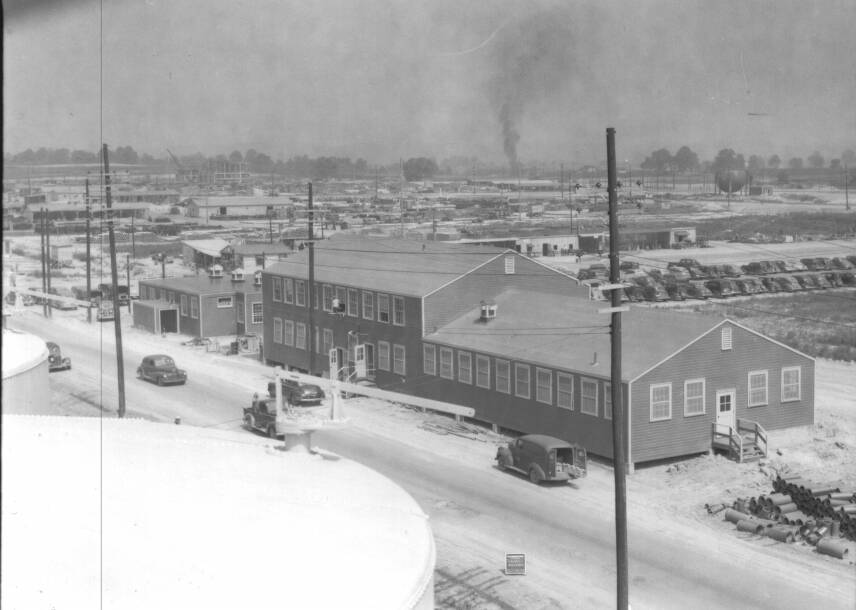 USACE/Wikimedia CommonsThe Laboratory and Supervisors Office Acid Area, part of what locals now refer to as the “TNT area,” in 1942.

This theory posits that when the national press ran with the Mothman story, people who lived in Point Pleasant began to panic. Locals became convinced they were seeing the Mothman in birds and other large animals — even long after the prankster had given up on the joke.

It’s worth noting that the Mothman legend bears a resemblance to several demon archetypes found among those who have experienced sleep paralysis, which may suggest that the visions are nothing more than the embodiment of typical human fears, pulled from the depths of the unconscious and grafted onto real-life animal sightings when people panic.

And then there are the paranormal explanations, a morass of complicated theories that weave together aliens, UFOs, and precognition. These theories paint the Mothman as either a harbinger of doom or, more sinisterly, its cause — a legend that has its roots in the tragedy that befell Point Pleasant shortly after the Mothman arrived. 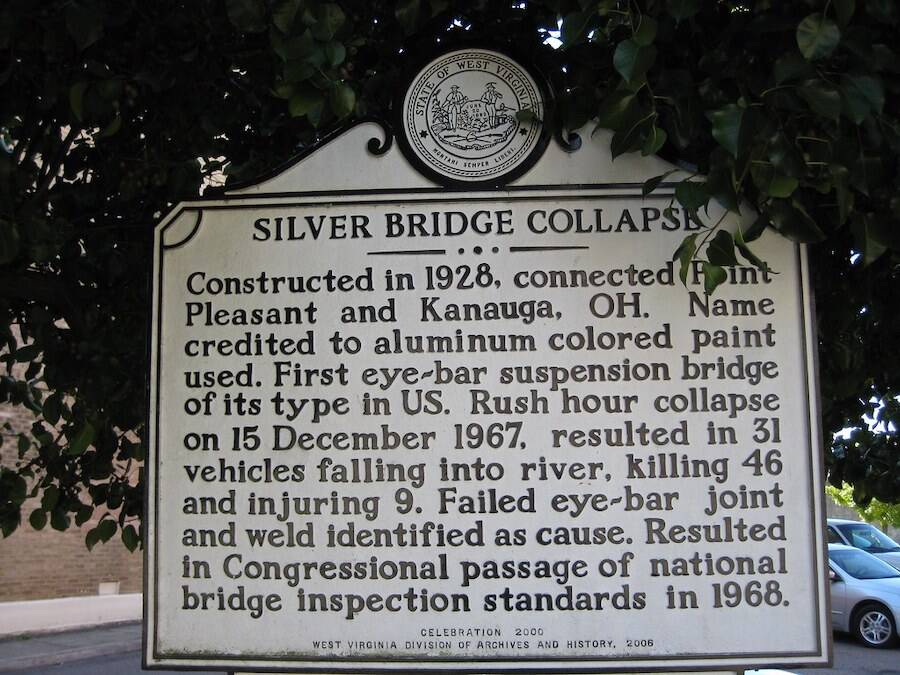 On December 15, 1967, just over a year after the first Mothman sighting, traffic was bad on the Silver Bridge. Originally built in 1928 to connect Point Pleasant, West Virginia, to Gallipolis, Ohio, the bridge was packed with cars.

This placed a strain on the bridge, which had been built in a time when cars were lighter. The Model T had weighed just 1,500 pounds — a modest sum compared to the 1967 average for a car: 4,000 pounds.

The bridge’s engineers hadn’t been particularly imaginative, nor had they been especially cautious, while creating this structure. The bridge’s design featured very little redundancy, meaning that if one part failed, there was almost nothing in place to prevent other parts from failing as well.

And on that cold December day, that was exactly what happened.

Without warning, a single eyebar near the top of the bridge on the Ohio side cracked. The chain snapped, and the bridge, its careful equilibrium disturbed, fell to pieces, plunging cars and pedestrians into the icy water of the Ohio River below.

Forty-six people died, either by drowning or being crushed by the wreckage.

Footage of the wreckage of the Silver Bridge and interviews with witnesses and survivors.

Following the Mothman sightings, the bridge collapse was the second terrible and bizarre thing to put Point Pleasant on the map in a year’s time. So it didn’t take long for some to connect the two.

In 1975, author John Keel conflated the Mothman sightings and the bridge disaster while creating his book The Mothman Prophecies. He also incorporated UFO activity. His story took hold, and the town soon became iconic among conspiracy theorists, ufologists, and fans of the paranormal.

The Legacy Of The Mothman 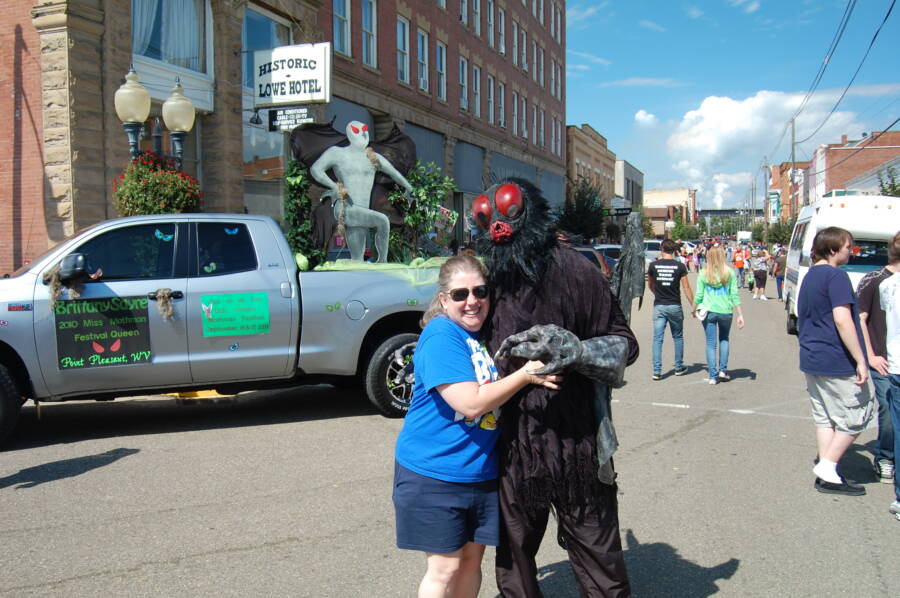 Point Pleasant’s fame as the home of the Mothman legend hasn’t waned in recent decades. In 2002, a movie based on Keel’s book rekindled interest in the Mothman.

In the Mothman Prophecies film, Richard Gere plays a reporter whose wife seems to have witnessed the Mothman shortly before her death. He finds himself inexplicably in Point Pleasant several years later with no clue how he got there — and he’s not the only one having trouble explaining himself.

As several locals experience premonitions of distant disasters, there’s talk of visitations from a mysterious figure called the Mothman.

The film — a supernatural horror and mystery — offers no conclusions, communicating instead an eerie feeling of disjointedness that was both panned and praised by critics. Most notably, the film popularized the image of the Mothman as a harbinger of doom.

The idea that visitations from the Mothman predicted disaster led some believers to make ties to the Chernobyl disaster of 1986, the Mexican swine flu outbreak of 2009, and the 2011 nuclear disaster in Fukushima, Japan.

As for sightings of the actual Mothman, they’ve mostly declined since the late 1960s. But every so often, a sighting emerges. In 2016, a man who’d just moved to Point Pleasant spotted a mysterious creature jumping from tree to tree. He claimed to local reporters that he was unaware of the local legend of the Mothman — until he allegedly spotted the beast himself.

Whether these sightings are real or not, the Mothman can still be seen in Point Pleasant today in the form of a historical museum, and also in the form of a 12-foot-tall chrome-polished statue, complete with massive steel wings and ruby-red eyes.

Furthermore, a festival commemorating the Mothman’s visits has taken place annually for years — a fun celebration that attracts locals and tourists alike. Every September, the festivities celebrate one of America’s strangest local legends that still has people scratching their heads to this day.

After learning about the legendary Mothman, investigate the modern-day internet myth of Slender Man. Then, learn the true story of Bloody Mary, the woman behind the mirror.