On December 15, 1967, the Silver Bridge collapsed over the Ohio River, shocking the town of Point Pleasant, West Virginia — and some believe that the mythical Mothman was responsible.

About a week before Christmas 1967, rush hour traffic crawled across the Silver Bridge that connected Point Pleasant, West Virginia, and Gallipolis, Ohio. Dozens of cars sat bumper-to-bumper on the structure. Then, without warning, the Silver Bridge collapsed into the Ohio River.

Thirty-one vehicles plunged into the water, taking 64 people with them. In the end, 46 victims lost their lives on that fateful day. Tragically, two of the bodies were never found. And 9 other people were left injured.

Eerily, in the months leading up to the Silver Bridge collapse, multiple locals had reported seeing a mysterious creature in and around Point Pleasant. They described the legendary Mothman as a 7-foot-tall beast with a wingspan of 10 feet and the ability to fly as fast as 100 miles per hour.

While most people didn’t take the Mothman sightings seriously at first, the local tragedy caused some to reconsider. But what actually made the Silver Bridge collapse? Could it have possibly been prevented? And why did some people blame the mythical Mothman for causing the disaster?

The Construction Of A Doomed Bridge 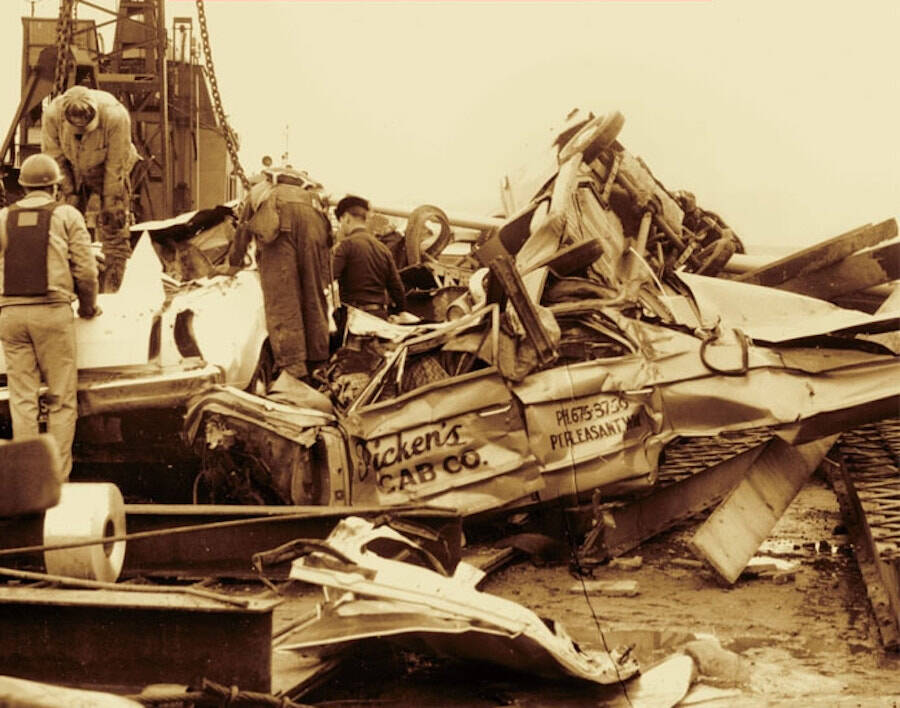 Long before the Silver Bridge collapse of 1967, locals had been complaining about the swaying structure for years. One survivor, Ben Cedar, recalled, “I was worried about that bridge every time I crossed over. If you got stuck in the middle of that bridge, it would wave back and forth, back and forth.”

First opened in 1928, the Silver Bridge had been designed by J.E. Greiner Company and built by the precursor to the West Virginia-Ohio Bridge Company as well as the American Bridge Company. It was a two-lane, 1,760-foot-long eyebar suspension bridge, and it took a year to finish.

From the very beginning, the builders cut corners. The bridge was originally meant to be suspended with traditional wire cables. However, an alternate bid for an eyebar design ended up being cheaper. Plus, this design would make the bridge one of the first structures of its kind in the United States.

But decades later, its design failed to meet modern standards. When the Silver Bridge was first built in the 1920s, the average car weighed about 1,500 pounds. By the 1960s, most cars weighed about 3,000 pounds.

Up to 4,000 of these heftier vehicles made their way across the bridge per day, causing stress on the eyebars. Meanwhile, the bridge itself still looked largely the same as it did when it was first constructed in the 1920s.

Still, the Silver Bridge was inspected somewhat regularly. And after one inspection in 1965, the structure underwent about $30,000 in repairs. Two further inspections followed in the summer of 1967. But no one would be able to detect a crucial problem with one of the bridge’s eyebars.

Though these eyebars were vital for the structural integrity of the bridge, there was no way to properly inspect them without taking them apart. So, no one knew that an eyebar had become defective until it was too late.

To make matters worse, the bridge had been constructed with very little redundancy, meaning that if one part failed, there was practically nothing in place to keep the rest of the structure from failing too.

Inside The Silver Bridge Collapse 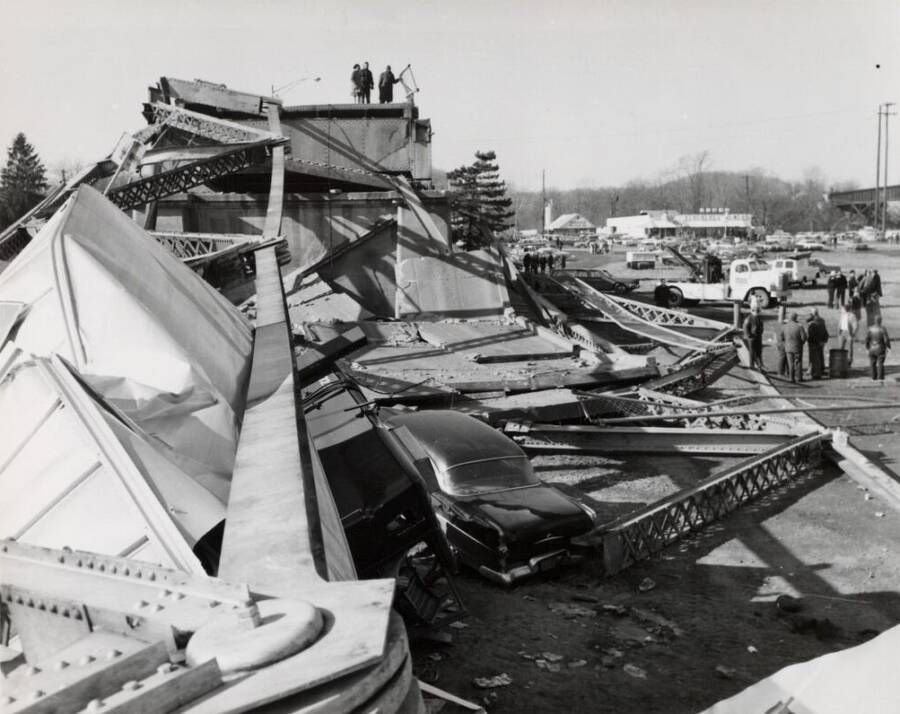 At about 5 p.m. on December 15, 1967, a pregnant woman named Charlene Wood was driving home from work when she went over the Silver Bridge. But then, she noticed a vibration beneath her and reversed her car. Just as she made it back to the precipice, the bridge gave out in front of her.

State trooper Rudy Odell was one of the first responders on the scene. When he got there, 31 cars and 64 people had already fallen into the Ohio River. By the end of the night, 46 people had either drowned in the water or died on impact as sections of the bridge landed on top of their vehicles.

“I could hear them hollering for help,” recalled Odell. “There was absolutely nothing I could do. It was a long way out into the water.”

While some survivors like Wood witnessed the incident up close, other survivors like Cedar had traveled over the bridge just moments before it collapsed and only heard about the disaster after the fact.

Other survivors had to be pulled from the water. Howard Boggs was one man who was saved by a rescue boat — with his wife and child nowhere to be found. Their bodies would later be discovered in the family car.

It would take weeks for the victims to be recovered. Since the collapse had crushed so many of the cars below, workers were unable to lift the vehicles out of the water until the bridge pieces could be removed. The U.S. Army Corps of Engineers leased 50-ton cranes to local authorities to help.

Meanwhile, the job of tagging victims’ bodies fell to Odell, who identified some people who he personally knew — including a father and his young son. Sadly, two bodies of known victims remain missing to this day.

While the cause of the deadly collapse would later be revealed as a construction issue coupled with an overload of traffic, some wondered whether the tragic disaster was caused by something far more ominous.

After all, throughout the late 1960s, many witnesses in and around Point Pleasant had reported seeing the legendary Mothman. Though the flying humanoid creature with bright red eyes seemed like an outlandish urban legend, the Silver Bridge collapse made some residents think twice about it.

The Legacy Of The “Mothman Bridge” 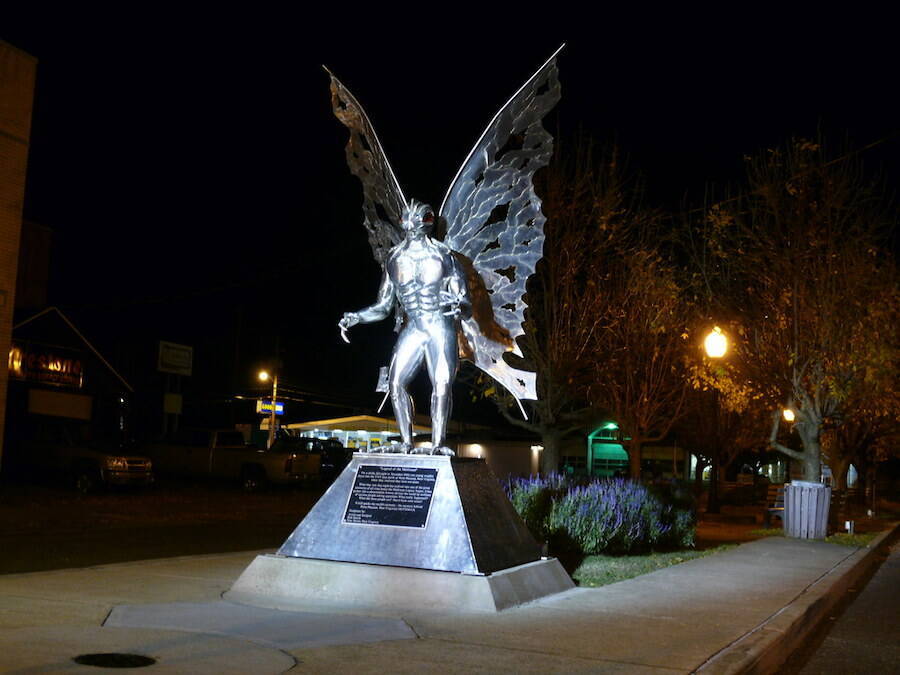 marada/FlickrThe legendary Mothman was spotted shortly before the Silver Bridge collapse, leading some to connect the two.

Soon after the disaster, authorities rerouted the Silver Bridge’s pathway to a hastily prepared ferry system and other local bridges. Though it seemed like a decent temporary fix, the economic losses would soon climb to about $1 million per month. It was clear that a replacement was needed.

President Lyndon B. Johnson expressed shock at “the cruel tragedy and loss of life.” In 1968, Johnson ordered a federal-state program to commence reconstruction. A year later, Silver Bridge would be replaced by Silver Memorial Bridge, which was about a mile south of the old structure.

Johnson also ordered the Presidential Task Force on Bridge Safety to look into the collapse and general bridge safety across America. The National Transportation Safety Board also investigated the Silver Bridge disaster.

It wasn’t until April 1971 when the National Transportation Safety Board finally revealed the cause of the Silver Bridge disaster: “a cleavage fracture in the lower limb of the eye of eyebar 330… The fracture was caused by the development of a critical-size flaw over the 40-year life of the structure as the result of the joint action of stress corrosion and corrosion fatigue.”

While the Silver Bridge collapse is mostly remembered as a tragic failure of engineering and inspection, it’s also remembered for its unusual “connection” with the Mothman. Since the bridge disaster was the second shocking thing that had put the region on the map after the Mothman sightings, it was only a matter of time before some connected the two.

In 1975, author John Keel linked the Mothman claims to the Silver Bridge disaster in his book The Mothman Prophecies. His story is a big reason why Point Pleasant is now a famous place for conspiracy theorists and ufologists. Some believe that the Mothman had tried to warn people of the bridge collapse, but others think that the beast caused it to happen.

Alleged Mothman activity aside, there’s no doubt that the Silver Bridge collapse was one of the worst bridge disasters in U.S. history. And that tragic night still lives on in the memories of those who survived.

After learning about the Silver Bridge collapse, read about nine alien abduction stories. Then, take a look at 11 scary urban legends.