By All That's Interesting | Edited By Kaleena Fraga

Women who gossipped in the Middle Ages faced public humiliation at the hands of their husbands when they were forced to wear the Scold's Bridle for hours on end. 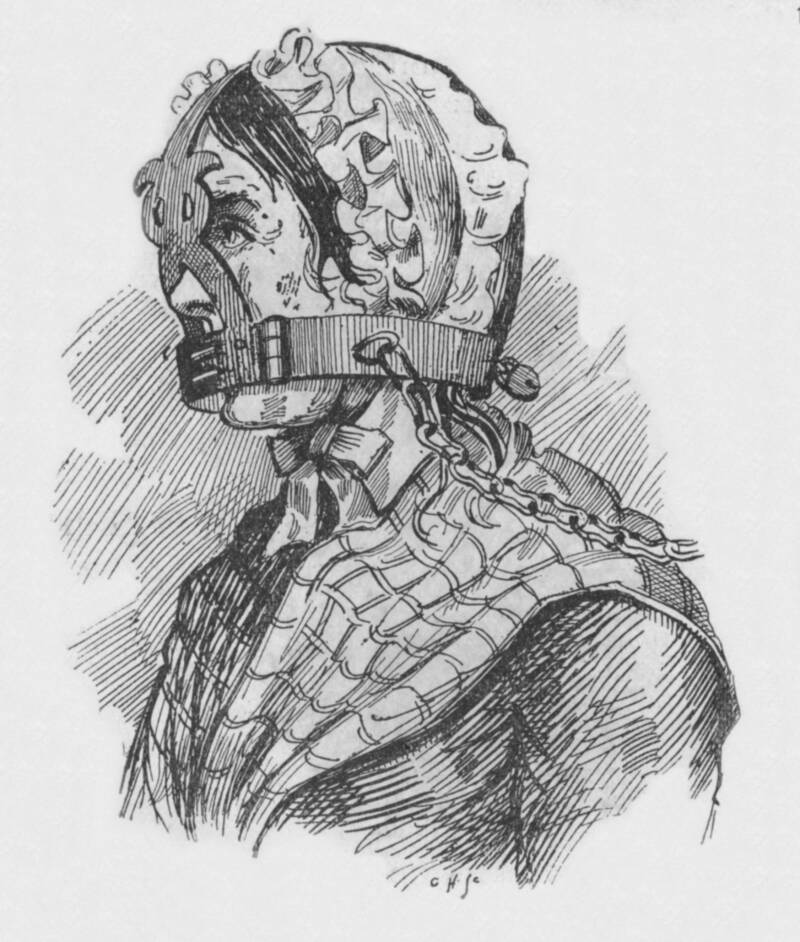 A bridle may be mostly associated with horses. But from at least the 16th century and well into the 19th, the so-called Scold’s Bridle was also used on people. This iron mask, fitted with a gag, was usually strapped onto women accused of gossiping, quarreling, or committing blasphemy.

The device had two purposes. The first, obviously, was to silence the wearer. The second was to humiliate them. People clad in a Scold’s Bridle were often paraded around town, where townspeople could jeer and throw things.

But as bad as that sounds, the Scold’s Bridle was hardly the only — or worse — punishment for women accused of speaking out of turn.

What Is A Scold’s Bridle?

For hundreds of years in the British Isles, one of the worst things someone could be was a “scold.” According to the British Library, this was a term used for women — and sometimes but rarely men — who gossiped, slandered others, fought loudly, or, basically, spoke out of turn.

To punish scolds, local entities like town councils and judges sometimes decided that the offending party must wear a Scold’s Bridle. 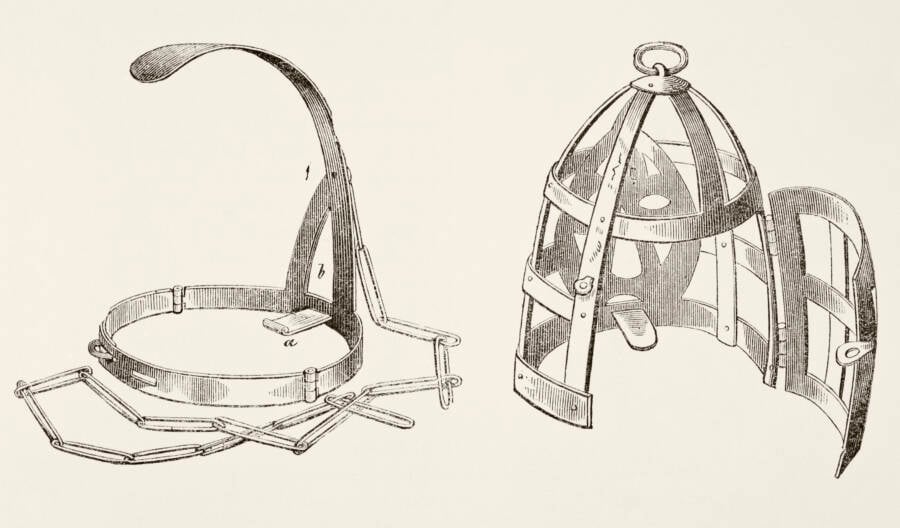 These devices varied in design but were often quite similar. They were iron masks which, according to the BBC, resembled “a muzzle or cage for the head.” A lock at the back held the bridle into place, and most had a metal gag to hold the tongue down. As the National Trust for Scotland notes, some of these gags were spiked which would cut the tongue.

According to the Museum of Witchcraft And Magic, the first reference to a Scold’s Bridle appears to date back to the 14th century, when one of Geoffrey Chaucer’s characters notes “would she were bolted with a Bridle.”

How Scold’s Bridles Were Used 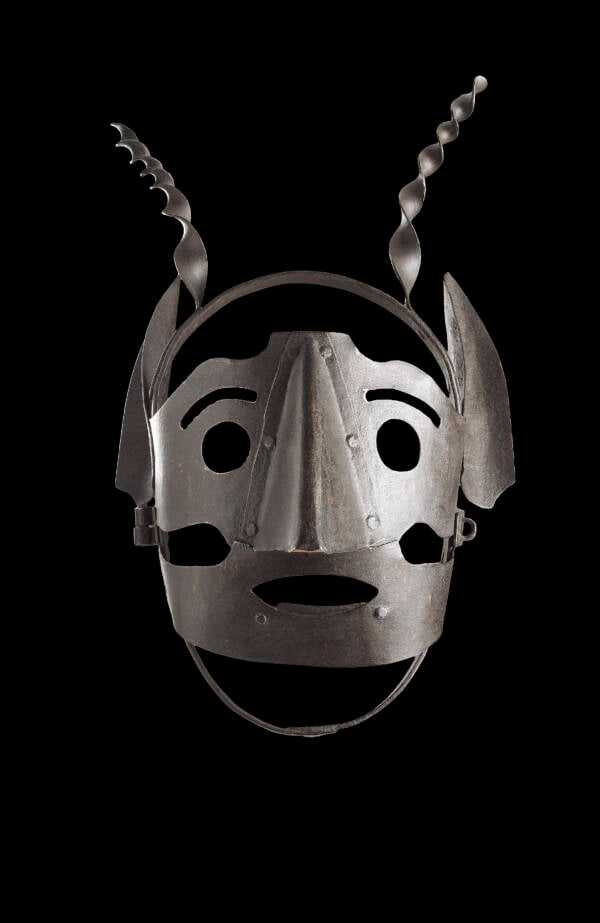 According to the Wessex Museum, the first documented use of a Scold’s Bridle, called an iron brank, appeared in 1567 in Scotland. (The last wouldn’t come until 1856.) In Edinburgh, one law declared that iron branks would be used on anyone who committed blasphemy or was deemed immortal.

From that moment on, the Scold’s Bridle appears sporadically across the historic record. It was used on so-called “scolds” and “shrews” and on women with “loose morals.” In 1789, a farmer in Lichfield used iron branks on a woman in order to “to silence her clamorous Tongue” according to the Museum of Witchcraft And Magic.

In addition to wearing the bridle, the farmer also forced the woman to walk around a field as local children “hooted at her.” Apparently “Nobody pitied her because she was very much disliked by her neighbours.”

The Scold’s Bridle wasn’t only used on scolds, however. In 1655, it was used on a Quaker named Dorothy Waugh. She was placed in the iron branks for hours as punishment for preaching in the market place, according to Lancaster Castle. Apparently, however, the townspeople were sympathetic. 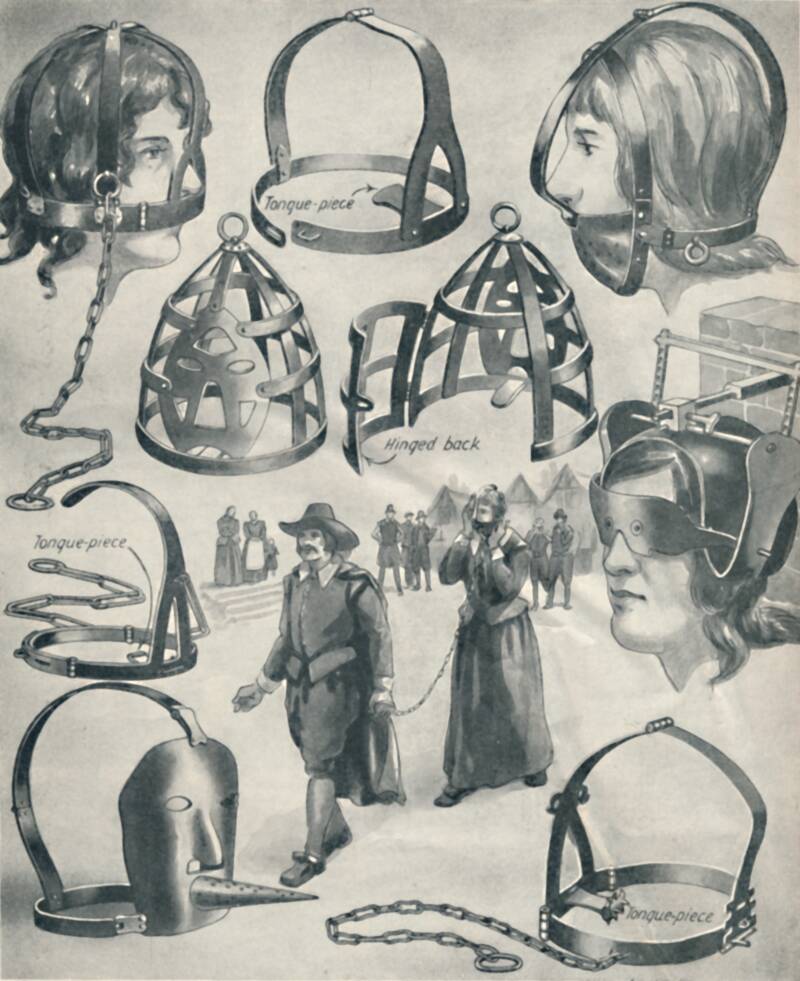 Passing references to Scold’s Bridles continued for the next two hundred years. At the dawn of the Victorian Era, however, this form of punishment started to fall out of fashion. According to the Museum of Witchcraft and Magic, a judge ordered an iron brank destroyed in 1821 by saying: “Take away that relic of barbarism.” He, like other Victorians, increasingly saw them as old-fashioned and absurd.

That said, the last recorded use of a Scold’s Bride took place 30 years later in 1856. And though iron branks were an especially cruel and tortuous form of punishment, they were hardly the only method that people dreamed up to discipline women accused of being scolds.

Other Punishments For Scolds 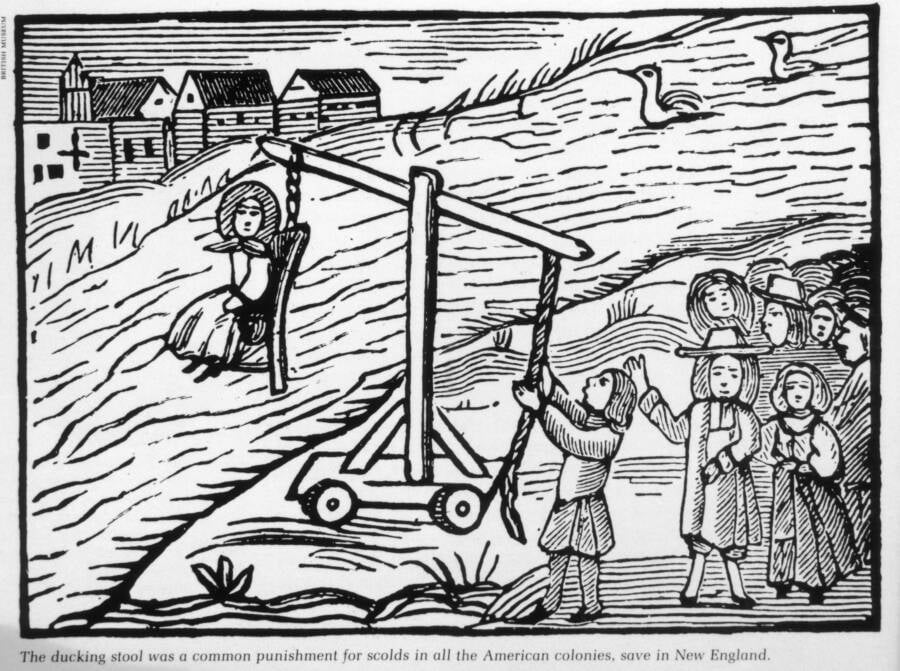 Fotosearch/Getty ImagesA ducking stool used in the American colonies circa 1690.

Being forced into a Scold’s Bridle was bad enough. But other punishments for scolds were just as humiliating, and some were so tortuous that they even resulted in womens’ deaths.

Take cucking stools and ducking stools. The two terms, often confused, refer to seperate punishments for scolds. In the Middle Ages, women accused of being scolds might be tied to a chair — or a toilet or commode — called a cucking stool. They might be left there or paraded thorugh town.

A worse punishment for scolds emerged around the Tudor Era: ducking stools. Like cucking stools, they involved tying a scold to a chair. But instead of leaving her there, ducking stools dunked women into water. This often resulted in women dying of shock or drowning.

The point in punishment scolds, whether with Scold’s Bridles or ducking stools, was to police moral behavior, humiliate the woman, and terrorize other women into silence. After all, it was hard to protest against a policy like the Scold’s Bridle when the implied threat was “you could be next.”

Fortunately, devices like Scold’s Bridles, cucking stools, and ducking stools have all long gone out of practice. But sadly the practice of silencing women or policing their speech has not.

For more macabre medieval practices like the Scold’s Bridle, check out the most painful medieval torture devices, and the way that medieval humans mutilated their dead to avoid them becoming zombies.