The seemingly eyeless creature most likely washed up as a result of Hurricane Harvey. 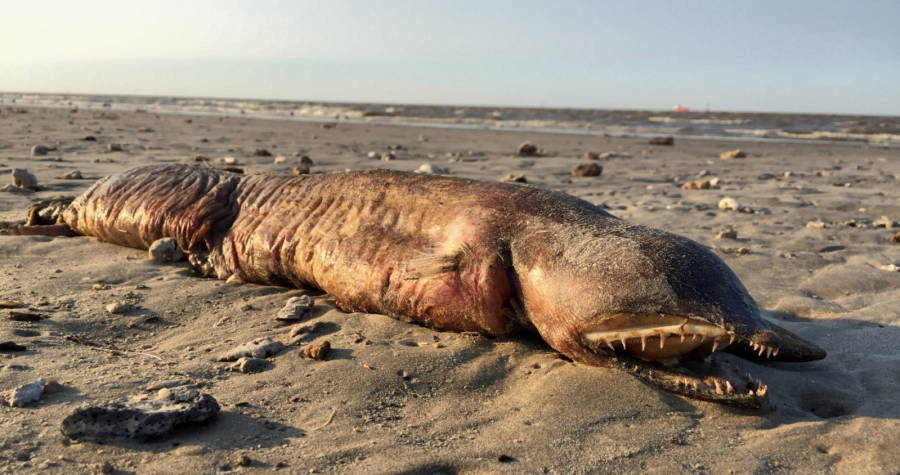 In the aftermath of Hurricane Harvey, people are finding all sorts of things in places they shouldn’t be. However, this might be one of the creepiest. If anything, it’s definitely the ugliest.

Twitter user and wildlife photographer Preeti Desai found the decaying fanged fish lying on the beach in Texas City, Texas and immediately posted photos to Twitter, asking the public for help in identifying it.

“Okay, biology twitter, what the heck is this?” she asked, posting her question alongside four different photos of the creature.

Okay, biology twitter, what the heck is this?? Found on a beach in Texas City, TX. #wildlifeid pic.twitter.com/9IUuuL65qh

The request made its way to biologist and eel specialist Dr. Kenneth Tighe, who believes that the creature is a fangtooth snake-eel.

Alternatively, he told the BBC, it could be a garden or conger eel, because “all three of these species occur off Texas and have large fang-like teeth.”

Hurricane Harvey’s high winds and extreme flooding could be responsible for the creature washing up on shore.

The fangtooth snake-eel, which is also known as a “tusky” eel, is found in the Western Atlantic ocean, while the garden and conger eels favor the warmer parts of the Atlantic and East Pacific oceans.

Besides Dr. Tighe, there have been a few other marine life specialists who’ve chimed in on the debate. Dr. Solomon David, an assistant professor of biological sciences at Nicholls State University, pointed out that the creature looks like it used to have pectoral fins.

No actual identification has been made, but the Twitterverse is still abuzz with some very interesting possibilities, including the most popular — that the creature is obviously an alien.