The Legend Of The Wolpertinger, The Horned Rabbit Said To Roam The Bavarian Alps

Likely created as a way for crafty taxidermists to make money off of gullible tourists, the wolpertinger is a mythical hare-deer hybrid that can supposedly be found in the forests of Germany.

From werewolves to dragons, mythical creatures have piqued human interest since ancient times. Stories of these fictitious animals have continued to gain popularity across the world through books and movies. But here’s one you may not have heard of: the wolpertinger. Sometimes called the wolperdinger, woipertinger, and volpertinger, the wolpertinger remains a cherished and integral mythical character in German folklore. 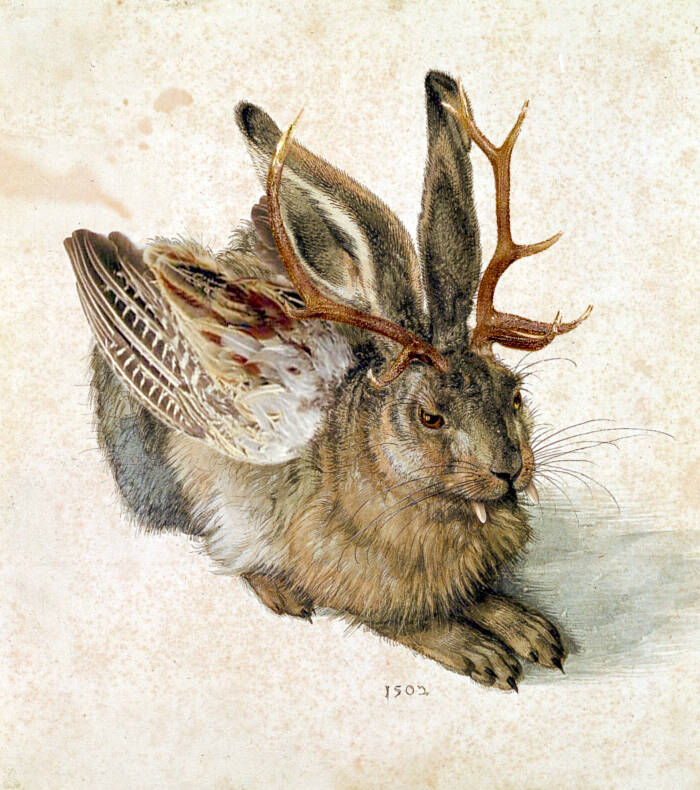 Rainer Zenz/Wikimedia Commons
The wolpertinger is a mythical creature that is often portrayed as a mixture of rabbit, squirrel, deer, and pheasant.

The wolpertinger certainly meets the criteria for animals that could cause nightmares. While the bizarre creature comes in many different forms, legend says its appearance stems from the mating of a hare and deer. Wolpertingers are typically classified as small mammals with the body of a hare, the antlers of a deer, and the wings, feet, or beak of a bird.

If you think the wolpertinger’s look is amusing, just wait until you hear the tales of the unusual animal. This is everything you need to know about the wolpertinger, the mythical hybrid creature that’s stretched people’s imaginations for centuries.

The Playful Origin Of The Wolpertinger

Thanks to some mischievous taxidermists in Bavaria, according to IamExpat, the wolpertinger made its way into German folklore. In the early 1800s, a group of taxidermists in southeast Germany began to piece together parts of different animals. One invention included the body of a hare and the antlers of a deer.

The taxidermists soon realized that they could sell their designs to gullible tourists as actual woodland creatures — and the legend of the wolpertinger was born. 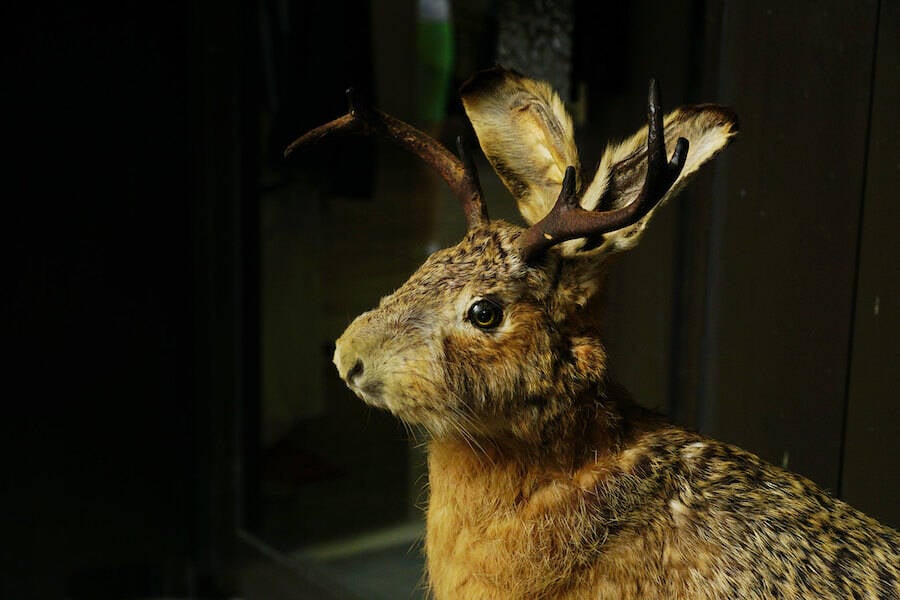 Elke Kemna/FlickrThe wolpertinger was created by German taxidermists in the 1800s.

Over time, the hybrid creations became more elaborate. The bizarre unions included foxes, ducks, and even pine martens. Because of the vast variety of outlandish pairings, no two wolpertingers looked exactly the same. However, the most popular combinations included body parts from rabbits, squirrels, deer, and pheasants.

Today, most wolpertinger exhibitions portray the body of a mammal with wings, antlers, a tail, and even fangs attached. Many displays of wolpertingers are actually composed of stuffed animals that are sold to tourists as souvenirs or tokens of German culture — and the mythical story of the wolpertinger is sold right along with them.

Brewing A Legendary Tale For Tourists

When it comes to fairy tales and fables, imagination is key. The haunting yet amusing creations of German taxidermists inspired locals and tourists alike to let their imaginations run wild, and thus, the fabled wolpertinger was born.

Legend has it that the fictional animal arose from a romantic relationship between a hare and a roebuck. This led to the birth of their hybrid child, the first wolpertinger. As more wolpertingers were born, the unique woodland creatures soon started mating amongst themselves, and various mutant offspring came to be. The future generations of wolpertingers then continued to become more and more extravagant and hilarious.

Many of the far-fetched stories can be traced to the eerie alpine forests of southern Germany. In fact, according to Encyclopedia Britannica, the region of Bavaria is home to a deeply wooded area in Germany that serves as the perfect backdrop for storytellers. According to the tale of the wolpertinger, hikers and tourists who pass through the forests should look out for the mysterious creature that roams beneath the trees. 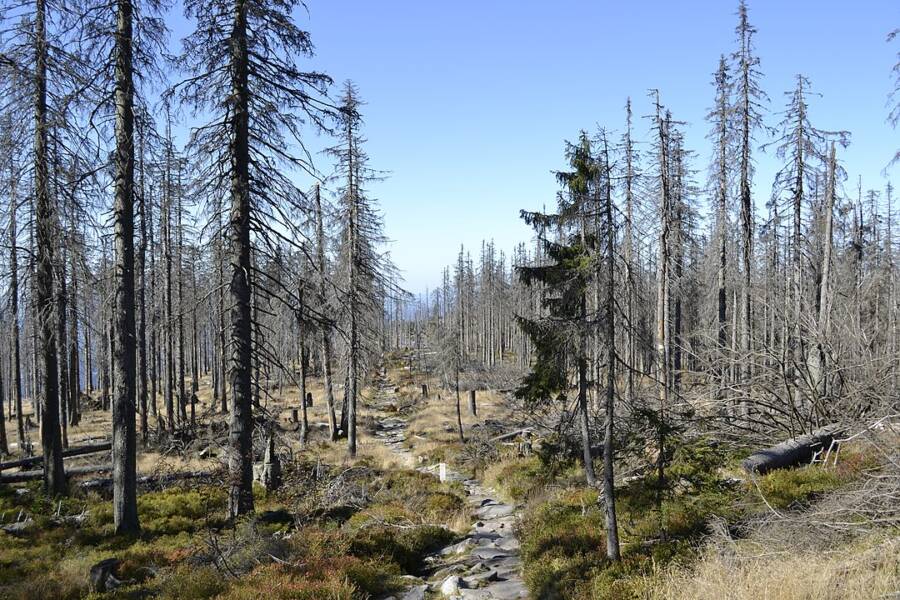 For centuries, this fictitious story has been shared to fool gullible visitors into thinking that the wolpertinger is part of the local fauna. While different variations of the tale have been spun, tourists have been led to believe that it’s rare to spot a wolpertinger. This is because the mythical creature is apparently extremely shy and therefore hard to approach.

The good news is that there’s no need to fear the wolpertinger. Legend has it that the animal only feasts on herbs, roots, and insects in the forests of Bavaria. However, the tale does warn of the creature’s skunk-like odor that lingers for seven years on anyone unlucky enough to be sprayed by it. In addition, if the creature’s saliva does happen to touch an unwary traveler’s skin, they should beware, as thick clumps of hair may soon begin to sprout all over them.

These amusing anecdotes are only the beginning of the folklore surrounding the wolpertinger, however.

How To Spot A Wolpertinger In Its Natural Habitat

Anyone who wishes to see a wolpertinger in its natural habitat must either be a beautiful young woman or be accompanied by one. This is because the shy wolpertingers are known to have a weakness for female beauty.

According to the myth, any man who wants to catch sight of a wolpertinger must venture into the forest with an attractive woman during a full moon and find a quiet nook, where the creature will likely reveal itself. If the goal is to trap the wolpertinger, hunters must sprinkle salt on its tail. Alternatively, trappers may light a candle and then use it to lure the animal inside a sack.

However, if you’re not up for these questionable adventures, you’re still in luck. According to Lingoda, you can spot stuffed replicas of the legendary wolpertinger in traditional hotels, restaurants, and pubs across Bavaria. Decorative statues and wall hangings bring to life this wacky yet enthralling mythical creature. 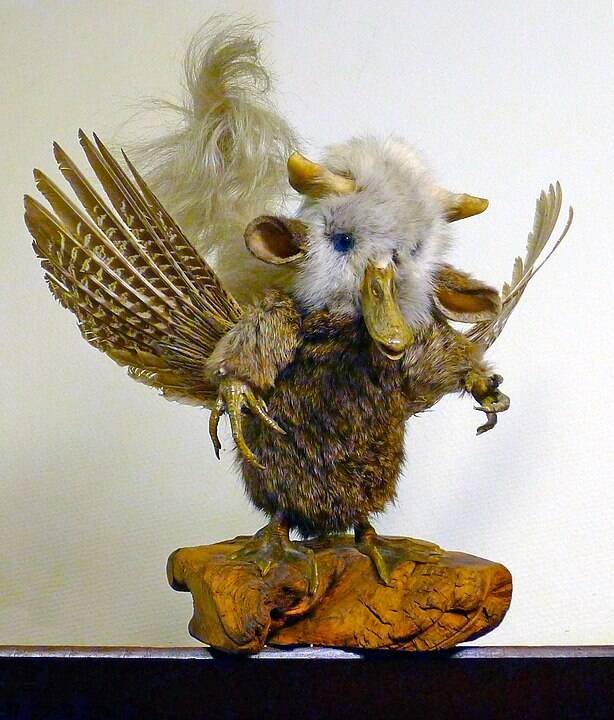 The wolpertinger even lives on in the exhibits of the German Hunting and Fishing Museum. The fictitious creature has been on display since the 20th century as a symbol of German culture and tradition.

Even if you’re skeptical about the reality of the wolpertinger, it’s undeniable that this creature remains an integral part of German folklore and continues to enthrall visitors to Bavaria.

Now that you’ve read all about the wolpertinger, learn more about another one-of-a-kind animal, the maned wolf. Then, check out these 11 terrifying mythological creatures.