Seances: When Manipulating The Desperate Was Big Business

The history of the seance is one of seeing the sad and vulnerable as an easy business opportunity, adding gauze and then calling it a party.

The human race has a conflicting relationship with their mortality. On the one hand, we are endlessly fascinated by and focused on it; on the other, we cannot conceive of a world in which our loved ones, separated by death, are permanently out of reach.

A handful of cynical and opportunistic individuals saw a business opportunity in that, and thus spiritualism was born. It posed that spirits of the dead can communicate with the living, took hold in the United States and across Europe in the late 19th and early 20th centuries. It became trendy and popular to hold a séance performed by a medium, who would run the gathered groups’ activities. 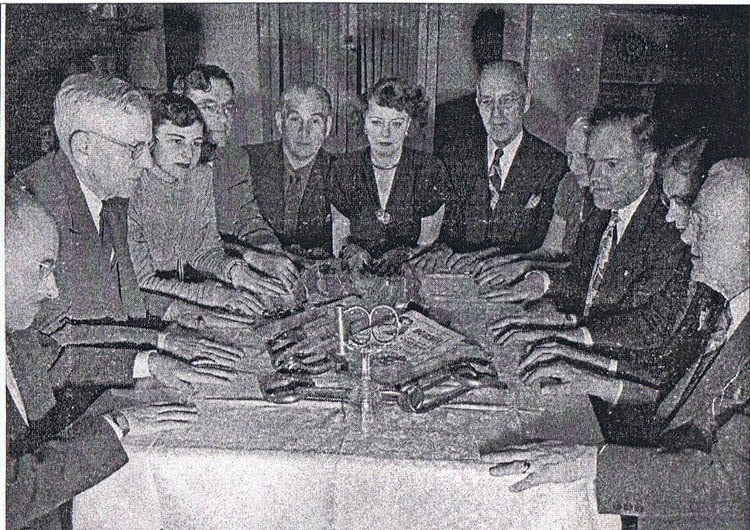 It seems that the Lincolns were among the practice’s more prominent early adopters. During Abraham Lincoln’s presidency, his wife Mary Todd reportedly held séances in the White House to keep in touch with their young son who had died. 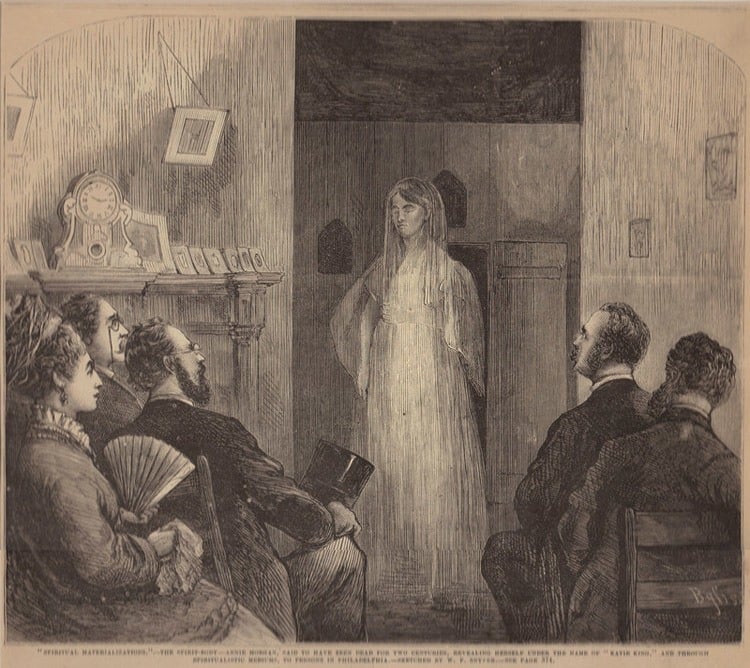 In the 1870s, Katie King was the name spiritualists gave to the female apparition that would appear during séances. Katie King was believed to be the daughter of John King, a spirit control – or higher spirit that would communicate and organize the lesser spirits during the ceremony. According to the mediums of the time, John King claimed to be the spirit of the pirate Henry Morgan. The argument of whether Katie King’s spirit was real or a fraud was a notable public controversy of the era. 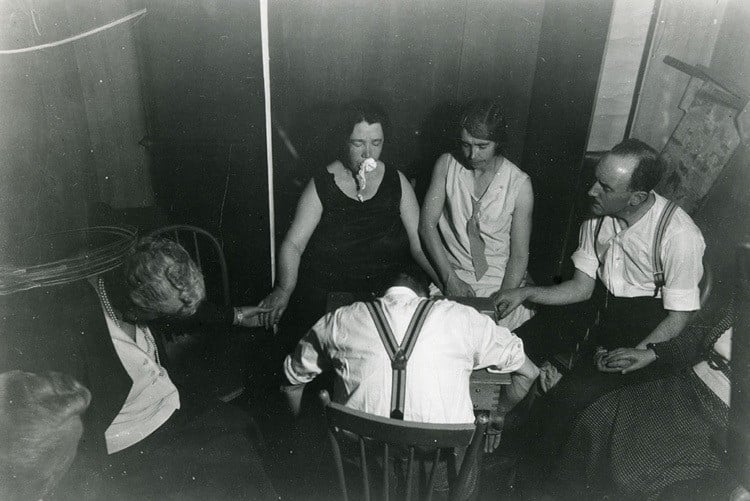 Mediums would mediate the connection between the living and the dead; often passing messages from the deceased to their living family and friends. Other ways in which the medium would facilitate the connection would be through the ringing of strategically placed bells, levitating objects or ghostly apparitions, and by expelling a gelatinous substance from the body which came to be known as ectoplasm. 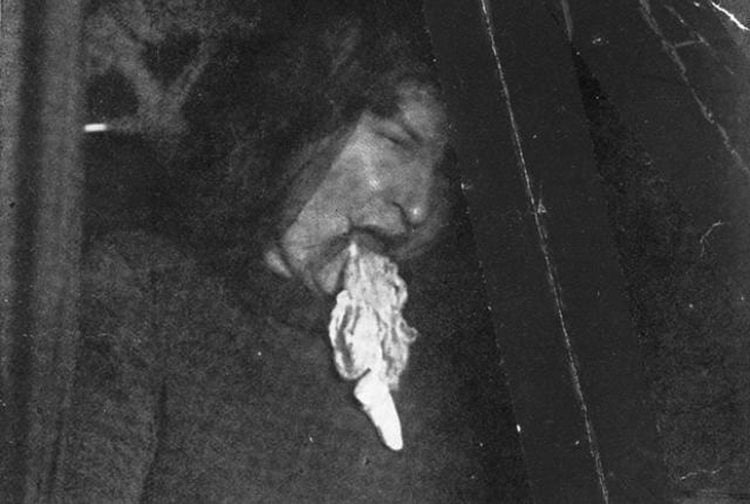 Ectoplasm, a supernatural viscous substance that is purported to exude from the body of a medium during a spiritualistic trance and form the material for the manifestation of spirits, was generally made and ingested by the medium before arriving for the séance. The ectoplasm was usually made of gauze, muslin, chiffon, or sheep’s lung. 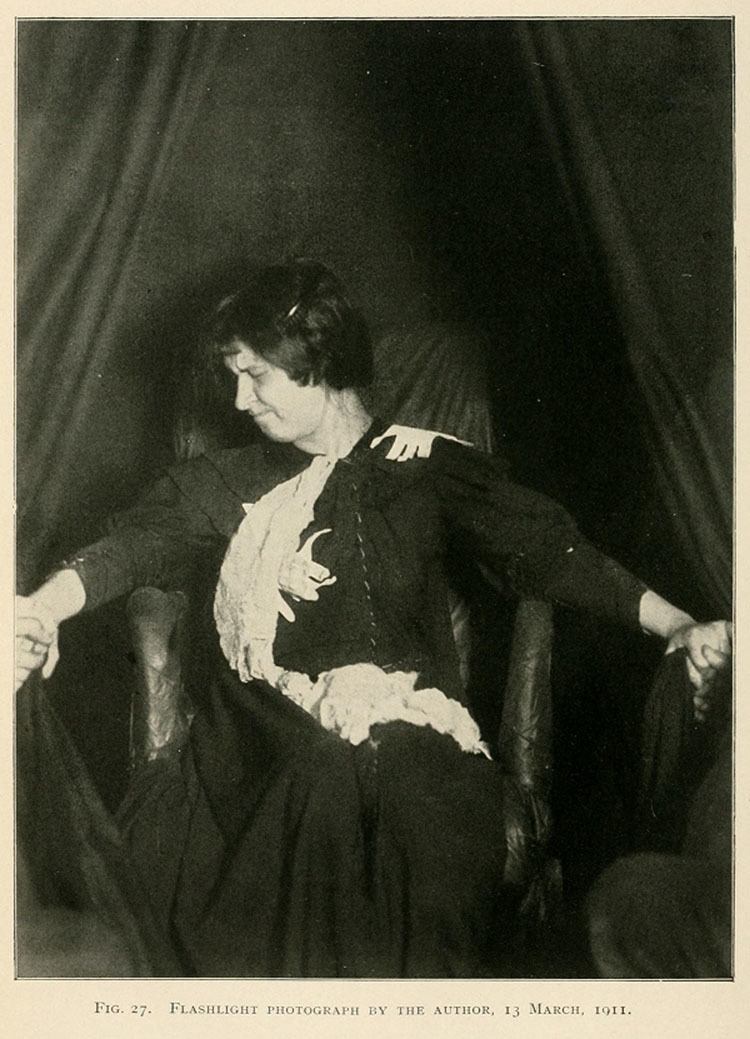 French medium Marthe Beraud (also known as Eva C. and Eva Carrière) was one of the most prominent spiritualists and psychic mediums of the early 20th century. The first to implement the use of ectoplasm, Carrière was described as “perverse and neurotic.” 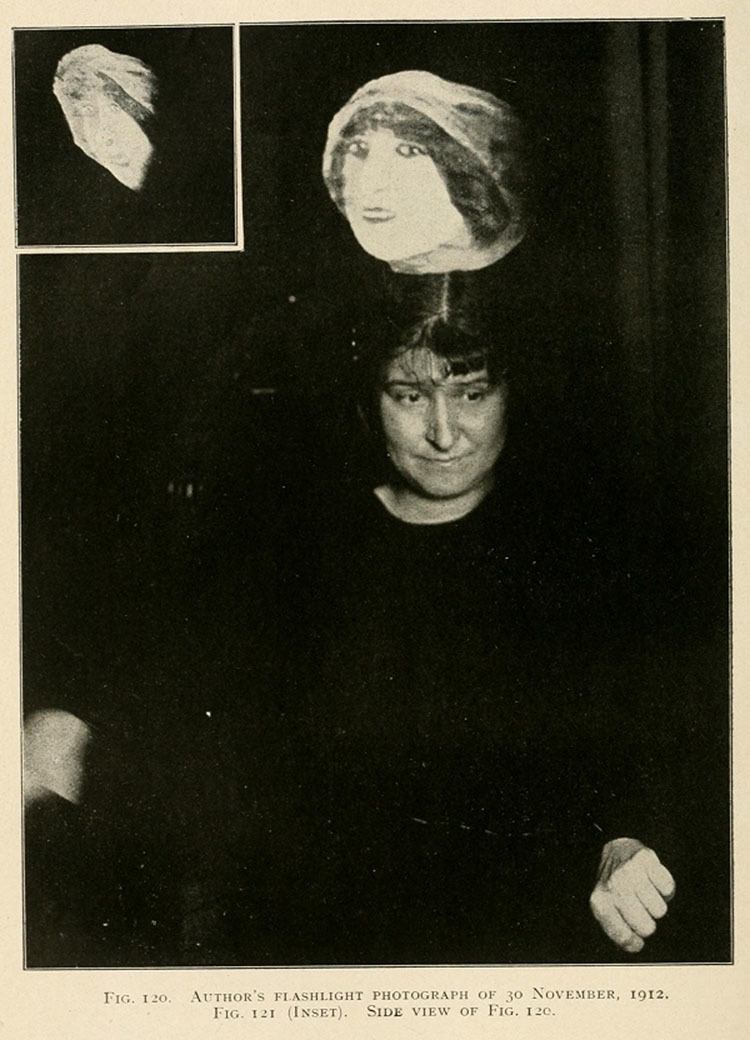 Carrière was well known for her habit of running around the séance room naked, and even indulging in sexual acts with members of the attending audience.

During the course of the show, Carrière’s companion Julliette Bisson would insert her finger into Eva’s vagina to show that no ectoplasm had been placed there to fool the patrons beforehand. She allegedly would strip again at the end of a séance and demand another full gynecological exam. 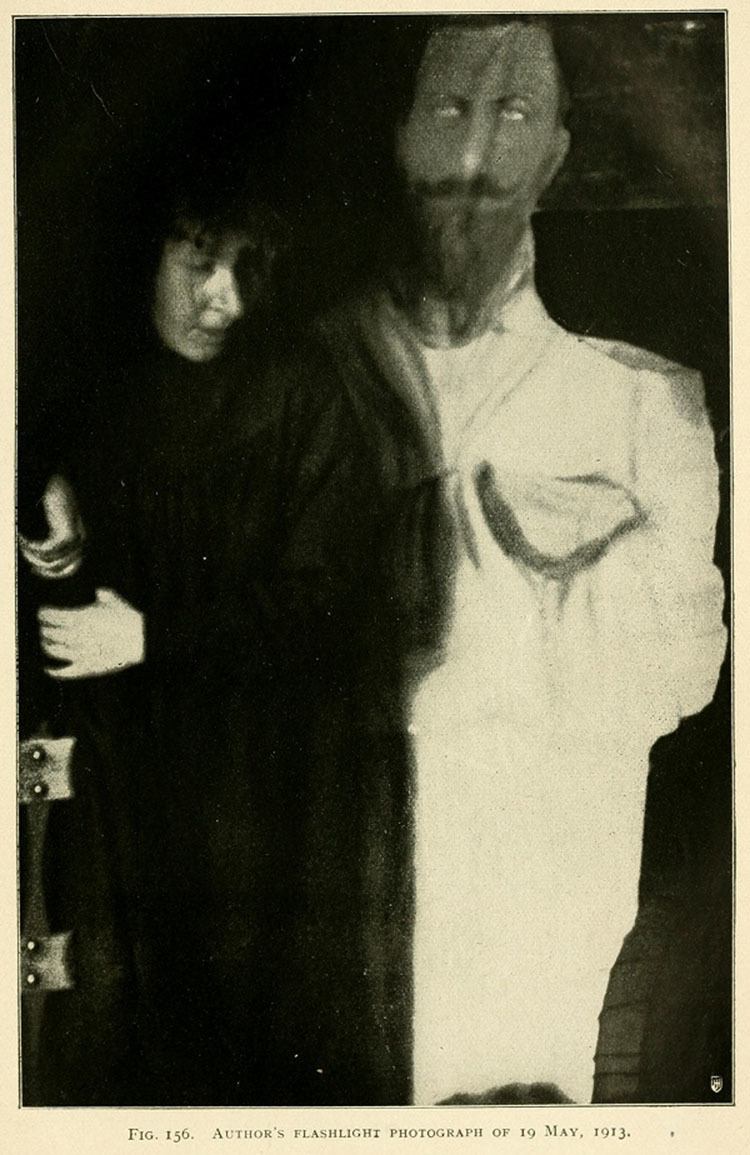 The performances by Eva Carrière were condemned by many as being fraudulent and pornographic. She had many detractors at the time, and several investigations cited proof of the deceptions perpetrated by Eva and Julliette. No matter what proof was brought forth by any group or individual, many still truly believed that through their efforts, they had made contact with the dead.

Eva’s best and most outspoken supporter was Sir Arthur Conan Doyle, who is best known as the creator of the fictional detective Sherlock Holmes. After investigating a séance performed by Eva Carrière, Doyle asserted that her performances were genuine and that he did not believe she had engaged in any deception. 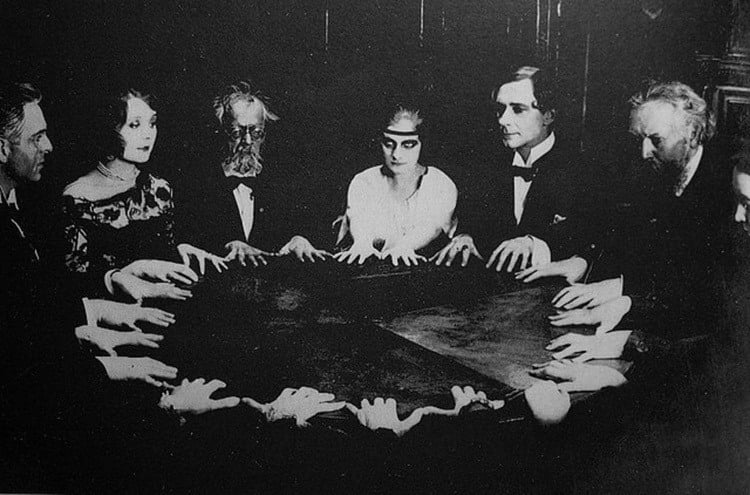 Unlike his ultra-rational character Sherlock Holmes, Doyle drifted towards the fantastic and supernatural in his later life. After he and his wife held séances to reach departed members of their family, he declared himself a spiritualist and traveled the world to give lectures and even wrote books on the subject.

In his travels to North America, Doyle famously clashed with the world-famous illusionist Harry Houdini – who scoffed at the idea of communing with the dead – and argued that any spiritualist’s tricks could be recreated by a competent magician. 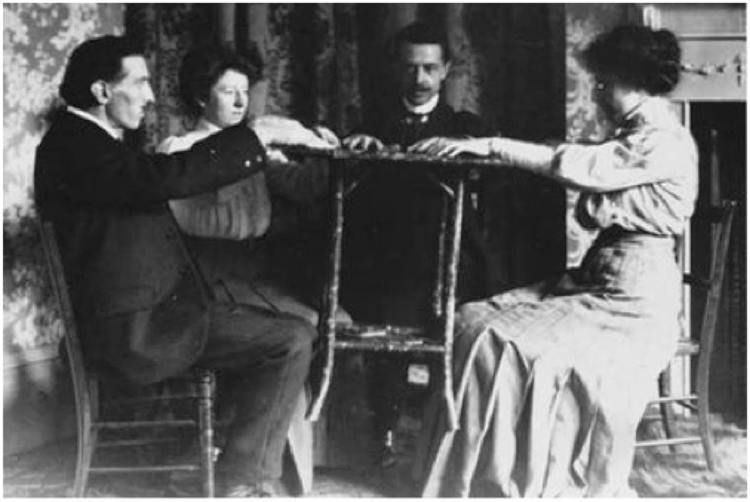 Ironically, after his death in 1926, Houdini’s wife Bess began having séances in a tea house that she had opened in New York. The couple had an agreement that whoever were to die first would then attempt to contact the other.

They had a pre-decided message that the deceased was to convey to a medium in order to prove the contact from beyond. The code to be passed was “Rosabelle- answer- tell-pray, answer- look- tell- answer, answer- tell,” in commemoration of Bess’ wedding band which bore the inscription “Rosabelle.”

Like any grieving widow, Bess believed that the efforts would be successful, especially because if anyone could return to the mortal plane from the land beyond it was her escape artist husband. No such luck, and the rituals officially concluded on Halloween night of 1936, when the ‘Final Houdini Séance’ was held by Beth Houdini. 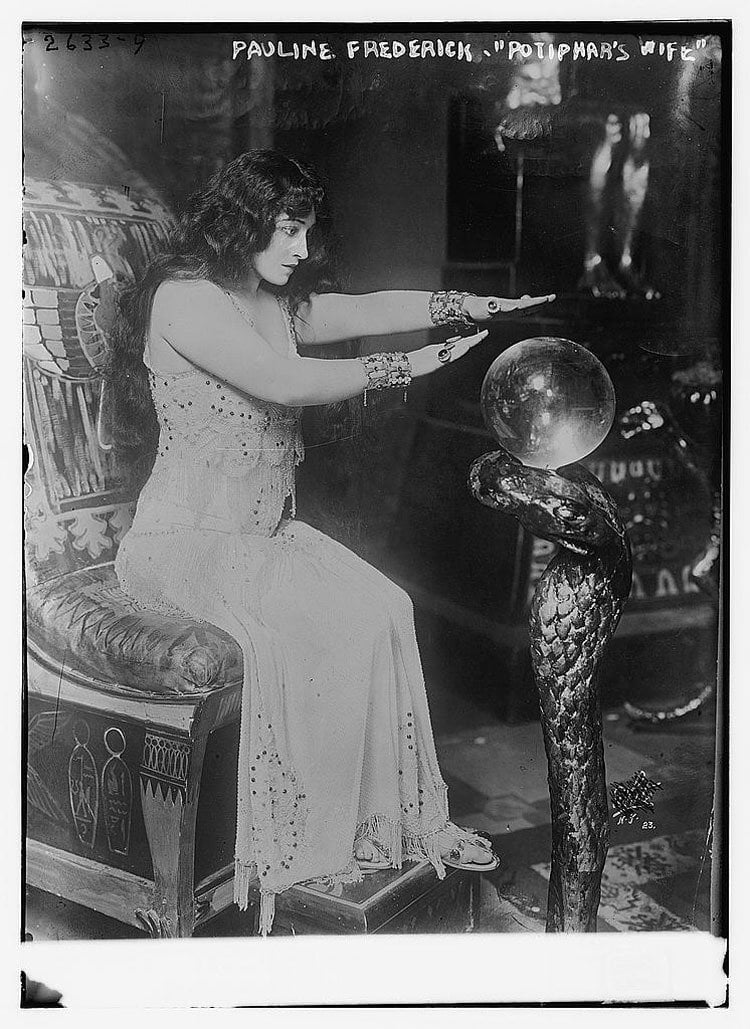 Wanting to cash in on the craze, pop culture adopted the seance into the woodwork, and for a time the subject of séances and mediums were popular in film and on stage.

Another common occurrence was the appearance of spirits and apparitions in photographs taken during or even shortly after the night’s festivities. Some like those above seem so staged that one wonders how anyone could have taken them seriously. But that’s what made seances so brilliant: mediums used people’s vulnerability, sadness, and desperation as a means to manipulate their clients while they financially gained. 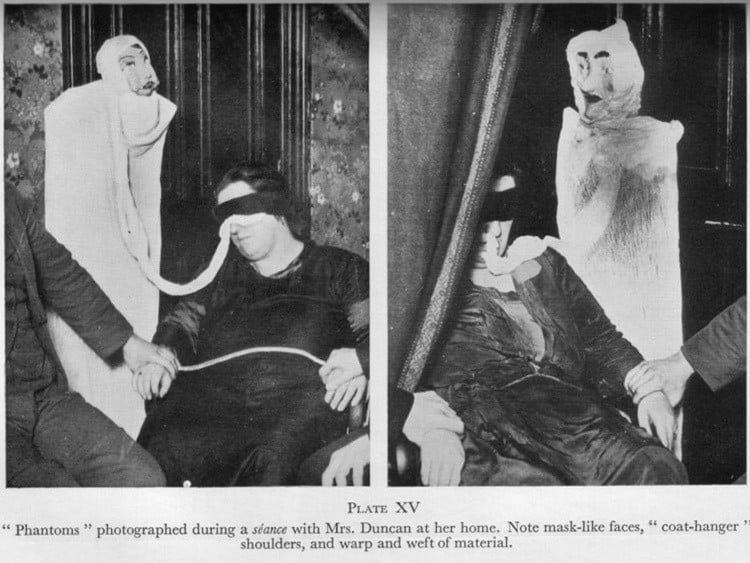 Possibly the hardest trick to believe during the height of the movement was the use of dolls as spirits. Also known as phantoms, it is somewhat understandable that these may have caused a spook coming out of the shadows of a dark room, but these coat hanger visages would not hold up under even the most minor of scrutiny.

After years of societal acceptance and promotion courtesy of the social elite, most if not all mediums and spiritualists were discredited, and the fad of seances has mostly faded away.

There will always be those whose loneliness allows them to believe anything—even that they can talk with the dead, so there will always be séances taking place somewhere. But with today’s technology and its easy disproval of hoaxes, the height of its popularity is buried firmly in the past.