Was Sirhan Sirhan really the man who killed Robert Kennedy? Or was there a larger conspiracy at play? 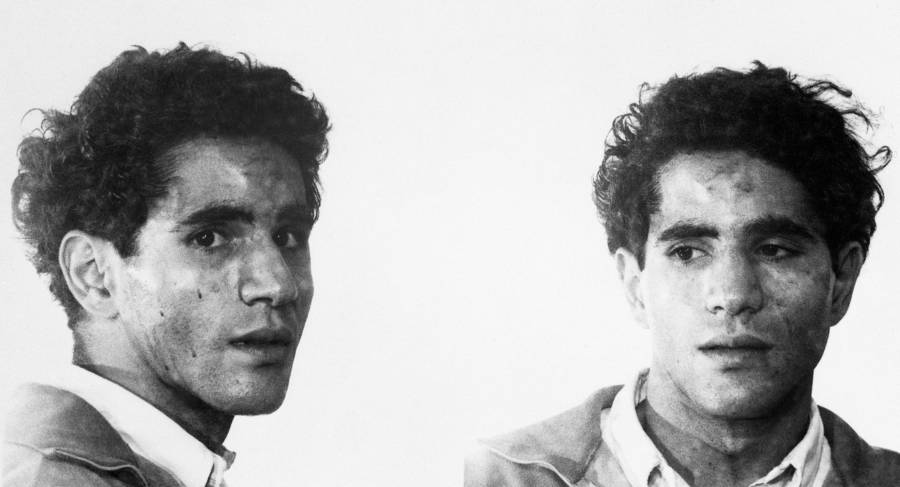 History knows Sirhan Sirhan as the man who killed Robert Kennedy. He was convicted under the decision that he was motivated by anger and vengeance for his country. But it appears that there could be more to this story than that.

On June 5, 1968, Sirhan shot Kennedy in the kitchen of the Ambassador Hotel in Los Angeles. But who was this 24-year-old that ended the life of a could-be president?

Of Palestinian descent and born in 1944 in Jerusalem, Sirhan Bishara Sirhan entered the world in a region already choked by conflict. His early life would foreshadow the grisly decisions he would make as a young adult.

In Palestine in 1947, war broke out. The violence forced the Sirhan family to flee their affluent neighborhood in Jerusalem and they relocated to territory controlled by Jordan. In an interview with the Washington Post in 1979, Sirhan’s mother Mary detailed the horrors her son had witnessed as a boy. He’d seen soldiers blown apart, severed limbs, and his own brother killed by a truck that had swerved into him to avoid gunfire.

“He was a victim all his life,” Mary Sirhan said almost 20 years after her son killed Bobby Kennedy. “He never had a childhood, never was happy, never laughed — all he has seen is fear, hunger, dying human beings in pieces. It’s hard enough for a big man, but for a child…And look what happened to him.”

The conflict bled into the Sirhan household as well. After Sirhan Sirhan Sr. lost his home and his job to war, he became emotionally unstable. He began to beat his wife and children. Finally in 1957, the family fled the violence and immigrated to the United States. Sirhan Jr. attended a Lutheran school where he was described as quiet and bookish. But the violence and conflict had already done too much damage to the boy.

The Sirhans settled in a suburb of Pasadena, California. They lived about 30 minutes from the Ambassador Hotel where their son would end Bobby Kennedy’s life. 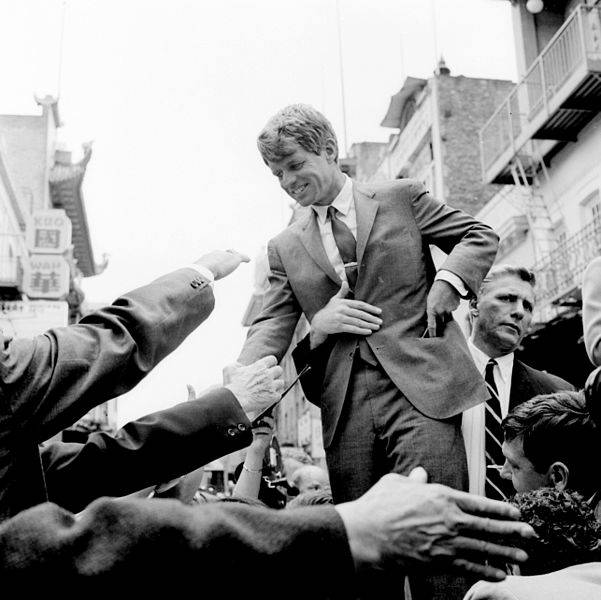 Wikimedia CommonsBobby Kennedy campaigning for the presidency in 1968.

On March 16, 1968, Robert F. Kennedy announced his intentions to run for president.

It was a controversial move. The Democratic party didn’t want him to run as most had thrown their support already behind the incumbent Democratic president, Lyndon B. Johnson, who was seeking a second term. Younger Americans felt that Kennedy was an opportunist who had only decided to join the race after observing the strong performance of another Democratic Senator, Eugene McCarthy, in the New Hampshire primary.

“I run because I am convinced that this country is on a perilous course,” Kennedy addressed a room of anxious supporters and journalists. “I run,” Kennedy continued, “because it is now unmistakenly clear that we can change these disastrous, divisive policies only by changing the men who are now making them.”

On March 31, 1968, Lyndon B. Johnson took to television to tell the American people that he “would not seek, nor accept” the nomination for president. Johnson’s exit from the race set off a madcap campaign among Democrats. On the Republican side, political giants Richard Nixon, Nelson Rockefeller, and Ronald Reagan battled amongst themselves. Meanwhile, Kennedy seemed to embody a hopeful side of politics. Sadly, his decision to enter the political fray would prove to be a fatal one.

On May 18, Sirhan Sirhan took to his journal. In the notebook that would soon become crucial evidence against him, he wrote: “My determination to eliminate R.F.K. is becoming the more and more of an unshakable obsession…Robert F. Kennedy must be assassinated before June 5, 1968.”

But what was the impetus for these frenzied entries and subsequent violence? Accounts on Sirhan’s motivation vary. By one account, Sirhan had heard on the radio that Bobby Kennedy, campaigning for Jewish votes, vowed to send 50 fighter jets to support Israel.

However, Kennedy made the promise to send jets to Israel eight days after Sirhan’s violent journaling of May 18.

Victory And Assassination In California 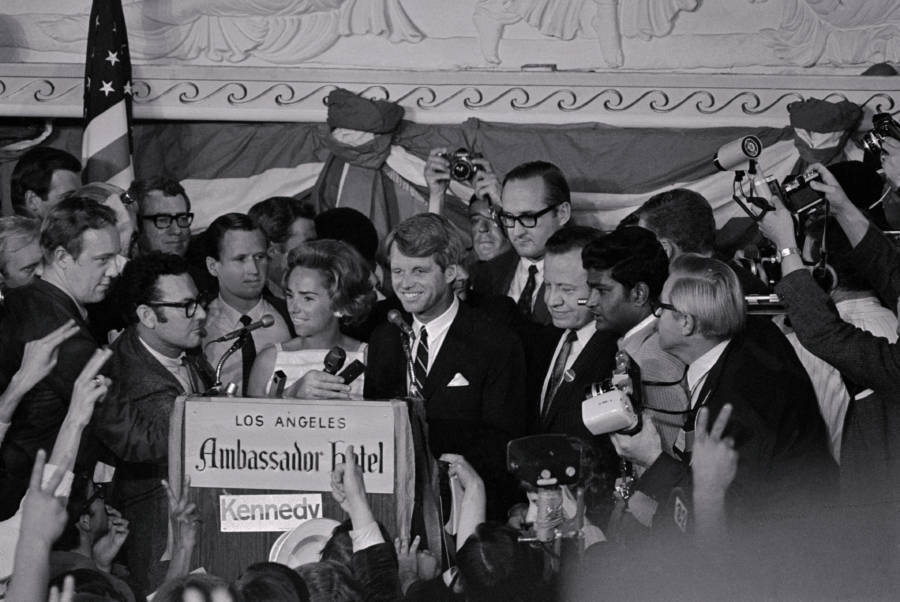 All That’s InterestingRobert Kennedy celebrates his victory in the California primary at the Ambassador Hotel. June 5, 1968.

Regardless of why, Sirhan did act on his violence on June 5, 1968, as jubilant supporters of Bobby Kennedy gathered in the lobby of the Ambassador Hotel to cheer on his champion. Kennedy had just won the California primary. In a light-hearted mood, Kennedy thanked his dog, Freckles. He then spoke his last public words with his pregnant wife, Ethel, at his side:

“We are a great country, an unselfish country, a compassionate country. And I intend to make that my basis for running. So, my thanks to all of you, and now it’s on to Chicago and let’s win there.”

Kennedy headed to the kitchen, and to his death. 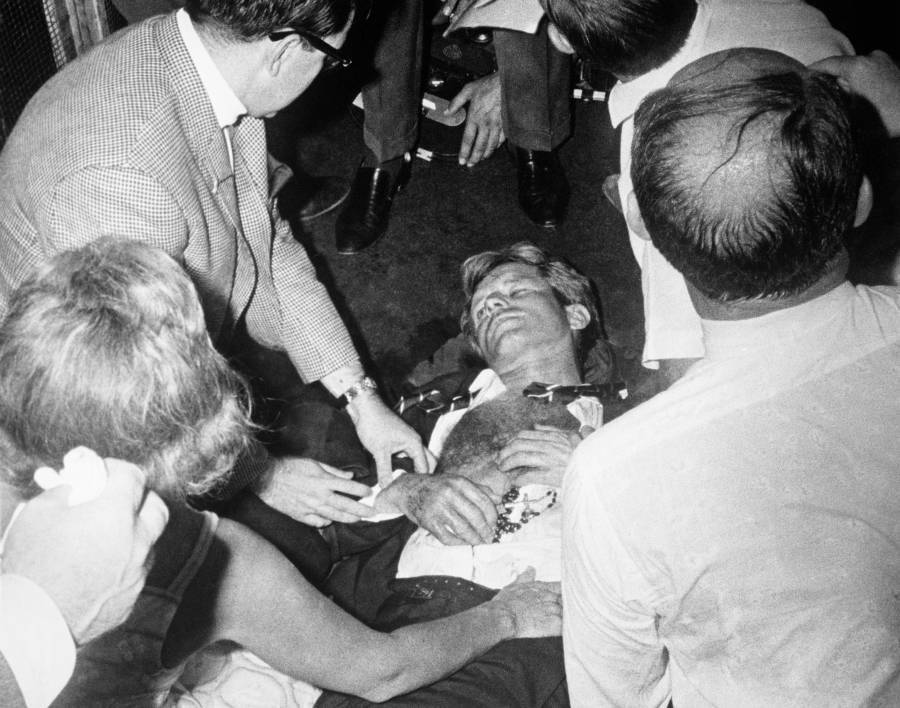 Getty ImagesBobby Kennedy lies bleeding after being shot in the kitchen at the Ambassador Hotel.

It happened quickly. Six pops, like firecrackers, fired into the air, although the number of gunshots is today disputed. Kennedy slumped to the floor. Juan Romero, a busboy, knelt next to him and tried to keep his head off the concrete. Sirhan shot five others as well. All but Kennedy would survive.

Andrew West, a reporter for the Mutual Broadcasting System, had followed Kennedy into the kitchen. On camera, he gave a breathless and panicked play-by-play: “Rafer Johnson [a friend of Kennedy] has a hold of a man who apparently fired the shot. He has fired the shot. He still has the gun. The gun is pointed at me right at this moment! Get the gun! Get the gun! Get a hold of his thumb and break it if you have to!”

“Let me explain!” Sirhan Sirhan shouted as horrified witnesses disarmed him. “I did it for my country!”

At his interrogation, Sirhan explained that he’d purposefully chosen June 5 to kill Robert Kennedy. It was the first anniversary of the start of the Six-Day War between Israel and an Arab coalition of Egypt, Jordan, and Syria.

At his trial, Sirhan reportedly told the court that Kennedy’s support for Israel “burned me up; if he were in front of me, the way I felt then, so help me God, he would have died right then and there.”

Theories Of Innocence and Conspiracy 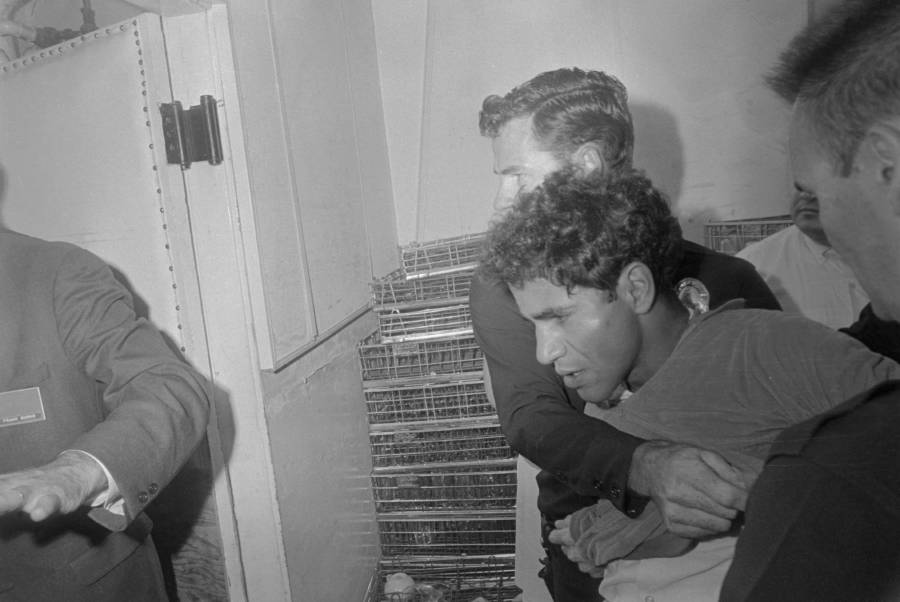 Getty ImagesSirhan Sirhan is held back by two men after shooting Kennedy.

Sirhan was sentenced to death by gas chamber at the San Quentin prison on April 23, 1969, after a jury had convicted him of first-degree murder. He stayed on death row for two years before California outlawed the punishment. When it was reinstated, Sirhan was reprieved and remains imprisoned for life.

Sirhan’s own account of his state of mind before and during the assassination fluctuates over the years he was tried and serving time. On the stand, he took something of an anti-Israel stance which he claimed to have directed towards Kennedy. But years later, Sirhan would claim that he did not remember killing Kennedy. His attorney even asserted that Sirhan had been brainwashed.

In 1980, he said that while the anniversary of the Six-Day War was certainly an impetus for his anger, he was also very drunk the night he allegedly shot the candidate.

He has since appealed for parole 15 times as of 2016. His appeals have often been supported by some unlikely characters who sense foul play or conspiracy, including those closest to Robert Kennedy himself.

While conspiracy theorists do not often have an intimate connection the case in question, those in support of Sirhan Sirhan’s innocence certainly do: including the candidate’s own son, Robert Kennedy Jr., and one of his campaign aides, Paul Schrade. Schrade, on the night of June 5, 1968, took a bullet himself. 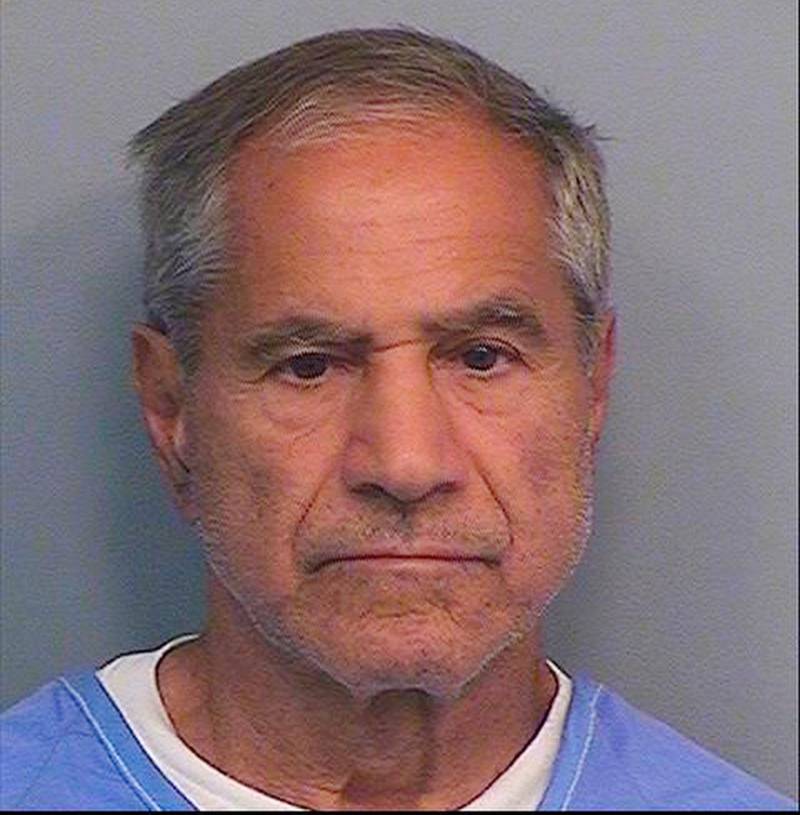 They point to several oddities in the case.

First, there is the matter of the number of bullets involved in the assassination. Witnesses claim to have heard more than six shots. In the recording of Polish journalist Stanislaw Pruszynski, some believe that up to 13 shots can be heard — but Sirhan Sirhan had a gun that could only fire eight shots.

The fatal bullet that entered Bobby Kennedy came from the back below his ear. However, witnesses remember Sirhan standing in front of the senator.

Robert Kennedy Jr. noted that his father, “as the chief law enforcement officer in this country [Kennedy served as Attorney General]…would have [been] disturbed if somebody was put in jail for a crime they didn’t commit.”

Schrade, 91 years old, even went as far as to testify at Sirhan’s parole hearing in April 2016. “The evidence clearly shows you were not the gunman who shot Robert Kennedy,” Schrade said directly to the man accused of murdering his friend.

The question remains, then; who killed Bobby Kennedy? Until a more compelling story is revealed, Sirhan Sirhan will spend the rest of his life in jail for the crime. Among some of those closest to Bobby Kennedy, however, another belief persists: that the truth is still out there.

After this look at Sirhan Sirhan and the ongoing uncertainty of who killed Bobby Kennedy, read the forgotten story of Rosemary Kennedy who received a lobotomy. Then, check out these spectacular photos of John F. Kennedy.