Discover The Secrets Of Skinwalker Ranch, From Navajo Shapeshifters To UFO Encounters

This 512-acre plot of land in Utah known as Skinwalker Ranch is said to be cursed with UFOs, witches, and horrific cattle mutilations. Look inside if you dare.

Since 1996, Skinwalker Ranch has established itself as a possible paranormal hotspot. For some theorists, the 512-acre plot of land in Utah potentially holds answers to UFO and crop circle phenomena. Some even believe extraterrestrial activity regularly happens there.

The Ballard property derived its name from the Navajo folktale of the skinwalker. As legend has it, the ominous being is a malevolent witch. It can transform itself into any creature it chooses.

These are typically four-legged mammals like coyotes, but skinwalkers can sometimes appear as owls or crows. While skeptics think this whole concept is just a myth, eyewitness accounts across the decades beg to differ. On top of that, there’s more to the ranch than just shape-shifters.

According to History, cattle have been found mutilated in an oddly surgical and bloodless manner on the property. Alleged UFO sightings have been plentiful in the sky and some have called this place “cursed.”

It all began with Terry Sherman, who essentially fled his newly-bought property after experiencing too much unusual activity to handle. It was 1996.

What Is Skinwalker Ranch?

Almost nobody knew about the site until The Deseret News published an article called “Frequent Flyers?” on Jun. 30, 1996. It chronicled how desperate property-owners Terry and Gwen Sherman were to stop the purported UFO activity plaguing their new home.

“For a long time we wondered what we were seeing, if it was something to do with a top-secret project,” said Terry Sherman. “I don’t know really what to think about it.” 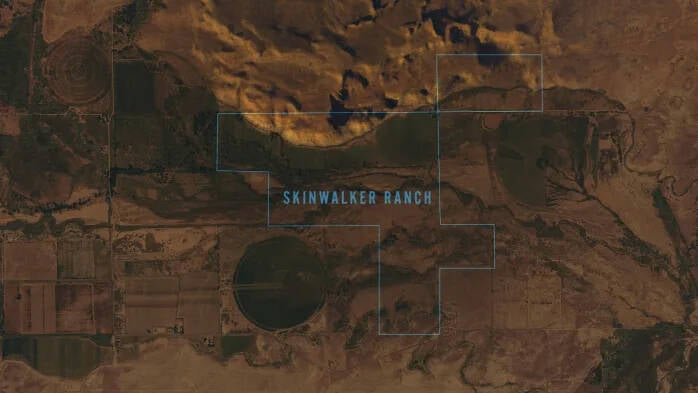 The couple, their teenage son, and their 10-year-old daughter all claimed they had seen three specific types of UFOs numerous times during the course of 15 months. One was small and boxy, another was 40 feet long, and the third was an enormous craft the size of several football fields.

One of them shone a red wave of light. Another emerged out of a circular, orange orb resembling an aerial doorway. To their credit, the Shermans videotaped two of their sightings. Meanwhile, they also observed crop circles.

One instance saw three 8-foot circles in a triangular pattern, 30 feet from each other, on flattened grass. A nearby pasture had circles three feet wide and a foot or two deep, with perfectly flattened dirt in the centers. As time went on, incidents on Skinwalker Ranch only got weirder — and scarier. 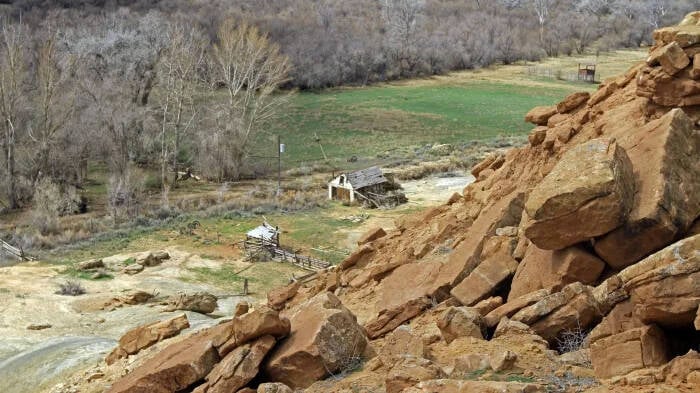 One night, a flying light followed Gwen Sherman on her drive home. On another, while Terry Sherman was out in the fields with the family dogs, he heard male voices speaking an unfamiliar language — and they seemed to be speaking about 25 feet above him. His dogs went crazy.

At one point, seven of the family’s cows were either missing or dead. The cattle deaths were bizarre to say the least. One dead cow had a hole cut in the center of its left eyeball but was otherwise untouched. Another dead cow had the same incision, as well as a 6-inch hole carved out of its rectum. A strange chemical smell was present both times.

Other cows disappeared entirely, some with their hoofprints suddenly stopping in the paths they left behind.

“We’ve seen [the UFOs] enough and we know pretty much what the craft look like, and I think it’s definitely associated with the cattle mutilations,” said Terry Sherman. “When we see the crafts and then the cattle, we have problems.” 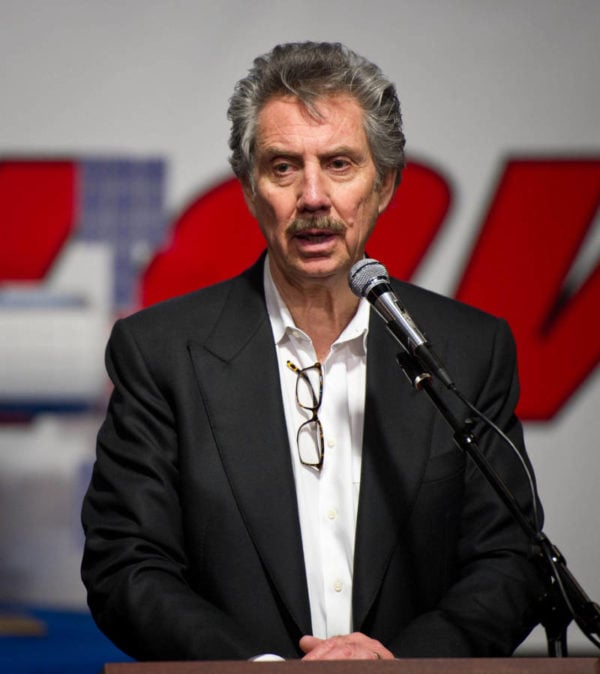 Wikimedia CommonsRobert Bigelow purchased the property three months after reading about the Sherman family’s paranormal experiences. Under the National Institute for Discovery Science, he tried to figure out what caused them.

“You talk to a lot of people around here that at one time or another have seen something they can’t explain,” Terry Sherman added. “There’s been a lot of cattle mutilations, and a lot of them weren’t reported. Several [ranchers] told me that when they had a [mutilation], they called the authorities and the authorities couldn’t do anything, so it was just a waste of time and effort.”

While some in the region adamantly believe the Shermans, no concrete evidence of their accounts has confirmed their stories. On the other hand, the family was supposedly so terrified of their property that they sold it just 18 months after moving in.

It only took three months for Las Vegas real estate giant and UFO enthusiast Robert Bigelow to take it off their hands for $200,000. This is when Skinwalker Ranch pivoted from being a UFO-centric place of interest to one of more earthly, demonic entities from Native American legend.

Stories Of The Mythical Skinwalker

Before he left the property, Terry Sherman reported seeing a wolf three times bigger than normal at one point. He shot it three times with a rifle at close range — to no avail. And after Bigelow bought the property under the National Institute for Discovery Science, things got stranger.

Biochemist Colm Kelleher said that on the night of March 12, 1997, he saw a big humanoid figure perched on a tree. It was observing the research team. 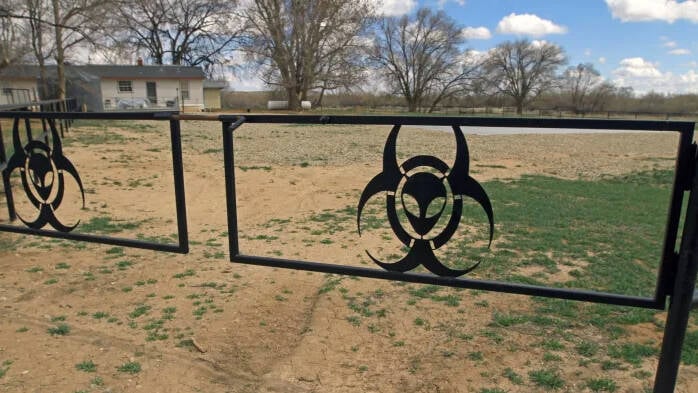 “The large creature that lay motionless, almost casually, in the tree,” Kelleher said. “The only indication of the beast’s presence was the penetrating yellow light of the unblinking eyes as they stared fixedly back into the light.”

Kelleher said he fired at the figure before it vanished, but not before he noticed how it looked. The shape had sharp claws and resembled a predatory bird. He said it looked heavy. This description and later reported sightings seemed eerily reminiscent of Navajo legend.

According to The Navajo-English Dictionary by William Morgan and Leon Wall, the word skinwalker in Navajo translates to yee naaldlooshii, meaning “by means of it, it goes on all fours.” The tribe is reluctant to discuss the legend with outsiders, making it all the more mysterious.

And with the ranch being 400 miles removed from Navajo Nation, the lack of answers made the sightings even more intriguing. 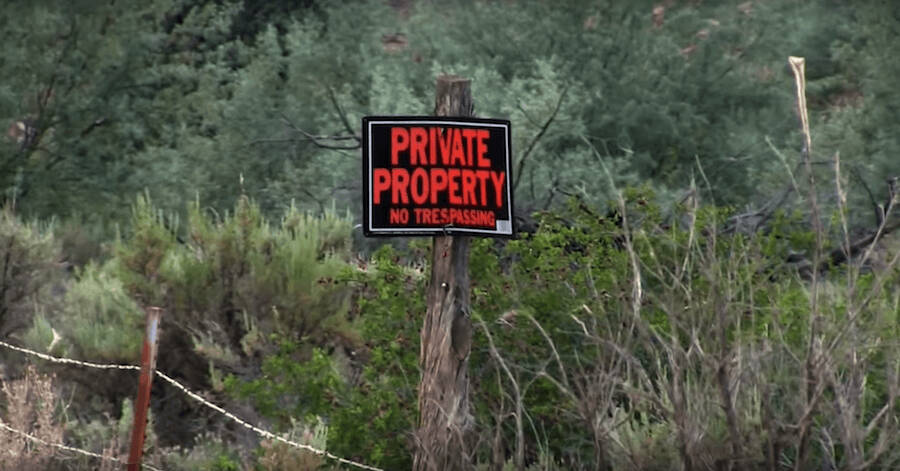 According to Clyde Kluckhohn’s Navaho Witchcraft, skinwalkers represent the opposite of Navajo values. While medicine men and healers of the tribe symbolize good, these shape-shifting witches represent evil.

Ultimately, Bigelow’s institute was intended to confirm or disconfirm the existence of these beings in the area by using modern equipment to garner evidence. Kelleher and investigative journalist George Knapp reportedly experienced nearly 100 incidents.

In the end, unfortunately, those involved admitted they had difficulty obtaining solid evidence. Bigelow sold the ranch to a company called Adamantium Real Estate Holdings in 2016. But according to VICE, research into the paranormal on Skinwalker Ranch has continued.

The Secret Of Skinwalker Ranch

The owner of Adamantium Holdings remains anonymous, though the History Channel aired a new documentary series in March 2020. As one might guess, the shadowy figure seems rather convinced that something is indeed regularly occurring in the region.

“You know, facing the reality of our mortality is sobering,” the mysterious owner told VICE. “The anomalies at Skinwalker Ranch, the things that have been reported there over decades, if not hundreds of years. They seem to attest to the fact that we live in a strange universe. Perhaps we are not alone.”

“I think the opportunity to take a living laboratory like the ranch, a place that seems to be the center of gravity of so much of the unexplained, it is a unique experience. I manage and lead an effort that I believe is the greatest science project of all time.”

A trailer for a 2018 documentary about the ranch, Hunt For The Skinwalker.

Today, the ranch’s scientific project is run out of the Command Center — a high-tech hub designed by plasma physicist Erik Bard. The property is wired with surveillance systems set up to catch any strange activity.

In the last few years, numerous people on the site have become sick with mysterious illnesses. And many employees at the ranch have had disquieting experiences — even the head of security.

“I thought it was all a bunch of crap,” he said of the legends. “Then, one night, I’m in one of the bedrooms in the ranch house. I’m lying down trying to get to sleep, and then all of a sudden, BAM, something slams into my bed. It’s like when your kids jump into bed with you or someone big kneed the bed. I sit up and turn on the lights. Nothing’s there.”

This is one of the many stories people who have visited Skinwalker Ranch have told. But what exactly is happening on the famed Utah property remains unexplained by science.

After learning about Skinwalker Ranch, read about the Montauk Project — the U.S. Military program that inspired ‘Stranger Things.’ Then, learn about the Dover Demon — the alien creature that once horrified a Boston hamlet.