While she was busy teaching, Sonia Sutcliffe's husband Peter Sutcliffe was terrorizing British women as the Yorkshire Ripper between 1975 and 1980.

Peter Sutcliffe murdered at least 13 women during his infamous 1970s killing spree in Britain. Known as the “Yorkshire Ripper,” he managed to evade authorities for years before finally being apprehended. His wife Sonia Sutcliffe, meanwhile, had absolutely no idea that her husband was a serial killer.

Indeed, when he wasn’t spying on prostitutes on the streets of Leeds and Bradford, Sutcliffe was establishing a seemingly decent life of his own, including finding a wife. 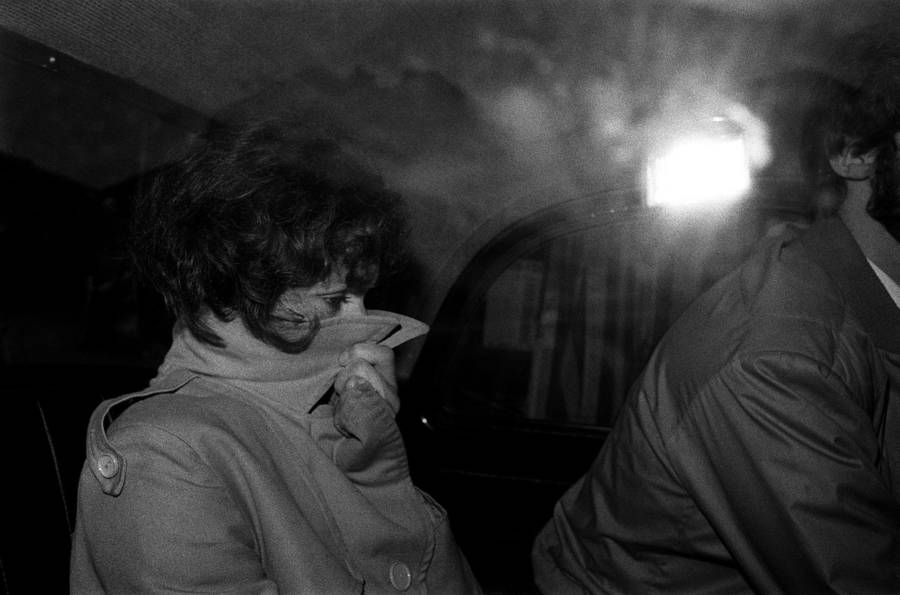 PA Images/Getty ImagesSonia Sutcliffe hides her face from the press while leaving the Old Bailey after her husband’s trial on March 20, 1981.

He was 21 years old when he met Sonia Szurma in 1967. They married in 1974, after which he acquired a truck driver’s license.

With a wife at home and a reliable job that allowed him to roam the streets, Sutcliffe’s obsessions were now able to expand — and worsen. Between 1975 and 1980, he killed at least 13 women and tried to kill seven more. 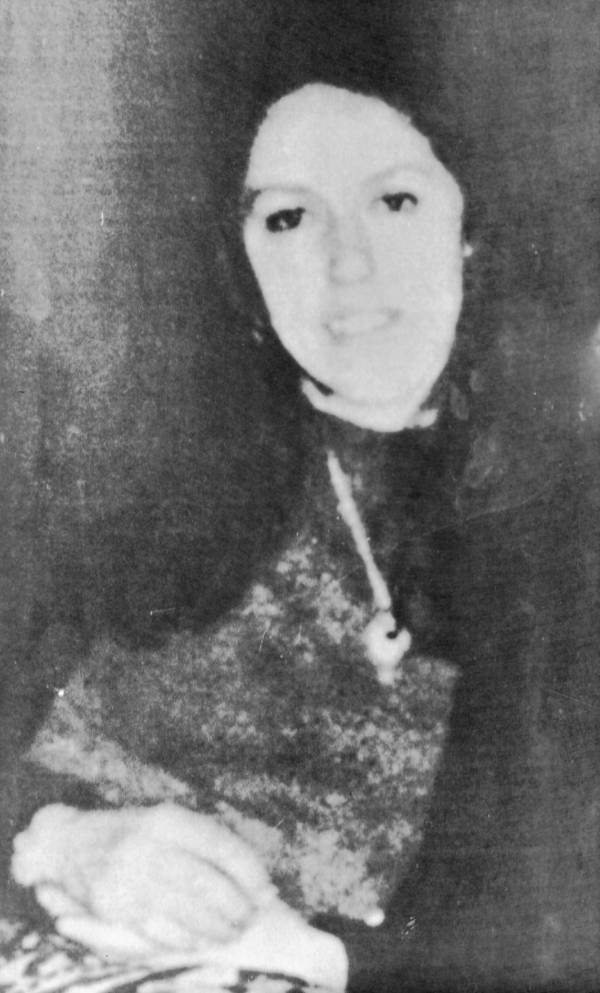 Bettmann/Getty ImagesA candid photo of Sonia Sutcliffe at a 1979 party in Bradford, England.

Yet Sonia Sutcliffe remained entirely ignorant of what her cold-blooded, murderous spouse was up to at night. Many have been left to wonder: How could she not have known, or at the very least suspected, that her husband was the infamous Yorkshire Ripper?

Sonia Szurma was born in 1951 to parents from Czechoslovakia. She first met her future husband during a disco night at a local pub. Her father prohibited the underage girl from going to the affair, but she wouldn’t listen. 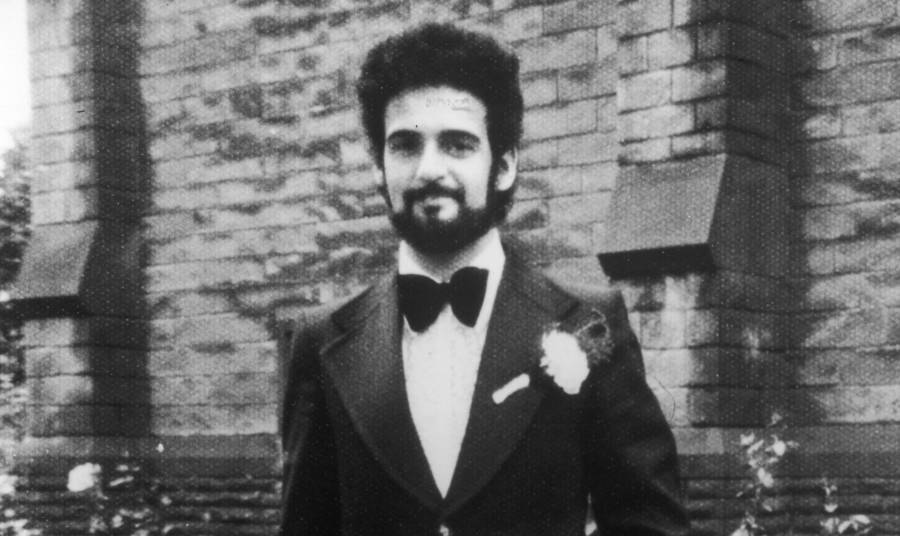 Express Newspapers/Getty ImagesPeter Sutcliffe, a.k.a. the Yorkshire Ripper, on his wedding day. August 10, 1974.

The 16-year-old had no idea that the charming truck driver she had just met was raping and killing women across the city in his spare time. Shockingly, she wouldn’t find out about it until he himself told her — while under arrest at the Dewsbury police station over a decade later.

Sutcliffe was studying to become a teacher when she was diagnosed with paranoid schizophrenia. She was described as short-tempered and constantly dissatisfied, while her husband-to-be even had to “contain her physically by pinning her arms to her side,” according to one author, during her common “unprovoked outbursts of rage.”

Not often seen photo of Peter Sutcliffe and Sonia on their wedding day. Pictured with them is the church registrar.

Posted by On the trail of the Yorkshire Ripper. on Tuesday, September 19, 2017

According to reporter Barbara Jones, who interviewed the Yorkshire Ripper’s wife in the mid-1980s, Sonia Sutcliffe was “the most irritating, strangest and coldest person I’ve ever met. She’s so incredibly prickly and demanding.”

But before Sutcliffe ever learned the truth about her homicidal husband, Peter Sutcliffe spent years terrorizing a quiet British town.

Sutcliffe’s killing spree began in 1975, one year after he married his wife — though his violent assaults on women began as early as 1969. He beat his first victim over the head with a rock-filled sock that year and then attacked three women with a knife and hammer in 1975.

He then moved on to actual murder, which earned him the name “Yorkshire Ripper” among the press.

Peter Sutcliffe’s motives have never been clarified, though some theorized that his brutal attacks stemmed from a bad personal experience with a sex worker. This, however, has never been confirmed. 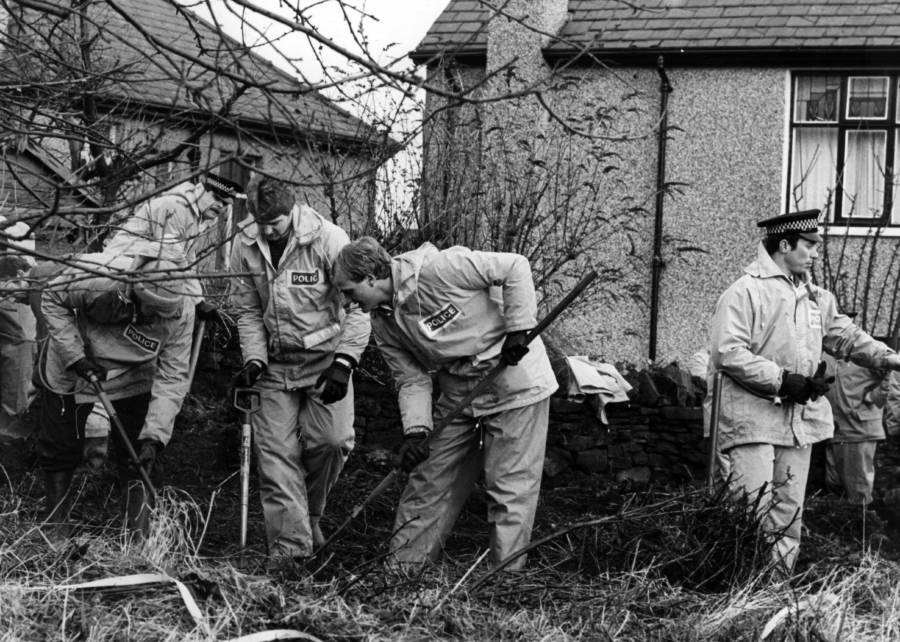 Andrew Varley/Mirrorpix/Getty ImagesPolice search the ground behind the home of Peter and Sonia Sutcliffe in Bradford following the killer’s arrest on January 9, 1981.

Sutcliffe almost always hit his victims with a hammer from behind before stabbing them to death. In 1975, Sutcliffe stabbed his first-known murder victim, Wilma McCann, 15 times in the neck and stomach. Her four children were sleeping soundly in the house merely 150 yards away.

In January 1976, he stabbed his second murder victim, Emily Jackson, nearly 50 times. He dragged her into a parking lot and killed her with a screwdriver. Sutcliffe then stomped on her so violently that he left a boot print on her body.

Sutcliffe’s violent and sexual attacks continued well into 1977 when the Yorkshire police finally began to suspect that they had a serial killer on their hands.

The Police Sniff Out The Yorkshire Ripper

More than 150 police officers contributed to the search for the Yorkshire killer, and still, Sutcliffe evaded them for years.

In 1977, the cops finally caught their first break when they found a five-pound banknote in the purse of one of his victims — Jean Jordan, a prostitute he mutilated and murdered. Police were able to trace the note back to the bank, which consequently narrowed their search down to around 8,000 people.

They interviewed 5,000 suspects, one of whom was Sutcliffe himself, but his alibi and the support of his wife Sonia Sutcliffe were credible enough for police to take him off their list. He subsequently attacked another prostitute two months later, named Marilyn Moore. Fortunately, she survived — and described her assailant to the police.

A 1980 BBC Newsnight segment on the investigation into the Yorkshire Ripper.

Sutcliffe was interviewed nine separate times in connection with the Yorkshire Ripper murders. Though witness descriptions and other circumstantial evidence did tie him to the killings, there was never enough evidence to arrest him.

Then, Sutcliffe was nabbed for drunk driving in April 1980. While awaiting trial, he managed to kill two more women and attack three others. That November, his acquaintance Trevor Birdsall reporter him to the police as a definite suspect.

On January 2, 1981, he was finally arrested. When two officers spotted Sutcliffe in his car with a 24-year-old prostitute, they ran his plates and found that they were fake. Once cops brought him down to the station for this offense, they noticed that his description matched that of the Yorkshire Ripper’s and began to dig deeper into his background. 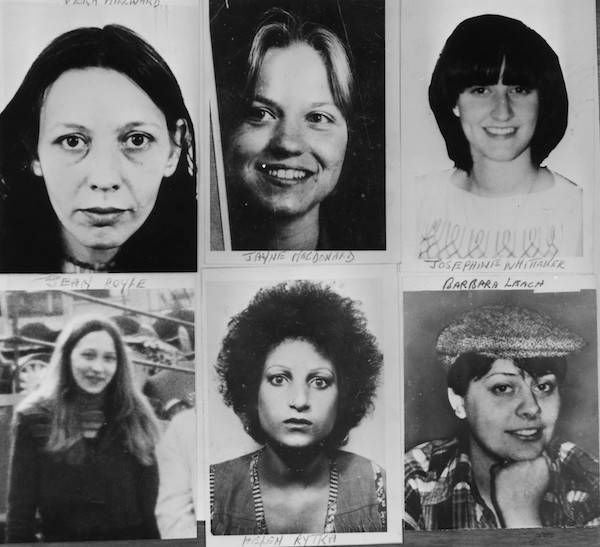 Keystone/Getty ImagesSix of the women murdered by Peter Sutcliffe.

The next day, the cops returned to the scene where they found Sutcliffe and discovered a knife, hammer, and rope that he had discarded while claiming he needed to slip away to pee. He hid a second knife in a police station toilet.

Cops strip-searched Sutcliffe and found that he was wearing a V-neck sweater under his pants, with the sleeves over his legs and the V leaving his genitals exposed for more expedient sexual assault. Police were convinced that this was their killer. After two days of interrogation, Peter Sutcliffe confessed.

Sonia Sutcliffe Learns The Truth About Her Husband

Sutcliffe recounted his crimes to the police in thorough detail, and by that point, they knew more than his own wife. Before he stood trial for 13 counts of murder, Sutcliffe finally admitted to his wife what he had done over the past seven years of their marriage. 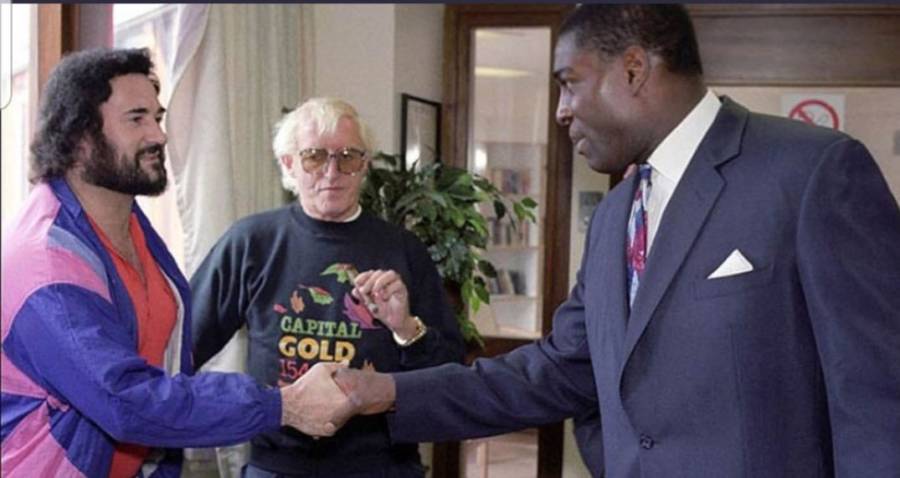 After Sutcliffe was brought to the station to speak with her husband, she allegedly asked, “What on earth is going on, Peter?”

“It’s me, I’m the Yorkshire Ripper,” he reportedly replied. “I killed all those women.”

“What on earth did you do that for, Peter?” She responded.

According to the Yorkshire Ripper himself, “She had no idea, not a clue. I never had any blood on me or anything.” He added that “There was nothing to link me, I was taking my clothes home and taking my clothes off and doing my own washing… She was deeply shocked when I told her. She couldn’t believe it.”

In the end, the jury was in a fair amount of shock, as well. Peter Sutcliffe was sentenced to life in prison 20 times over.

Peter Sutcliffe’s wife ultimately won close to $80,000 in libel cases while the Yorkshire Ripper’s victims or their families were awarded only $10,000 apiece.

In 1989, satirical magazine Private Eye was ordered to dole out damages worth nearly $800,000 for claiming that the Yorkshire Ripper’s wife was actively trying to profit off of her husband’s infamy. The magazine’s editor, Ian Hislop, was stupefied at the court’s decision.

“If this is justice I’m a banana,” he said at the time.

The publication appealed the decision and consequently had only to pay Sutcliffe $80,000 in damages.

“People have claimed to have interviewed me when the truth is they have not,” Sonia Sutcliffe later explained to the media. “There have been a lot of bad things written about me and they are not accurate. I would like the truth to come out one day but I am afraid to be extremely busy for the next two or three years.”

She remained largely silent on her relationship with the killer — until 2015.

Breaking The Silence On Her Husband And Netflix’s The Ripper 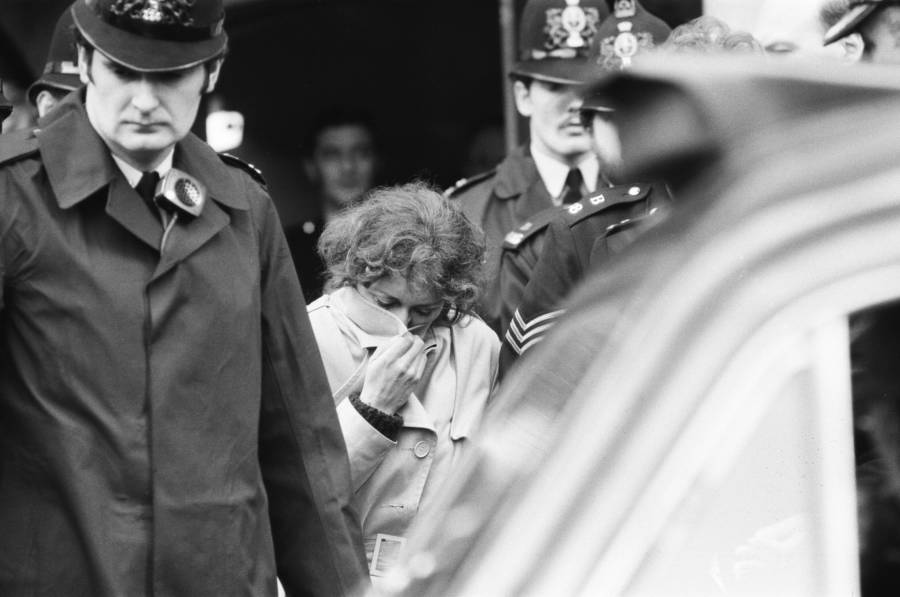 Brendan Monks/Mirrorpix/Getty ImagesSonia Sutcliffe in tears outside the Old Bailey during her husband’s trial. April 29, 1981.

According to The Daily Mail, Sonia Sutcliffe ended her decades-long silence on her relationship, marriage, and subsequent divorce from her husband in a 2015 interview with The Sun.

The divorcee had since remarried and had spent much of her time suing publications for defaming her in the press. Neighbors and locals knew she lived amongst them, but gave her a semblance of privacy — which the media certainly did not.

After remarrying in 1997, Sonia Sutcliffe seemed to attempt to remove herself from her ex’s shadow, that is, until the serial killer told the press in 2015 that Sonia’s new beau was jealous of their friendship. 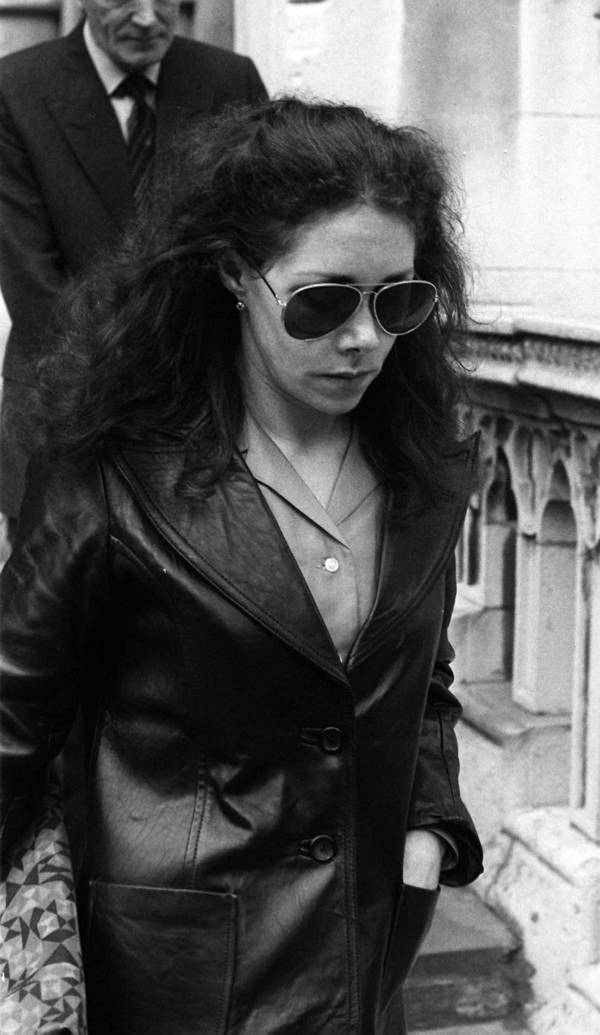 “Sonia still goes to see him occasionally although Peter has complained it is less often,” an insider claimed. “He thinks her husband Michael can’t accept they are still friends after all this time. He calls him jealous and insecure and blames him for coming between them.”

In the end, the simple truth of the matter seems to be that Sonia Sutcliffe isn’t interested in continuing her double life. Once the purportedly unaware wife of a mass-murdering maniac, now an older woman desperate for a quiet life — if ever there was a fork in the road, this would be it.

“Peter desperately wants her to come. She has refused to explain why she won’t visit and it has made him worse,” a source said. “But no one in Frankland has a lot of sympathy for him.”

The official trailer for Netflix’s The Ripper, which chronicles the bungled investigation into Sonia Sutcliffe’s husband.

In December 2020, Netflix will release a documentary on the crimes and bungled investigation into Sonia Sutcliffe’s husband the Yorkshire Ripper. She has thus far remained mum on the documentary, but she will likely play a large role in it.

Sonia Sutcliffe visited her ex-husband at Broadmoor Hospital in Berkshire in 2015 but reportedly hasn’t seen him alive since. The Yorkshire Ripper was transferred from Broadmoor to Durham’s Frankland Prison in 2016, where he died in November 2020. Sonia Sutcliffe reportedly held a private funeral for his ashes shortly afterward.

After learning about Peter Sutcliffe’s wife Sonia Sutcliffe, read about Pedro Rodrigues Filho, the real-life “Dexter” who killed other criminals. Then, learn about Leonarda Cianciulli, the serial killer who turned her victims into soap and teacakes.