When most of us think of the forest, we think of a tangle of fear and bugs. But Spencer Byles sees a canvas. 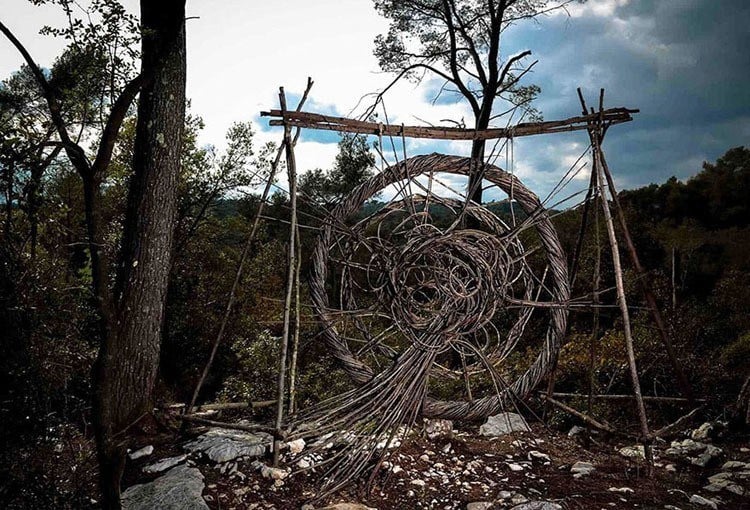 For most urbanites, it’s hard to see the forest as anything other than a tangle of dirt, bugs and mess. But where we see fear, artist and sculptor Spencer Byles sees a canvas. Indeed, Byles spent a year in three unmanaged French forests, where he utilized only natural and local materials to create amazing works of art amid the living landscapes. 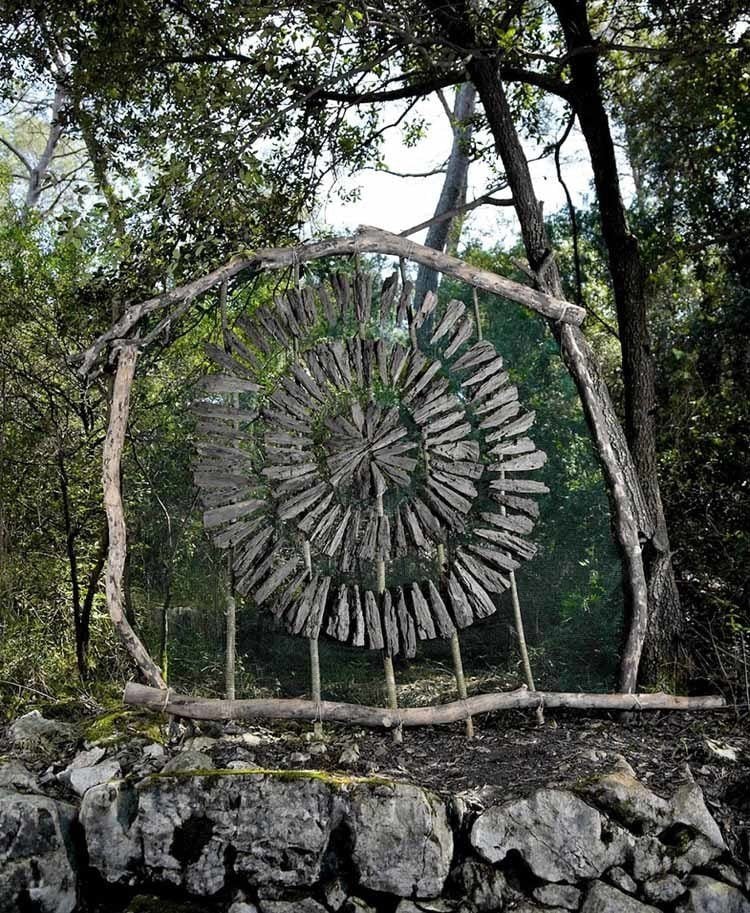 Blending seamlessly with the environment, there is no map or itinerary to find these surreal works of art. Your only means of seeing any of these pieces in person is to wander one of the three forests–La Colle Sur Loup, Villeneuve Loubet and Mougins, respectively–and stumble upon them. 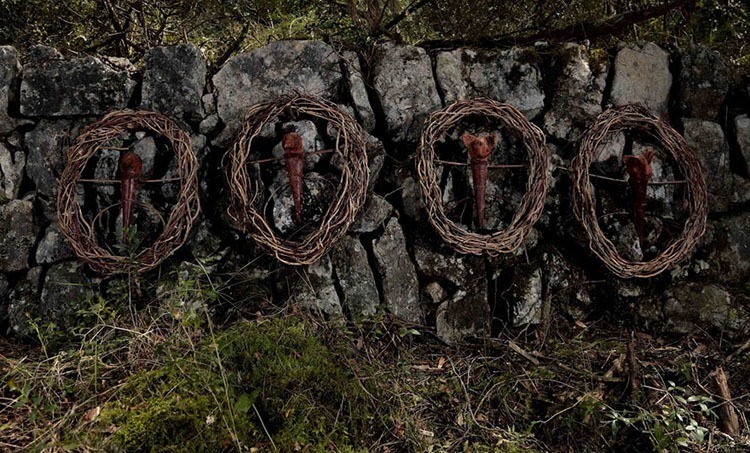 Byles’ secretive installations are done for a specific purpose, not just artistic pretension. In his eyes, not disclosing where his works are keeps the area from being invaded, and the forest from suffering the effects the human public would leave on the living canvas. 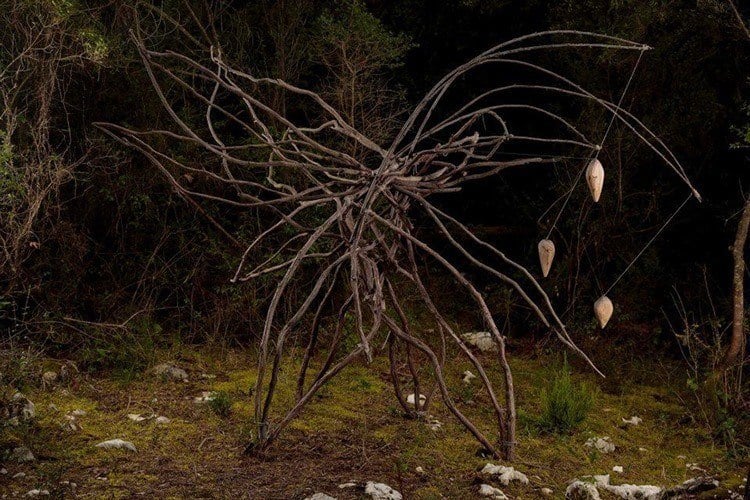 Tapping fully into the circle of life, part of the works’ beauty stems from its temporal nature. Over time, the forest will gradually recapture the structures and Byles’ physical imprint on his surroundings will be lost. 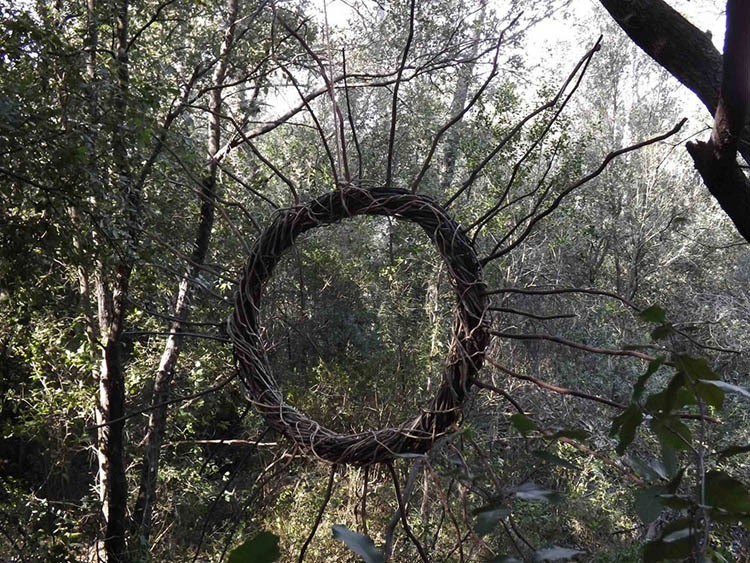 Byles recently spoke to Bored Panda about his process and art. “I had been making sculptures with found materials in forests at different times over 10 years,” Byles says. “I felt I needed to concentrate on one large project and produce good quality photographs of each sculpture…I set out with no particular plan and had no expectation how it might evolve. I responded in different ways to each location and worked on at least 20 sculptures at one time. I worked spontaneously without any drawings or planned design.” 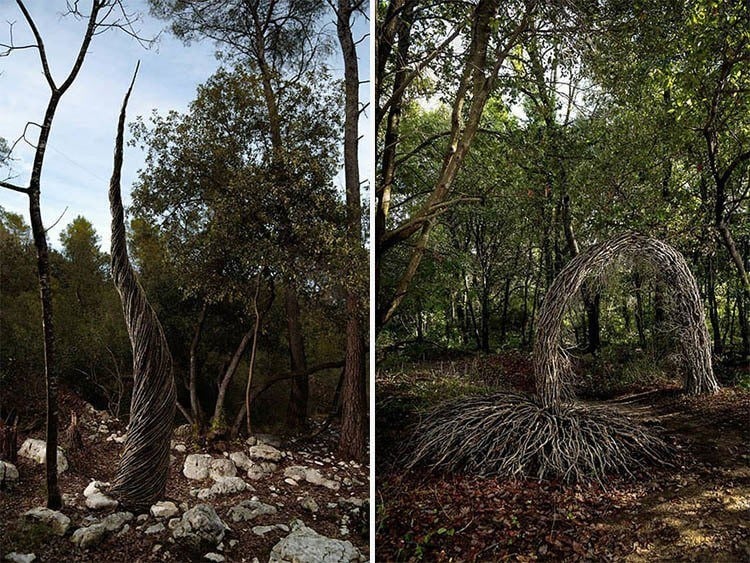 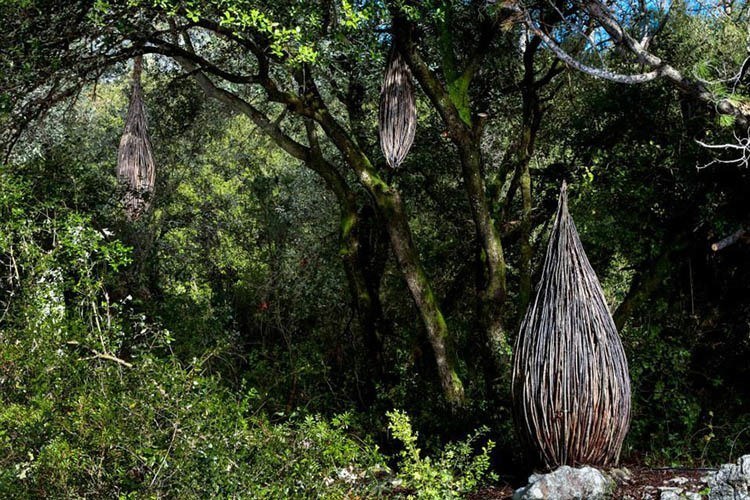 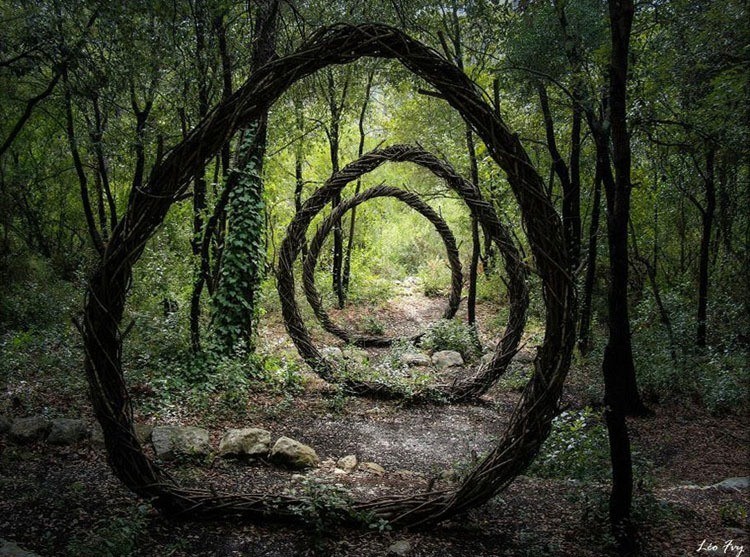 Paralleling his lack of disclosure on his works’ physical location, Byles is equally fine with not sharing his views on his art’s meaning. “I prefer not to share my thoughts in regards to what each sculpture represents to me. They don’t have names either. It’s up to the viewer regards what he or she might feel or see.” 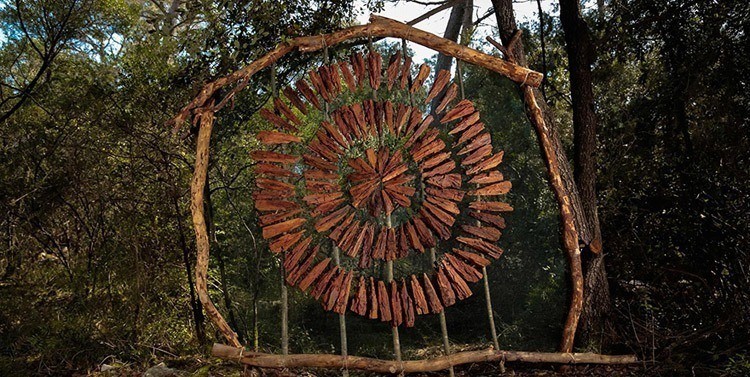 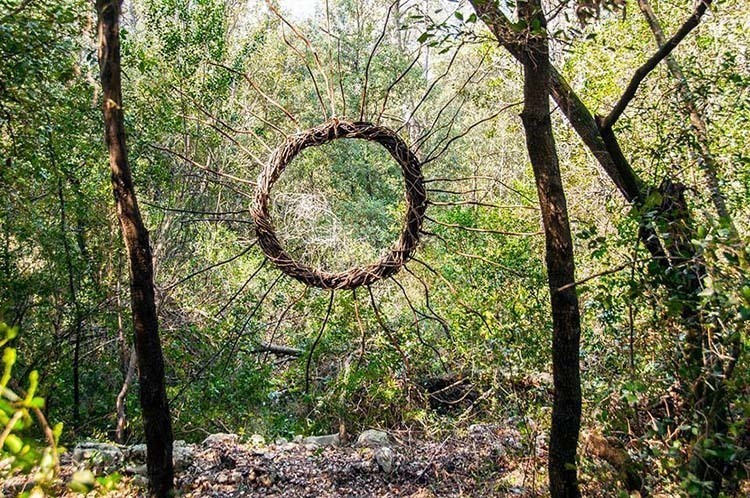 Given the fact that his materials couldn’t be found in an art store, one might think that a project as elaborate as this would pose a number of challenges. But in Byles’ eyes, this simply isn’t the case. “It’s a dream,” he said. “There are irritants like mosquitoes and the heat during July and August where I slow down. The winters are mild and I construct large canopy shelters in many places to shelter in from heavy rain. But this is all part of the experience.” 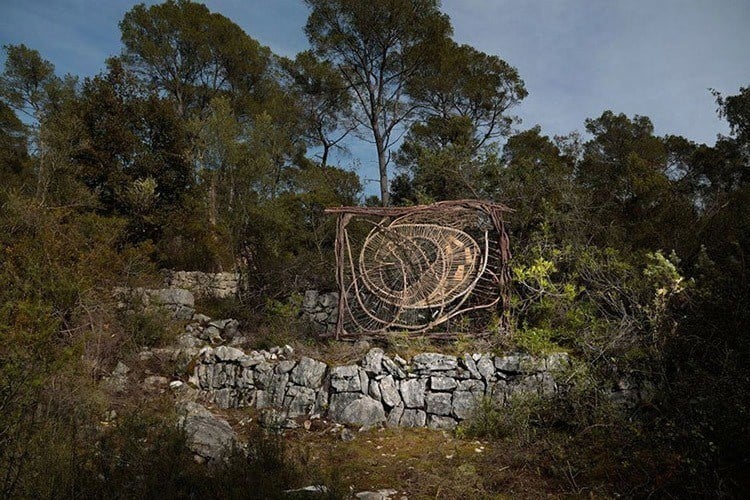 The hardest part was working alone each day for the whole year. “I am a very social person but within a short time I began to enjoy and really value the long days alone in the nature,” he mused. 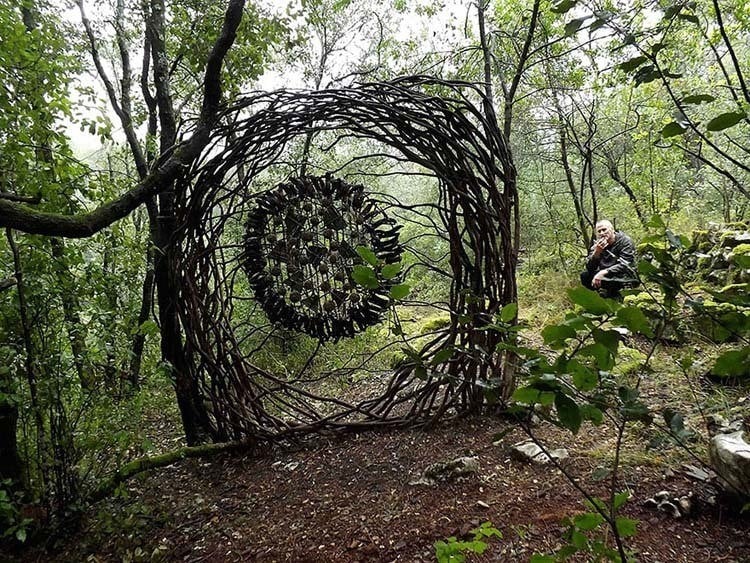 Of course not every material used was natural, but everything was found at the specific location. “In the forest in La Colle Sur Loup I found many objects hidden, often only by a thin layer of soil sometimes. Bales of wire and old rope which had been buried there from flower growers and farmers who seen the forest as a place to discard their rubbish.” 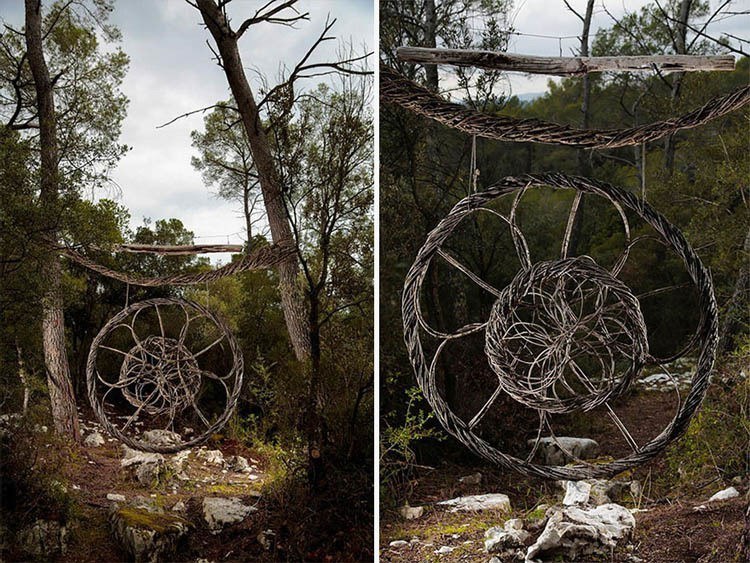 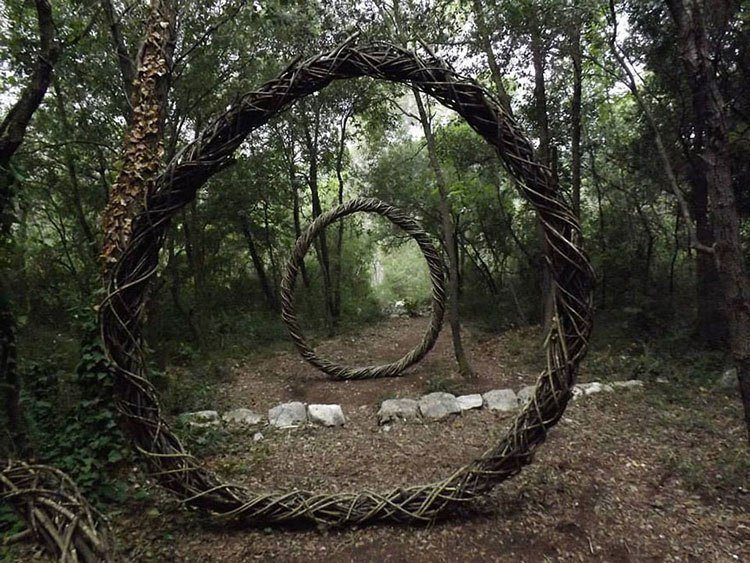 And yet, in spite of the labor and isolation, Byles is seldom satisfied with his work. “I don’t feel the work really sits that comfortably within its surroundings until nature begins to reclaim it. It becomes less of a part of me and more a part of nature. I work in a ‘living’ environment that’s constantly changing. You are witness to both the growing and dying back of all the plants and trees. It’s slow but the more time you spend in nature the more you recognize this constant movement.”

If a trip through the forests of France is not in your immediate future, you can find many more images of all his varied sculptures at Spencer Byles’ website and on his Facebook page.