They’re All Out to Get You: Debunking The Chemtrail Conspiracy 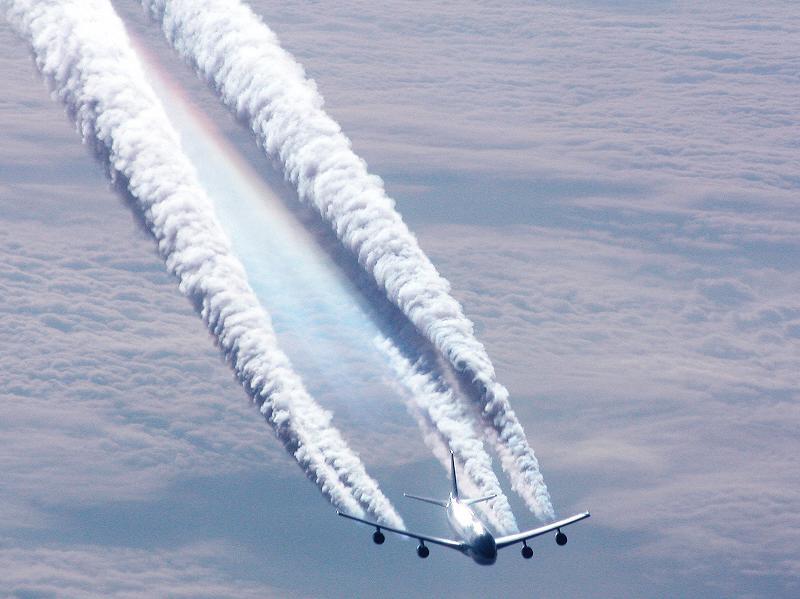 For several generations, humans living in prosperous Western countries have generally had more than enough to eat and no giant predators to fight off. You’d think this would make us calm and happy, but the truth is that the nimble human brain is a problem-solving machine. Deprive it of major problems, and it reacts by either blowing small things out of all proportion or making up problems out of whole cloth.

Chemtrails are mostly of the “whole cloth” variety, though they—much like many of their proponents—sometimes manage to retain a tenuous contact with reality.

First off, let’s get what these trails actually are out of the way. Both jet and piston-driven engines produce waste heat and exhaust gases as an unavoidable consequence of burning fuel to produce the rotary action that drives them. In a jet engine, air enters through the front intake and is mixed with jet fuel, which is basically kerosene. That mixture is highly flammable, so it burns hard when it passes into the reaction chamber. Hot gases expand, and the engine’s configuration prohibits the gas from escaping back the way it came in, so the gas erupts out the back of the engine and produces thrust. Naturally, this waste air will be hot, and it will also be humid because of the chemistry of the reaction it’s just been through. 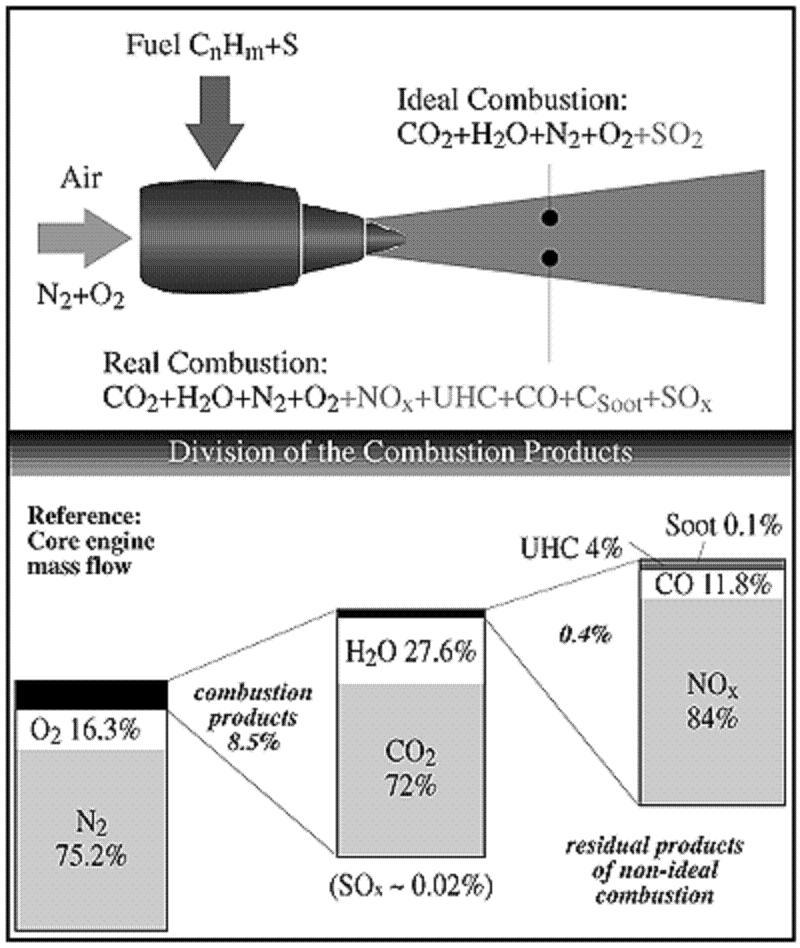 As the above diagram shows, the air going in through the front is almost entirely nitrogen and oxygen, which makes sense because that’s 99 percent of the atmosphere. Kerosene, which is a complex hydrocarbon (read: hydrogen and carbon) is then mixed with the air and burned. Ideally, all of the kerosene would burn and everything would be nice and clean. In the real world, what comes out the back end is a lot of carbon dioxide and its toxic little brother carbon monoxide, which is a result of incomplete combustion. Less-than-ideal burning also produces nitrous oxide and carbon soot. Note how, even in an ideal burn, huge amounts of dihydrogen monoxide (a.k.a. “water”) is produced.

Most jets fly between 15,000 and 40,000 feet, where the surrounding air is generally very cold. Hot steam emerging from the exhaust vents of an engine quickly freezes and begins to disperse. While warm water vapor tends to dissipate quickly in dry air (when the sky is very dark blue), it can linger for several minutes in humid air (which tends to be a lighter shade of blue). Think of the difference between car exhaust on a dry summer day versus a cold, wet winter morning.

The steam lasts far longer when the air is already saturated with moisture. Ice crystals, however, are somewhat more resistant to evaporation, which is why high-altitude flights (where the air is coldest and ice forms fastest) tend to leave contrails that linger, spread out, and sometimes form sheets of ice clouds by themselves. This effect is so common that, during the week after 9/11, when civilian air traffic was grounded nationwide, North America’s average temperature rose by a couple of degrees because of the diminished cloud cover. 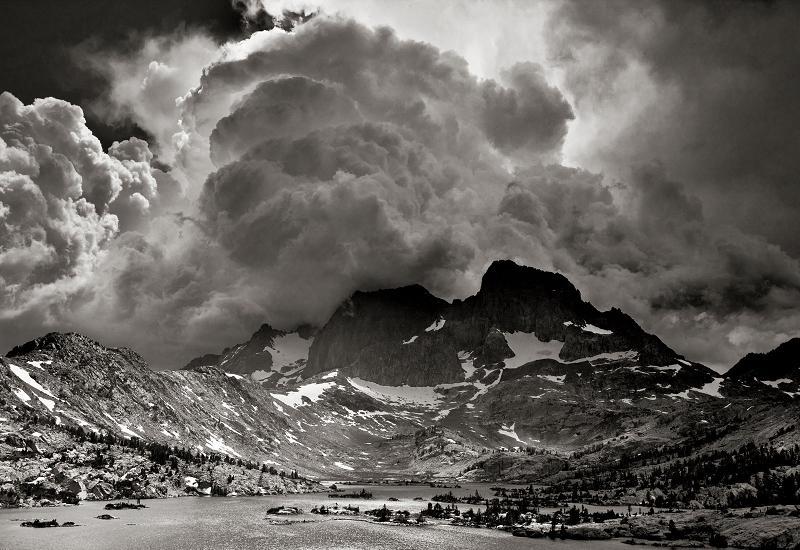 So, what is supposed to be in these chemtrails? What are the chemicals being sprayed all over us to make us sterile or hyperfertile or to mess with the weather or whatever? Here is an article by somebody named Lorie Kramer, who seems terribly upset about something but never comes out and explains just what chemical spraying is supposed to accomplish. A brief excerpt:

These are all pieces of very destructive puzzles. The populous [sic] is being lied to, the ecosystems are being destroyed, and meanwhile nothing is being done to address the problem.

One of the site’s highlights is an alleged analysis of rainwater that is supposed to show traces of the mysterious and no doubt evil chemicals. Here’s the report: 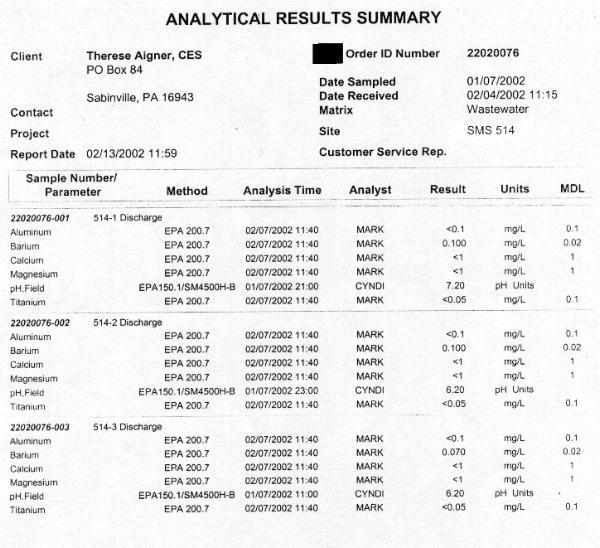 The first thing to notice in this report is in the upper-right corner. Apparently the lab took delivery of this water around a month after it was collected. That’s a full month during which the water may have been contaminated and chemicals in the sample may have decayed or recombined to form new compounds while the sample was kept under god knows what conditions. This kind of sloppiness is typical of “citizen scientists” who do this sort of thing.

Anyway, look at those results. “Scientists” tested the sample’s pH levels, along with the presence of aluminum, barium, calcium, magnesium, and titanium. The results are expressed in mg/L, which is basically parts per million. The far-right column, labeled “MDL,” indicates the “Method Detection Limit,” which is the minimum amount of something that has to be present before the test can find it. This test, for example, is sensitive enough to find 1 part per million of calcium, and 1 part per 10 million of aluminum. Now look again at the amounts actually found in the sample: 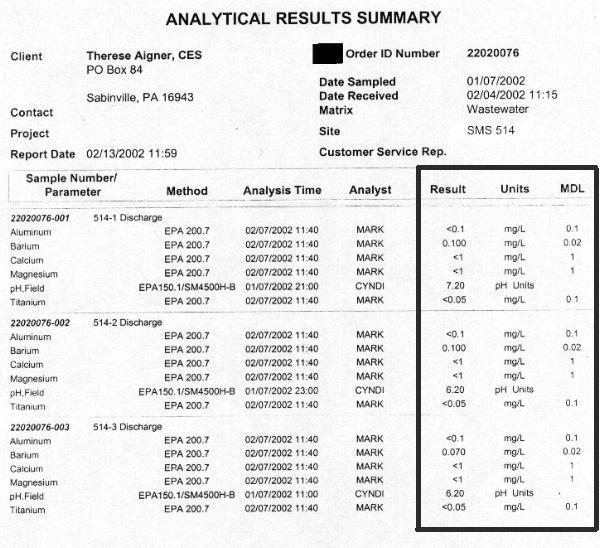 Four of the five contaminants being tested for came in under the detection threshold, and the fifth, barium, is present at around half the concentration the EPA considers safe for tap water. Ironically, rain should have more aluminum in it, as it’s the most abundant metal in the Earth’s crust and is routinely swept into the air in dust. Speaking of tap water, it’s likely that that’s just what this is, as rain usually has a pH of between 5 and 5.6, and this stuff is far more alkaline than that. Whoever collected this “rain” might want to get a new water softener installed, preferably one that doesn’t use barium chloride as a treatment agent. 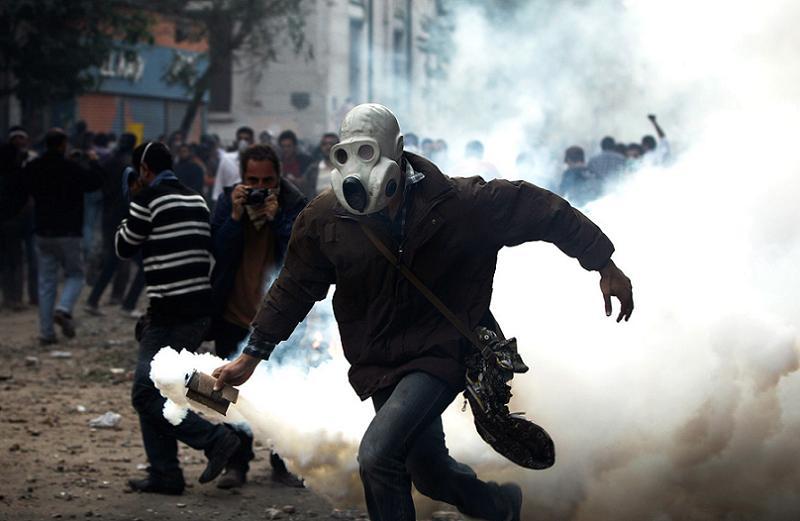 Okay, so what do chemtrail enthusiasts suggest we do about this nonexistent threat? I mean, people who believe in chemtrails, including Billy Corgan of all people, believe they live in a country whose government is actively spraying poison on their children. Surely they must have some plan of resistance, right? Can we at least impeach somebody?

You betcha. There’s a whole group of people who aren’t taking this nonexistent threat lying down, but who are boldly marching out into their own backyards and spraying a small amount of vinegar at clouds five or six miles overhead. Don’t believe anyone can be stupid like that? Here’s a video:

At 1:22, the woman spraying vinegar into the air mentions that she’s been rebuking Satan in the same casual tone most people use for talking about the morning’s trip to the gym.

What makes this funny is that household vinegar is 95 percent identical to the chemtrails it’s supposed to be dispersing. That is, the kind of vinegar you buy at the store is 95 percent water by volume and 5 percent acetic acid. Ironically, the water is more volatile than the acid, so it evaporates quickly and makes the air (infinitesimally) more humid. The acetic acid just settles on the lawn, which might explain the weeds. Here’s another video:

Those two videos were made by different people in different states, and they were uploaded two years apart, so this vinegar thing isn’t just one illiterate person’s cargo cult solution to the chemtrail dilemma; apparently it’s become folk wisdom among people whose retirement planning involves Lottery tickets.

Even worse than the spectacle of ordinary-looking citizens of First-World societies spraying vinegar into their own eyes is the prospect of what these homeowners, consumers, voters, and members of your local jury pool must think of the country they live in. Remember, chemtrails are supposed to be poisonous to humans, destructive to the environment, or some horrible combination of the two. Any government doing what chemtrailers seem to think our government does every day would be a thousand times worse than the most evil dictatorships in history. What do these people see when they look out the window? What is their reaction to a new education initiative announced by the President?

It appears that some people really are able to go to work and send their children to school in a society whose leaders are allegedly poisoning the air we all breathe. To date, nobody has ever launched a shooting rampage over this issue. Nobody has tried to assassinate the officials responsible for it. Apart from that Clifford Carnicom guy, nobody is even trying to apply pressure to the system to get some answers to what they imagine are hard questions.

Holding two mutually exclusive propositions in the mind while managing to believe both is a bizarre cognitive disorder called doublethink. Believing that the all-powerful secret government is spraying you with toxic chemicals on a daily basis, and also that you can’t afford to miss tonight’s Celebrity Apprentice, is somehow even weirder than that.