Until the foundation of Alexandria, Thônis-Heracleion served as Ancient Egypt's largest port city on the Mediterranean Sea, where Greek merchants dominated trade. 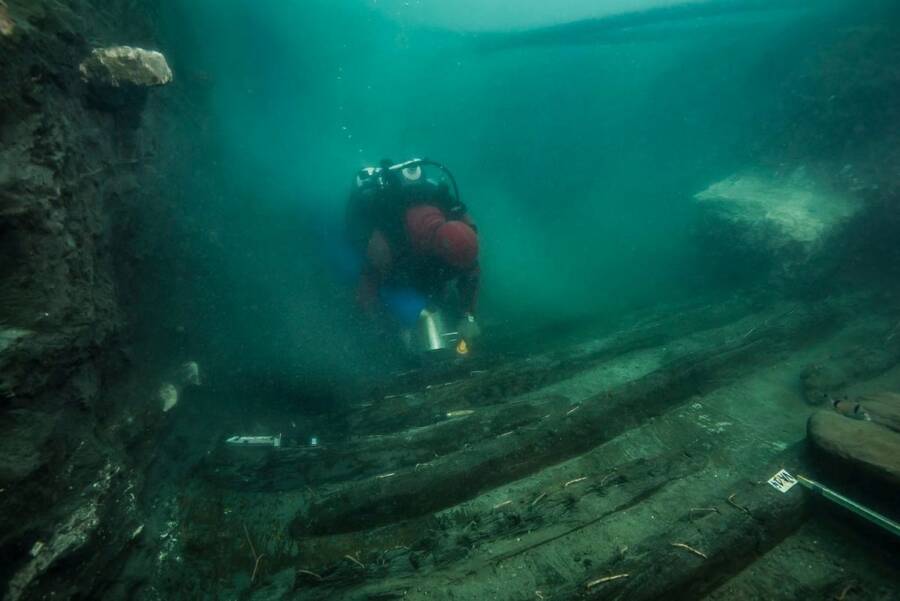 Egyptian Ministry of Tourism and AntiquitiesThe 2,200-year-old vessel was flat on the bottom and spanned 82 feet.

Divers off the Mediterranean coast of Egypt have just discovered the remarkable remnants of an Ancient Greek military vessel. The ship was wrecked in the second century B.C. and hasn’t been seen for thousands of years — as it lay hidden in the ruins of a sunken city called Thônis-Heracleion.

The submerged port city once controlled entry to Egypt and regulated trade on the western part of the Nile Delta. However, when the city’s colossal Temple of Amun collapsed, researchers believe that debris tore through the ship, which was moored below, causing it to sink and trapping it underwater.

But that wasn’t the only discovery underwater archaeologists made at the site this month. Divers also found a Greek funerary complex dating back to the fourth century B.C. at the bottom of another canal nearby.

The European Institute for Underwater Archaeology (IEASM), which led the excavations, says these twin discoveries shed new light on the intricacies of Ancient Egypt’s contemporary culture of trade. 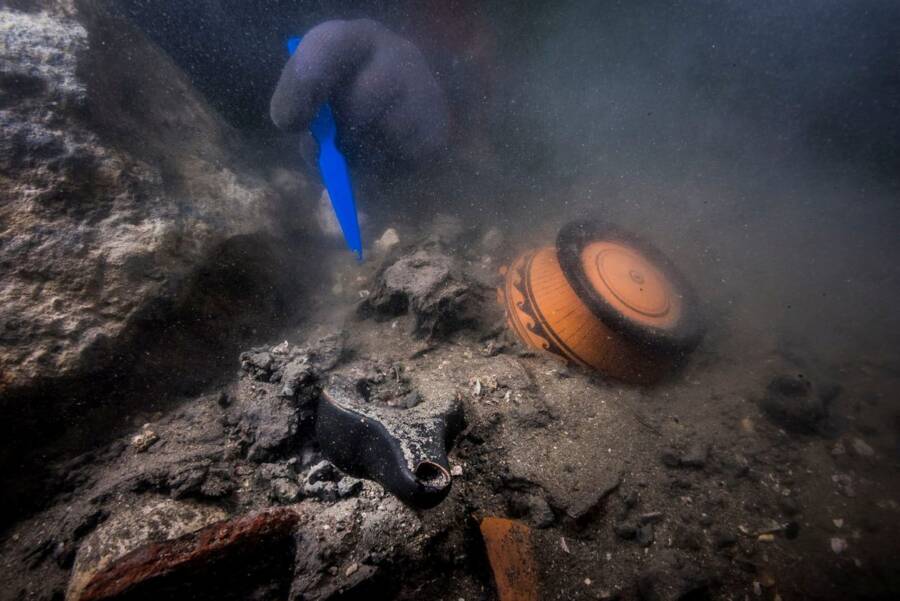 Egyptian Ministry of Tourism and AntiquitiesDivers at the wreckage site in the sunken city of Thônis-Heracleion.

Thônis-Heracleion was Egypt’s largest port on the Mediterranean for centuries before it was surpassed by Alexandria, which Alexander the Great founded in 331 B.C.

Egyptians built Thônis-Heracleion on a series of islands that once sat in Abu Qir Bay, just north of Alexandria. The Greeks settled in Thônis-Heracleion during the tail-end of the Pharaonic dynasties, establishing their own religious hubs near the Egyptian Temple of Amun, Ancient Egypt’s supreme god.

According to Smithsonian Magazine, the temple collapsed around 140 B.C. Still, Thônis-Heracleion remained for another 1,000 years, until a series of earthquakes and tidal waves in the eighth century destroyed the island city as a result of ground liquefaction. In the end, a 42-square-mile area of the Nile Delta sank into the sea.

Thônis-Heracleion vanished from sight for 1,200 years — until its rediscovery in 2001. 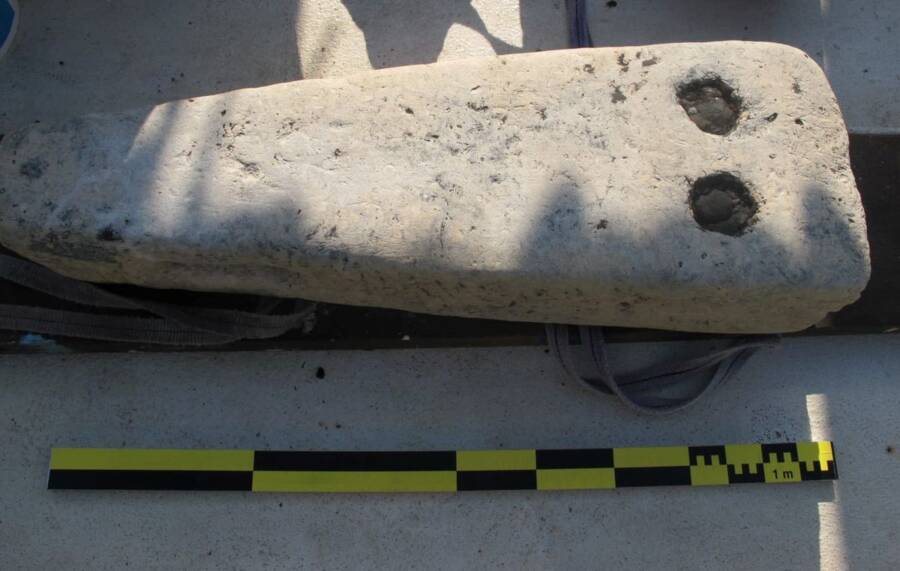 Egyptian Ministry of Tourism and AntiquitiesIt’s believed the ship was loading stone blocks such as this when the earthquake hit — and saw the cargo sink the vessel.

That’s when underwater archaeologist Franck Goddio and his team found the city’s ruins 4.3 miles off Egypt’s coast. Goddio explained that archaeologists discovered the military vessel in a former canal that ran along the southern facade of the Temple of Amun.

Ayman Ashmawy, head of the Egyptian Antiquities Sector of the country’s Ministry of Tourism and Antiquities, noted it was only found “thanks to cutting-edge prototype sub-bottom profiler electronic equipment.”

Divers uncovered the ship beneath 16 feet of hardened clay and temple remains, and researchers believe that it sank when the stone blocks tore through the deck. Fortunately for historians, it is precisely because of these blocks holding the vessel down to the seafloor that the ship was kept secure for the last 2,000 years.

The ship was built in the classical Greek style with a large sail, flat bottom, and oars, allowing it to navigate the shallow waters and often windless Nile Delta. Significantly, researchers also found traditional Egyptian shipbuilding construction methods and reused wood, indicating that it was actually built in Egypt. 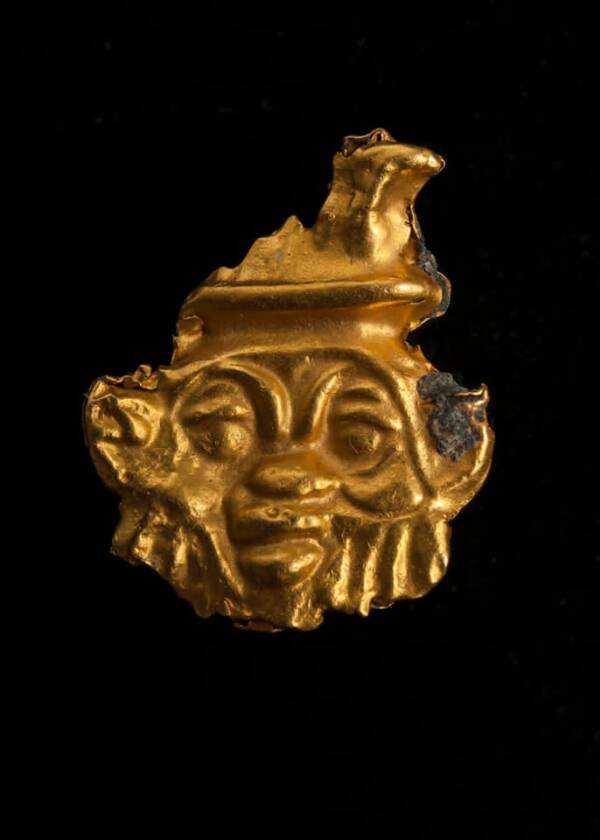 “Finds of fast ships from this age are extremely rare,” Goddio said. To date, only one other comparable ship has ever been discovered from the era.

The further discovery of the Greek funerary complex yielded riches of ancient merchants and dated back to the early years of the fourth century B.C., including a golden mask. Greeks had been permitted to settle in the region as the Pharaonic dynasties of Egypt came to an end, and the discovery confirms their power here.

“This discovery beautifully illustrates the presence of the Greek merchants who lived in that city,” the Egyptian Ministry of Tourism and Antiquities said in a statement.

“They built their own sanctuaries close to the huge temple of Amun. Those were destroyed, simultaneously and their remains are found mixed with those of the Egyptian temple.”

After reading about the Ancient Egyptian military ship discovered in the Mediterranean, learn 44 Ancient Egypt facts that separate myth from truth. Then, read about the mystery of Ancient Egypt’s noseless statues.