Flintlock bullets were found buried alongside the victims, suggesting they were shot to end their suffering — or as punishment for breaking the rules during the epidemic. 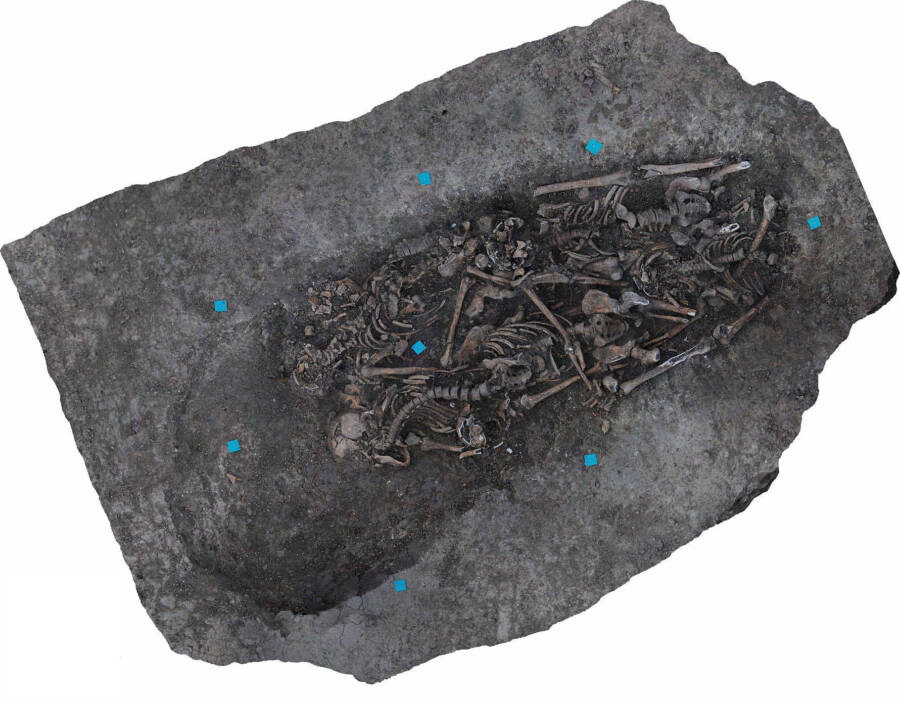 University of West TimisoaraThe grave contained the remains of seven individuals, one of which was a child carrying two Christian artifacts.

Archaeologists in Timisoara, Romania have unearthed a mass grave dating back to between 1737 and 1740, containing the remains of six adults and one child. According to Romania Insider, the dead are believed to have been victims of a major plague outbreak in Timisoara.

Discovered on the building site of a future school campus, the grave also contained some rather interesting Christian artifacts. According to Archaeology, the child was found carrying a Cross of Lorraine, which has two horizontal bars, and a pendant depicting two saints of the Franciscan Order.

Both Saint Elzear and the Blessed Delphina were known as the patrons of newlyweds, lepers, and the poor. It was the latter pendant that helped experts date the grave, as Delphina was only beatified in 1694 — which overwhelmingly suggests this group of seven died during the 1730s epidemic. 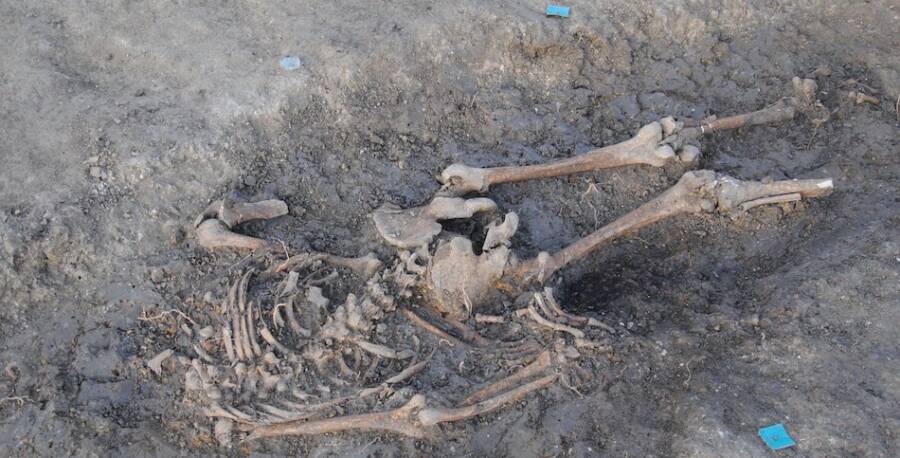 University of West TimisoaraFlintlock bullets were found buried alongside the victims, suggesting they were shot to end their suffering — or as punishment for breaking the rules during the epidemic.

“The pendant that illustrates them is important for our discovery,” said archaeologist Andrei Stavila. “This is because the tomb cannot date back to 1694, which is known to be that of the beatification of Delphina, and the information that the two are patrons of lepers is important to our hypothesis.”

Since flintlock bullets were found in the grave, as well, the University of West Timisoara research team is now trying to find out if the seven plague victims were shot, what brought them to Timisoara, and if they were related.

“We believe they died during the worst epidemic, which remained for a long while in the collective memory and forever in the written one, namely the plague that swept Timisoara between 1737 and 1740,” said archaeologist Andrei Stavila. 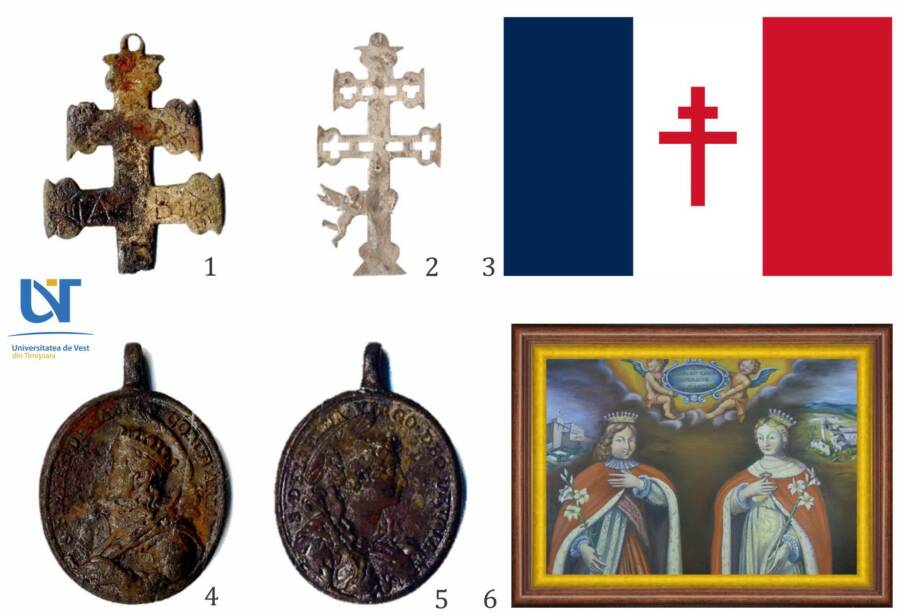 University of West TimisoaraThe Cross of Lorraine (1, 2) suggests the group were colonists from the French region, while the pendant of Saint Elzear and the Blessed Delphina (4, 5) helped experts date the burial.

Though it remains yet unclear whether or not the group of seven were shot, the bullets certainly make a strong case for it. The team most recently speculated this may have been done “to bring an end to their suffering or for not following the rules the authorities introduced during the pandemic.”

The experts believe the victims were likely colonists who traveled to Timisoara from the French region of Lorraine, as suggested by the cross. As for the theory they died of the 1737 plague, it was the pendant placing them in that particular era — and the mass grave suggesting they were victims of it.

Stavila explained that these settlers weren’t the only ones in Timisoara to experience the devastating ravages of a plague. Timisoara, the third-largest city in Romania, is not only the main cultural and economic center of the western part of the country but one that’s been repeatedly plagued by illness. 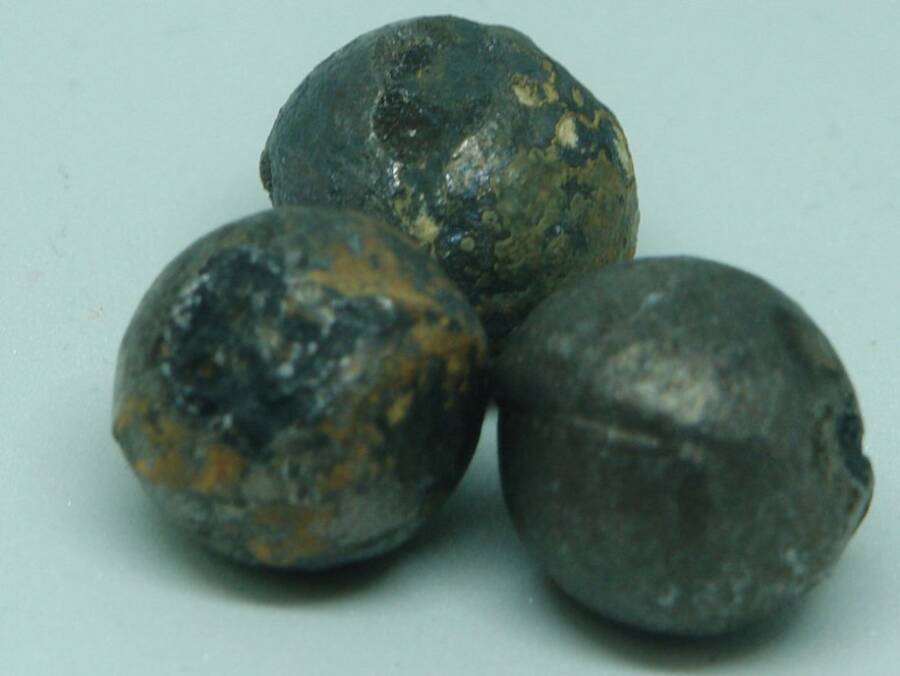 University of West TimisoaraWhile it remains unclear whether or not the buried were shot, or died from the plague itself, the former theory is currently under serious consideration.

From typhus and the plague hitting the town during Ottoman rule from 1552 to 1716 to the various epidemics sweeping the city during the Habsburg rule between 1716 and 1860 — Timisoara has a long history of disease.

Ultimately, Stavila and his peers have posited some fascinating theories with historically sound underpinnings to what they’ve encountered — but have several questions they hope to answer with further research in the near future:

“They were shot. Certainly, but why? Was it the child’s fault? Did the seven form a family? What was the context of their disappearance?”

After learning about the 18th-century mass grave dating back to a devastating plague unearthed in Romania, read about the Medieval dancing plague of 1518 — when getting down literally killed you. Then, learn about archaeologists finding two male victims of the Black Death holding hands in a shared grave.